Eva Bernard was born in April 1915 in Nuremburg, Germany. She was one of two children of liberal Jewish parents. They supported her education as an architect, which she commenced in 1933 at a technical university in Munich. There she met Hugh Buhrich, who was also studying architecture. Difficulties with the Nazi regime forced their move to Berlin where they studied under Hans Poelzig. Eva then moved to Switzerland where she completed her diploma in architecture in 1937 at the technical university in Zurich under Otto Salvisberg. [media]Hugh completed his degree at Danzig. After graduating, they met up in The Hague and moved to England, where they married in 1938. Although Eva had been awarded a scholarship to conduct postgraduate research on schools and education, Hugh insisted that with the threat of an approaching war, they must emigrate to a distant part of the world. The 'landing fees' demanded by the Australian government were gathered for them by architect friends. 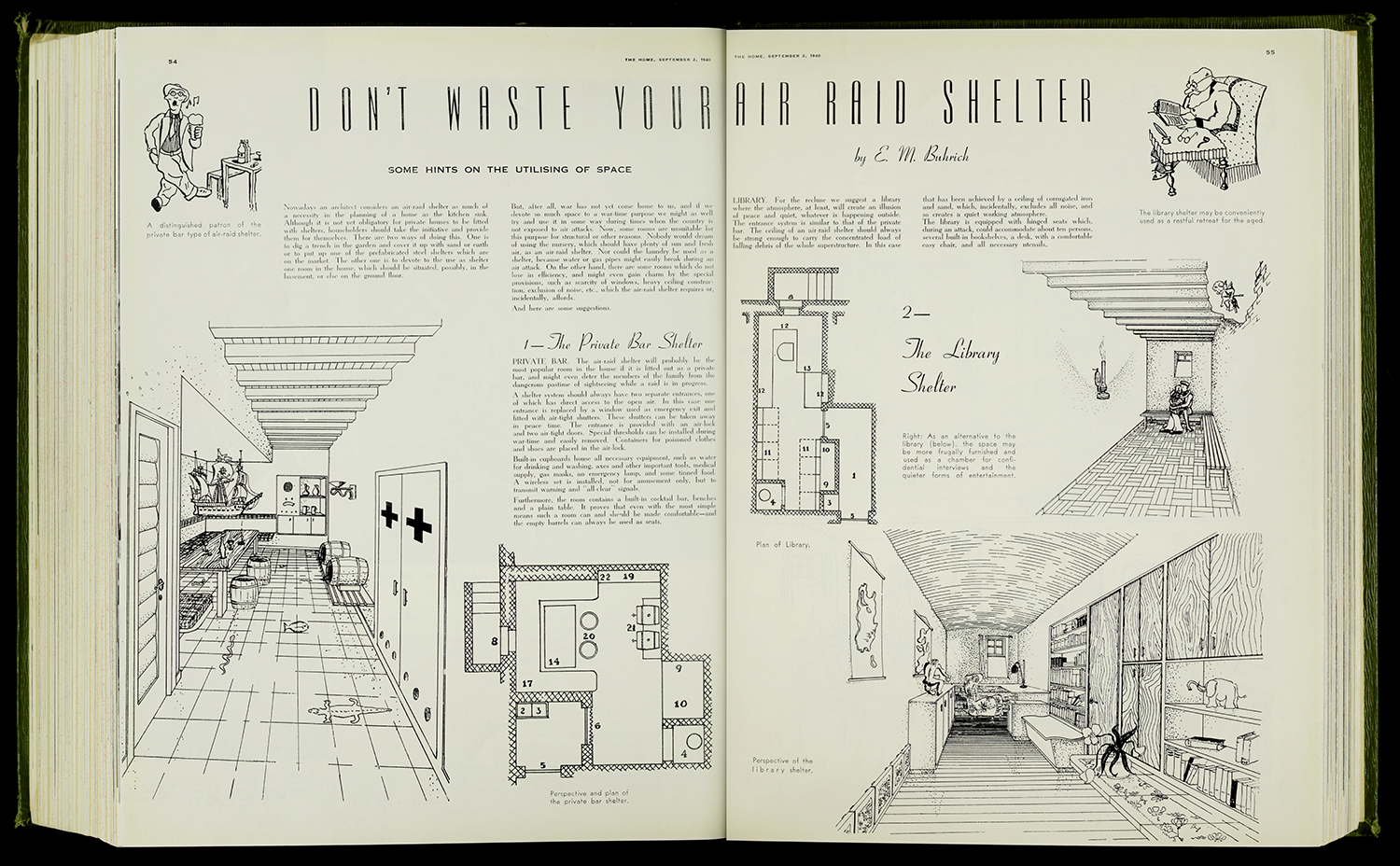 The move to Australia

[media]In New South Wales their European architecture degrees were not recognised as an automatic basis for professional registration. However, Professor Alfred Hook from the University of Sydney introduced them to Heather Sutherland and Malcolm Moir in Canberra, who gave them their first six months employment. In 1940, Eva Buhrich gave birth to twin sons Neil and Clive. The family moved to Sydney and she soon obtained a job working for General Motors at Homebush as a draftsperson. Here she met other refugee female architects from Europe. Sydney Ancher, Arthur Baldwinson and Walter Bunning were other Sydney architects with whom the couple were friendly. 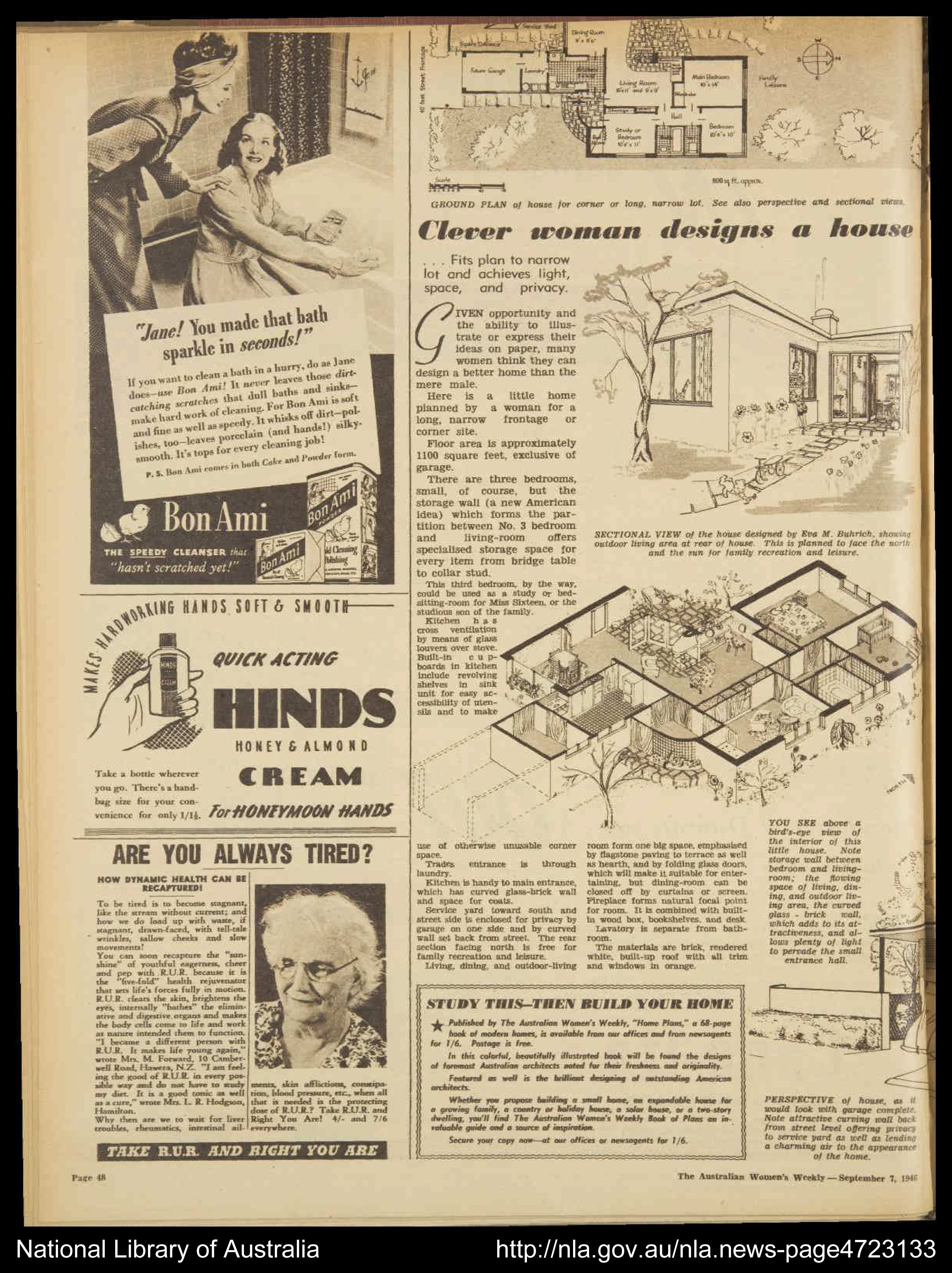 After the war, Eva Buhrich worked for two years with the Commonwealth Experimental Building Station. In the later 1940s, she spent a year in partnership with her husband and worked as a freelance designer. According to Hugh, his wife eventually gave up architectural design because of the poor wages she received on the female rate of pay. She found she was paid much better as a writer. Hugh cannot recall that any of her architectural designs were actually constructed. [media]Neither did she collaborate on either of the two superb modernist houses they built for themselves in Castlecrag overlooking Sydney harbour. The first at 315 Edinburgh Road was built in 1947 and the second at 375 Edinburgh Road between 1968 and 1972. Designed in a purist Bauhaus aesthetic, both houses remain popular icons for architectural students today. 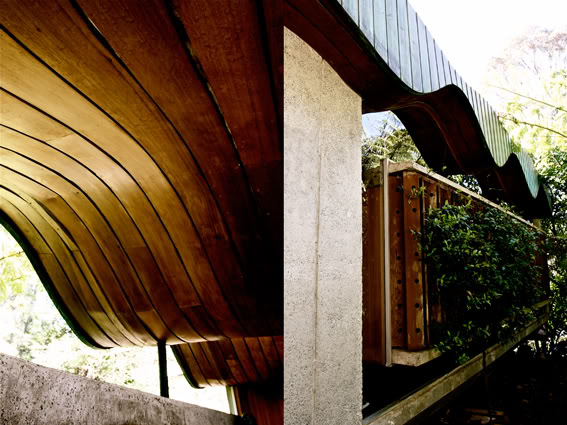 By the 1950s Eva Buhrich was working in public relations as a writer with the advertising agency J Walter Thompson. From this she obtained freelance work as an editor and graphic designer for the industry journals Building Ideas (between 1959 and 1973) and Furniture Trends (for Pyne Board between 1964 and 1975). She also wrote freelance architecture articles for the Australia Women's Weekly (mid 1940s), Woman (1950s), House and Garden (early 1960s), Walkabout (mid 1960s) and other publications. She appealed to her widest audience through her column in the Sydney Morning Herald (from 1957 to the late 1960s), where she consistently championed modernist design. Not long before her death from cancer in March 1976, she published her only book, a populist self-help text on outdoor living space. This was an area of domestic design which had long fascinated her. Although a native German speaker, Eva Buhrich's English writing style was fluent and thoughtful, and she became a prominent commentator on architecture and building in Sydney. Writing for the Sydney Morning Herald, she was possibly the first woman to write about these issues under her own by-line in a major Australian newspaper.