[media]The County of Cumberland Planning Scheme was arguably New South Wales's first attempt at a comprehensive and coordinated town plan for metropolitan Sydney, and, after a short and troubled history, it was ultimately a failure. 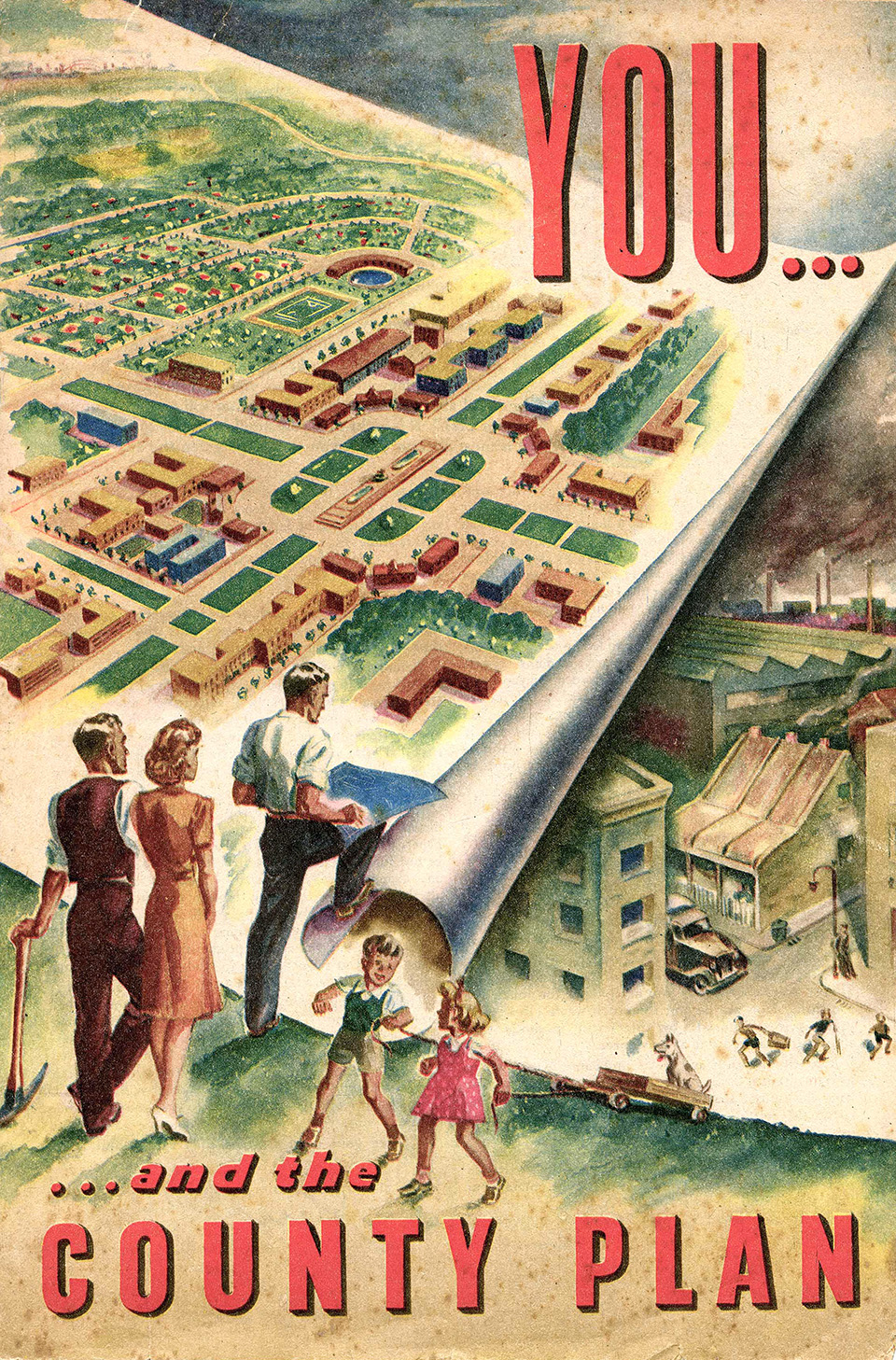 Aware that postwar growth would put pressure on Sydney's existing footprint, in July 1944 the Labor Premier William McKell announced that he intended to introduce legislation concerning both

the extension of the boundaries of the City of Sydney, and the Union of Areas in the County of Cumberland.

[media]The second proposal was a most radical innovation in metropolitan governance, in that it created a tier of government intermediate between local and state governments – the Cumberland County Council – to oversee preparation and implementation of metropolitan Sydney's first statutory plan. The Cumberland County Council was established under the provisions of the Local Government (Town and Country Planning) Amendment Act 1945, which enabled local councils to prepare comprehensive local planning schemes for the first time. The process was overseen by a new Town Planning Branch in the Department of Local Government, with another new creation, the Town and Country Planning Advisory Committee, providing high-level ministerial advice. 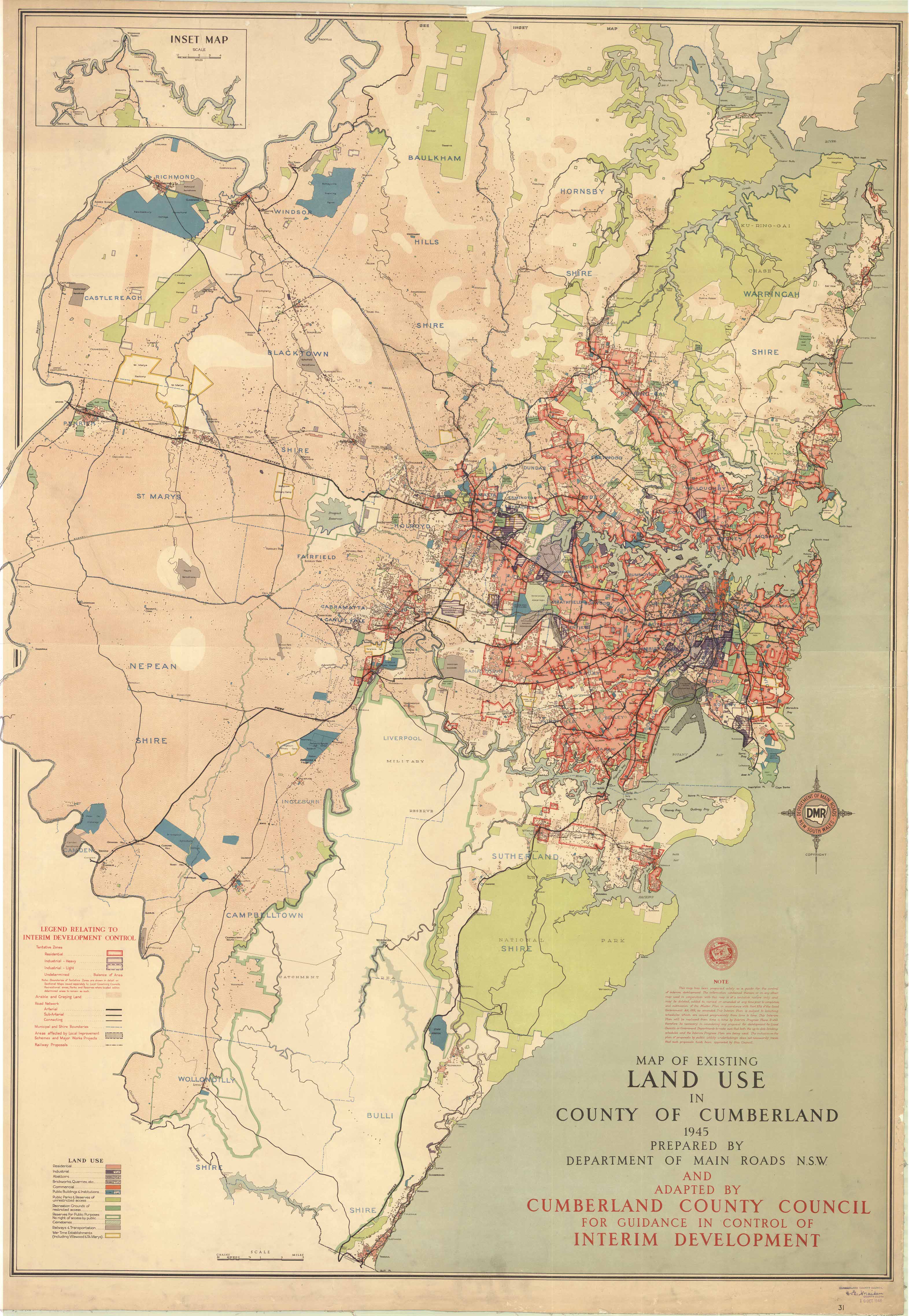 Released in 1948 but not legally gazetted until 1951, the County of Cumberland Planning Scheme has been described as

the most definitive expression of a public policy on the form and content of an Australian metropolitan area ever attempted.

It drew inspiration from the London plans of Patrick Abercrombie, and introduced land use zoning, suburban employment zones, open space acquisitions, and the idea of a 'green belt' for greater Sydney. The Main Roads Department supplied plans for an expressway network. The scheme tied in with the Commonwealth Government's strategy to prepare for predicted rapid postwar growth, and in June 1947 the Cumberland County Council was inaugurated by state parliament, to prepare 'for the guidance and control of growth in the County' – ultimately the future direction of growth for metropolitan Sydney.

Opposition to the plan

[media]The cornerstone of the Cumberland County Council Scheme was a 'green belt' around the existing urban footprint, designed to restrict urban sprawl, while satellite towns beyond the belt would take care of future growth. But from the outset, the Cumberland County Council was in a precarious position, particularly with its constituent councils, which were uneasy about its new powers: only four suburban municipalities had worked to develop comprehensive town planning schemes by the time of the Cumberland County Council's formal demise. It also faced hostility from more entrenched state government agencies, such as the Sydney Water Board and the Department of Housing. It met strenuous opposition from property owners, and by the mid-1950s had 22,000 claims against it for 'injurious affectation' arising from county zoning. A further blow came when anticipated Commonwealth funding never eventuated. 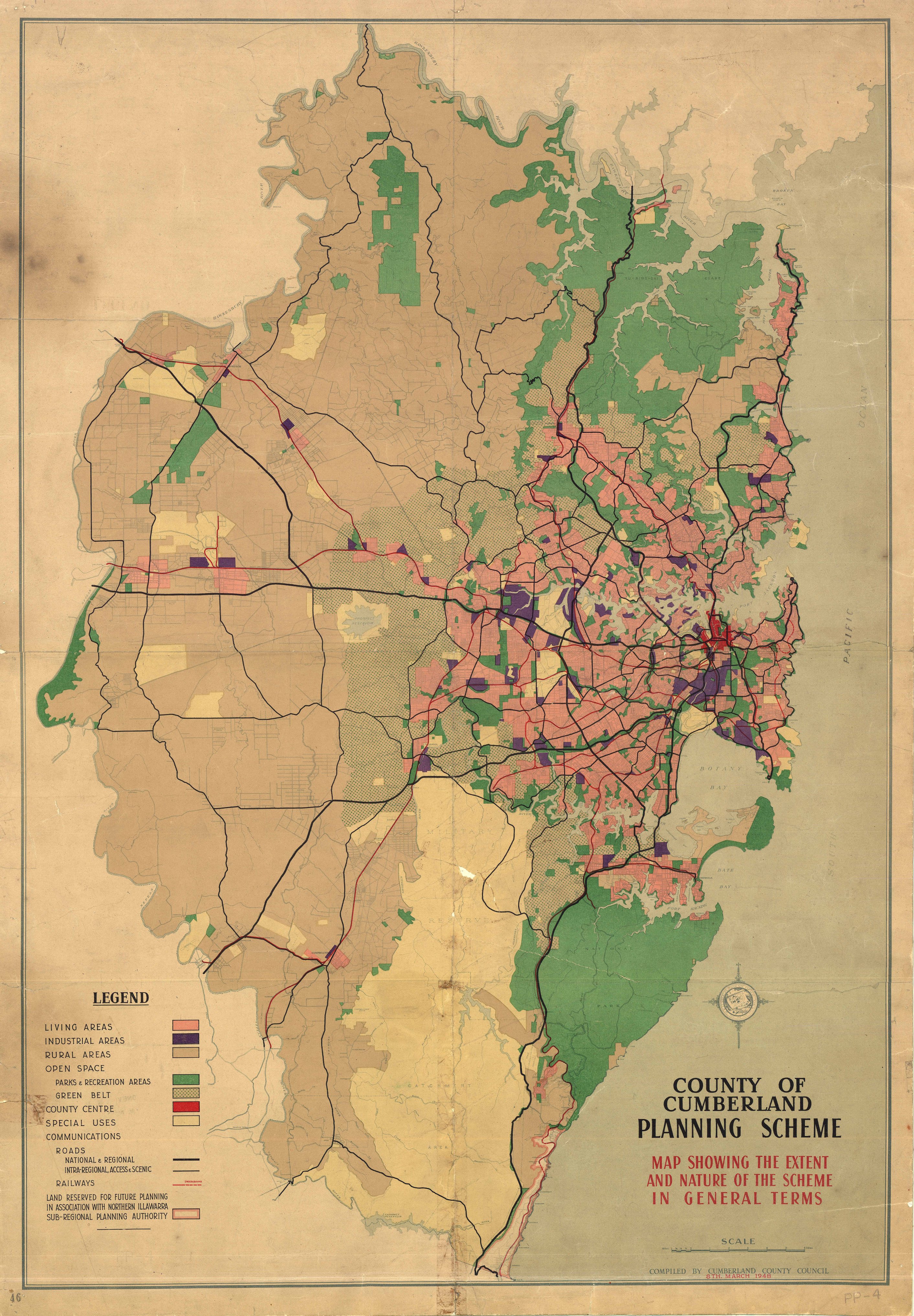 The green belt to prevent sprawl was the most contentious element, and it was continually attacked by developers, who saw it as an impediment to future profits. In response to these mounting pressures, the Cumberland County Council was dissolved on 19 December 1963 and replaced by a State Planning Authority, in accordance with the State Planning Authority Act, 1963. With the advent of the conservative Askin state government in 1965, the Cumberland County Council Plan's grand objectives were finally put to rest, with the result that thousands of hectares of farmland were 'released' for housing, incrementally whittling the green belt away to accommodate ongoing population increases from both immigration and the long term results of the postwar 'baby boom'. The pressure of increasing demand for land also affected the Department of Main Roads' proposed 'County Roads': the state government requested that the Department eliminate the least necessary road reservations within the county. Thus raw new suburbs sprang up, devoid of vital infrastructure. An eventual compromise led to developers making contributions to help fund infrastructure in new release areas.

The limbo in metropolitan planning lasted until 1968, when a new 'vision' for the Sydney region was released, called the Sydney Region Outline Plan: this abandoned the green belt-satellite city concept in favour of linear development. Unlike the County of Cumberland Planning Scheme before it, this plan was never made law, and while this, in theory, enabled greater flexibility and change, it allowed much less control over planning in the metropolitan Sydney region. This change was from a legally enforced metropolitan plan to one based on 'objectives' and 'principles', without the comprehensive detail which had been a vital underpinning of the Cumberland County Council Planning Scheme.