[media]In 1887, Sydney's first Irish Archbishop, Cardinal Patrick Moran, selected the patron saint of sailors in a storm to guide and protect the newly erected church of St Canice in Roslyn Street, near the centre of Kings Cross and serving the district of Elizabeth Bay. In choosing Canice, Moran was drawing on his love of the saint, his love of Kilkenny and his love of history. Prior to becoming Australia's first cardinal, Moran had served there as the Bishop of Ossory and was familiar with Canice's burial ground in the ancient city. The saint died there in 599. St Canice (Anglicised as Kenny) was a monk of deep learning and compassion. He was renowned for his friendship with St Columkille (Columba) of Iona in Scotland. Legend has it that when Columkille and his small crew of monks became caught in a violent storm while rowing there, Canice instinctively heard their frightened cries. Rushing to the chapel, he prayed for their safety and all was well. 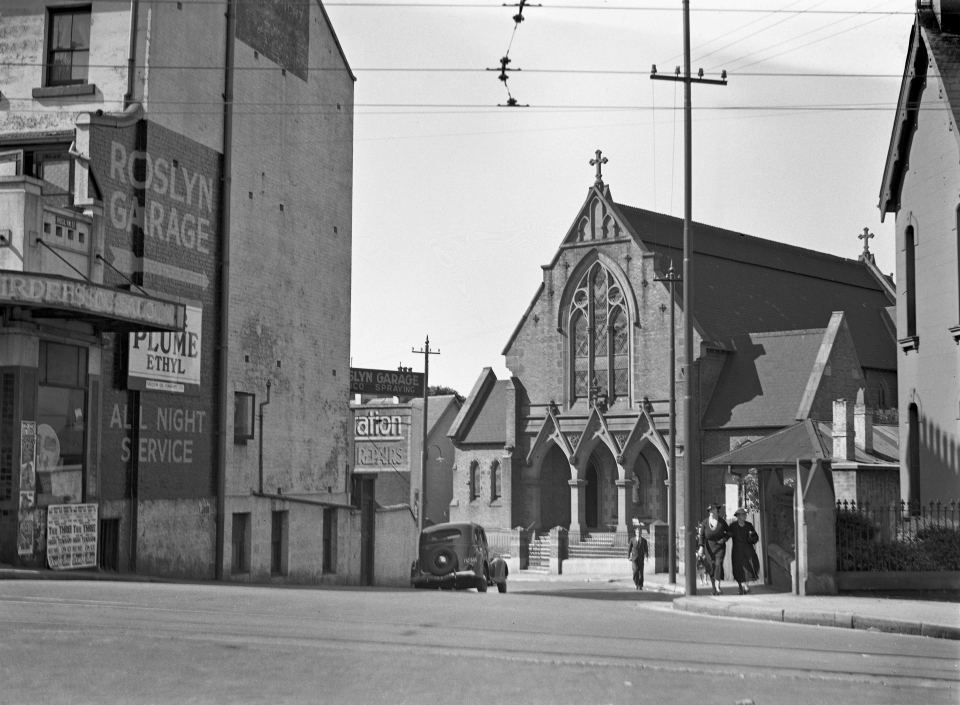 John Hughes, donor to the church

[media]In 1888, Cardinal Moran's love of history helped instill a spiritual essence to the early community of St Canice. [media]However, spirituality alone does not a building make. Without the philanthropy of John Hughes (1825–1885), St Canice's would never have been built. John Hughes arrived with his parents and siblings as a 'bounty immigrant' (assisted by the colonial government) on the Crusader in January 1840, just as the Irish famine started. He came from Drumshambo in County Leitrim, and he immediately saw the opportunities that Sydney had to offer. Using connections within the Catholic community, Hughes opened his own grocery business on Market and George streets in 1851. By 1862 he was an established wholesale merchant and importer. He married Irish-born Susan Sharkey in 1856, and they had eight children. 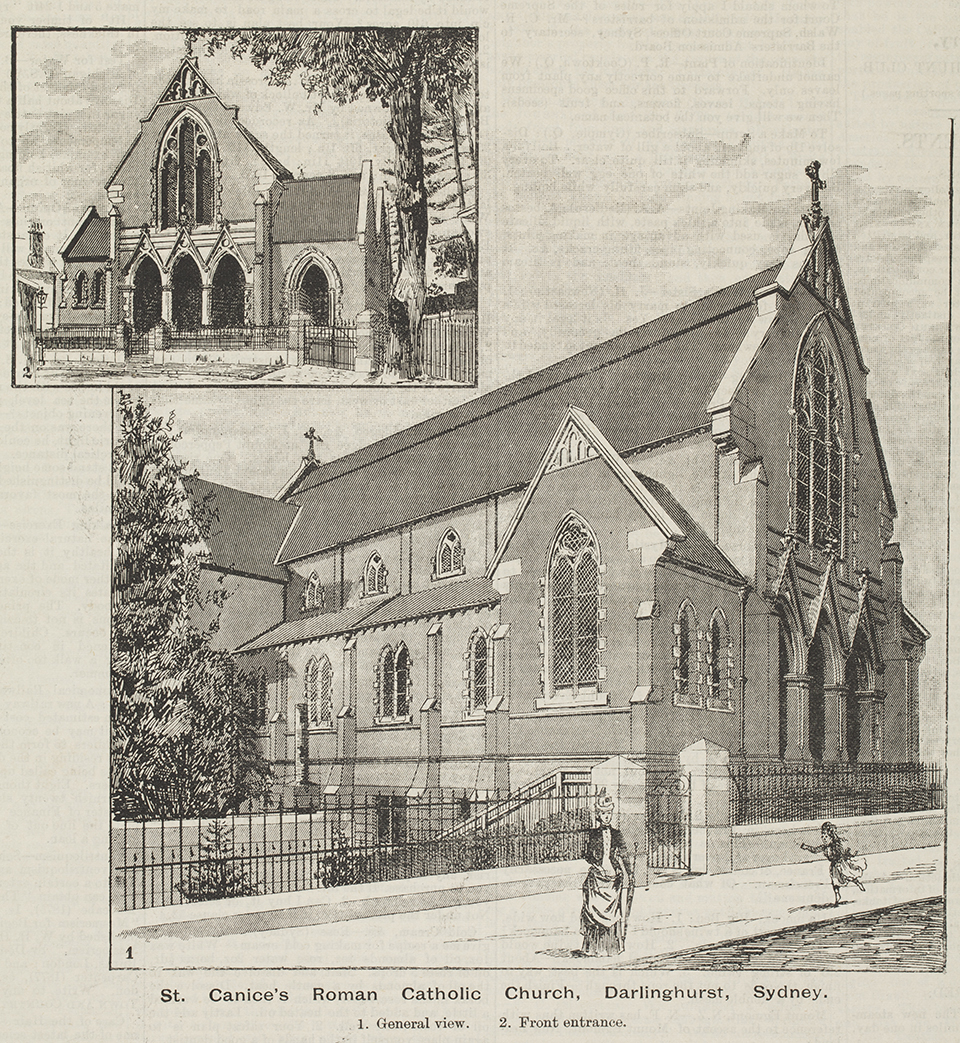 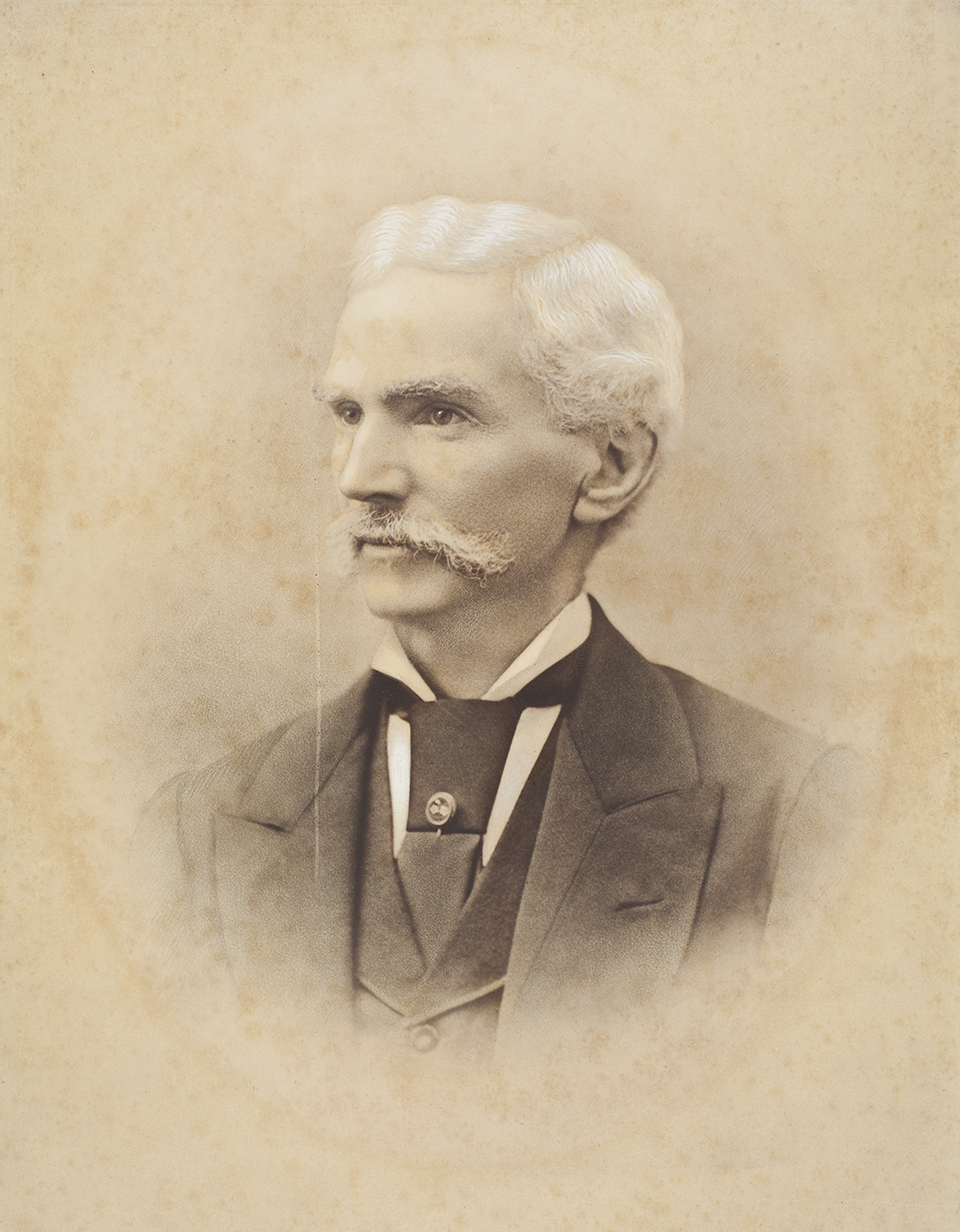 As Hughes's wealth increased, so did his generosity to the church. In 1882, three years before his death, he made considerable contributions to the rebuilding of St Mary's Cathedral. In that same year he organised and paid for the establishment of a convent at Rose Bay, staffed by the Sisters of the Society of the Sacred Heart of Jesus. Two of his eight children entered the order and on the death of his wife, their home, Kincoppal, was bequeathed to the sisters. In 1971 the school that was established there amalgamated with the Convent of the Sacred Heart at Rose Bay to form Kincoppal-Rose Bay School of the Sacred Heart.

The land on which St Canice's stands was donated by Hughes shortly before his death. Susan, his widow, refused to accept that an inferior building might be built due to a cost overrun, and gave a further £4,000 towards its construction. In total the family contributed approximately £8,000 – an enormous amount at the time.

This wealthy Irish-Australian Catholic family prospered in the colony. Their son Thomas was Lord Mayor of Sydney several times and knighted in 1915. Their daughter Jane married John Lane Mullins, the Sydney-born son of another prosperous Irish family. Mullins became a benefactor of the arts and State Library of New South Wales where his bust now sits.

John Barlow, a cousin of John Lane Mullins, was awarded the architectural contract for the church building. Barlow's design was early English in style. The intent was to be practical but warm in atmosphere. The colourful interior blends and softens the structure made from brick and stone and the three porches provide shade from the harsh exterior light. In the hurly burly of Kings Cross, St Canice's offers an oasis of peace.

The stained glass windows behind the altar were contributed by the Lane Mullins family to commemorate the saint. The windows depict scenes from St Canice's life. He is seen being taught by St Finian, praying for St Columkille and teaching at Aghaboe. The central window with the image of men being tossed about on a stormy sea tells the story of Canice becoming the patron saint of sailors in trouble. To this day the image is used by the parish as its source of identity.

In its early years the church was run from St Mary's Cathedral. As the population grew in the area, the demands on the church became greater and in 1940 a new presbytery was built and resident priests shared its control with St Mary's Cathedral. In 1988 the Jesuits were assigned ministry of the parish and started their outreach programs for the community.

Kings Cross in Sydney is a long way from Kilkenny and Iona but as a neighbourhood it has its share of challenges. The people of Kings Cross are very different in needs and nationalities from those early Irish settlers who helped build St Canice's, but the church still offers a reflective and peaceful haven in their midst.