[media]After the fire in 1872 which destroyed the second Prince of Wales theatre, Robert Fitzgerald was determined to rebuild his theatre, and there were immediate plans for a third theatre of that name. Refinancing was complicated, however, and work did not start until 1875. The same architect as before, JF Hilly, designed the new theatre, again incorporating the Castlereagh Street facade of the earlier buildings, but adding walls of brick and posts and framing of cast iron. This theatre opened on 11 December 1875. It was named, however, Sydney's second Theatre Royal. We don't know the reason for the change, but can speculate that the first manager and lessee of the theatre until 1882, entrepreneur Samuel Lazar, may have been instrumental. Certainly the two Prince of Wales theatres did not have happy histories and this was a new start, under a respectable and fashionable name. Lazar, in his speech on opening night, addressing what he called 'a large liberal and enlightened public', articulated its policy: 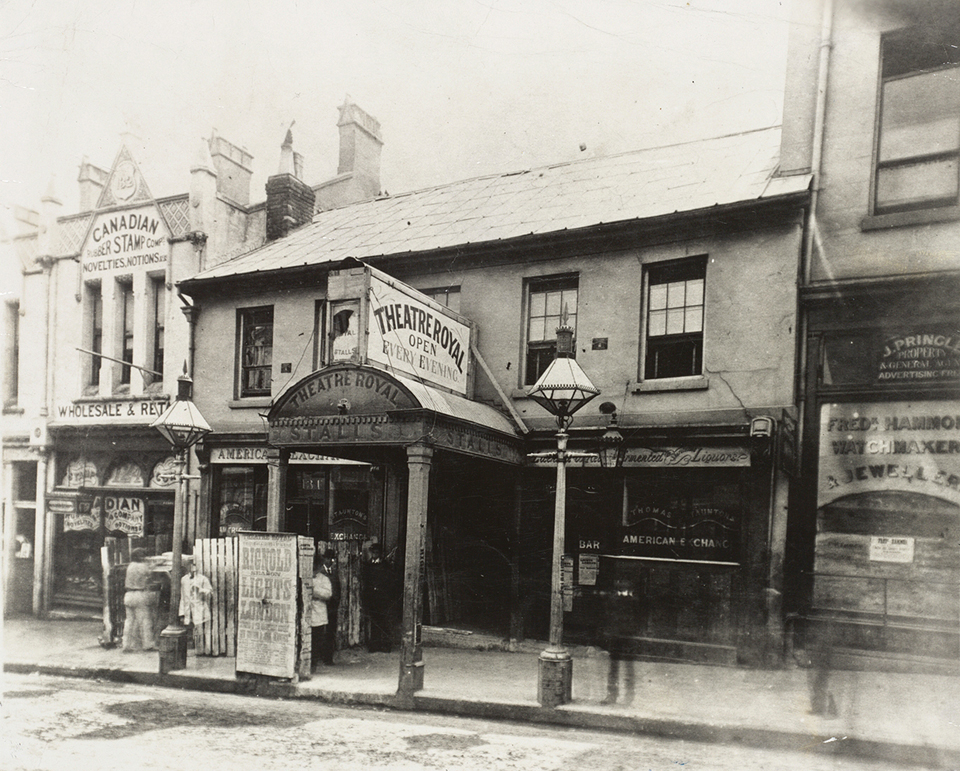 As long as I am its manager I shall endeavour to place such amusements before you as will be acceptable and pleasant to the eye and inoffensive to the ear. [1]

The season began with a production of HJ Byron's popular drama Daisy Farm.

This Theatre Royal had a slightly bigger auditorium and a slightly smaller stage than the previous Prince of Wales. The building was about 140 feet (42/6 metres) long and 60 feet (18.2 metres) wide. The inside was decorated in white, gold and grey, with light blue wallpaper and a blue ceiling scattered with gold stars. There was crimson upholstery and individual oval-backed chairs in the expensive seating. There were even benches, rather than standing room, in the pit. It was lit with a central chandelier and small gas lights with mirror reflectors around the walls. Claims were made for an audience capacity of over 2,300 people, but it probably seated around 1,500 in comparative comfort.

The stage still had the old system of grooves for staging – panels sliding in and out – but there was some capacity to fly in drops from above. It had a gilded proscenium arch, an act drop featuring a scene on the River Nile and crimson baize in the front curtain.

There was also terrible ventilation and very poor fire precautions. The ceilings, box fronts and proscenium were all made of canvas-covered wood and there were 78 gas jets around the walls of the auditorium. There was a fire trap mish-mash of utility buildings behind the stage, timber stairs and no safety curtain. Things didn't improve much with wiring for electricity which began in 1882.

JC Williamson's at the Theatre Royal

[media]The theatre was redecorated many times: in 1882 when Williamson's first leased it; after a fire in 1892; in response to safety legislation when a brick proscenium wall and metal ceilings were installed: and to keep up with fashion. Finally in 1921 it was substantially rebuilt, at an estimated cost of £40,000. The remodelling was done to the design of Henry Eli White, who redesigned the façade in an Edwardian style and redecorated the interior in an Adam style. This remodelling included extensive trelliswork which disguised the mechanics of the improved ventilation system. All but one of the 13 supporting posts were removed from the stalls and, for the first time in any theatre in Australia, the seating in the gallery was changed from unnumbered benches to armed and padded seats. The lessees were not in favour of this innovation, since it reduced the seating capacity to just under 1,300 people. And there was another big innovation – the lavatories for the gallery were on the same level. 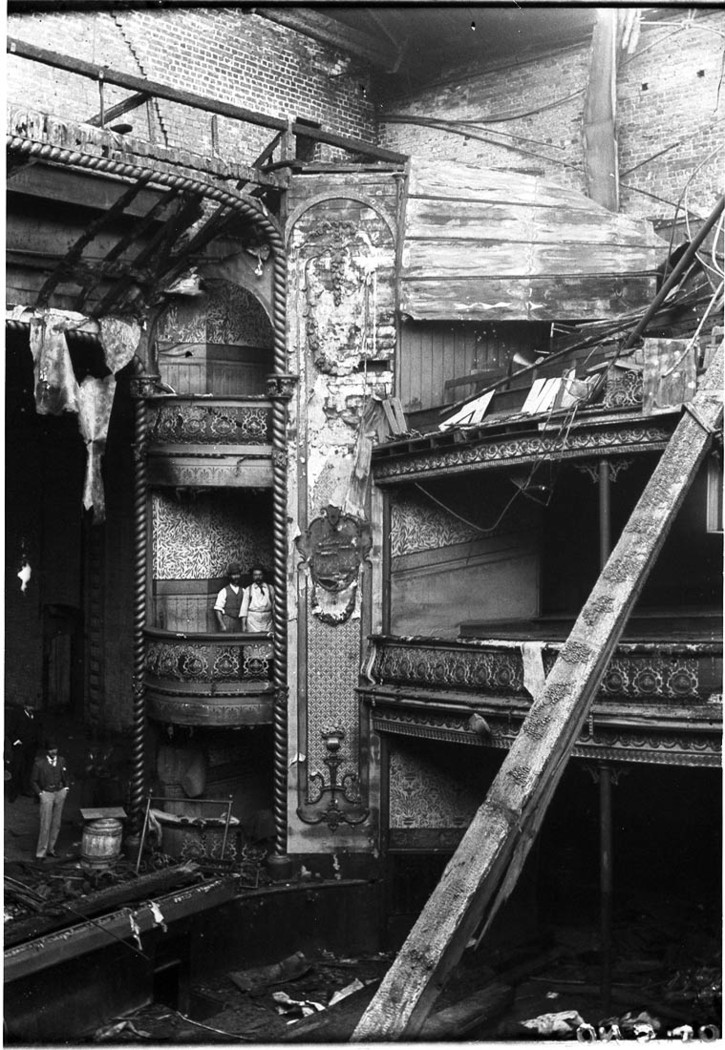 This Theatre Royal was the long-time Sydney outlet for the JC Williamson organisation in its various combinations. Williamson himself had begun there in November 1879 with the huge success of HMS Pinafore, and Williamson's company remained the lessee after his death in 1913. The theatre saw many of the 'hit' shows of the period, including yet another revival of the 'famous Napoleonic military spectacular play…A Royal Divorce' and the appearances of the matinee idol Julius Knight in The Scarlet Pimpernel, as the two Rudolph Rassendells in The Prisoner of Zenda and as Marcus Superbus in The Sign of the Cross.

[media]The Theatre Royal had mixed fortunes after World War I, being used as a vaudeville house in the 1920s under the associated management of the Taits, and in the depression years of the 1930s it varied between presenting cinema, variety and musical theatre. 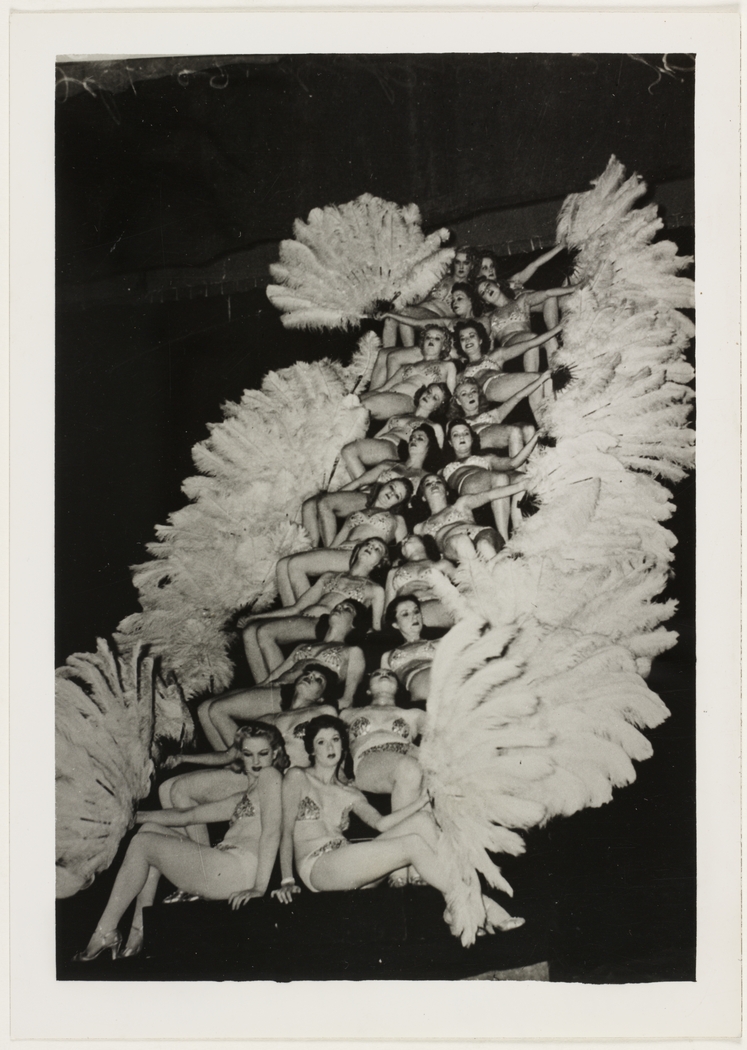 After World War II, the Royal again became Williamson's principal theatre in Sydney until it was demolished in 1972. This action was the result of complex issues around the ownership of the site. Despite its extensive property holdings, Williamson's did not own the Royal. Over the first decade of the twentieth century, JC Williamson's property adviser, Gustave Ramaciotti, in partnership with two others, had bought the large city site which included the theatre, for £25,000, and then leased it back. Most of those leases expired in 1969 and the site was offered for sale. It was bought by Lend Lease as a commercial development, with the final sections, including the Theatre Royal, to be available in April 1972.

The last performance at the theatre, on 29 April 1972, stimulated action to save it. Through extensive public agitation and the effective powers of the Builders Labourers Federation, it was resolved with a decision to incorporate another Theatre Royal into the planned development of the MLC Centre.

The new Theatre Royal, designed by architect Harry Seidler and incorporated in what is now known as the MLC Centre, turned the theatre space around 90 degrees. It is entered from the King Street level through an anonymous façade into a foyer with box office and reception. The interior of this foyer features a bronze sculpture by Charles Perry and a ceiling designed by the Italian consultant architect Professor Pier Luigi Nervi. There are curving stairs upward to the circle and down to the stalls and bar area.

Inside it is an unadorned theatre, in the modernist style. The stage is approximately 30 metres wide by 32 metres deep, with a narrow apron of less than one metre. The plain proscenium has only a safety curtain, although facilities exist for a decorative curtain to be added as required. The audience, a capacity of 1,157, is seated on two fan-shaped levels and they enter from side aisles. The upholstery is burgundy, the walls are finished in a dull gold lacquer and the ceiling is of slatted pine. Facilities for the actors include dressing rooms which are below the auditorium. The Theatre Royal has fine acoustics, which are on occasion too keen for the pleasure of its audiences, since the rattle of trains on the Eastern Suburbs railway line, 10 metres below, can be clearly heard.

This Theatre Royal opened on 23 January 1976 with a performance titled, like the closing one of the old theatre, A Night to Remember. The start was very rocky financially. Initially JC Williamson's again leased it, but in 1978 Lend Lease, later named General Property Trust and QIC, took over as the entrepreneur of the theatre. Finances did not stabilise and improve until the early 1980s when the theatre was committed to a series of long-run popular musicals, beginning with Cats.