John Woods [media]was born at Castleblayney, County Monaghan, Ireland in 1828, and arrived with his wife Margaret in Sydney in 1853, where he started a carrying business. One of his first contracts was carting rails from Sydney Cove to Redfern for the construction of the first railway. [1] 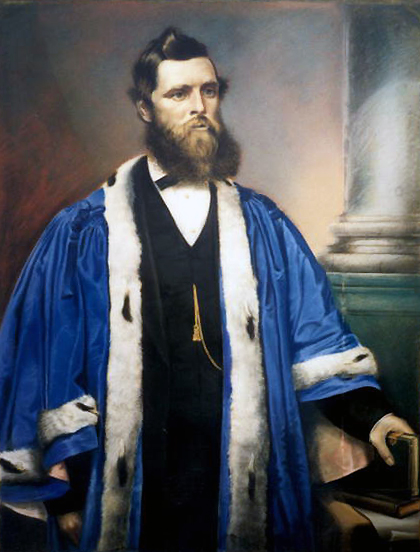 In April 1858, with Thomas McKeown and James Smith, he was granted a council contract for the emptying and cleansing of privies throughout the city. At this time he was a dray contractor of Bullanaming (now Renwick) Street, Redfern. He also became an agent, joining Thomas McDonald, to form Woods & McDonald, agent for carriers, at 25 Campbell Street. He later founded the carrying company called Woods, Shortland & Co. By 1873 this company had expanded and was based at Glenfield, near Liverpool.

In 1861 Woods's address as a contractor was in Redfern, but as early as 1861 he had been a signatory to the petition to reopen Manly National School which one of his children attended. [2] By 1863 he had moved to the Corso, Manly Beach. In 1873, he was living at The Esplanade, Manly Beach. Along with others, he arranged and paid for the planting of the pine trees along the beach which were to become such a feature of Manly. [3]

In 1880 he bought Fairlight House, built for Henry Gilbert Smith in 1854. Woods added the distinctive tower and porch in the early 1880s. He caused a public protest when he attempted to buy the public reserve in front of his house for private use in July 1882. Despite this, he was 'a highly respected and prominent local landholder', involved in ventures such as the Manly School of Arts, the new Public Baths at Little Manly, and the relocation of the Manly Public School. [4]

From 1876, John Woods was a director of the Port Jackson Steam Boat Company, becoming chairman in 1882. In 1877 he received a presentation for his services to the Co-operative Fire Brigade. He was Returning Officer for Manly Council in February 1877 when fellow city alderman Thomas Rowe was returned as first Mayor. In 1883 he was the first chairman of the Manly Gaslight and Coke Company, and held directorships in several other important companies.

Woods died at Leona, Manly, on 13 July 1904, after a paralytic fit followed by a fall from his carriage. He had nine children. An obituary in the Sydney Morning Herald noted that he was one of Sydney's oldest residents, and had celebrated his golden wedding anniversary in 1903. [5]