Fain wou'd I give you my warmest Thanks, and tell you of the great affection I bear you for those genuine, disinterested and animated Exertions of Kindness, you poured upon me, when I wanted your Assistance; but my Pen is even incompetent to give you a faint Idea, how high the pulse of Gratitude beats within me; my Heart, I hope is too honest not to look on Flatterers in a very despicable point of View; tho' it cannot but approve of Eulogy, which is no other than paying a just Tribute of Praise; and my mind wou'd feel an insupportable Burthen, were I not permitted to evince you its sense of Love and Duty, for so worthy a Benefactor; - I thought it my duty to write to Mr Wilberforce, giving him the underneath account of our Voyage, and the situation of this Colony; I mean not to intrude, and hope I have not done wrong, if I have, I can only lament it, and plead in excuse that I had not you to Consult.

It would be tedious to enumerate the variableness of the Winds, and trifling Occurrences that happened in our rout to the Cape; I will therefore only Remark, that we sailed from Cowes harbour (Isle of Wight) the seventeenth of January, and arrived in False Bay, Cape of Good Hope the thirteenth of April; that our Voyage might be deemed a very Prosperous one, so far as we pass'd the Line with few Calms; and those of short duration, nor had we any bad Weather, 'till we came in sight of that tremendous Promontory; (well might its Discoverer, Bartholomew Diaz, name it Cabo de Tormentoso, or the Stormy;) we met so violent a Tempest, which continued for six and thirty Hours, that left us no Room even to hope an Escape from a Watry Grave; It being the winter season at our Arrival, was the reason of our anchoring in false Bay, as the safest Harbour; otherwise Table bay in fine Weather, or in the Summer Season is much to be prefer'd; being contiguous to the Cape Town; we found the Dutch, answer minutely the Character given of them by Travellers; a Change of Clime, which is generally believ'd to produce a Change of Constitution & Disposition had not abated one Tittle of their Propensity to Avarice; their Governors are Merchants, and monopolize the whole Stock of the adjacent Country, and will not supply the Shipping but at an advance of five or six Hundred per cent.

Here I had some Conversation with the unfortunate Mr Riou (of the Guardian), the Loss of his Ship, will be severely felt by this Colony; and I much fear the Dutch are taking every Advantage, of his situation, charging enormous sums for Wharehouse room, and fresh Provisions for the Crew; so that the Cargo must, ere now be insufficient to defray the Cost - We left the Cape, the twenty ninth of April, and anchor'd in this beautiful Harbour the twenty sixth of June; Wou'd I cou'd draw an eternal Shade over the Remembrance of this miserable Part of our Voyage, miserable - not so much in itself, as render'd so by the Villiany, oppression and shameful Peculation of the masters of the Transports. - The Bark I was on board of, was indeed, unfit, from her make & size, to be sent to so great a Distance; if it blew but a trifling Gale, she was Lost in the Waters; of which she shipp'd so much, that from the Cape, the unhappy Wretches, the Convicts, were considerably above their waists in Water; and the men of my Company, whose Births were not so far forward, were nearly up to their middles; in this situation they were obliged, for the safety of the Ship, to be pen 'd down; but when the Gales abated, no means were used to purify the air by Fumigations, no vinegar was applied, to rectify the nauseous steams, issuing from their miserable Dungeons; Humanity shudders to think that of nine hundred male Convicts embark'd in this Fleet, three Hundred and seventy are already Dead, & four hundred & fifty are landed sick, and so emaciated and helpless, that very few, or any of them, can be saved by care or medecine; so that sooner it pleases God to remove them, the Better it will be for this Colony; which is not in a situation to bear any Burthen; as I imagine the Medicine Chest to be nearly exhausted and Provisions are a scarce Article. 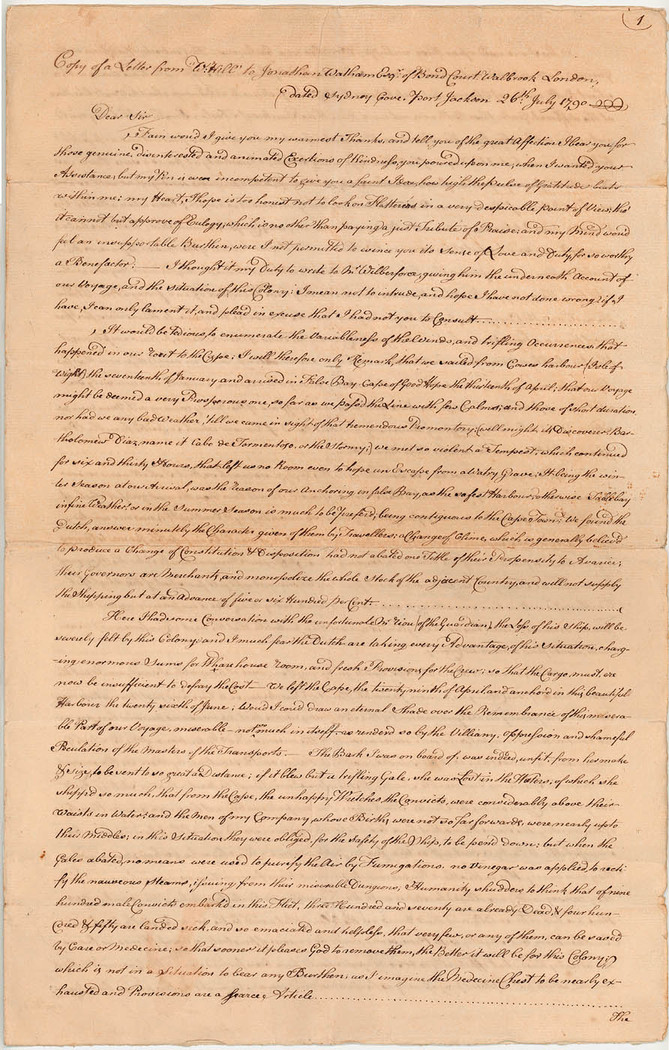