The 1798 Memorial, [media]made of marble, bronze and mosaic, in Waverley Cemetery, Sydney, is the finest 1798 Memorial in the world. It was raised over the grave of a famous Irish character, the Wicklow Chief, who died in Sydney, long after the events of 1798. 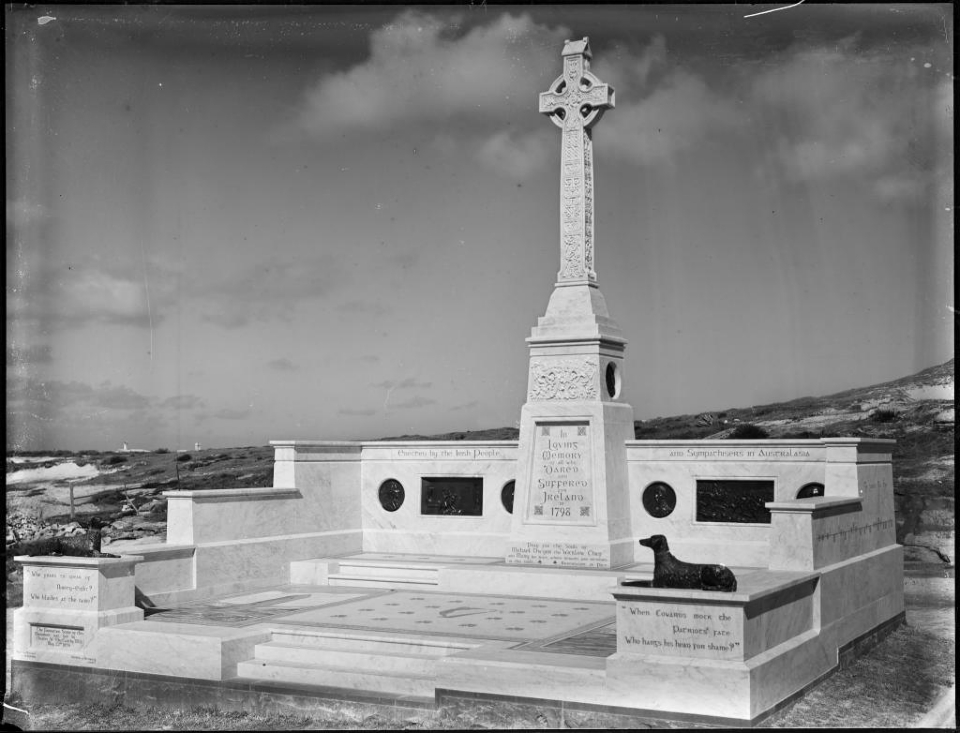 Michael Dwyer, the Wicklow Chief, is a well-known historical figure in Ireland. Irish people know that he took part in the 1798 Rising in Wexford, and when the Rising had been quelled, he continued the fight in his native Wicklow hills. Irish people generally do not know that he is buried in Sydney.

On 14 December 1803 Dwyer surrendered on condition that he be sent to America. He was sent to Australia. He arrived in Sydney on 15 February 1806 with his wife, Mary, on the convict ship, Telicherry. He was classed as a state prisoner, not a convict. Governor King had to treat him as a free settler. He gave him a grant of 100 acres (40.4 hectares) along the Cabramatta Creek outside of Sydney.

Centenary of the 1798 Rising

With the approach of the centenary of 1798, the Sydney Irish decided to find a conspicuous resting place for the Wicklow Chief. They paid £50 for a plot of ground at Waverley Cemetery. They could have obtained one for free in Rookwood Cemetery, but it would not have been in such a marvellous position overlooking the sea. Under the leadership of Dr Charles William MacCarthy, they engaged John Hennessy of Sheerin & Hennessy architects to draw up a plan for a memorial to place over his tomb.

[media]On Holy Thursday, 19 May 1898, the vault at Devonshire Street Cemetery was opened to remove the bodies of Michael and Mary Dwyer. The two coffins were placed in a large cedar casket and brought to St Mary's Cathedral on Saturday night, 21 May. At 2 pm on Easter Sunday the casket was taken to Waverley Cemetery in the largest funeral Sydney had seen up to that [media]time. The casket was placed in a vault and Dr MacCarthy laid the foundation stone of the monument to be built over it. The completed monument was opened on Easter Sunday 1900. 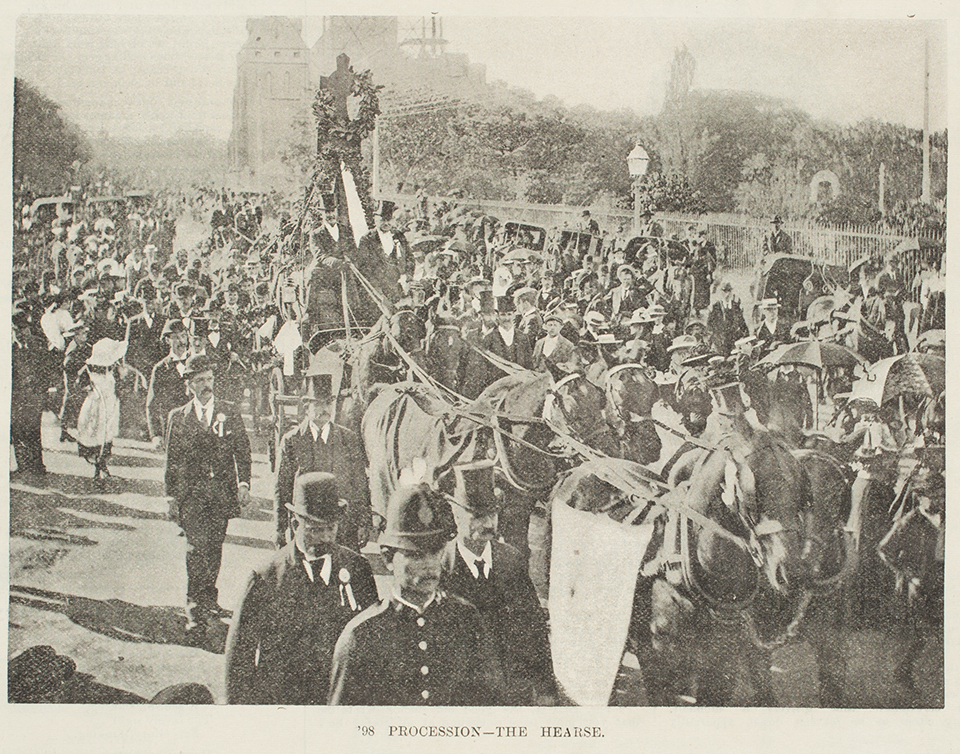 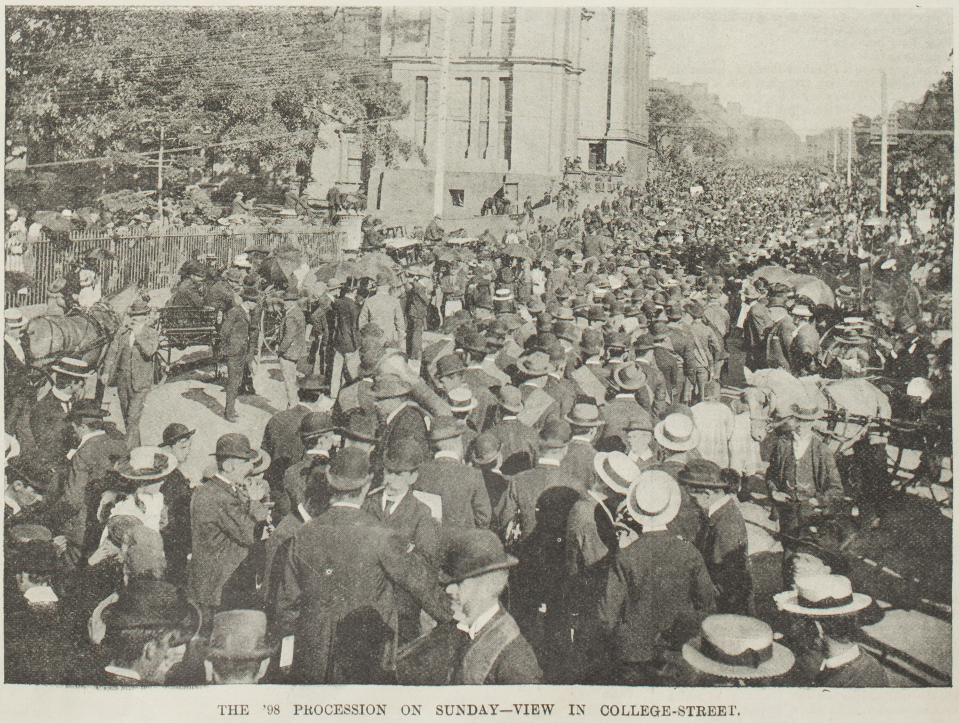 A rectangular platform, 9 metres wide and 7 metres deep, made of white Carrara marble, was raised over the vault containing the bodies of Michael and Mary Dwyer. A white marble cross, with intricate Celtic intertwining, was placed in the rear wall, rising nine metres into the air from the ground. Carved on the base of the cross are the words

In loving memory of all who dared and suffered in Ireland in 1798.

On the sub-base of the cross are the words

Pray for the Souls of
Michael Dwyer the "Wicklow Chief"
and Mary his wife whose remains are interred
in this vault. Requiescant in Pace.

The Latin phrase means 'May they rest in peace'.

A wall 1.83 metres high runs along the back of the platform. The wall is stepped down at the sides of the platform so as to be only 0.8 metres high at the front. Two bronze wolfhounds couchant sit on the front terminals at each side. Three bronze plaques, designed and made by Dr MacCarthy, as was all the bronze work, are placed in the rear wall at each side of the marble cross. The ones at the left represent Wolfe Tone, the capture of Lord Edward Fitzgerald, and Lord Edward Fitzgerald. The ones at the right are Michael Dwyer, the battle of Oulart Hill and Robert Emmet. High on the side of the cross on the left is a plaque with a bas relief of Henry Joy McCracken and on the right, a bas relief of Father John Murphy.

The platform is on two levels, both 7.3 metres in width. The first level, six steps up from the ground is 4 metres deep – the second level, a further two steps up, is two metres deep. Both are paved with gold mosaic, which has designs in green and blue and brown mosaic depicted in it. In the centre is a mosaic blue-green harp, with a female figure forming one side, which was a common custom in the eighteenth century. On each side of the harp is depicted a thatched cottage and a round tower. Artisans from Anthony Hordern's in Sydney did the mosaic work.

A bronze fence with gateway was positioned across the front of the monument in 1927 to deter vandals. It was designed by John F Hennessy before he died in 1924. The gate in the centre has an ornamental shield. At each side are panels with the Brian Boru harp depicted on a rising sun background. There are intertwined snakes under the harps.

The side facing the sea has an inscription in the Irish language, which may be translated:

People of Ireland treasure the memory of the deeds of your ancestors. The warriors die but the true cause lasts for ever.

The side facing west has an inscription in Irish, which translates 'May God free Ireland'. It also has an inscription running the full width of the wall in Ogham, which was a script formed by straight short lines across a base line. It was used in early Christian Ireland. Translated, the inscription reads:

The bright days of ancient Ireland will dawn once more.

On the rear wall are 76 names of men and women, priests and ministers, who took part in the 1798 Rising. Below them are the names, added in 1947, of those who were executed after the 1916 Rising. In 1994 the Irish National Association, to whose care the Monument is entrusted, placed a plaque behind the monument to commemorate the ten Irish Republican hunger-strikers, who died in the Maze prison, Belfast, Northern Ireland, in 1981.

The Irish National Association holds a ceremony at the Monument every Easter Sunday afternoon.