The [media]news of Maybanke Anderson's death at the age of 82 at St Germaine-en-Laye near Paris on Good Friday 1927 led to an emotional outpouring of grief in Sydney newspapers, and university and kindergarten journals. She was 'one of Australia's noble and notable women', and 'in this woman Deity would seem to have surpassed Itself'. Australia's first professor of psychology, H Tasman Lovell, wrote, 'She had a genius for initiating movements for education and social betterment … not many of us are really missed when we go; but the passing of Maybanke Anderson will be deplored.' [1] What had this now little-known person done to attract such a seemingly excessive response? 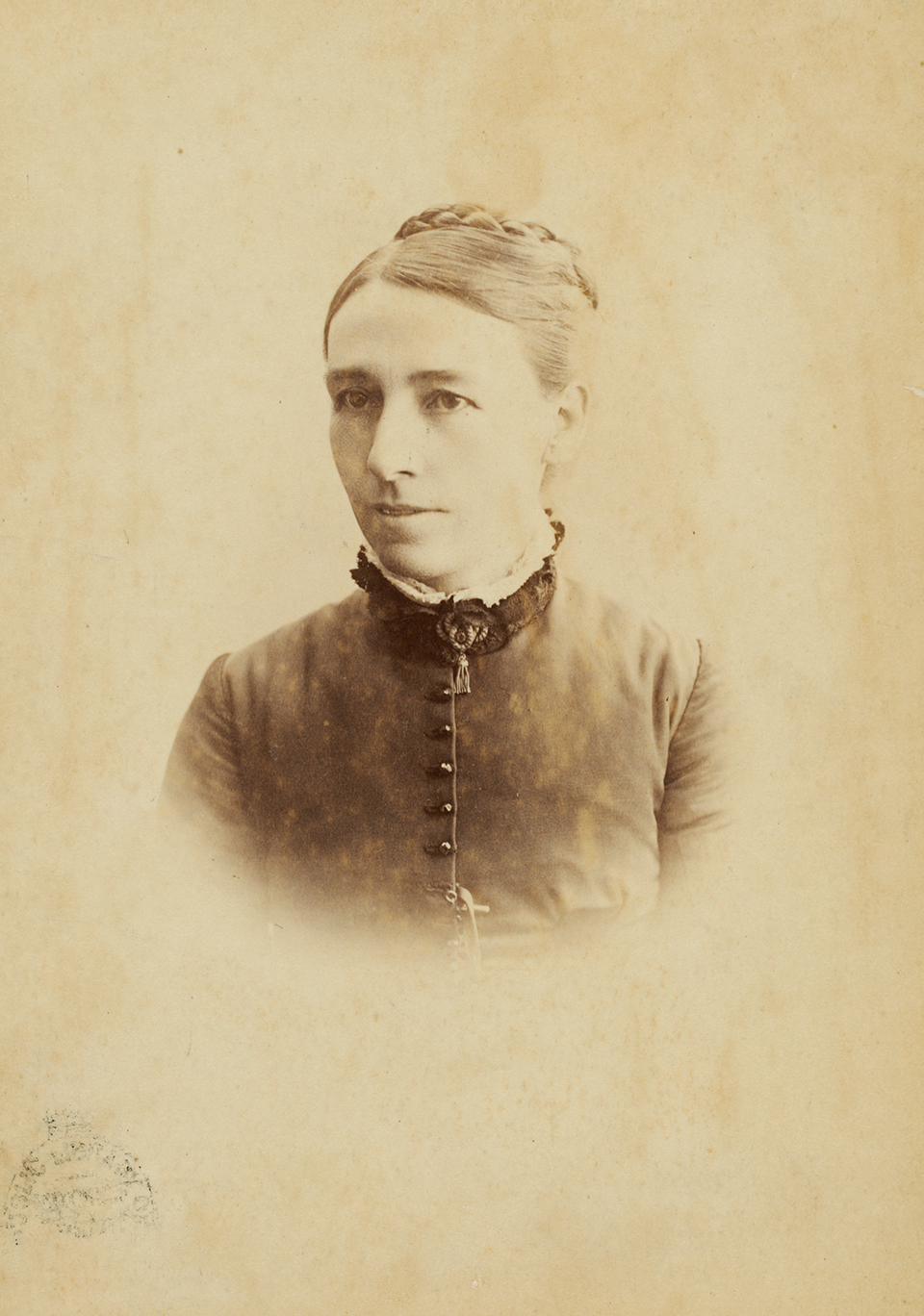 The then well-known woman who died near Paris was born near London, but her long tumultuous life was lived in Sydney. Maybanke Susannah Selfe was nine years old when her family left the quiet English village of Kingston-on-Thames. Influenced by Caroline Chisholm, her ambitious middle-class migrant parents believed that even if Australia was only partially civilised, it offered their children opportunities not available in mid-Victorian England. And so it proved to be.

In 1855 the Selfes settled in Sydney's notorious waterfront Rocks district, in Mary Reibey's historic house, so Maybanke grew up seeing first-hand the extremes of wealth and poverty. Her two brothers were apprenticed as engineers and she became a teacher, fortuitously following her mother and grandmother's then-unusual belief that women should be able to support themselves. A first-hand description of Maybanke when she was 17 appeared in a newspaper years later, after news of her death:

She seemed to me …simply grand, stately as a queen, and gracious to a degree. In after years all these qualities developed fully and hence her commanding influence throughout the whole of the remaining 65 years of her life. One great feature I remember was her voice, bordering on the masculine, but so modulated and sweet that once heard you could never forget. [2]

In 1867 at St Philip's Church on Church Hill, May, as she was known in the Selfe family, married a Maitland timber merchant, Edmund Kay Wolstenholme. Their first child, Harry, was born in Maitland soon after, and then the young Wolstenholmes joined her family, all moving to Balmain after her brother Norman Selfe was made chief engineer at Mort's Dock. Over the next 11 years of the Wolstenholme marriage six more babies were born; only Harry and his brothers Arthur and Edmund reached adulthood, the other four dying in infancy of TB-related diseases.

The marriage suffered. Edmund was often unemployed, so Maybanke became the breadwinner, first by keeping a boarding house, then by running a successful fee-paying girls' school called Maybanke College, at Frazer Street, Marrickville. Edmund's desertion and alcoholism are mentioned in their divorce papers. However, it was the failure of her marriage which propelled young Mrs Wolstenholme into the arena of law reform, and was the catalyst for the rest of her life.

Today it is hard to imagine a married woman's life in the colony of New South Wales in the 1880s. For example, divorce was only on the grounds of adultery, which was hard to prove; she had no rights to her children or to her earnings within the marriage, and could not leave her property to her children; she could not attend university, send her children to a care centre if she was forced to work, or vote even if she owned property and paid taxes; and rich or poor, single or married, she had no control over how many children she had. Gradually, through the 1890s with the help of a small group of like-minded Sydney female and male, single and married reformers, Mrs Wolstenholme changed all that. She trained herself to become 'a platform woman' who was informed about the legal injustices to women and children, who strategically planned her assault on that rigid legal system, and who trained herself to debate in public. She wrote to her ally Rose Scott at the beginning of their long campaign:

When I stand up all the old wild horse spirit surges up in me and though I tremble I feel as if I were ready to fight like a lioness. But we shall win more by being soft so I am going to be wise as a serpent and harmless as a dove [3].

From the nucleus of the Women's Literary Society – the first group of Sydney women to meet in the evenings – Dora Montefiore, Lady Mary Windeyer and her daughter Margaret, Maybanke Anderson and Rose Scott, and others such as Louisa Lawson, Frank Cotton, Professor Mungo MacCallum and artist Julian Ashton and his journalist wife Lizzie, founded the Womanhood Suffrage League of New South Wales. Its mottos were 'Equality is Equity' and Tennyson's lines from 'The Princess':

The woman's cause is man's; they rise or sink
Together, dwarfed or God-like, bond or free.

Maybanke was first vice-president, and then president during the vital years from 1893 until 1897. Always, for Maybanke, the vote was 'the kernel of all reform'.

Maybanke's stamina was prodigious. In 1893, for example, while living and working from Maybanke College at Marrickville, in addition to family and school duties and the suffrage struggle, her activities were as follows: foundation vice-president of Sydney University Women's Society ( later Sydney University Settlement); council member of the Teachers Association of New South Wales; founder and secretary-general of the Australasian Home Reading Union and vice-president of the International Women's Union; she became a Theosophist and obtained a divorce under Sir Alfred Stephen's radical Divorce Extension and Amendment Act of 1892. The following year she started her own radical feminist paper, The Woman 's Voice, to spread her reforming ideas still further, and in 1895 helped found the Kindergarten Union of New South Wales, beginning her lifelong commitment to helping the youngest and most vulnerable in society. Her joy in this was shattered when her second son, Arthur aged 24, was drowned in the Catterthun, off Seal Rocks in a storm. Maybanke broke down, The Woman's Voice ceased publication, but eventually the work went on.

Federation and the cause

Towards the end of the nineteenth century, federation of the Australian colonies was looming. New South Wales politicians had repeatedly shown they could not be trusted to deliver the vote to women, but in 1897 Maybanke saw an opportunity at the forthcoming Federal Convention to be held in Adelaide. As President of the Womanhood Suffrage League of New South Wales, she drew up a cleverly worded petition using the precedent that women in South Australia already had the vote and couldn't have it removed in the proposed federal constitution,. After considerable wrangling, it passed by a narrow majority. This meant that, in the interests of national unity, recalcitrant states like New South Wales – and its leader Edmund Barton – would eventually have to follow suit. Maybanke resigned from the Womanhood Suffrage League and formed the Women's Federal League of New South Wales to lobby for a 'Yes' vote for Federation.

In 1899, aged 54, Maybanke scandalised Sydney gossips by marrying Francis Anderson, professor of philosophy at Sydney University and a bachelor 13 years her junior. Together the Andersons achieved a great deal of education reform in New South Wales, from the kindergarten to tertiary level and including teacher training, adult education at the Workers' Educational Association, and assisting with the establishment of children's playgrounds in inner-city areas where they were needed. They travelled, and moved to a new home, Maybanke, at Bayview. Free from the need to earn her living for the first time, and with adult offspring, Maybanke wrote tirelessly: Australian songs for Australian children to sing in the new [media]Free Kindergartens, reports, pamphlets on sex education and venereal diseases, the first local history of Pittwater, academic works and the first child care manual, Motherlore. For the last seven years of her life, the Andersons lived at The Haven in Hunters Hill, and she wrote its first local history. They were on a retirement trip overseas, Maybanke writing travel journalism, when she died unexpectedly 'after an operation'. Where she is buried remains a mystery. 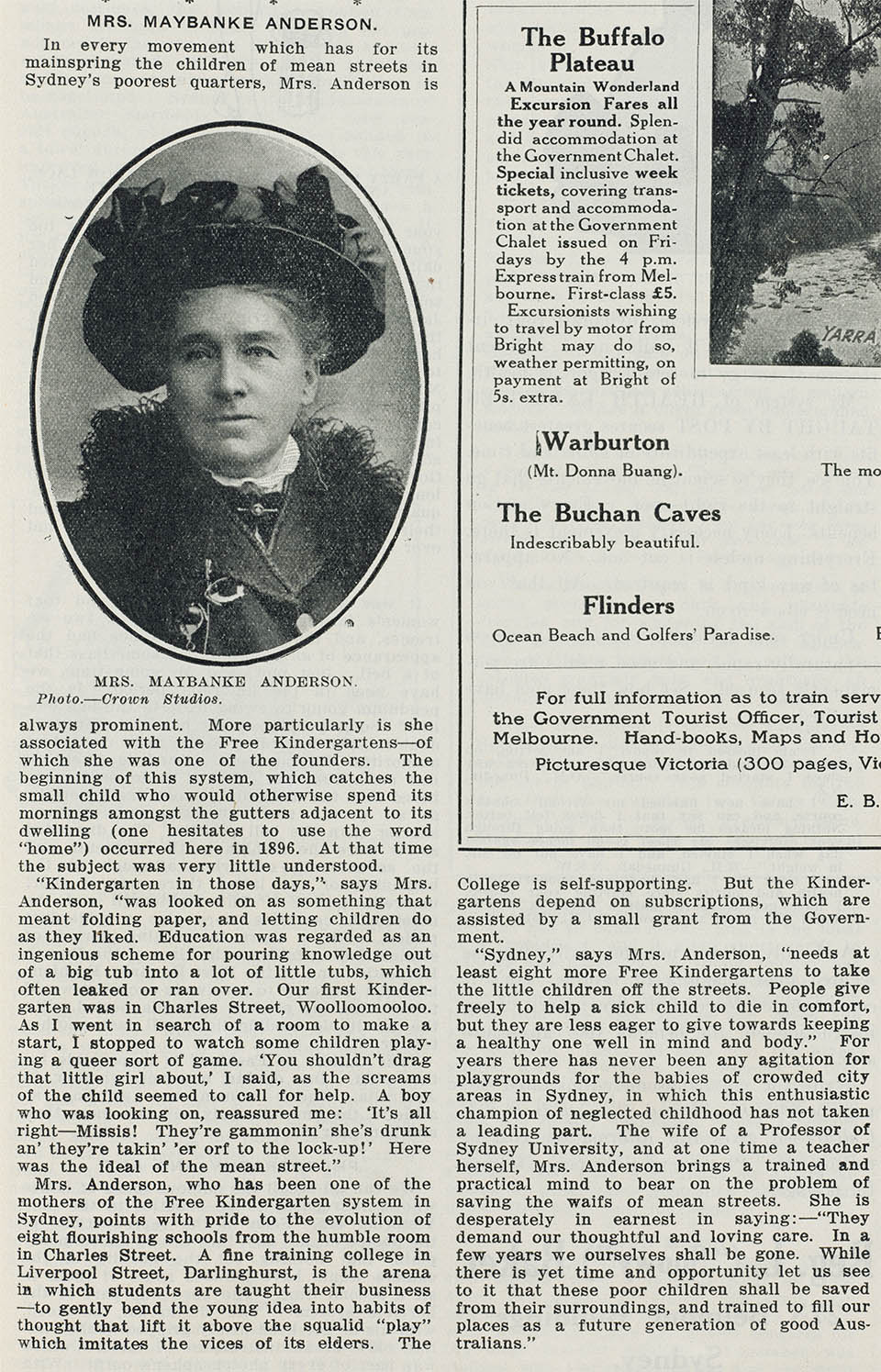 Maybanke Anderson's name is remembered throughout Sydney at locations where she lived and worked. These include Maybanke Kindergarten in Harris Street, Ultimo, and Maybank (sic) terrace flats, 23 Wharf Street, Birchgrove, where she and her husband and family lived adjacent to Normanton, the home of her brother Norman Selfe and their mother Bessie. At Frazer Street, Marrickville, in what was her home and school Maybanke Hostel is a Salvation Army home for elderly women, and there is a heritage order on the site. Maybanke Street in Bayview and Maybanke Cove in Pittwater at Bayview commemorate her home there – there was a bronze plaque to her at Maybanke Cove but vandals removed it. The sandstone Maybanke house above the site is fairly intact, though the grounds are subdivided. The terrace houses she lived in before her two marriages, 22 Lower Fort Street, Millers Point and Eversley in Rose Street, Birchgrove, are remarkably intact.

'No doubt this lady is about the most intellectual woman in Australia. Her radical notions shocked the staid old maidens of Sydney', [4] and 'one of the ideal women of her age', were typical newspaper descriptions of Maybanke Anderson during her life. It is appropriate to close with the sound of her 'woman's voice', because without the power of her words this woman who was so integral to the formation of democracy in Australia would not have been able to achieve her goals.

Those who believed that a woman's best work was to be a wife and mother ought to agree that that of a man was to be a husband and father. [5]

It can be no more right or expedient for one half of our population to make laws for the other half than it would be right for the people north of the 34th parallel to legislate for those south of it [6].

Indifference was a much more difficult enemy than open opposition. [7]

The English suffragettes mistakenly look upon the vote as a great weapon, whereas it is merely a useful tool. [8]

Religion is doing what you can for the welfare of humanity and developing your own spiritual life [9].