[media]The Anzac War Memorial commemorates the Australian and New Zealand Army Corps landing at Gallipoli, Turkey, on 25 April 1915. The enormous casualties suffered at Gallipoli – the first significant battle Australian troops participated in during World War I – came to represent the foundation of the Australian national identity. 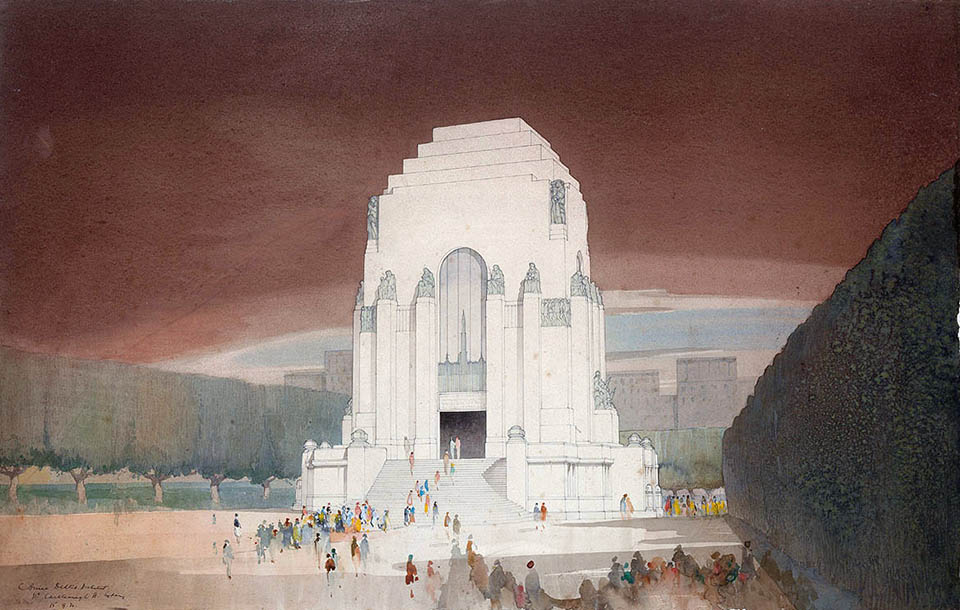 The first anniversary of the Gallipoli landing was commemorated with services in Sydney and around the country. The observation of this anniversary led to the establishment of a fund for a memorial to those who had died in the battle. War memorials were a particularly significant form of mourning, as Australia's war dead were not repatriated, but were buried on the foreign soil where they had fought and died.

For the remainder of the war, funds towards the construction of a memorial in Sydney were raised through public subscription. By 1918, more than £60,000 had been raised. It was then decided that the memorial should commemorate not only Gallipoli, but the other battles that Australian Imperial Forces had engaged in during the war.

Although a number of war memorials sprang up throughout Sydney's suburbs and in country towns, nothing was done about building one in Sydney until 1923, when the Institute of Architects suggested it should be erected in Hyde Park. This proposal was not acted upon, and instead a Cenotaph at Martin Place was constructed between 1926 and 1928.

After protracted debate about the form of a permanent memorial in Hyde Park, a competition for its design was held in 1929, with 117 entries received.

[media]The competition was won by the architect C Bruce Dellit in 1930. Dellit, at 31, was already one of the leading proponents of the Art Deco style in Australia, along with Emil Sodersten, the architect of Canberra's war memorial. Dellit had been trained in architecture at Sydney Technical College and Sydney University. His winning entry included bas-relief and brass sculptures on both the interior and exterior of the building, by George Rayner Hoff, who taught sculpture at Sydney Technical College. 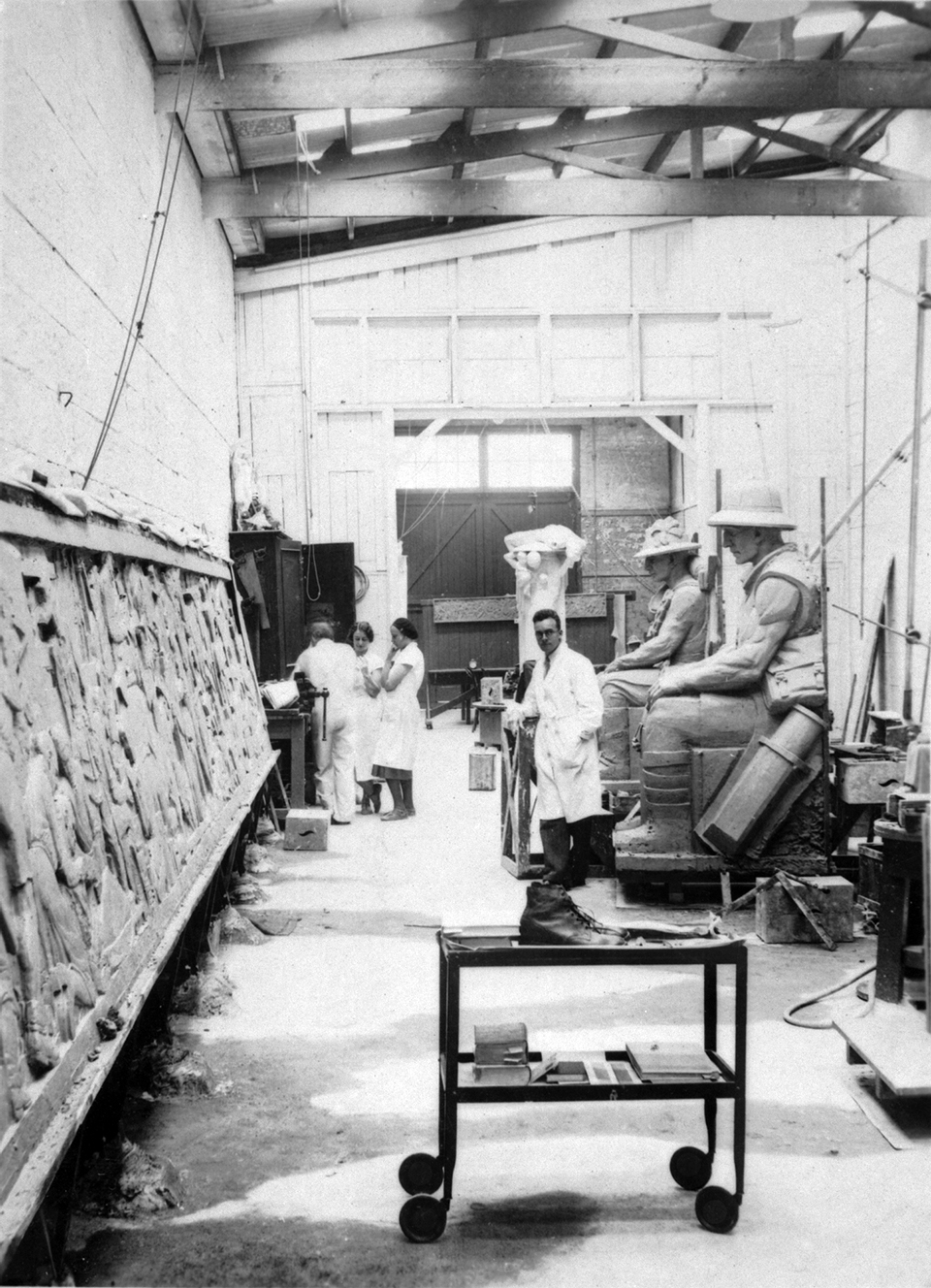 The foundation stone for the memorial was laid by Sir Philip Game, the Governor of New South Wales, on 19 July 1932, and it was completed just over two years later, using Australian materials and craftsmen. The building was constructed from concrete and clad in grey-pink granite quarried at Bathurst. The interior was modestly adorned with bas-relief sculptures and statues in marble, granite and brass, designed by Rayner Hoff.

The building was officially opened by the Duke of Gloucester on 24 November 1934. The wreath he laid is framed and on display in the memorial.

The landscaping of both the northern and southern halves of Hyde Park, with its radial, figtree-lined pathways, was carried out in the 1930s following the completion of the underground city railway. It is likely that the construction of the railway from c1916 to the 1930s – which involved the excavation of much of the park and widening of surrounding streets – was one reason the memorial was not built until 1932.

The memorial in its setting

The memorial is in the centre of the southern half of Hyde Park. It is best appreciated when approached from Park Street to the north along the main north-south axis of the park. Although the northern and southern facades of the structure are the same, the view from the north takes in the Pool of Reflection, which is especially potent at night when the memorial is illuminated.

The interior of the monument is reached by wide, sweeping stairs on the northern and southern facades. At the top of each stairway, the visitor is led into the quiet interior space of the memorial. The Hall of Memory is a cavernous, domed room clad in white marble, and sparsely decorated with bas-relief sculptures set high into the walls. The room is warmly lit by four elongated, arched, amber-tinted windows, which have been etched to match the bas-relief sculptures. The domed ceiling of this room is lined with 120,000 gold stars, which represent the men and women of New South Wales who served in the Australian Imperial Forces during World War I.

The architecture of the Anzac memorial encourages silent contemplation. A circular, wreath-like balustrade in the centre of the Hall of Memory, known as the Well of Contemplation, forces the visitor to look down with bowed head into the Hall of Silence onto Hoff's sculpture in the centre of this room. This brass sculpture, Sacrifice, depicts the body of a man lying naked on a shield, his arms resting on a cross-like sword and his head thrown back. The shield is supported by three women representing wife, mother and sister (or Courage, Endurance and Sacrifice). Hoff's centrepiece in the memorial shows his commitment to commemorating the personal losses and contributions of women in the war, as well as the war dead

The ANZAC Memorial (Bu ilding) Act 1923 was amended in 1984 to rededicate the memorial as a monument to all the conflicts in which Australian soldiers have served.

Although the Anzac memorial is Sydney's official memorial to the war dead, it is the Cenotaph in Martin Place that has become the focus for Anzac Day celebrations. Each year thousands flock to the dawn service. They arrive at 4.30 am in Martin Place for the service, then march to Hyde Park along George Street and Park Street. In 2005 – the 90th anniversary of Gallipoli – the Anzac Day march attracted record crowds of up to 250,000 people.

The Cenotaph and the Anzac War Memorial are very different memorials. The Cenotaph, located in the open space of Martin Place, is more suitable as a place of public ritual. The Anzac memorial is a much more enclosed space, more suited to private contemplation, largely because only a small number of people can enter at a time.

From 2005 to 2009 the Anzac memorial underwent repairs, refurbishment and adaptation but remained open to the public.