Sydney Tower [media]is a landmark that rises far above the city skyline. The tower is open to the public, and is one of the most prominent tourist attractions in the city. It is visible from as far away as the Blue Mountains and the Central Coast. Known by many locals as Centrepoint Tower, its official name has changed over the years. When AMP managed the Centrepoint shopping centre, the tower was officially referred to as the AMP tower. After the Westfield Group took over ownership of Centrepoint in December 2001, the name was changed to Sydney Tower. 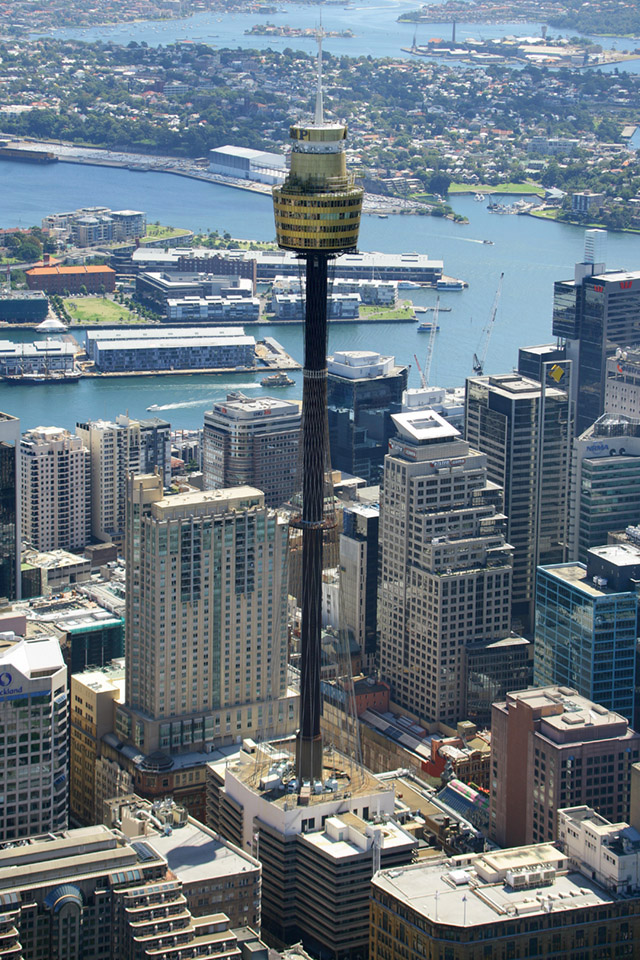 The tower was conceived in 1968 by the architect Donald Crone. His first designs were reputedly scribbled on the back of a napkin. Work began on the tower and its associated retail and commercial centre in 1970, with the first series of shops opening in 1972. The tower itself was completed and opened in 1981.

Reaching 304 metres high, it is the tallest building in the southern hemisphere. It belongs to an exclusive group of structures known as the World Federation of Great Towers. [1]

The tower is as much an engineering marvel as it is an architectural piece. Unique engineering solutions were applied during construction to manage the effects of wind, the anchoring of the structure and the lifting of the pieces to form it.

Construction of the turret and the tower proceeded simultaneously. The turret is made up of 46 individual prefabricated tubes which were erected one on top of the other. As the turret grew, the tower head was hydraulically jacked up the shaft. Lightweight, high-strength materials were used throughout, to reduce the overall weight of the finished building.

The tower itself is stabilised by 56 steel cables. They are attached from the underside of the tower through the roof of the building below and into bedrock. The turret is anchored by high strength reinforced concrete, also into the bedrock.

From its very beginnings the tower was surrounded by controversy, both over its design and its usefulness. Architects, artists and social commentators debated its merits, its design and its position. While Crone, the tower's architect, believes it to be an 'incredible design concept', others, such as Anthony Gaskell declared it an 'engineer's folly.' The columnist Leo Schofield was reported to have loathed the structure, describing it in 1987 as symbolic of a time when Sydney merely wanted landmarks. [2]

The tower's landmark qualities were used during the lead-up to, and the hosting of, the Sydney Olympic Games in 2000. During this time, the tower was adorned by three giant steel sculptures depicting a wheelchair basketball player, a gymnast, and a sprinter. The figures were placed atop the tower using an Erickson S-64 air crane, a heavy lift helicopter known as Elvis. These sculptures were removed in 2003 and relocated to Sydney Olympic Park at Homebush.

On several occasions, the tower has been used to launch fireworks or illuminated with coloured lights as part of various celebrations in Sydney, such as New Year's Eve and during the Olympics.

In 2004 Sydney Tower was nominated to be put on the New South Wales State Heritage Register for rare technical achievement.