While Italians had been coming to Australia through the nineteenth century, levels of immigration increased early in the twentieth century, largely due to restrictions placed on Italians entering the United States after the outbreak of World War I. The 1933 census registered 26,756 Italians residing in Sydney, with the suburbs of Woolloomooloo, Balmain, Glebe, Annandale, Leichhardt, Kings Cross and Darlinghurst being the main inner-city centres for Italians. Suburban Italian settlements were in Cabramatta, Canley Vale, Liverpool, Sutherland, Fairfield and Eastwood.

Similarly, a mass migration occurred after World War II where the migrants, unlike the prewar movement, planned to settle permanently in Australia. The growth of the Italian community in Sydney, one of the largest ethnic groups in Australia, was a major stimulus to the social, economic, political and community life of those with Italian connections.

[media]Located in the greater western Sydney region of Fairfield, the establishment of Club Marconi reflected a strong desire on the part of the Italian community for a social gathering place. Prior to the creation of the club, the early Italian migrants would congregate in backyard sheds to partake in festivities, feasting, dancing, bocce (Italian-style lawn bowls) and illegal transactions of alcohol. The need for a place which accommodated their festivities without disturbing their neighbours, and with a license to sell alcohol, was imperative. Thus the birth of Club Marconi in 1956 marked a milestone in Italian migrant history as it provided an authorised cultural hub for Italians and subsequent Italian-Australians. Today it is arguably one of the most famous landmarks in Bossley Park. It is a place where Italians display their pride, both in their cultural heritage and in the people and nation that gave them a new home and a future. [1] 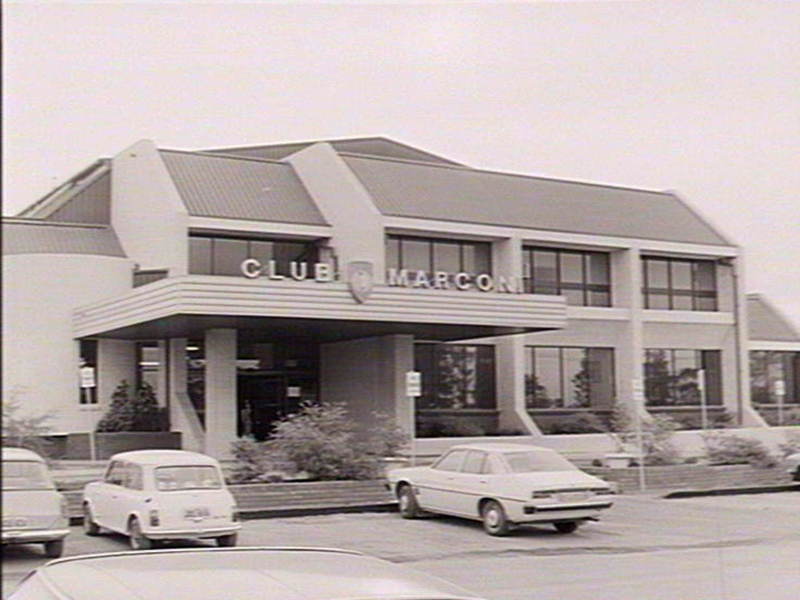 The club is located on 31 acres (12.5 hectares) of parkland at Bossley Park, with playing fields and a stadium. It currently has over 200 staff, and over 25,000 members of 18 different nationalities speaking 24 languages, making it the most cosmopolitan club in Australia. [2]

Although the club originated out of the desire to serve the Italian community, it has steadily diversified its activities and facilities to suit a variety of cultures and nations. The club continues to uphold its original cultural inheritance while maintaining its motivation to create a place which people of many differing origins can call 'home'. [3]

Origin of the club's name

The Club is named after the Italian scientist and inventor of wireless transmission, Guglielmo Marconi. On 26 March 1930 he had successfully switched on the lights at Sydney Town Hall from the port of Genoa in Italy, via wireless transmission, a distance of 22,000 kilometres. [4] And in that one phenomenal moment, Australia was closer to Europe than ever before. Marconi's scientific brilliance facilitated a connection between two very different nations through wireless communication. Thus his name was to prove naturally appealing to both Italians and Australians, and his name was suggested by the inaugural president Oscar Michelini at the second Provisional Committee meeting in September 1956. A year later at a third meeting, the club's name was settled upon as Club Marconi of Bossley Park Social Recreation & Sporting Centre Limited.

A statue of Guglielmo Marconi was donated by the Italian government in 1959, which is to be found today in the club's foyer with the inscription:

Guglielmo Marconi, 1874 – 1937, immortal genius of the Italian nation who first with science's wonders and spiritual wings linked Australia with the world. [5]

The club's emblem was designed by Guido Zuliani, a well known artist and photographer in Leichhardt. [6] The emblem is a symbolic representation of the relationship between Australia and Italy. It includes a globe signifying our planet that is interconnected by Marconi's invention of wireless communication portrayed as a telecommunications tower. A boomerang which sits in the middle of the globe is a symbolic reference to Australia's Indigenous people, with its colours of green, white and red representing the Italian nation. [7]

Three members in particular, Ruben Sartor, Provino Sartor and Lorenzo Zamprogno of the Italian community in Fairfield, took decisive steps in establishing a licensed club. They decided to visit an existing Italian club in Griffith known as the Yoogali club to understand the legalities and requirements of operating a social club.

The Yoogali Club was one of the earliest and largest ethnic clubs to be formed in 1946. Although most of its foundation members were Italian, it was never intended to be an 'Italian' club or associated with any particular province or region. Many 'top recording' Italian artists touring Australia performed at the Yoogali Club during the 1950s and 1960s. [8]

Upon returning from the Yoogali club, the men held a meeting was held at Provino's house with other local immigrants, including Rino Bagatella, Sebastiano Crestani, Oscar Michelini, Antonio Pessoto, Vito Angelo Pessoto, Provino Sartor, Ruban Sartor, Davino Zadro, Lorenzo Zamprogno and Andrea Zulian, [9] some of whom became the club's first board members.

The group advertised for support in establishing the club through local newspapers such as the Advance, The Biz, and in the Italian media, La Fiamma, Il Corriere and Risveglio. [10] An offer of land for $6,900 without interest, made by the Sartor brothers, was finalised as the club's location. This was a plot at the corner of Prairie Vale Road and what was then Middle Road. The building process began in 1956, due to the generous donations of some 300 people who attended the club's first meeting, each of whom donated $300 or more towards the realisation of the club. [11]

The first club building was completed in 1958 under the supervision of the building subcommittee, and builders Lorenzo Zamprogno and Gisberto Benedetti, on a budget of $120,000. Such was the success of the club that the first set of extensions was commissioned in early 1962, by the architect Cavalier, [12] at a cost of $90,000; these were completed in November 1962.

Land around the club was acquired successively in the early 1960s, with the block opposite the club bought for $16,000 in 1960, and the adjacent picnic ground bought for $12,000 in 1962. By 1966 the club's growth and dominance led to Fairfield Council changing the name of Middle Road to Marconi Road.

A number of further extensions to accommodate different activities were added between 1970 and 1990, including the tennis and squash courts, covered bocce courts, a children's playroom and a football stadium. In 1990 the first car park was completed, followed by a second addition in 1998. The sport centre was completed in 1999 along with the construction of a gym in 2003, a child care centre in 2005 and an outdoor gaming area in 2008.

A range of services are provided by the club, including the Marconi poker palace, the Bodyworks Life gym, the Marconi tennis and squash centre, the Marconi Early Learning Centre, a Ticketek office, a Marconi Silver Service courtesy bus, various sporting facilities, and function rooms. There are also three dining places catering for a wide age group and various tastes, including the Piazza, an Italian cafe, Oscar's Trattoria serving Italian home-style food and Star Buffet which serves a variety of international food. There is now regular entertainment, with shows and dancing sessions

'Should wives be accepted as members?' [13] This was one of the first questions raised in the club's first board meeting in 1956. However it was not until 9 December 1962 that the women's auxiliary was formed, giving women equal membership rights with their male counterparts.

The ladies' auxiliary was and still is responsible for organising activities tailored for women and families, such as ladies' nights, mothers' and fathers' day celebrations, Gala days, Valentine's Day celebrations and other festivities that were different from the earlier male-oriented activities, such as bocce, drinking and gambling. It is worth noting that the Marconi Club was the first club of its time to initiate full club membership status for women. Today it would be hard to imagine the club's presence without the contribution of women.

Marconi supports a number of sport associations (17 or more) that provide for state-of-the-art resources and training to all ages at all sporting levels. [14] In particular the club has a longstanding association with the Marconi Stallions premier football (soccer) team, since it was founded by the Marconi Club and is about two years younger than the club. Formerly known as Marconi Fairfield, the football team is supported by Italians and Italian-Australians, and is currently a member of the New South Wales Premier League, playing home games at Marconi Stadium in Bossley Park. [15]

There is also a women's football league team, which established itself in 1992 as a first grade team.

Today the Club provides venues and function rooms for a diverse range of cultural communities, for example hosting games of mah jong, and commemorating the Moon Festival to celebrate Asian cultures. Although the Italian community in Fairfield isn't as prominent as when the Marconi Club started, the sense of community pride is still alive in its members.