[media]Thomas John Ley was born at Bath, Somerset, England on 28 October 1880. He came to Sydney with his mother and three other siblings in 1886 after the death of his father. 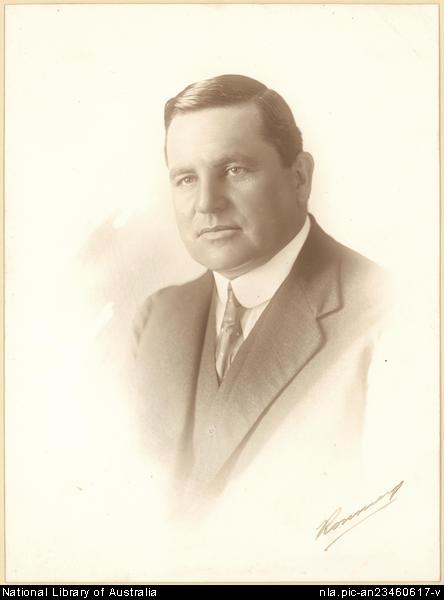 Ley had little formal education, having left school at 10 to help his mother run a grocery store. Attracted to the legal profession, he took on a number of junior positions in various Sydney law firms and finally became a solicitor in 1914. Earlier, in 1898, he had wed Emily (Louisa) Stone Vernon with whom he had three children. Louisa's father was a wealthy Somerset medical practitioner.

Ley was a man of ambition. In 1907 he moved from Glebe to the infant suburb of Hurstville. There he entered local politics and involved himself in various community groups and Protestant organisations including the Presbyterian Debating Society. His championing of prohibition and work in the temperance movement earned him the epithet 'Lemonade Ley'.

After a number of failed attempts to become mayor, Ley focussed on state politics. In 1917 he became the National Party member for Hurstville in the NSW Legislative Assembly. He was a zealous advocate for conscription.

Ley's public persona as a pious pillar of respectable society began to crumble. Hated by people in his own party for his smug manner, Ley's term as minister for justice (1922–25) exposed him as both a hypocrite and bitter sectarian. Dishonesty over his position on the prohibition plebiscite marred his reputation with the temperance movement. And his stern rejection of community demands for clemency for Edward Williams, a destitute and demented music teacher who had murdered his three daughters, led to public protests.

Ley stood for the federal seat of Barton in 1925. Allegations were made that he had tried to bribe his opponent, Frederick McDonald, to drop out of the election. Ley won and McDonald moved to have the election declared void. On his way to see NSW Premier JT Lang about the matter, McDonald disappeared without trace.

Failing to gain a federal ministry, and remaining on the backbench, Ley formed his own legal firm of Ley, Andrews and Company. The firm, however, was associated with shady business dealings and Ley faced public criticism. One of his leading detractors, conservative politician Hyman Goldstein, was discovered dead at the bottom of cliffs at Coogee on 3 September 1928.

In that year, a discredited Ley was soundly beaten in the federal elections. He departed for England with his mistress, Maggie Brook. Brook's husband, like Goldstein, had earlier died in unexplained circumstances.

Ley was subsequently engaged in dubious or illegal activity in Britain, including involvement in the black market during World War II. In March 1947 he was found guilty of planning the 'Chalkpit Murder' of John McBain Mudie, Maggie Brook's supposed lover. Ley's death sentence was commuted and he was imprisoned in Broadmoor Criminal Lunatic Asylum, Berkshire, where he died four months later.