[media]In December 1832 a group of prominent colonial gentlemen, including the physician, landowner and constitutional reformer Sir John Jamison, petitioned Governor Bourke for a portion of land to be set aside for development of a racecourse close to the Botany Road. A number of racecourses had been laid out at earlier times around Sydney, all of which had ceased running for one reason or another. The Surveyor-General, Thomas Mitchell, accompanied by Edward Deas Thomson, surveyed the ground – Mitchell reported no objection and endorsed the site. [1] 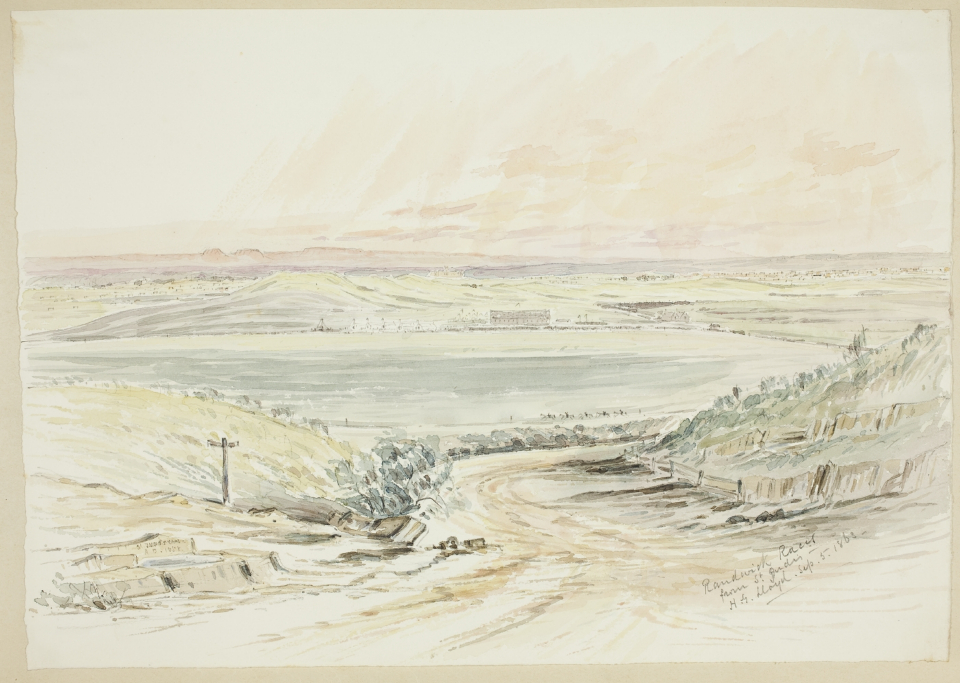 [media]Initially known as the Sandy Course due to the nature of the land at Randwick, the track was laid out using convict labour to a plan by Assistant Surveyor Mortimer Lewis. Racing began at the new course in the autumn of 1833 and lasted until 1838. As had happened with the courses before it, the initial enthusiasm soon waned, with Randwick's relative isolation and the increasingly rowdy nature of the meets deterring Sydney's elite from attending. Without their patronage, the course closed.

The Australian Jockey Club and Randwick

[media]Racing returned to Randwick in 1858. This was preceded by the establishment of the Australian Jockey Club (AJC) in 1842. What became known as the AJC was initially known as the Australian Race Committee (1840), a group of race enthusiasts who came together to bring some order and permanence to the Sydney horseracing scene. As the AJC, then racing at Homebush, they began searching for a site to establish a permanent race course, which they [media]hoped would allow for better facilities, more membership and in turn better horses, jockeys and races. The AJC approached the government for a grant to the old Sandy Course to re-establish regular racing there. Led by their president Deas Thomson, who had been the driving force behind the first Randwick course, the AJC secured the land and began a campaign to raise money to improve the old track, including building new running rails and a timber grandstand to seat 700, clearing vegetation and laying turf. The first race meeting was held on 29–31 May 1860, with a first-day crowd of over 6,000. [2] 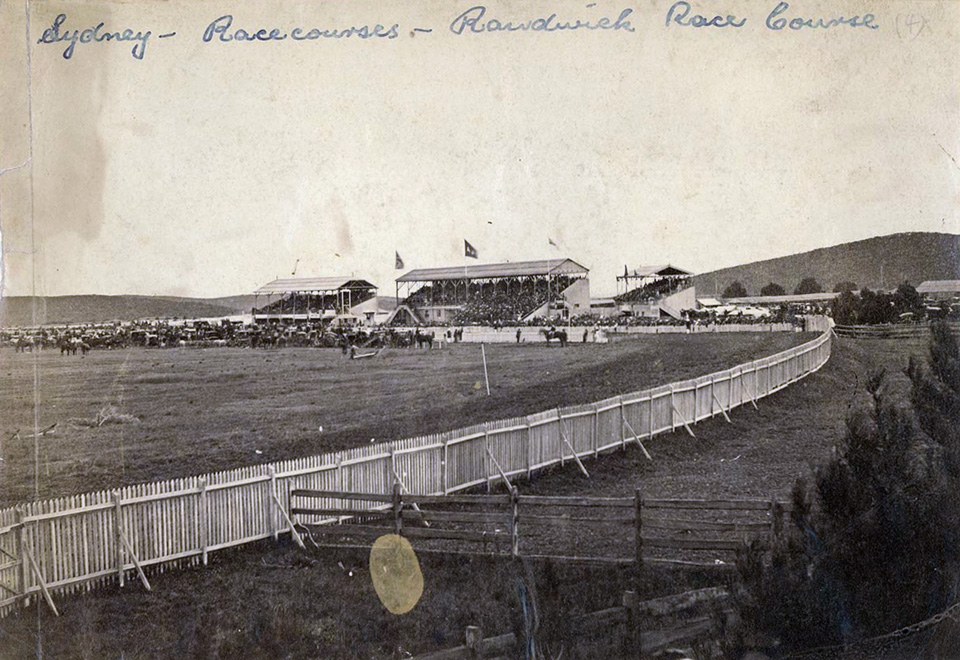 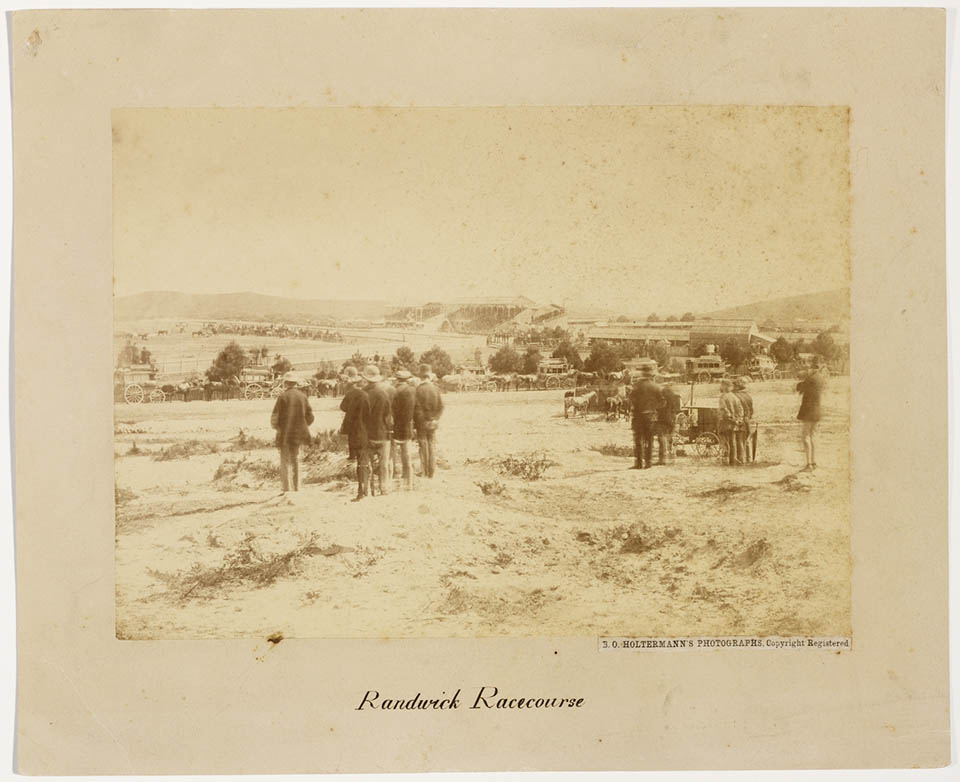 By 1863 the AJC had [media]secured a lease of 202 acres (81.7 hectares), after which they began to consolidate their holdings. In 1873, the tenure of the AJC was confirmed via the Australian Jockey Club Act, which extended their seven-year lease to 21 years. During this period, two new grandstands were erected, the Derby Stand in 1865 and the St Leger in 1867, and the original 700-seat stand was replaced in 1875 with a larger stand, including private boxes, reporters' room and telegraph office. Then, between 1880 and 1886, the two 1860s stands were in turn demolished and replaced with the new St Leger in 1882 and a new Official Stand in 1886. 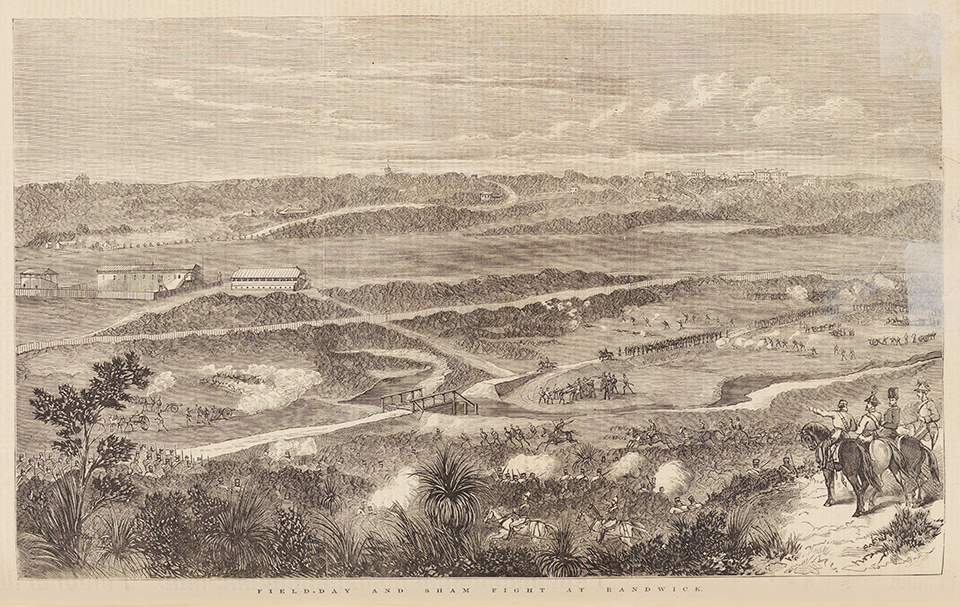 As well as the new [media]stands, the AJC undertook an extensive works program throughout the later part of the nineteenth century to formalise the racetrack and its facilities. The course was enclosed with a perimeter fence and formal entry ways, admission was charged for entry, and stables, race-day stalls, public enclosures, and amenities were built. 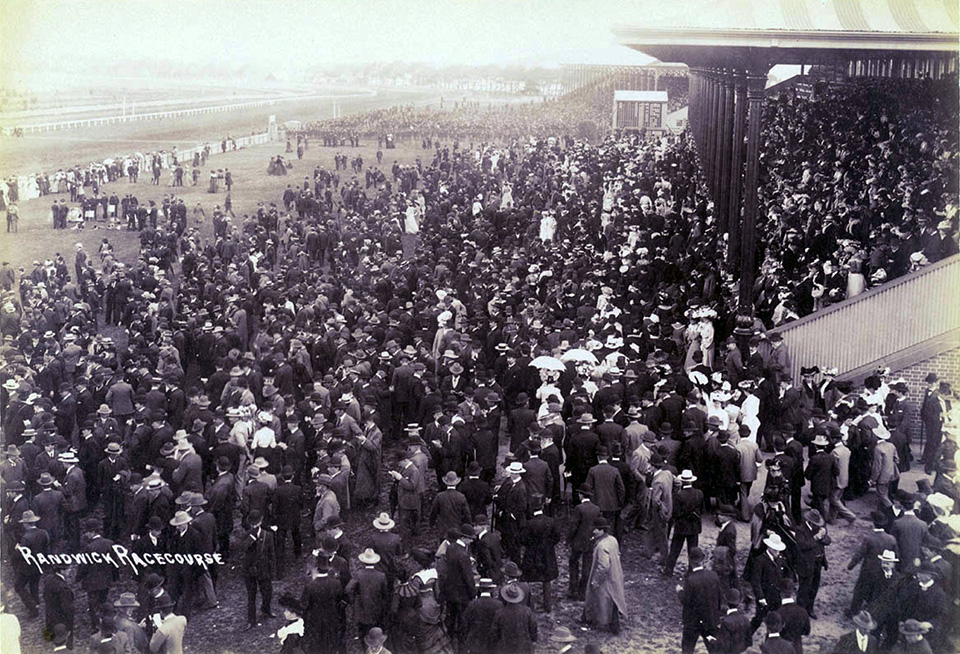 The largest [media]project was the extension of the tramway to the racecourse. Tram lines were laid from the city to Alison Road, terminating outside the racetrack entrance. This was the first extension of the Sydney tramway system outside the city boundary. Opened in time for the Spring Carnival in 1880, by 1900 the system was so popular that a dedicated tramway loop station was built to serve the racecourse alone. At their peak the trams carried a record 117,480 passengers in 664 tram cars on one day in 1934. [3] 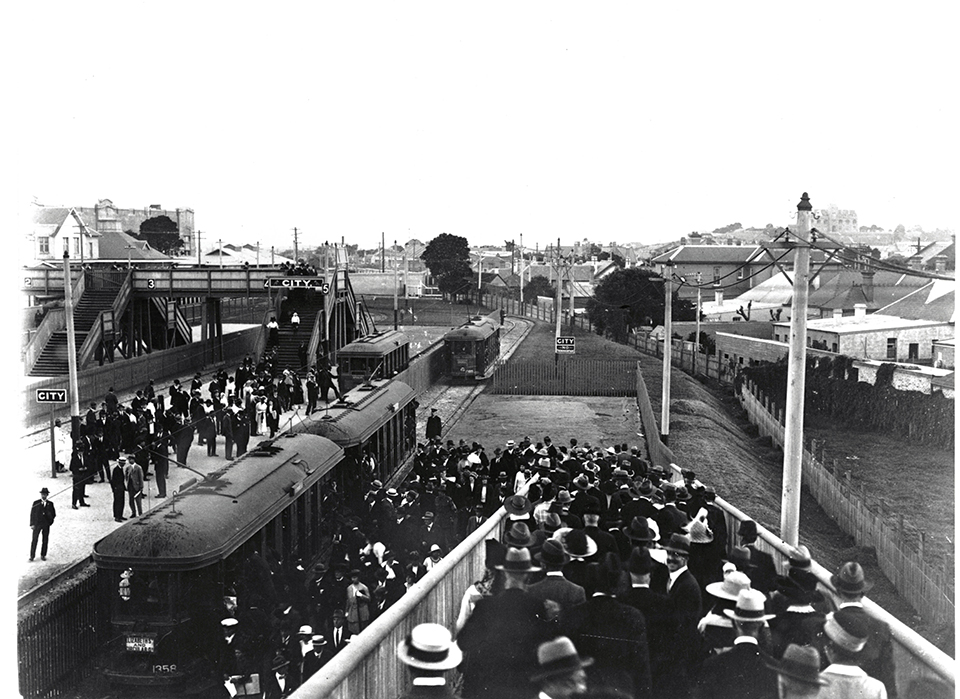 Randwick in the twentieth century

During World War I, and again in World War II, Randwick racecourse was used by the military as a camp for embarking soldiers, with tents erected in the infield area and some of the site occupied by temporary buildings. The racecourse continued operation during these periods, with the AJC contributing some of its profits to various patriotic funds in appreciation.

Throughout the [media]twentieth century, new stands were built and works were carried out, as money allowed and increased crowd size justified it. Many of the stands and buildings built in the first half of the twentieth century were designed by the Sydney firm of Robertson and Marks, creating a consistent appearance of design across the site. Robertson and Marks had already been involved in a number of other sporting ground collections, most notably those at the nearby Sydney Cricket Ground. 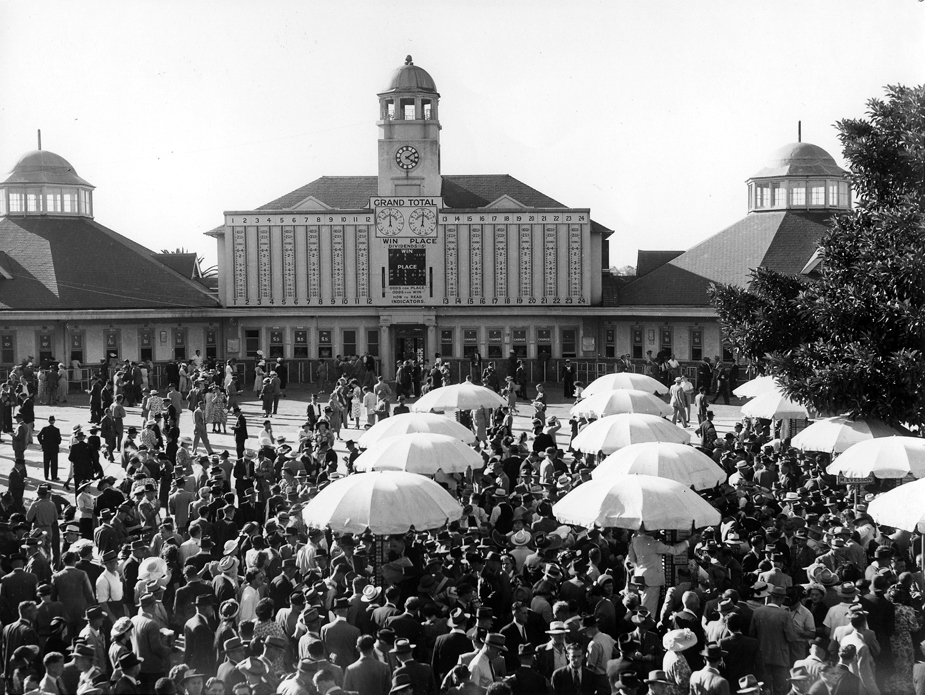 Much of the [media]colour of the race day meetings has been provided, not only by the action on the track, but by the spectators and the on-course bookmakers. The interaction between these two groups and the actual racing has often been commented on. One of the most famous to do so was Andrew 'Banjo' Patterson, a regular visitor to Randwick, who was an accomplished steeple chase rider, writer and racing enthusiast. Patterson wrote a weekly racing column for the Sydney Mail , and published at least one verse, 'The Oracle' (1917), on the Randwick races. The size of the grounds was also handy for special events, such as the landing in Sydney by Charles Kingsford Smith and Charles Ulm in the Southern Cross in 1928, following their trans-Pacific flight from the USA. 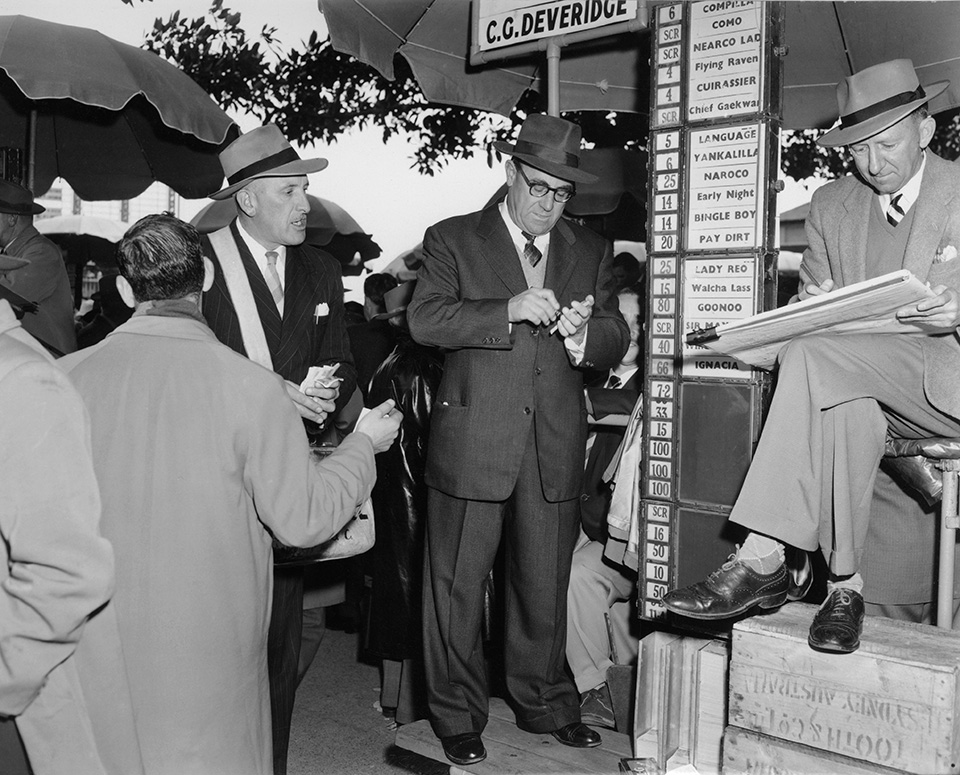 Major [media]upgrades of the racecourse have occurred at regular intervals since the 1960s, with large new modern stands erected, and new and improved stabling and horse training facilities and onsite amenities built, including drug testing laboratories. To increase revenue and use the space during non-racing periods, alternative uses have been allowed, including rock and other music concerts, social events and three papal masses (1970, 1987 and 2008), attracting crowds of over 200,000 people each time.

The [media]position of the racecourse places it at the end of an almost continuous green belt running south-east from Moore Park and including the Sydney Cricket Ground, Centennial Park and Moore Park golf course. This remains as a reminder of the public common set aside by Governor Macquarie in 1811 and a rare expanse of historic parkland in an otherwise congested suburban expanse. The racecourse predates the residential development of the eastern suburbs and some commentators believe it caused the first stirrings of the area's development in the 1830s. [4] The racecourse has always supported an array of local related industries, such as stables, farriers and saddle makers in the Randwick and Kensington area. 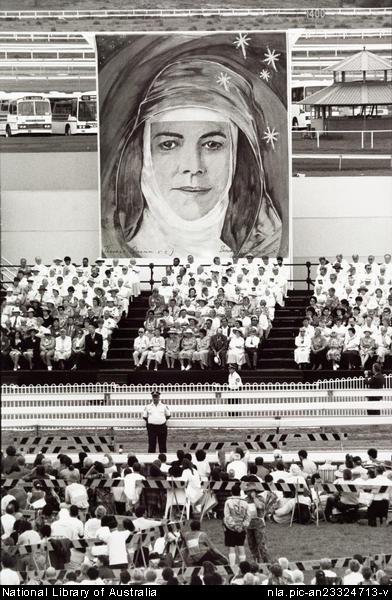