[media]After the steam tram service from Kogarah Railway Station began in 1887, the small community of Sans Souci served increasing numbers of picnickers and day visitors. The tidal baths, providing safe access to the clear waters of Georges River, were a welcome addition and their popularity was ensured from the beginning. The baths remained active for the following sixty-five years and became a great attraction, enhancing San Souci's reputation as the 'playground of Sydney's south'.

Kogarah Council made the first tentative move towards establishing tidal baths at Sans Souci on 25th March 1891. [1] Five years passed before a decision was made to proceed. The site chosen was between The Government Wharf and Hughes' Boatshed in what is now Water Street.

The baths eventually opened to the public in late January 1897. Mrs Jane von Hammer took up the lease, assisted by her extensive family. Jane was the widow of Lieutenant Ferdinand Augustus von Hammer Snr and matriarch of a celebrated swimming family in Sydney that had previously managed other baths including those at nearby Brighton-le-Sands.

The original baths at Sans Souci were basic, with simple iron sheds serving as changing rooms for the segregated swimmers. The adjoining waterfront to the east included three boatsheds, two refreshment rooms and the charming old Sans Souci Hotel that had stood on Rocky Point since the early 1840s.

The turn of the century saw the baths play an important part in the history of Australian sport. On Saturday 6 January 1900, a section of The Biennial Australasian Championships were held there. The championships were run at four different venues across Sydney and swimmers came from most states and New Zealand.

In February 1900, a well-known Sydney swimming identity, Harry 'Bull' Hellings, took over the lease. Hellings was formerly the honorary handicapper for the New South Wales Amateur Swimming Association. He promoted the San Souci baths strongly, claiming they were the 'largest baths in Sydney' and adding that trunks and a towel were both available for hire. He remained for one season only before handing over the lease to Peter John Baalman in January 1901.

Baalman, migrated to Australia from Germany in 1875. He became proprietor of the baths, an oyster farmer and the owner of a boatshed just along the rocky waterfront. Baalman's first lease lasted only one season but he returned in October 1902. He stayed on until the end of the season in 1911, making him the longest serving leaseholder of them all.

Harry Mulchay, an ex-champion diver, [media]held the lease at the baths for the 1901–1902 season. Harry presided over the Nautilus (Kogarah) Club's carnival at Sans Souci that season where he arranged for: 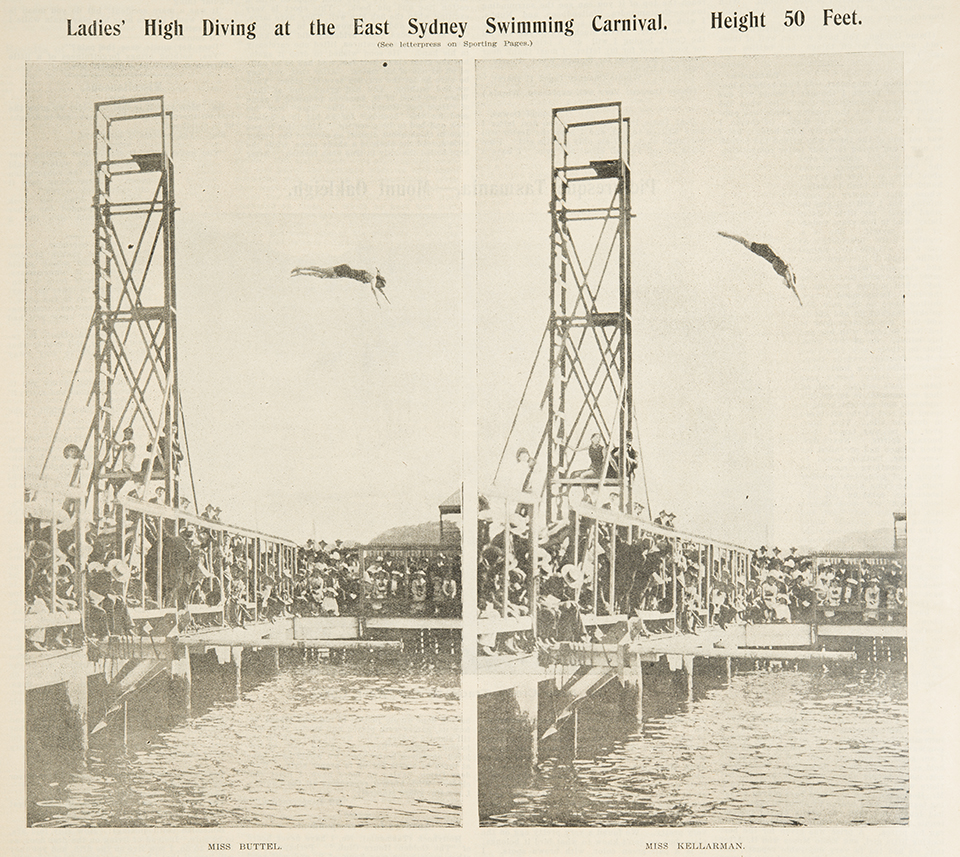 Miss Kellerman and Miss Buttel, two lady champions', to give an exhibition of, 'high and fancy diving and swimming. [2]

'Miss Kellerman' was Annette Kellerman who, in early 1902, was just 16 years old and at the beginning of a stellar career.

In March 1916 the long-anticipated vehicle punt between Sans Souci and Taren Point commenced, opening up a faster and more convenient route to Cronulla and the Sutherland Shire and enticing more visitors to the Sans Souci waterfront village. William Harvey and Henry Alexander took over from Baalman but the baths were falling into disrepair and by 1927 the council's engineer was recommending their demolition and replacement with modern baths.

[media]Nothing eventuated until 1929 when SW Lucas was appointed as the temporary architectural draftsman for the baths section of the project. [3] During 1929–1935 work was prolonged and completion of the new baths was delayed by lack of finance and the emergence of an ambitious plan for a complete makeover of the adjoining land (Sans Souci Park) into a significant public recreational area. The reclamation of land, dredging of the river and construction of a seawall completely changed the natural character of the rocky foreshore. George Hughes' iconic boatshed, which had passed into the hands of the St George Sailing Club in 1927, was demolished in the process. 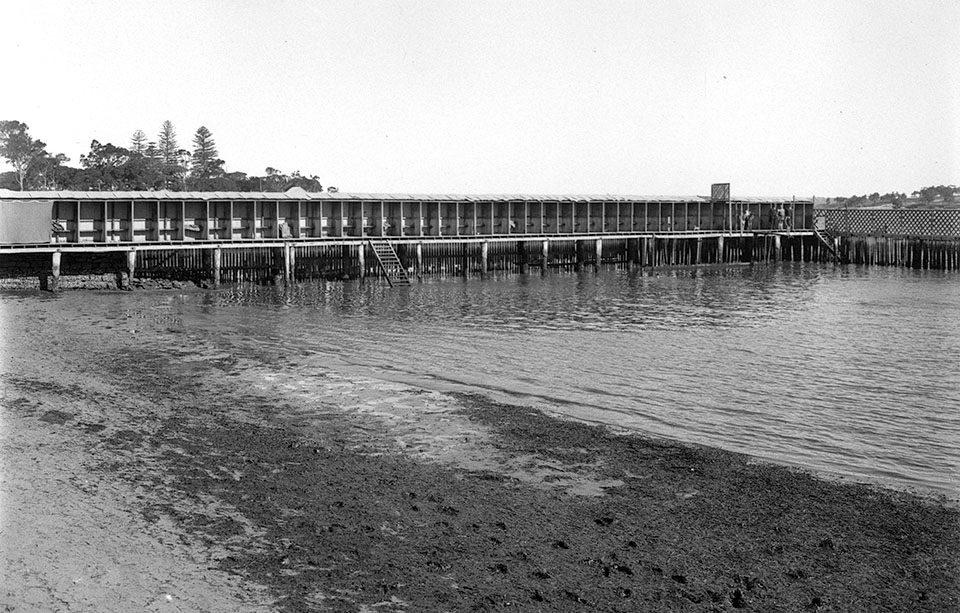 The second phase of the new baths was the construction of a concrete dressing shed. Tenders were called for on 11 July 1933. Charles Frederick Gage, of Payne and Taylor streets Kogarah, won the tender with a quote of £2,528, well under the council's anticipated price of £3,500 pounds. The bathing pavilion was erected with funds granted under the Emergency Relief Work Scheme in accordance with the New South Wales Prevention and Relief of Unemployment Act, 1930–1932. [4] The building reflected the Art Moderne architectural style, one of the many stylistic trends within Art Deco. [5] The architect for the baths was obviously in touch with American ideas and Gage put those ideas into practice.

The new Sans Souci Bathing Pavilion was officially opened on Saturday 25 November 1933 and included dressing rooms, lockers and a casualty room. The pavilion was described in the local newspaper, St George Call, in some detail:

On entering the front of the main entrance, stairs opening each way lead down to the manager's office, beside which is casualty and ambulance room. The ladies' dressing shed open to the left, and is fitted with cubicles for privacy in dressing, and 100 lockers for the use of patrons. The gents' shed is similarly appointed, four showers being installed in each. Special air vent passages keep the sheds cool, light and sanitary. At the entrance to the sheds from the waters, is a small pool, placed there so that bathers may wash the sand from their feet when entering to dress.' [6]

The pavilion was of course only part of the reforming of the baths, as the infrastructure of the bathing area was completely rebuilt:

The pool at low water is about 110 yards by 75 yards swimming area, and the bottom has all been dragged and cleaned. Old piles, which were a menace for some time, have been removed and shark proof wire fencing erected. [7]

The new baths were operated by John Edward Tyerman who lived at 50 Plimsoll Street, Sans Souci, a mere 500 metres from the baths. Tyerman proved to be the most popular operator of the baths and was in charge from November 1933 to April 1940. He had a policy of 'safety first' and on busy summer days he employed a number of lifesavers, both professional and amateur, to patrol the baths. Tyerman would not tolerate 'loutish' behaviour. The Kogarah Council received many unsolicited reports of Tyerman's diligence in keeping the baths in immaculate condition and his dedication to running the baths for the enjoyment of all. For many these years saw the tidal baths at their finest. Through the remainder of the war years JE Jenkyns and SG Milham were successive leaseholders.

By 1958 the council was experiencing difficulty in leasing the tidal baths and some operators struggled to make ends meet. The 'golden era' was over. In 1962 the decision was taken to replace the tidal baths with an Olympic pool and this was opened on 18th September 1965, just one year after the Captain Cook Bridge was completed. In 1973 part of the baths area was resumed for the Sans Souci Water Police building. Despite pollution in the George's River, the now reduced tidal baths were still used by some swimmers until the early 1980s.

The dilapidated pavilion has remained a council asset. In 2002, and again in 2004, the council called for expressions of interest to redevelop the building into a restaurant. Negotiations stalled but in late 2013 there were further signs of interest in redeveloping the site.

Philip Geeves and James Jervis, Rockdale: It's Beginning and Development, The Municipal Council of Rockdale, 1954