[media]It is difficult to write about a hotel that has been demolished and now exists in the minds of people who are gradually dying, although their reputations and work live on. For many, the hotel lives on as a legend. I once said to the writer Donald Horne, who drank at the Newcastle Hotel, that he should write a book titled, 'Everything an Australian Should Know'. He said he would rather write a book titled, 'Everything Every Australian Should Forget' . I don't think we should forget the Newcastle.

In deciding to recall and record something of the Newcastle Hotel (which was once on the corner of George and Essex street, Sydney, demolished in 1973, and where now stands part of the Grosvenor Place complex) I was faced with the writing challenge of recreating something which was not architecturally unusual (there were hundreds of Sydney hotels built like it in early twentieth century) but in its walls were played out a million interactions, conversations and introductions among maybe a thousand people who drank there over its seven decades. And where started probably a thousand affairs and even some marriages.

Many of those people who drank and talked there have gained a place in the histories of the arts, writing, university careers – Germaine Greer, Clive James, Robert Hughes, Lillian Roxon, Bob Ellis, Richard Neville, Richard Walsh and Martin Sharp – and while some have faded with the hotel, which is not to place special value on 'achievement', some of the people who drank there were creatively idle in delightful, ambitionless ways. [1]

Historically, I surmised that the Newcastle became something of an arty and intellectual hotel sometime in early twentieth century when the then largest Australian publishing house, Angus & Robertson, [2] had offices in lower George street near the hotel (taken over and moved in 1970) as did the staff and contributors of The Bulletin, [3] then Australia's major weekly magazine (founded in 1880 and ceasing publication 2008; Donald Horne was one of its editors). Because of the low rent flats in lower George Street and the old houses at The Rocks nearby, and the presence of the major art school founded by Julian Ashton that moved to The Rocks in 1933 and still exists there, many young students and staff lived in or near the Newcastle and many artists used the hotel – artists such as John Olsen, Michael Johnson, Brett Whiteley, Nigel Thomson and Salvatore Zofrea.

[media]As a building, the Newcastle was a typical two storey Australian pub. Maybe it had upstairs rooms that could be rented, I never knew anyone who stayed there so I had never been upstairs. It had a 'back bar' sometimes known in hotel language as a 'saloon bar' and later a 'club bar' where you paid a little more for a drink which was intended to sort out the classes so that workers and bosses didn't meet. 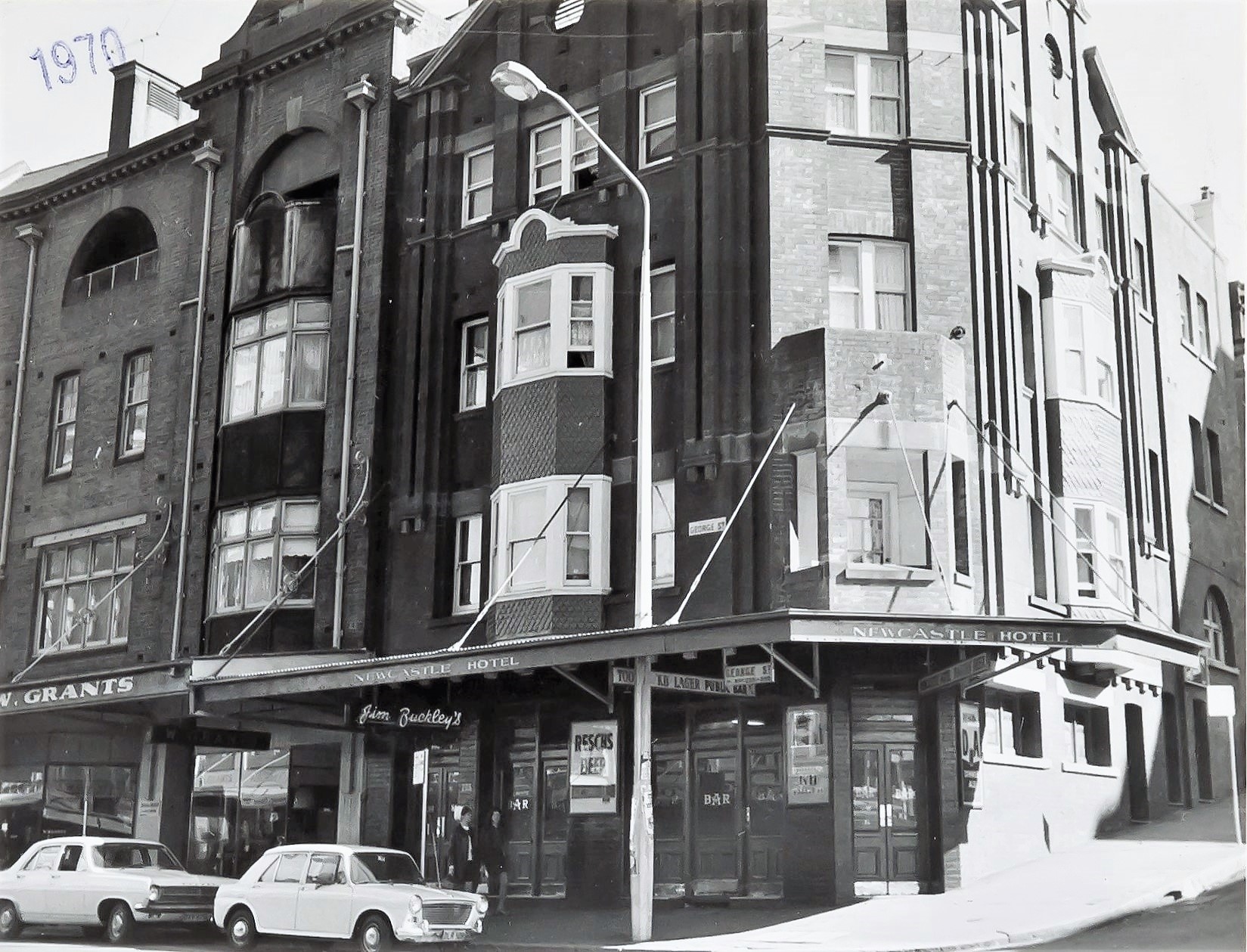 The back bar of the Newcastle was carpeted and it had a modest chandelier. A soda siphon would be on the bar for those who wanted to freshen up their scotch or add just the right amount of soda they wanted with their whisky. In the sixties when I began going to the Newcastle, this bar was occupied by people from the advertising agency George Patterson, which occupied the Bulletin building after it moved to the Australian Consolidated Press building in Elizabeth Street. There was some mingling between front and back bar.

The Newcastle's large front bar had a three-sided service area in the centre of the public bar from which barmaids worked, serving the bar's three sides. On the north side was a darts board but my crowd never played darts. It had an awning above the footpath held by steel rods to the upper story – earlier hotels had veranda posts to hold up the awning.

In this front bar academics, writers, journalists, bohemians, free thinkers and students gathered in the late afternoon and drank, usually spilling out onto the street, until they went to dinner. The publican Jim Buckley bought paintings from down-and-out painters and hung them in his bar, and now and then had art shows. I once worried that if you drank surrounded by bad paintings (they were not all bad) it might damage one's aesthetic eye.

Some of the painters who frequented the Newcastle were Julian Ashton, Dorrit Black, George Lambert, Sydney Long, Norman Lindsay, Thea Proctor, Arthur Streeton, among others. [4] Jim was considered a soft touch and there was a collection of bounced cheques pinned to one wall. Jim always wore a three-piece suit, tie, and chest pocket handkerchief and when cancer took his voice he would talk in a croaky way with the aid of a neck microphone.

When I began going to the Newcastle in the 1960s it still carried on the pre-WWII connections with journalism, the arts and bohemia but was now frequented by people from advertising – copy writers and illustrators and so on – and students and staff from the University of Sydney and, during the 1950s, students and staff from the University of NSW, especially on a Friday night. Workers Education Association (WEA) adult education students also went to the Newcastle after their lecture rooms were moved to Margaret Street.

I met Rosemary Creswell when she worked as an office girl at the radio station 2SM, also nearby, and went to adult education classes at the WEA. She was beautiful and witty. She would go to long, boozy lunches, leaving a cigarette burning and an open packet of cigarettes on the desk with her lighter (in those days you smoked in the office), and her jacket on the back of the chair and handbag on the desk. If anyone asked for her the other girls would look at her desk and say she must be around somewhere her cigarettes and handbag were still on her desk. At the age of 25 she won a mature aged bursary to the University of Sydney from her work at the WEA classes. She got her Bachelor of Arts with first class honours and won the University Medal. After graduation she became a remarkable literary agent – the agency became known as Rosemary Lunchwell and Associates

A dynamic core of those who went there in the sixties was known as Libertarians, part of a loose wider group known as The Push. The Push took the name from the late nineteenth century and early twentieth century Sydney street gangs known as 'pushes'. The Rocks Push was especially well known. Architect Philip Cox and some of his colleagues from University of Sydney used to go there. [5]

Academics and arts people and bohemians from other states began coming to the Newcastle when they were visiting Sydney knowing it as a club where they could find like-minded people. I cannot recall any violence at the hotel. There was no bouncer.

I once had a conversation with Professor David Armstrong in the bar, a leading philosopher, right-wing in his politics, and he said something about the Newcastle being the only place where left and right in politics could have amiable discussion. I disagreed, I said, because the right wing, which gathered around the CIA-funded Congress for Cultural Freedom and their magazine Quadrant , could never be trusted in casual conversation because the CCF mixed with people who worked for, or were informers for ASIO. Conversation with right-wingers in the Newcastle had to be restrained, guarded. For example, if, say, a writer was going to a visit Communist China on a communist funded trip, or if it was known that a politician was having an affair with a young communist, or whatever, this could be fed back to ASIO either as gossip or intentionally. He found this argument disconcerting. In retrospect I am sorry I made such an issue about it. But that was how we talked and that was who you were likely to meet at the Newcastle.

The hotel was unusual even in the 1960s for allowing women to drink in the public bar rather than in what was known in most hotels as the 'Ladies Lounge'. There were no stools and drinkers would drink standing shoulder to shoulder, drinking mainly beer in middies or schooners with the women tending to drinking Pimms, gin and tonic, brandy or shandies (lemonade and beer). There were no cocktails.

I was economics editor for the ABC news in the late 1960s which meant I went to the stock exchange and collected press releases and went to annual meetings of businesses and so on. I had finished my work for the day and went to meet my friend Norma Crinion at the Newcastle, who was a secretary, one of those intelligent women denied by chauvinism from work appropriate to their talents, and she said that my big story of the day would lead the news bulletin. I said 'What big story?' She told me that Australia had discovered oil offshore. I said, 'What do you mean? What's so special about an oil field?' She said that it was special because Australia had never had oil. I stared at her. I then borrowed someone's afternoon newspaper (in Sydney there were two – the Sun and Mirror) and yes, the discovery of huge oil deposits on Barrow Island was front page news.

Back at my office the ABC newsroom must have been waiting for my story (if there'd been mobile phones the chief of staff would've been calling me every ten minutes). Sweating, I pieced a story together there in the bar from both the papers while Norma, who was not only well-read and bright but was also well-connected, called a friend in the oil business who gave her some other additional facts and quotes which she took down in shorthand. I then phoned the story through to the copyroom from the bar, just in the time for the 7pm main bulletin. The ABC came very close to missing the most important story of the decade and I the sack, and our story had some exclusive quotes. Norma should've have been the ABC's economics writer not me.

When drifting around lower George Street and the Rocks, stand on the corner of George and Essex streets and imagine having a drink with the people mentioned in this inescapably incomplete honour roll of the days of the Newcastle Hotel. Then go for a coffee or drink at the Establishment opposite, where some of the original cast iron columns of the old Bulletin building are still preserved in the atrium bar. I took my French friend Xavier Hennekinne there one afternoon and we had a beer and touched the columns which Henry Lawson and hundreds of other writers from the first half of the twentieth century, and then from the new Bulletin in the 1960s and 1970s, would have brushed or touched when they came in to drop off their copy or pick up their freelancer's cheque or cash for the last week's contributions.

[3] The Bulletin's first literary editor, Alfred Stephens, was the main inspiration for the 'Bulletin school of journalism'. In the early days among the better-known contributors were the writers Henry Lawson, Banjo Paterson, Bernard O'Dowd, and Vance and Nettie Palmer, the cartoonists Livingston Hopkins ('Hop'), David Low, Phil May, DH Souter, Norman 'Heth' Hetherington, and the illustrator and novelist Norman Lindsay