[media]Standing at the entrance to Darling Harbour, Goat Island is a sandstone formation 40 metres in height and covers an area of 5.4 hectares. Perhaps because of its exquisite, far-reaching views and its commanding position in the centre of the harbour, Aboriginal people referred to it as 'Me-mel' meaning 'eye'. [1] 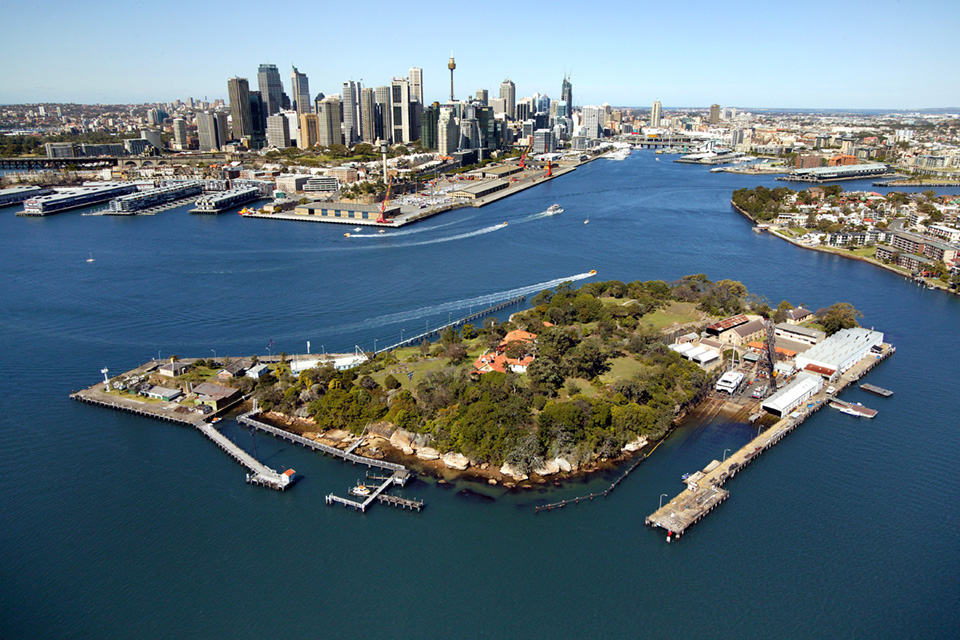 The first European reference to Goat Island appeared in David Collins's An Account of the Colony in New South Wales, published in 1798. In 1794 he noted,

November. Since our establishment in this harbour but few accidents had happened to boats. On the 1st of this month, however, the longboat of the Surprise … was overset on her passage from the cove to Parramatta, in a squall of wind she met with off Goat Island, with a number of convicts and stores on board. Fortunately no other loss followed than that occasioned by the drowning of one very fine female goat, the property of Baker the superintendent. [2]

In 1809 the early colonial artist George Evans[media] painted a watercolour of Goat Island and depicted it as a low, tree-covered atoll. [3] Many proposals were put forward to make use of the island and in 1833 Goat Island was chosen as a safe and suitable place to house the colony's large stocks of gunpowder, required for public works. Convicts from the hulk Phoenix began to quarry the sandstone of the island to clear a place for the magazine buildings. [media]Many of the trees and much of the native vegetation depicted in Evans's picture were cleared to avoid a potential fire hazard. Initial progress was slow as the prisoners, who were mostly men who had re-offended in New South Wales, were working in irons. 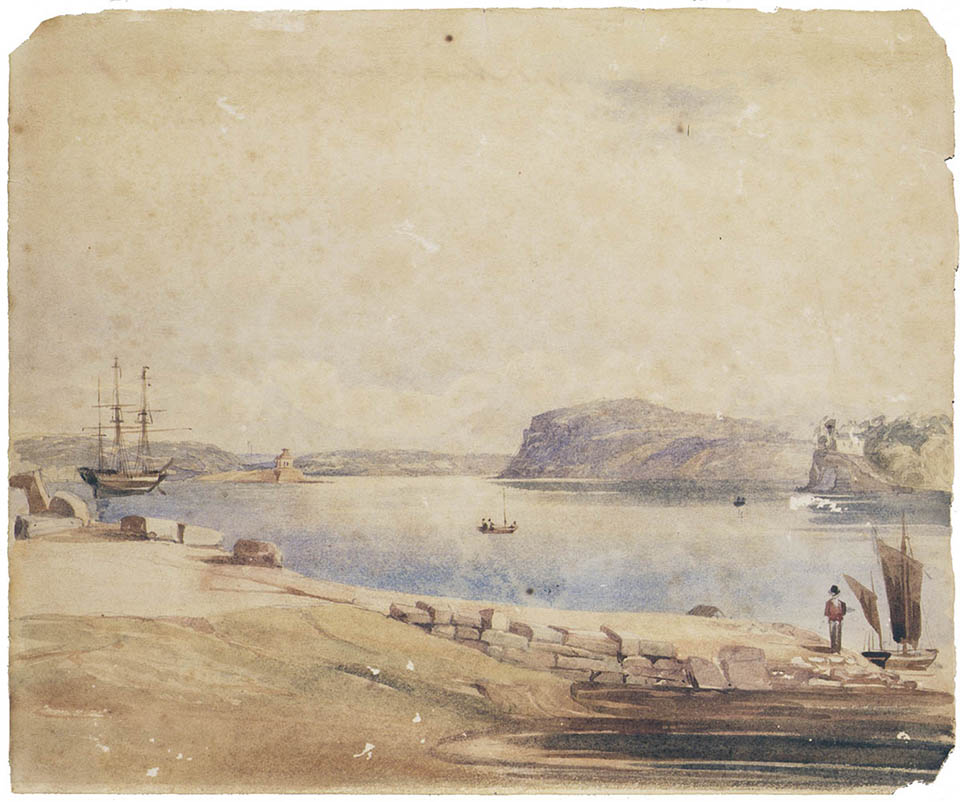 By 1837 the powder magazine had been built, together with a wharf and cooperage. As it was the year that Queen Victoria ascended the throne, the magazine was known as the Queen's Magazine. The following year the officers' barracks and kitchen had also been constructed, together with a sentry box, a stone wall around the magazine and a blacksmith's shop. These remarkable and rare early stone buildings remain on the island today and bear witness to convict period structures and features. In 1839 the prisoners were moved to Cockatoo Island where they erected an Imperial convict establishment and grain storage silos. [4] [media]In the 1850s, further gunpowder magazines were built on Goat Island and by 1861 there were more than 7,000 barrels of gunpowder stored there. [5] 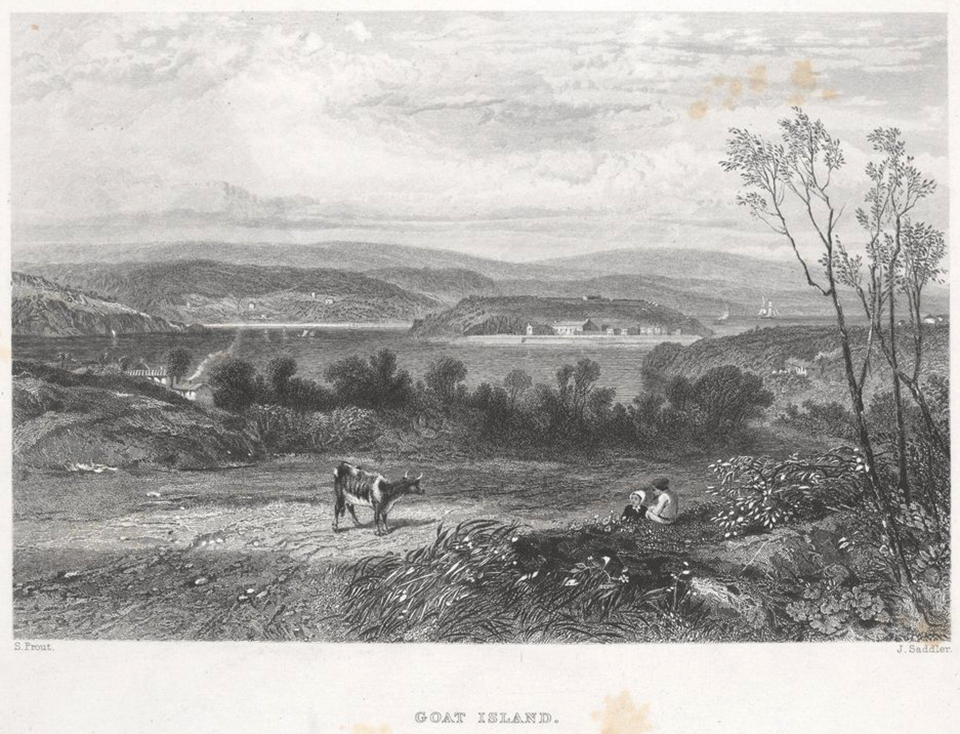 In January 1900 the bubonic plague came to Sydney. It was caused by a bacillus in the blood of diseased rats being transmitted by fleas to humans. By August 1900, 103 people had died and the whole Darling Harbour and Rocks precincts were quarantined. There was general agreement that Sydney's waterfront was unhygienic and had allowed diseased rats to proliferate. Thousands of rats were subsequently killed and many of the shabby and unlicensed buildings and walkways of the harbour foreshore were pulled down. The plague and the need for an unpolluted harbour was the main impetus for the creation of the Sydney Harbour Trust in 1901. It was formed to exercise greater control over the rules and regulations governing the sanitation and the general workings of the harbour and Goat Island became its headquarters. The Trust was in charge of dredging the harbour and all its tugs, barges and dredges were moved to the island. Later firefighting tugs also used the island as a depot. The Trust kept two scavenging boats constantly employed in the harbour and all 'objectionable flotsam and putrefying matter' was taken to Goat Island to be burnt. [6] In 1904 the scavenger boats retrieved an astonishing assortment of debris from the water including 2,189 dogs, 1,652 fowls, 1,033 cats, 29 pigs, 9 goats and 1 monkey. [7]

In 1936 the Trust was replaced by the Maritime Services Board. By the 1940s, Goat Island was home to many members of the Board's Fire Brigade and their families. A large recreational hall was built for the residents in 1941 and soon the Goat Island Social Club had become a popular Saturday night venue, both for the residents and for people from the 'mainland', with ferries leaving Circular Quay on the half hour. In the 1950s and 1960s Goat Island experienced a major period of development and construction and served as a busy shipbuilding and repair yard until the decline of the maritime industry in the 1970s and 1980s.

A Maritime Services Board museum of Goat Island memorabilia and paraphernalia was established on the island in 1981. It was appropriately and historically housed within the Officers' Barracks building constructed by convicts in 1838. [8] Between 1995 and 2001 Goat Island was the set and location for the popular Australian television drama Water Rats. Today the shipyard is still a working yard, specialising in repairs and refits.