Jannali, in the Shire of Sutherland, is a predominantly residential suburb with a small shopping centre. The township, on a ridge, is divided by the Illawarra railway line, with the town centre on the eastern side. The earliest inhabitants of the Jannali area were the Dharawal people. The area is located on Hawkesbury sandstone and accordingly the soil varies in quality. It is bordered on the west by Jannali Reserve, an urban bushland park which runs down steep slopes to the Woronora River.

Samuel Gray purchased several lots of land in 1878 along what would become part of a proposed railway line. These lots had been rejected some years earlier by Thomas Holt, the nineteenth-century pioneer of the Sutherland Shire. Part of the land on which Jannali is situated was originally two lots of 49 acres (19.8 hectares) each. Gray sold the land to the Intercolonial Investment Land and Building Company when it was formed in 1885. [1]

In his time as a member of the Legislative Assembly for Illawarra (1874–80), Samuel Gray was one of a number of people who advocated the building of the Illawarra railway line. The line between Como and Sutherland was started in late 1883 and officially opened on 26 December 1885. This included the establishment of two signal boxes named Jannali and Jubilee, and the construction of a deep cutting, commonly called Jubilee cutting.

While it is not certain why the name Jannali was used to identify the signal box, it was to be of great importance in the development of the area's identity.

The [media]first estate created by the Intercolonial Company, in 1887, was known as the Queen's Jubilee Township Como, on the western side of the railway line. The streets were all named after daughters of Queen Victoria to mark her jubilee. A temporary platform was erected by the company near to the present-day station to encourage potential buyers. 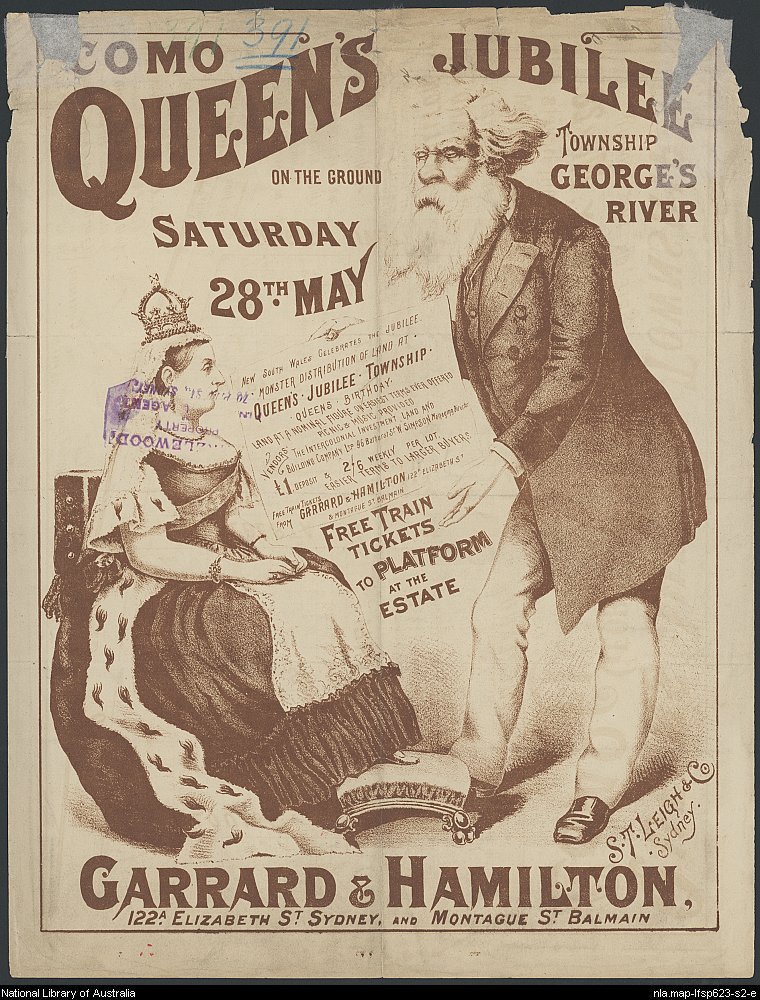 Later [media]releases by the company on the eastern side of the railway line were identified as the Woronora Estate Sutherland, Como. This was probably due to its closeness to these places, which were thought to better known. Despite these releases there was little settlement in the area. 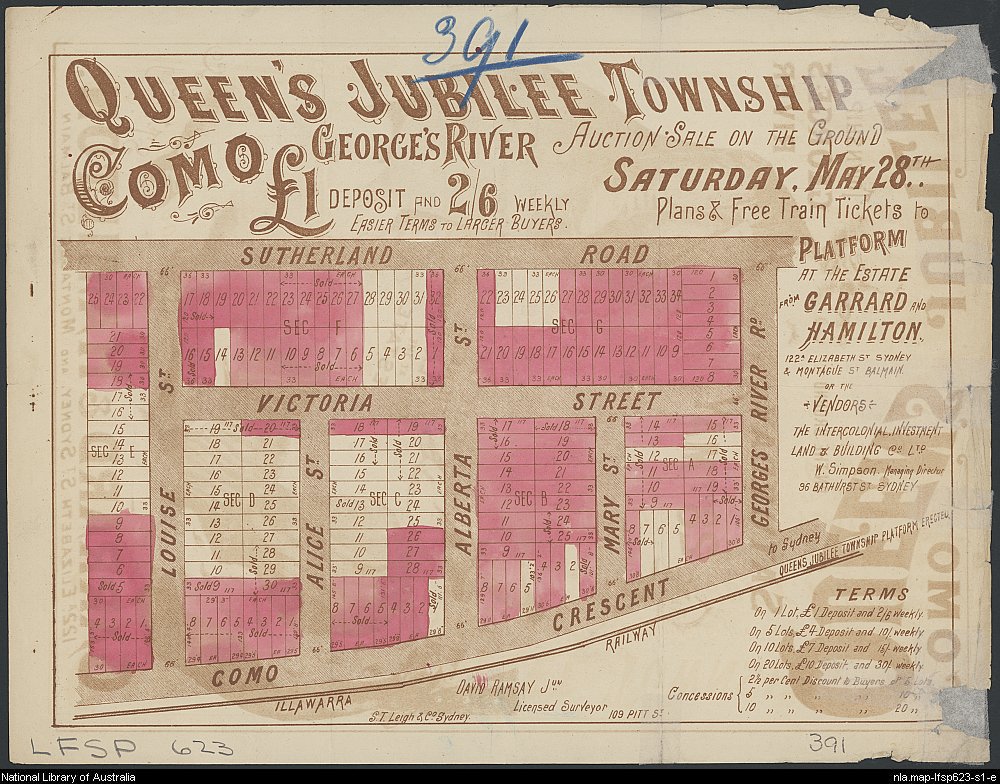 Jubilee, Jannali or 'no man's land'?

From the 1910s, families moved to blocks of land on both sides of the railway line, with the first store opened in the early 1920s. In 1921, there was a move to establish a railway station between Como and Sutherland. [2] Residents approached the council to put to the railway commissioner their case for a platform between the Jannali and Jubilee signal boxes. [3] One of the prime objectives of the Jubilee-Jannali Progress Association, formed in 1924, was to lobby for a railway station for the township.

In 1925 the railway commissioner proposed to build a platform near the Jannali signal box and to name the station Jannali. However, before making a final selection it was decided to include Sutherland Shire Council in the decision-making process. The council suggested the station be named either Jubilee or Flinders. [4] Despite these early discussions, lobbying by residents was required for many years to ensure the project went ahead, as funding was a major stumbling block.

In 1926 the progress association proposed that, as well as the platform, a bridge should be constructed over the line at the southern end of the Jubilee cutting, closest to Sutherland station. That same year, the railway commissioner informed the council that the station would be named Jannali. A newspaper report of the time stated that the word jannali was an Aboriginal name for the moon. [5]

The area was referred to as a 'no man's land', despite some settlement having taken place in the early 1920s. However, it was the lack of transport that retarded growth. This was confirmed when the commissioner asked the council how many lots from subdivisions on offer had been sold. It appears the total was less than half.

In 1927 the main road through the township on the western side of the railway line was renamed Jannali Avenue. In May the progress association decided to delete Jubilee from the title of the group. [6] And in November 1927 the village of Jannali was officially declared.

In these early days, the shopping area was on the western side of the railway line. The closest bridge across the line for the residents of Jannali was at Sutherland, and part of the argument for building a new bridge was the great distance which had to be travelled to deliver goods from Sutherland. One of the business owners at Sutherland stated he had to go to Como and then all the way back to Sutherland to deliver to the other side of the railway line.

In February 1931 the railway station and traffic bridge were officially opened.

Jannali's population increased when the Depression took hold in Sydney in the 1930s. Many families forced from their city homes took up land in the subdivisions opened up in the Jannali area. Some blocks of land could be purchased for no deposit and a small payment per week. [7] However, many residents found it difficult to make ends meet. One contemporary described Jannali people as real 'battlers'. [8]

These [media]were the words used to describe the area in a newspaper report 10 years after the opening of the railway line. It was reported that Jannali was well on its way to becoming a modern suburb. Clive James, who lived in Jannali briefly as a boy, felt that although it 'was not quite the bush proper', it was 'certainly an outer suburb'. [9] A proposal for a high school had been put forward in the 1930s, but it was a primary school that opened first, in 1944. 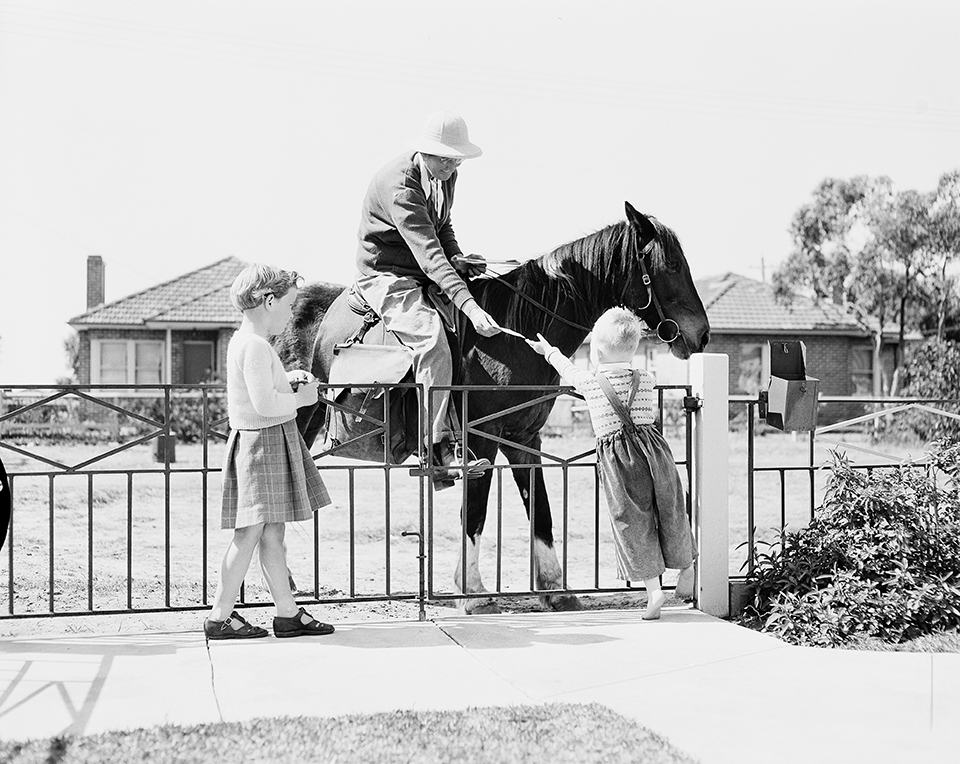 The bushland setting appealed to Henry Grace (1884–1966), better known as the eccentric 'Birdman'. Grace, who could imitate more than 60 birdcalls with precision, moved from Hurstville to Jannali in 1946. Here he could be closer to the Royal National Park to collect and perfect his imitations of native birds.

The Department of Public Housing was looking for home sites at the end of World War II and any open space in Sydney was targeted. One thousand homes were built in Jannali. A small group of ex-servicemen seeking inexpensive building blocks selected land released in Jannali during 1953–54. They provided their own road access, with some assistance from the council.

The 1950s saw the opening of Jannali Girls (1953) and Jannali Boys (1959) high schools. Since movement in and out of the area was restricted, with people required to go into Sutherland and then backtrack about a kilometre, it was decided in 1957 to build an access road between Sylvania and Jannali.

In the late 1950s Jannali's commercial centre was rapidly expanding and with the convenience of train transport it was noted that the area was now a desirable area for home unit development. In 1960 approval was granted for a two-storey residential block of eight units.

The road between Sylvania and Jannali was not opened until 1962. At this time the population of Jannali was 15,000. Jannali was released from the geographical pocket that had limited its growth. The shopping area grew to accommodate several shops and an arcade, which housed a new post office. [10] In 1969 building growth in Jannali was the second highest in the Sutherland Shire. [11]

Sutherland was the interchange for trains to Cronulla and Waterfall. However, Jannali became an overflow for commuters who could catch through-trains from the city. In the 1970s, with the trend toward medium-density housing, streets around railway stations became targets for high rise. Jannali was no exception. In the early 1990s, attention was focused on reinventing the shopping and commercial centre to promote a village identity, as the emphasis on urban consolidation continued to grow.

Jannali has continued to serve its residents, who prefer the convenience of commuter transport and a relatively cheap place to live.