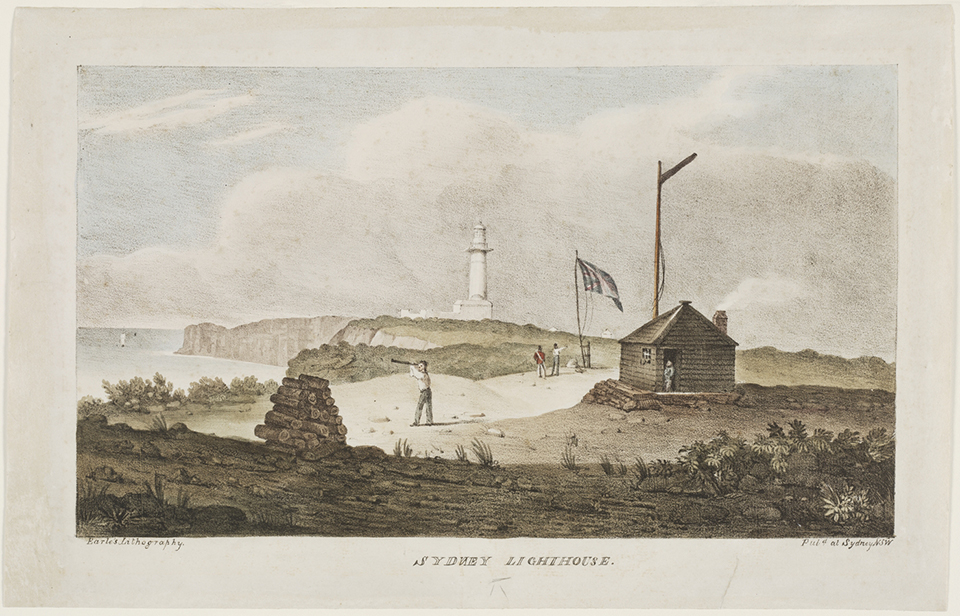 from persons willing to undertake the Mason's work required in erecting a new Signal House at South Head.

For the colony's first 50 years the signal station had been a basic lookout hut, a flagpole and a signal staff for semaphore flag signals. The new building was designed by Colonial Architect Mortimer Lewis, who had bought and developed property to lease at nearby Watsons Bay in 1837. In 1839 he sold it to the Colonial Treasurer Pieter Laurentz Campbell.

[media]The new signal house was a stone building, making up the two lower floors of the tower that survives today, and is shown in the advertisement for the subdivision of Campbell's land in 1841, with a semaphore pole immediately north and a flagstaff to the north of that. The two-level building was cut three metres into the rock, from which it rose in an octagonal form to an observation level. To complete the renovation project, another tender in January 1841 was invited 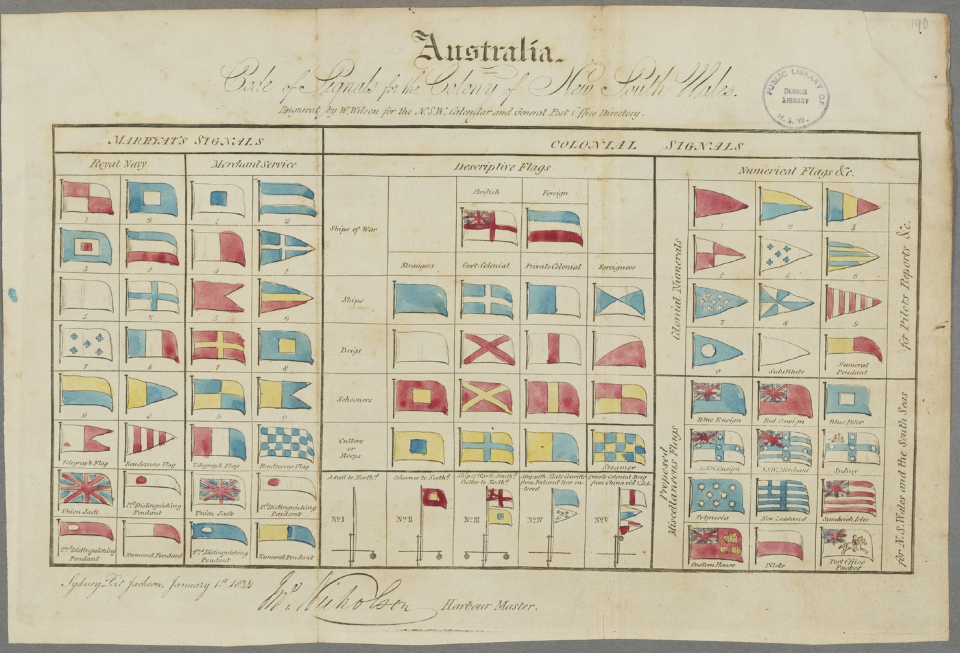 from persons willing to undertake the erection of a Flag Staff, together with certain repairs to the Semaphore, at South Head.

A newspaper report in April that year noted that the repairs had interrupted the visibility of the flags. The timber hut from the old lookout was replaced by new staff quarters, built in the 1850s and still occupied in 2008.

Visibility was not always possible. On 20 August 1857 the Dunbar was wrecked on the rocks immediately below the signal station with the loss of all but one of her 121 passengers and crew. The system of semaphore flags giving details of arriving ships, was replaced in January 1858, using the first electric telegraph line in New South Wales, which connected the signal station with the city.

In 1890 the [media]building was raised to its final height of four levels, topped with a signal lamp room. The fourth floor provided the signal station staff with outlooks on all sides. A door led to an outside balcony with a balustrade around the building. The floor, set 85 metres above sea level, has visibility for up to 18 nautical miles out to sea, as well as back down the harbour. There is access from this fourth floor observation room to the roof space from which a large signal lamp could be used to communicate with vessels out at sea. 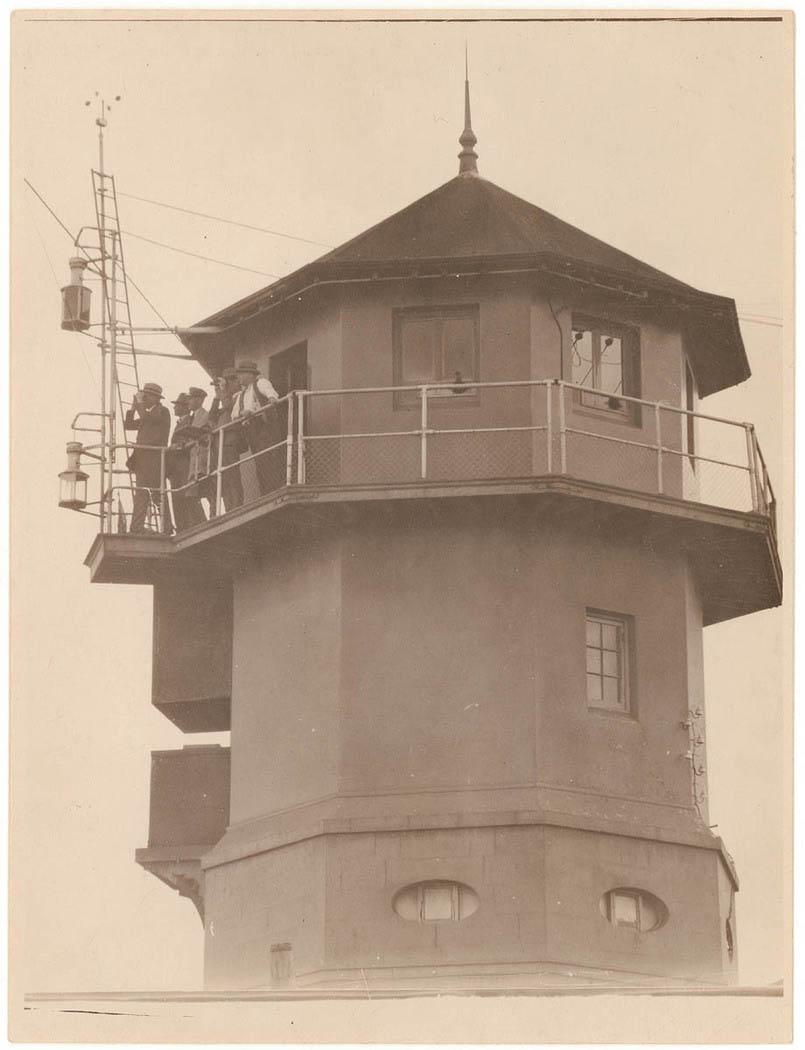 The Sands Directory for 1892 recorded four staff resident at the signal station (only one less than at the nearby Macquarie Lighthouse): a signal master, an assistant signal master, a telegraph operator and a messenger.

The primary role of the signal station remained to observe arrivals of ships, report them to the city of Sydney, and record shipping movements. The register began in November 1797: by 1998 it was recording 2800 shipping movements for the year. A second function was to advise pilots of the arrival of vessels, so they could go out to meet them – for much of the nineteenth century the flag announcing a ship was the signal for freelance pilots to race and compete to provide pilotage services.

In World War II the site was part of the military defences, monitoring all vessels approaching Sydney harbour. Submarines were a different matter and when Japanese midget submarines entered Sydney harbour during the night of 31 May 1942 messages were sent to the signal station, not from it, in the panic that followed the explosion at Garden Island.

Different agencies of the New South Wales government have been responsible for the signal station. From 1936 the responsible body was the Maritime Services Board. Ship-based radio communications reduced the importance of visual observation, but the signal station remained to supplement and confirm these, and it was especially important for smaller vessels. The Maritime Services Board finally ceased to operate the station on 23 March 1992, relying on their main operation centre at Millers Point, together with closed circuit cameras for visual observation.

Since that date, the building has remained in permanent use by volunteers, initially from the Royal Volunteer Coastal Patrol and the Australian Volunteer Coast Guard Association, and in 2008 just from the latter. They staff radios and maintain visual contact every day, typically for 120 hours a week, for the benefit of small and recreational boats, playing an essential lifesaving role. The New South Wales government in 2007 committed $130,000 to the restoration of the building's fabric.

The lookout, flagstaff, semaphore and signal station at the same location on Outer South Head have thus been in operation for 208 years, almost 170 of these from the same building, as an essential link between land and sea. This continuity of past and present marks the site as one of the most important places in Australia's heritage.

'The Bicentenary of the Signal Station at South Head', no 14, Woollahra Heritage Briefs 1–30, Woollahra History and Heritage Society, 1993