The current St Stephen's was dedicated on 23 March 1935, 12 months after the foundation stone had been laid on the site on 23 March 1934. [1] The rapid progress of the building program was the result of pressure to demolish the previous St Stephen's church in Phillip Street, which was in the way of the extension of Martin Place, then nearing its completion.

The new church was built in an interwar Gothic style, one of only three in the city, the other two being the Scots Kirk and the Central Baptist Church. It represented the final home for Sydney's Presbyterian congregation after 100 years of internal turmoil and regular relocation around the city.

The Presbyterian Church had started in Australia with the arrival of Reverend John Dunmore Lang in 1824. Lang founded the original Scots Kirk on Church Hill in 1824 and presided over his congregation from there. A fiery and at times controversial figure, Lang challenged both colonial governments and the Synod of Australia, eventually leading his congregation away from the Synod, to form the Synod of New South Wales, in 1842. Those that stayed with the Scottish Church went by the name of the Synod of Eastern Australia. [2]

In the same year, some of Lang's congregation split away from him to form their own congregation, free of the increasing tensions between Lang, the civil authorities and the church in Scotland. This new congregation eventually found a home in Macquarie Street, in the south wing of the old hospital, establishing themselves as the first Wesleyan Church in Australia.

In 1845 this congregation was again split, when the home church in Scotland urged overseas churches to decide between following the preaching of the Established Church or the Free Church. Despite their minister, Reverend Thomas Mowbray, taking a neutral stand, some of his followers left to establish the Free Presbyterian Church in a former Congregational Church building in Pitt Street. The Pitt Street congregation eventually relocated to a new site in Macquarie Street, importing a prefabricated iron church for the site. As a result, there were four separate groups of Presbyterians in New South Wales by the 1850s, some on the wane but others increasing.

By 1865 there was an increasing call for unification of the various churches, which resulted in the formation of the Presbyterian Church of New South Wales, combining the Free Church Synod of Eastern Australia, the Synod of New South Wales and the United Presbyterian Church. [3] Their respective churches were also named – the Iron Church in Macquarie Street became St Stephen's.

By 1872 the Iron Church was too small for the growing congregation, and the church was merged with the Phillip Street congregation, also called St Stephen's. It was this church that held the congregation until its demolition for the creation of Martin Place.

The [media]new St Stephen's church was built on the site of Burdekin House, demolished to make way for the church. Burdekin House, built in 1842, had been described as the finest private residence in Sydney, and its demolition became an early rallying point for the conservation movement in Sydney. [4] 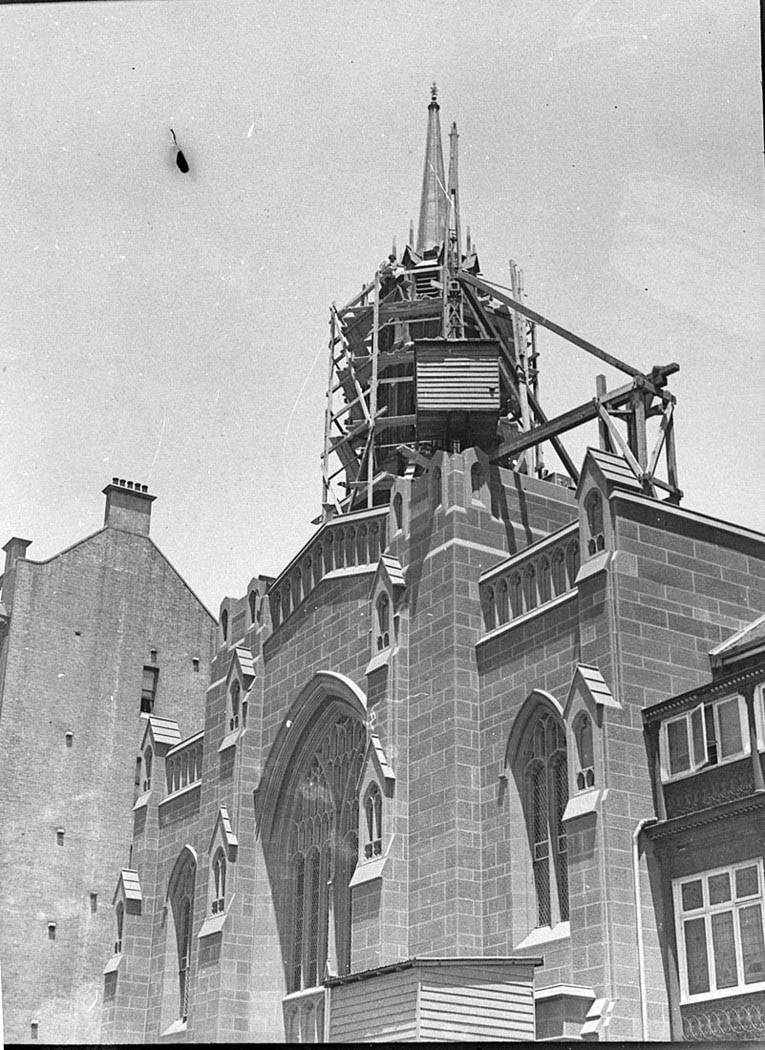 The new church, once opened, was quickly embraced by the congregation as the home of the Presbyterian Church in the city. In 1956 the first televised church service in Australia was broadcast from St Stephen's, introducing the service to a broader audience.

In 1977 St Stephen's joined the union of the Congregational, Methodist and Presbyterians churches in Australia to form the Uniting Church in Australia. [5]