[media]Cockatoos live long lives, sometimes up to 80 years. But in New South Wales, there was one bird, Cocky Bennett, who lived for well over a century and whose life spanned the eighteenth, nineteenth and part of the twentieth centuries. He was loved by many and was famous for his amusing patter. 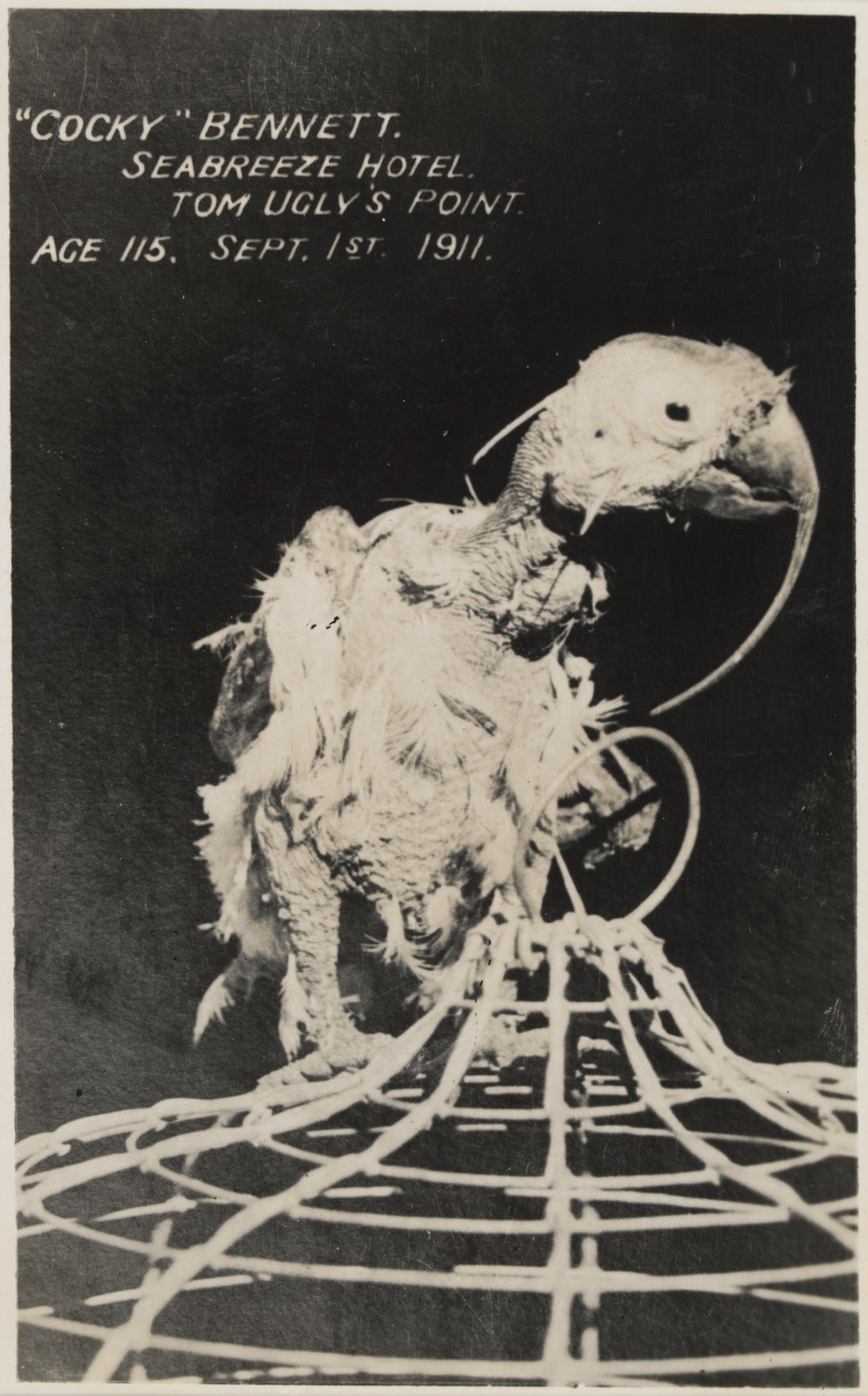 Cocky spent his first 78 years travelling the world with Captain Ellis, his owner, who plied his ship in the South Sea Islands' trade. The parrot's confinement, and the Captain's loneliness, could account for the bird's talkativeness and his contact with other members of the crew, less literate than his owner, probably coarsened his vocabulary. He was an apt learner and a natural chatterbox.

Captain Ellis died in the Solomon Islands aged 87 having travelled around the world with Cocky many times. Following his death, Ellis's nephew took temporary charge of Cocky although he had been bequeathed to Joseph and Sarah Bowden, who were then probably the licensees of Bowden's Clubhouse near the corner of Hunter and Castlereagh streets, Sydney.

By the time the Bowdens took delivery of their bequest they had moved to Melbourne. With Joseph's death in 1889, his wife Sarah married Charles Bennett and the couple moved to Tom Ugly's Point in Blakehurst where Charles became the licensee of the Sea Breeze Hotel.

Before motor traffic and modern bridges changed the scene, the Sea Breeze Hotel enjoyed great popularity as it was a convenient place to wait for the steam punt across the Georges River at Tom Ugly's Point and it had an excellent reputation for its cuisine, especially the seafood. When Charles died in September 1898, Sarah continued as licensee until she retired in 1915.

Cock of the Bar

Cocky lived in the hotel and for many years he ruled as 'Cock of the Bar'. He was extremely talkative and popular and known to many thousands of residents and visitors far and wide who became acquainted with his colourful character. Cocky had a cage on the hotel's front verandah where he could watch the passing parade, greeting old friends in his raucous and inimitable style. Attached to the cage was a collection box to raise funds for St George Hospital and so generous was the response that three beds were endowed to the hospital. Each bed bears a plaque acknowledging the feathered collector.

Cockatoos are the loudest of all types of parrots and Cocky was no exception. His repertoire included phrases appropriate to a public house like 'one at a time, gentlemen, please', when he was harassed by other birds. Hotel patrons soon learned that Cocky's talkative nature could be made even more uproarious by administering a 'sip of strong brew'. Then Cocky was at his squawking best and his language more lurid than ever. An oft-repeated saying was quoted by his amused admirers was 'If I had another b…y feather I'd fly!' The older he became, the more pronounced was his loss of feathers, so that this remark always greatly amused those listening nearby.

As the years passed, Cocky started to lose his feathers, looking more like a plucked chicken with wrinkled skin. Moreover, his upper mandible had an extraordinary long tip, so that he could only eat mashed food. Such abnormalities are typical of the psittacine beak and feather disease, caused by a circovirid virus, which also lowers the animal's immunity against the effects of other viruses and bacteria. By the end of his long life the parrot's appearance was utterly freakish. His flesh, almost devoid of feathers, was leathery grey; his claws and beak were gnarled and very long; his body was thin and scrawny – but his bright beady eyes and his rasping voice never failed him. From time to time his beak was pared and Sarah Bennett kept the pieces as proof of his extraordinary age. The beak, like the trunk of a tree, is a good recorder of age but these pieces were either lost or stolen.

Although the exact date of Cocky's birth was not known, it was set down, probably by Sarah to satisfy her customers, as the first of September. Each year on this date piles of birthday cards would be sent by the bird's many admirers.

When Sarah Bennett left the Sea Breeze Hotel in 1915 she presented the bird to her nephew, Murdock Alexander Wagschall, then licensee of the Woolpack Hotel, George Street, Canterbury, where Cocky was installed in the bar. There he made many new friends, continuing to demonstrate his ability to talk and swear. His antics and his quaint remarks never failed to delight his audience. Sometimes when a silence fell, Cocky would imitate the voice of someone he knew and nearly create a fight among the men if the poor innocent fellow happened to be present and was blamed for his offensive words!

When Cocky died in 1916, at the grand old age of 119 years, his passing caused much lamentation. The Sydney Morning Herald printed his obituary on Saturday 27th May 1916 in which they called him 'a venerable cockatoo'. The paper informed its readers that he:

'died on Friday in his 120th year…The old bird was absolutely featherless for the last 20 years, but it maintained its “patter” till the day before its death.' [1]

Mr Wagschall announced his intention to have the famous old bird stuffed and mounted by Tost and Rohu, then well-known taxidermists.

Mrs E Pugh of Stanwell, granddaughter of Mr Wagschall, was the last to own this historical relic and it was she who presented Cocky to the Kogarah Historical Society for perpetual guardianship. Now slightly tinted after restoration, the bird surveys the world in silence – something he never did in life. There have been other claimants to his title but these are not genuine as the Kogarah Historical Society has complete evidence to confirm the authenticity of its exhibition.