[media]Agar Steps is located on the western side of Observatory Hill and connect Kent Street and Upper Fort Street. They were designed as a continuation of Agar Street, (now High Street) which was named after Thomas Agars, a merchant and City councillor.  Initially known as Flagstaff Steps, Agar Steps were originally planned to provide access to the Model School and Sydney Observatory. 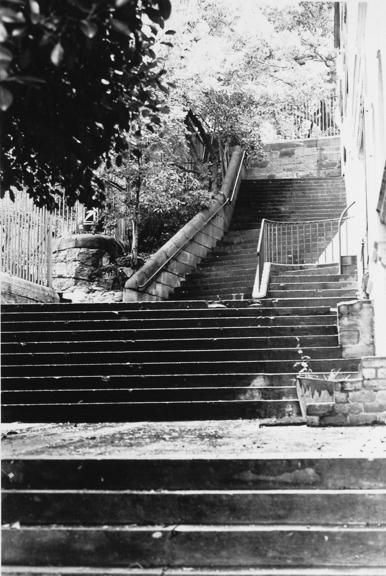 An access way in the location of Agar Steps first appears as an intention on a plan from 1833, where a ‘proposed approach to Flagstaff’ and ‘R.S.B footway here from Kent Street’ is noted [1] however the Trigonometrical Survey of 1855-65 shows no stairway or path.[2] Despite this, an informal pathway may have existed.[3]

Agar Steps has been redesigned and rebuilt several times. The first version of Agar Steps is shown on drawings signed by the City Engineer, Edward Bell, in 1869.[4] The drawings show a stairway similar in its aesthetic characteristics to other stairway designs bearing Bell’s signature such as Merriman Stairs in 1858, Sutton Stairs in 1866, Caraher Stairs in 1867, Moore Steps in 1868 and Butler Stairs in 1869.

All these stairways were designed with sandstone balustrades topped with half-rounded coping stones. Their entries were framed by sandstone piers that often supported a wrought iron semi-circular lamp frame carrying a single central lamp. Cast iron bollards were frequently located at the entrances and landings and handrails were installed on both sides of the stairway.

Stairways such as Agar Steps were part of the Sydney City Council’s Victorian infrastructure boom. The sophisticated level to which these stairways are detailed shows a level of civic pride and financial investment in pedestrian infrastructure that had not been undertaken previously in the city. By the end of the Victorian era the public stairway in Sydney had become an important element of the circulation system that contributed to defining the future pedestrian network of the city.

The design signed by Bell for Agar Steps,[5] was a flight eight feet (2.4 metres) wide, rising straight up from Kent Street until they reached the wall of the Model School where the footway then turned north, at a right angle, to run in a graded ramp towards the summit.[6] It is likely that the arched iron lamp frames, designed for either end of the stairway and for the point of its change in direction, were not constructed as part of the original works because the council was petitioned to provide a gas lamp for the ‘street’ in 1876.[7]

Bell’s drawing from 1869 shows solid blocks of stone forming the steps with low risers and comparatively deep treads. The resulting proportion of the stairway, when combined with the detailed piers, bollards, gas lamps and lamp frames, create the image of a grand Victorian stairway whose architectural character is somewhat ceremonial. This rather grand design may never have been fully realised and the detailed stone and metalwork do not appear to the same degree in later versions of the stairway.

In 1885 the original stairway was modified under drawings signed by Adrien Mountain, then the City Surveyor.[8] In this new design, the stairway was widened and a new branch up to the Observatory was proposed. The ramp that had run from the wall of the Model School to the summit of the hill in the previous version of the stairway, appears to have been demolished at this time although some stair treads were retained that turned the corner at the wall of the school.[9]

In July 1891 the city surveyor was asked to report on the costs of erecting ‘bluestone steps’ on Agar Street East opposite the premises at number seven. The reasons for a new stairway so soon after the last are likely to have been twofold. Firstly, the original sandstone steps were possibly not wearing well and secondly, the stairway design signed off by Mountain had not accounted adequately for the entrances to the terrace houses necessitating difficult transitions from the side of the steps.

As a result, a third version of the stairway signed by Richard Richards, the City Surveyor 1887–1901, was subsequently designed and built in 1892. It comprised a main stairway approximately five metres wide rising about three metres in height above Kent Street before it then branched out into two arms, with the first, three metres wide, continuing up to provide access to the front doors of the terrace houses which since 1882 had began to line the south side of the stairway. Access from the stairway to the residences was accommodated by landings which coincided with the front doorways of the houses.[10] The stairway that exists today is largely the design signed off by Richards from 1892.

Agar Steps are well known for the Victorian terraces that front onto them. Carlson Terrace and shop, dating from 1882, ends the run of terraces at the Kent Street junction. The stairs also accommodate a group planting of fig trees more than 125 years old, and a cut through the sandstone bedrock which is the result of early sandstone quarrying in the area.[11]

The views both out from the stairway and looking in towards the stairway are also significant factors in the importance of this stairway. Views out from Agar Steps have been represented by Australian artists such as Vic O’Connor, Kenneth Jack and Cedric Emanuel and captured by many photographers, both professional and amateur.[12] The author Ruth Park notes that the stairs have ‘been much painted and photographed during their long history. Their Italianate character lends a strangely romantic note to the maritime atmosphere of Millers Point and Walsh Bay'.[13]

The steps and trees are listed in the Register of the National Estate, State Heritage Register, City of Sydney Local Environment Plan and Sydney City Heritage Study and are classified by the National Trust of Australia.