[media]Bex Powders were a compound analgesic that comprised aspirin (420mg), phenacetin (420 mg) and caffeine (160mg), also known as APC. It was the first APC product marketed in Australia and the most popular. Bex Powders were produced from the 1920s in South Australia by Beckers Pty Ltd. [1] Beckers moved to Sydney in the 1960s and in 1964 was based at the corner of Campbell and Crown Streets, Sydney. [2] Bex Powders [media]were commonly taken by dissolving the powder in water or a cup of tea. The packaging claimed a Bex would relieve ‘Headache, Neuralgia, Rheumatism, Sciatica, Lumbago...Influenza and Cold in early stages’. [3]

The problem with Bex

[media]The recommended daily dose of caffeine is 250mg per day and yet Bex packaging advised taking at least two powders, containing 320mg of caffeine. It has been recorded that many women took up to 30-40 doses a day, sometimes washed down with Coca-Cola, adding to the caffeine intake and strengthening the addiction. A further complication was that many of these women were also prescribed Valium, another addictive substance. 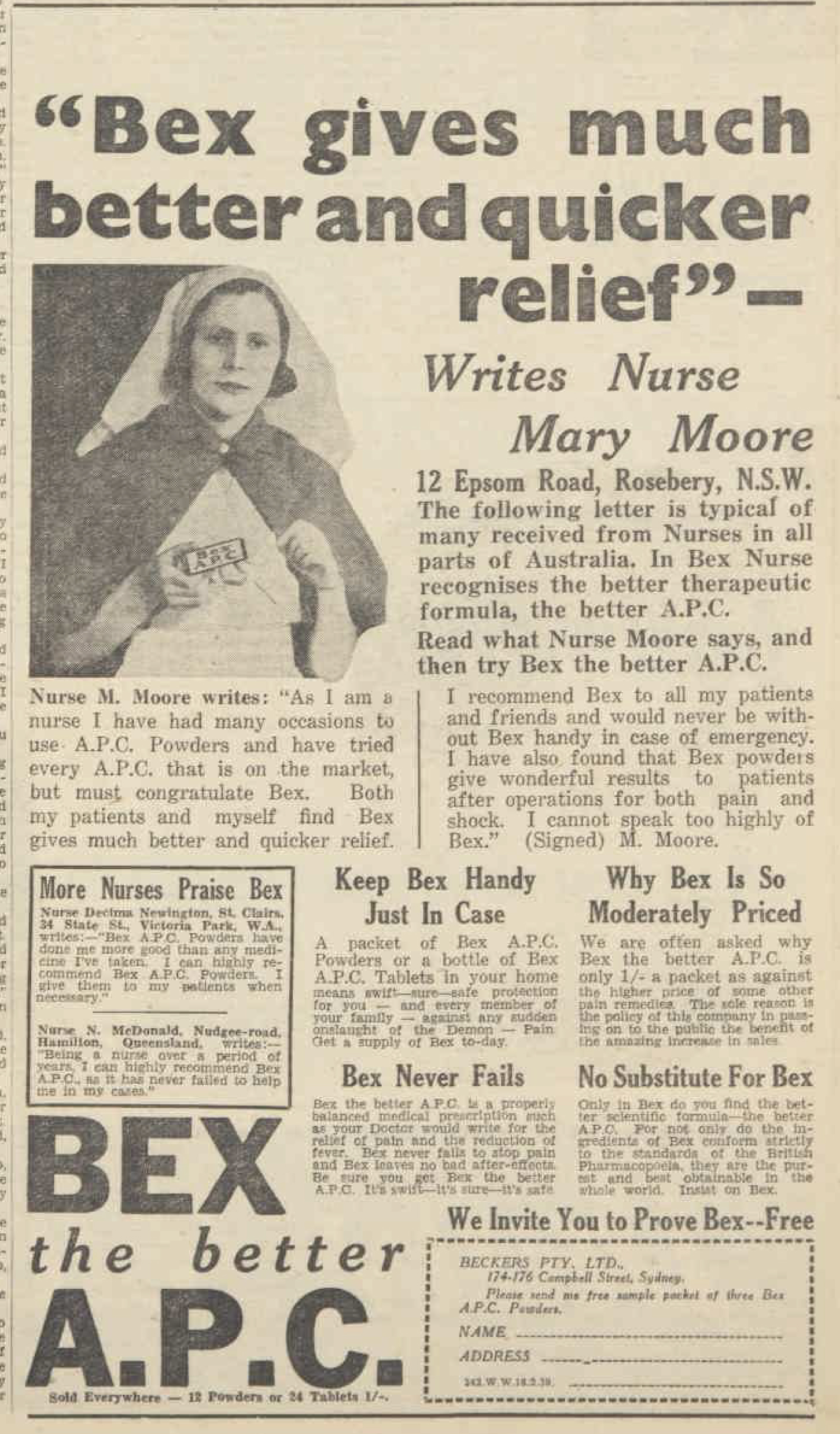 In the 1960s Dr. Priscilla Kincaid-Smith discovered that Bex Powders were addictive and that the large doses of phenacetin consumed by habitual users caused kidney disease.

One woman, Norma O'Hara took Bex Powders sometimes twice a day every day for up to eight years from when she was 20. She used to work at Rosebery Wrigley's factory and said 'most of the girls took Bex… it was to keep you going. Working the machines, you thought you needed them.' [6] O'Hara was subsequently diagnosed with kidney failure which was linked to compound analgesic abuse. It was common practice for factory managers to provide Bex Powders free of charge to their workers.

APC compounds were banned in 1977 and painkillers containing them were removed from the Australian market. Over time, this led to a dramatic decline in kidney disease. [7]

Eileen Hennessey. A Cup of Tea, a Bex and a Good Lie Down. Townsville: Department of History and Politics, James Cook University, 1993.

[5] Brad Norrington, 'Have a Bex and lie down, Kevin Rudd tells those who think he's going to challenge Julia Gillard', The Australian, 23 September 2011, http://www.theaustralian.com.au/national-affairs/therese-rudds-fires-kindled-but-julia-gillard-staying-put/story-fn59niix-1226144691810, viewed 4 November 2013