Sydney has hosted three Her Majesty's theatres, but it is the name that has continuity not the site.

[media]The construction of the first Her Majesty's Theatre was initially proposed for 1882, but work did not start until December 1884. The theatre was built facing Pitt Street on the Market Street corner. Theatrical agent James Allison had purchased a 21-year lease from the site owners, the William McQuade estate, and in 1883 he went into partnership with actor and [media]manager George Rignold with plans to build an opera house. The theatre was near completion when financial difficulties forced out the developers and ownership of the theatre reverted to the McQuades. The Rignold/Allison partnership only lasted until early 1889, but Rignold then continued to lease the theatre until 1895. 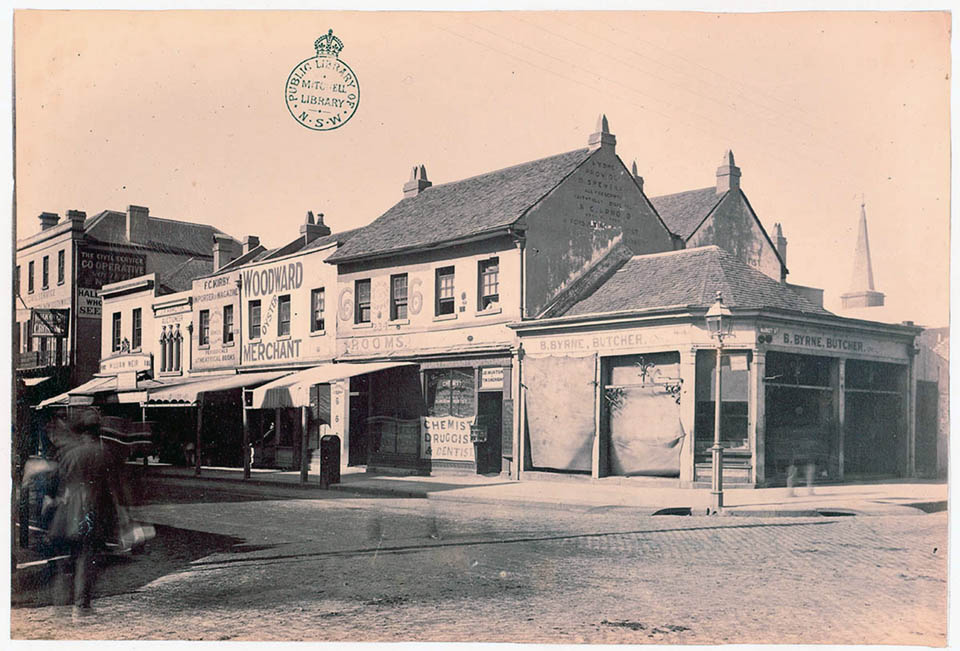 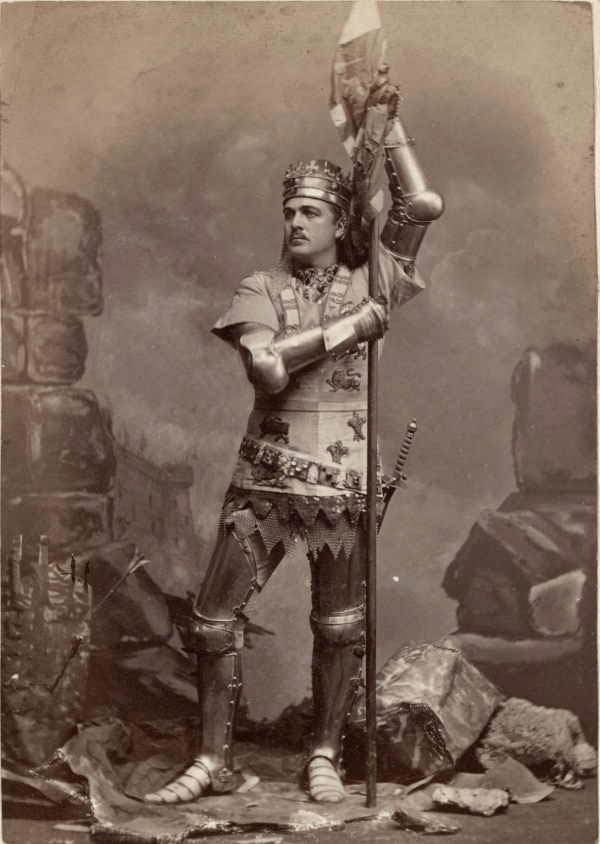 Her Majesty's theatre, [media]designed by architects Morell and Kemp, was in its time the largest and best-equipped venue in the city. When it opened on 10 September 1887, it was also the first theatre that conformed to the regulations arising from the NSW Commission on Theatres. It had extensive fire precautions including a brick firewall and an asbestos drop curtain. 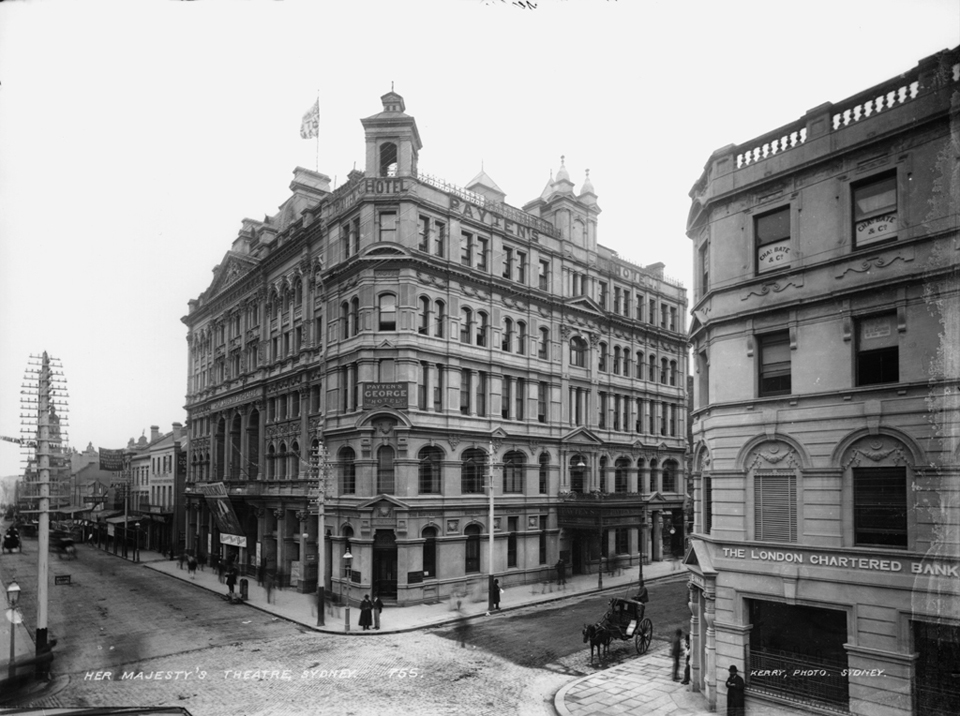 The theatre was in the centre of a seven-storey building, with an exterior facade modelled in baroque style with Corinthian columns, housing a hotel and offices. While most patrons entered through the main foyer, in the fashion of the times, the entrance to the gallery tier was by a narrow, winding staircase from Pitt Street.

Estimates of the audience capacity of Her Majesty's vary, but it was around 1700 people. They were accommodated in an auditorium 74 feet (22.5 metres) square, which had three tiers – dress circle, family circle and gallery – with three stage boxes on each side of the proscenium. The fronts of these tiers and boxes were decorated with gilded bas-reliefs of wreaths of flowers on a primrose background. The walls were covered with tapestry, the seats upholstered in crimson plush and the floors of the dress and family circles were carpeted.

Above the auditorium the central dome of the roof featured a gas chandelier with, beneath it, a series of gilt rods with a five-leafed electric lamp at each end. The dome was decorated with bronzed columns, panelled spandrels and gold bas-relief designs, all on a background of turquoise blue.

The proscenium arch was decorated with the symbols of the rose, shamrock and thistle of Great Britain, picked out in gold on a crimson background, with the whole surmounted by the Royal Coat of Arms. The satin tableau curtains reputedly came from Henry Irving's London Lyceum theatre production of 'Romeo and Juliet'.

The stage area, with 18 dressing rooms on three levels above it, was around 90 feet wide by 50 feet deep (27.4 by 15.2 metres). The theatre was equipped with a wagon system, rather than the older fashioned grooves, for set changes. These wagons were basically platforms on wheels with rollers that could be reversed, so providing for both rapid changes on stage and easy resetting in the wings. The lighting and mechanical power for the stage and auditorium was provided by electricity with a backup system of gas, with the boilers and mechanics for both systems housed in the basement of the theatre.

[media]Her Majesty's hosted many spectacular shows. During George Rignold's lease, there were his famous Shakespearean productions, especially Henry V, as well as the popular British military melodramas, such as Youth and In the Ranks in which he again starred. It also hosted Sarah Bernhardt in her 1891 tour, Harry Connor and his American company in A Trip to Chinatown in 1899 and in 1901 the record breaking run of 96 performances of the musical Florodora. A year later a production of Ben Hur featured live horses and chariot racing. 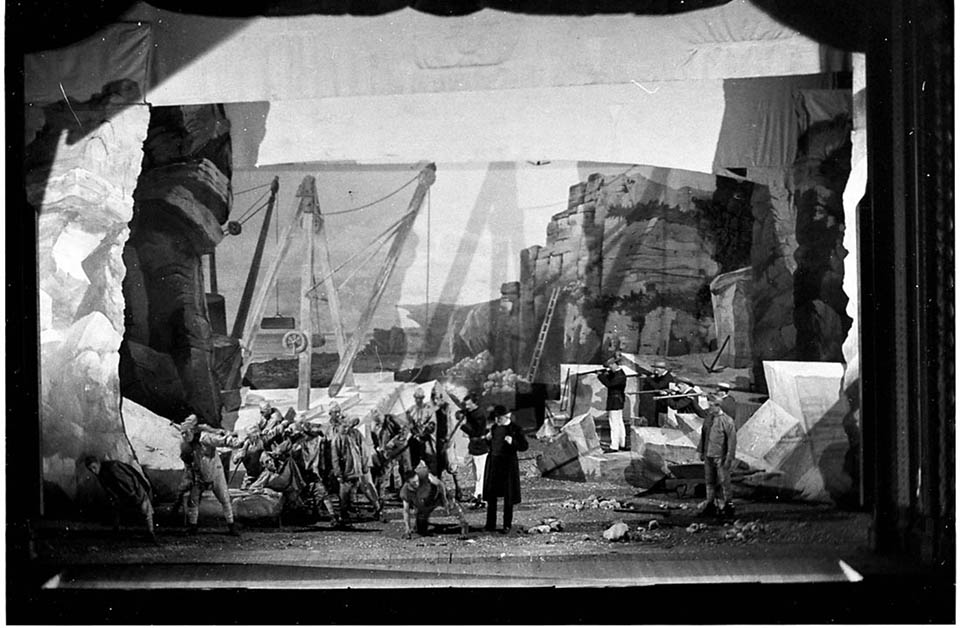 [media]On Sunday 23 March 1902 during this run of Ben Hur, and 15 years after the theatre's completion, a fire broke out. The asbestos safety curtain failed to operate and the interior of Her Majesty's was destroyed. 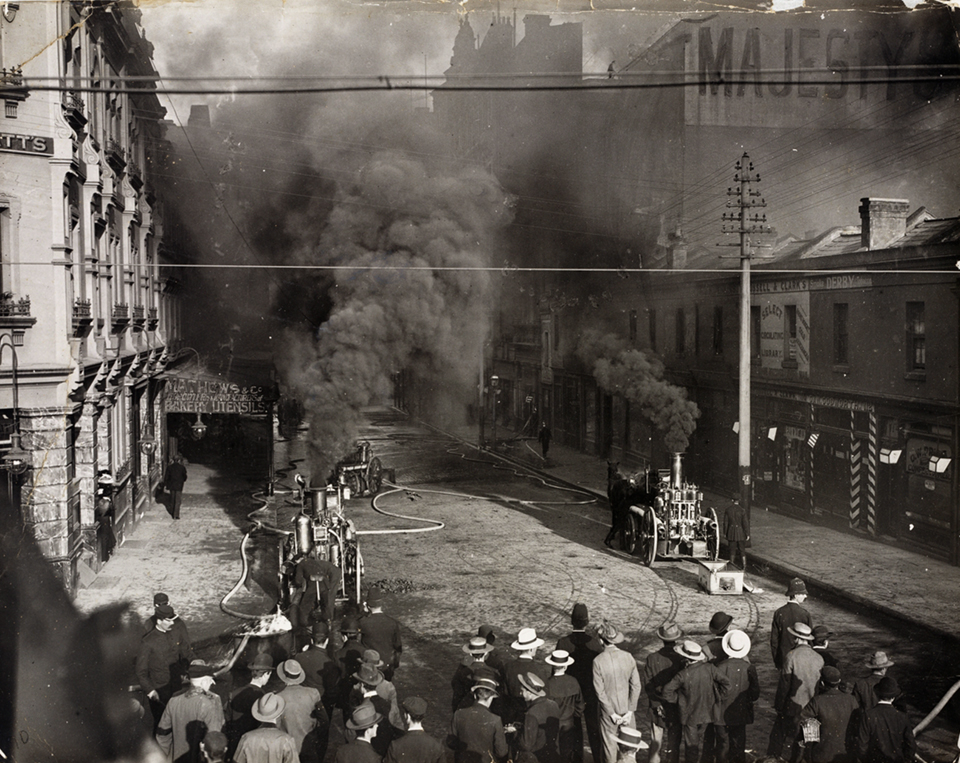 The owner of Her Majesty's theatre, Cecily McQuade, arranged for the leading architect William Pitt junior to design a replacement after the fire, [media]and the theatre re-opened on 1 August 1903. A new four-storey building on the Market Street side of the stage contained offices and dressing rooms, while Pitt retained the same facade for the theatre. An interior was created in the Edwardian style. 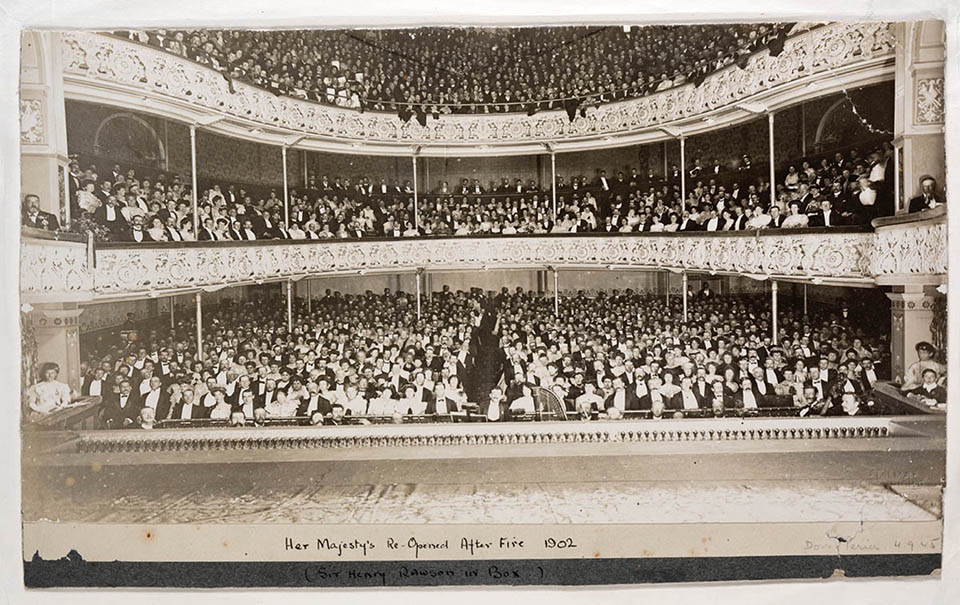 [media]The public spaces were enlarged and extensively redecorated. Patrons entered by a broad central white marble staircase, with steps down to the stalls. The new theatre, which was a floor lower than the old one, had only two tiers, supported by posts above the stalls, instead of the usual three, although this still permitted a capacity of around 2,000 people. 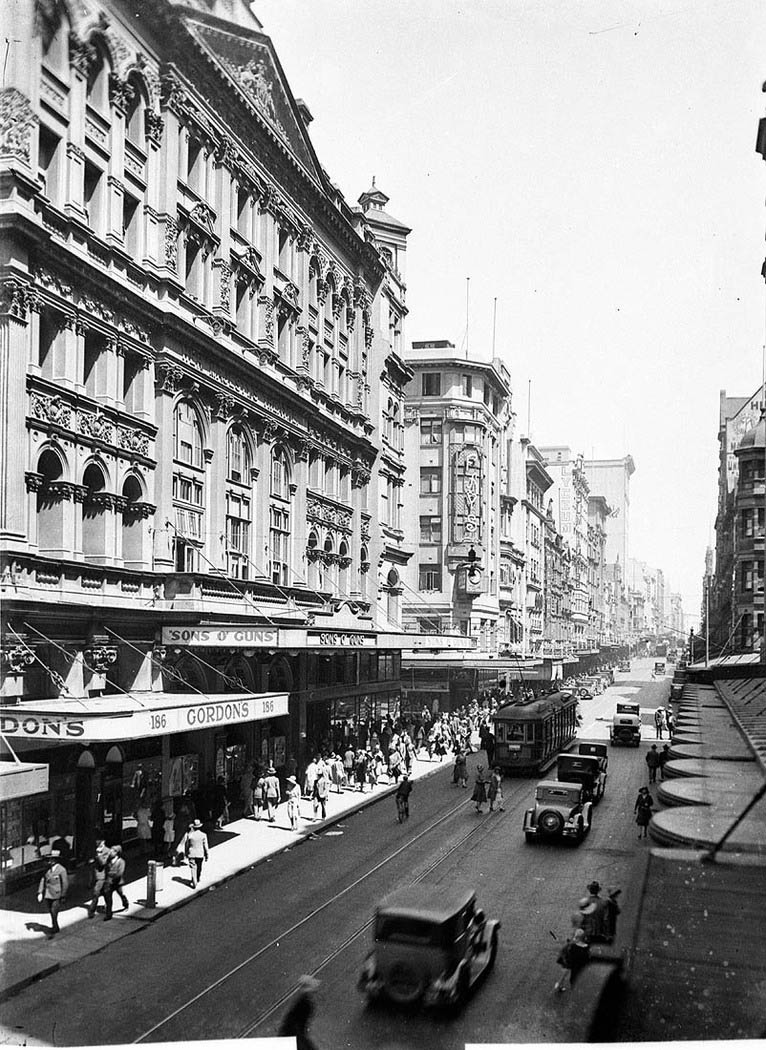 There were still four boxes in the proscenium, adorned with figure and flower paintings amid plush and gold satin and the auditorium was decorated in a scheme of cream, biscuit, brick red and gradations of blue. An additional luxury was that the floors of both the circle and the stalls were carpeted.

This theatre had a narrower stage than the older one, 74 feet by 46 (22.5 by 14 metres), and a large proscenium arch with decorative panels treated to variously represent chased metal and tapestry. The act drop featured a painting of Greek figures represented as 'The Eighth Olympiad', and there was a front curtain of blue silk plush.

Her Majesty's had the latest technology, including improved fire precautions, a backstage switchboard with dimmers controlling the lights, and electric buttons in each dressing room to provide a warning call for artists. There was now an intricate pulley system on a grid above the stage to facilitate set changes.

JC Williamson again leased the new theatre, and used it as his Sydney flagship. It hosted the Australian premiere in 1910 of the musical Our Miss Gibbs with Leslie Holland and the much loved Fred Leslie.[media] Among its other notable attractions was the appearance of Henry Brodribb Irving as Hamlet on his 1911 tour. In 1922, following the amalgamation of JC Williamson's Ltd with J & N Tait, the company bought the building. [media]They sold it again in the early 1930s, claiming pressure from council rates and entertainment taxes. Her Majesty's was closed on 10 June 1933, and a year later was converted into a variety store and offices. The site was finally closed on 2 March 1970 and demolished to make way for Centrepoint shopping centre. 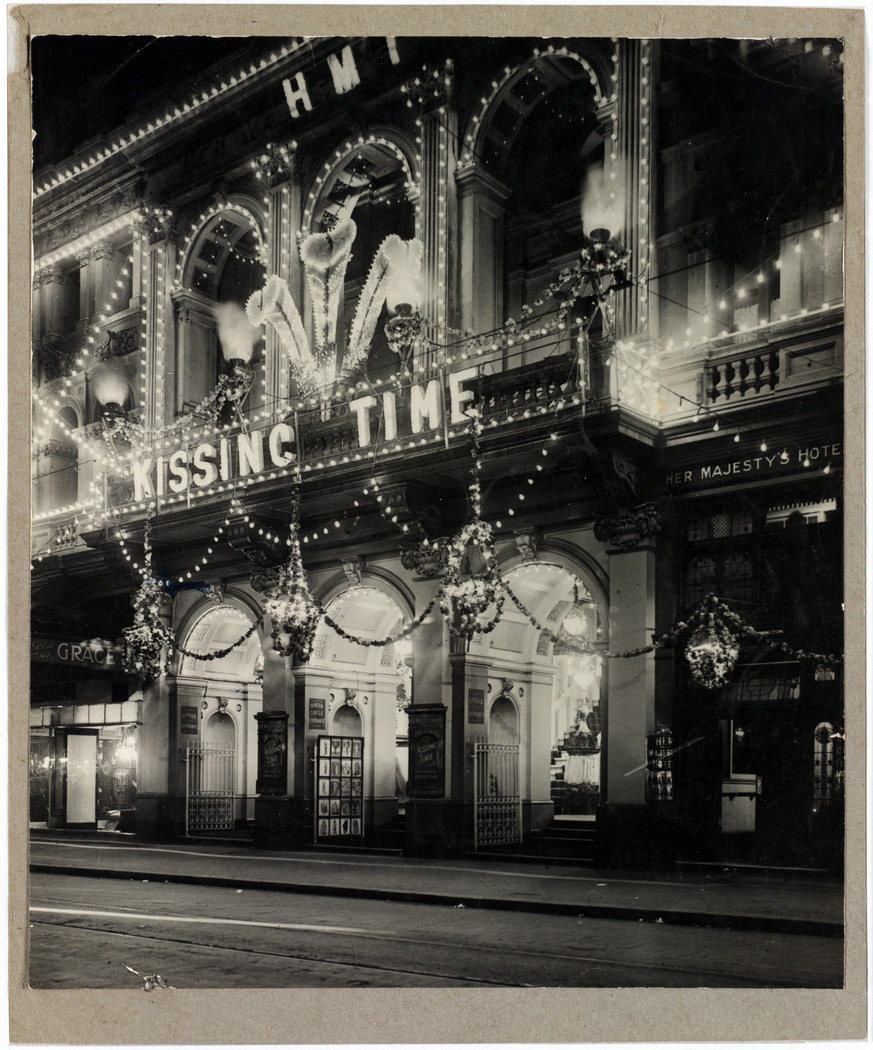 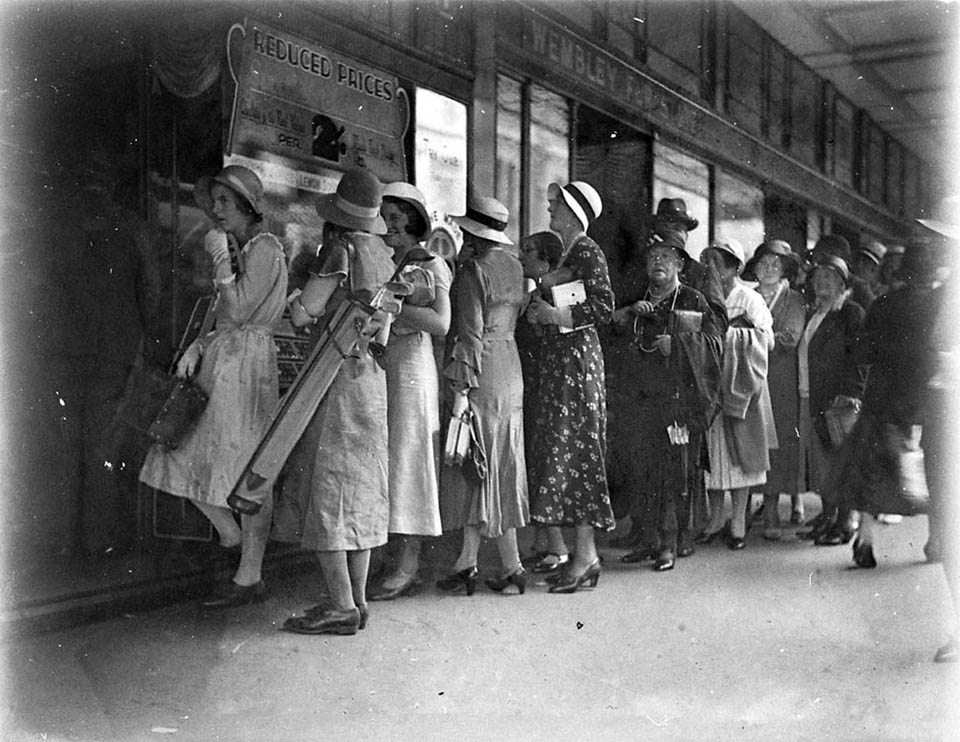 Sydney's third Her Majesty's theatre evolved from an existing theatre, the third one that went by the name of the Empire Theatre. It was on a different site from the previous Her Majesty's theatres, but the re-emergence of the name reflected a continuing association with the company now known as JC Williamson Pty Ltd.

[media]The Empire Theatre was in Quay Street, just down toward the Haymarket from Central Railway Station. It stood on a small and awkwardly shaped piece of land which was at first leased by Empire Theatres Ltd. The theatre opened in February 1929, and the company bought the site in 1934. 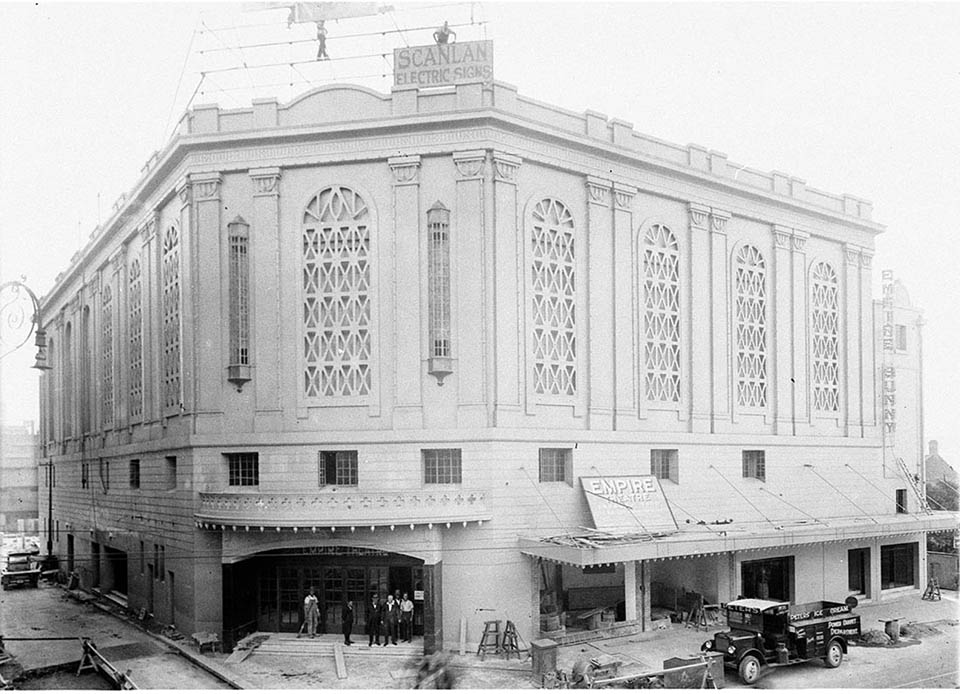 [media]The developers of the theatre presented a challenge to the architects Kaberry and Chard, because they wanted a large audience capacity. The resulting building, constructed diagonally across the site, held a maximum of 2,515 people. The auditorium was decorated in blue, a deep tone for the carpet and powder blue for the front curtain. There were 24 boxes or loges scalloped around the front of the dress circle, and large, somewhat impractical, stalls boxes on either side of the stage. The Empire, however, had only minimal facilities as a theatre. There was a very small lobby and no foyer, while the proscenium-arched stage, with a fly tower, was tucked into one corner of the site. 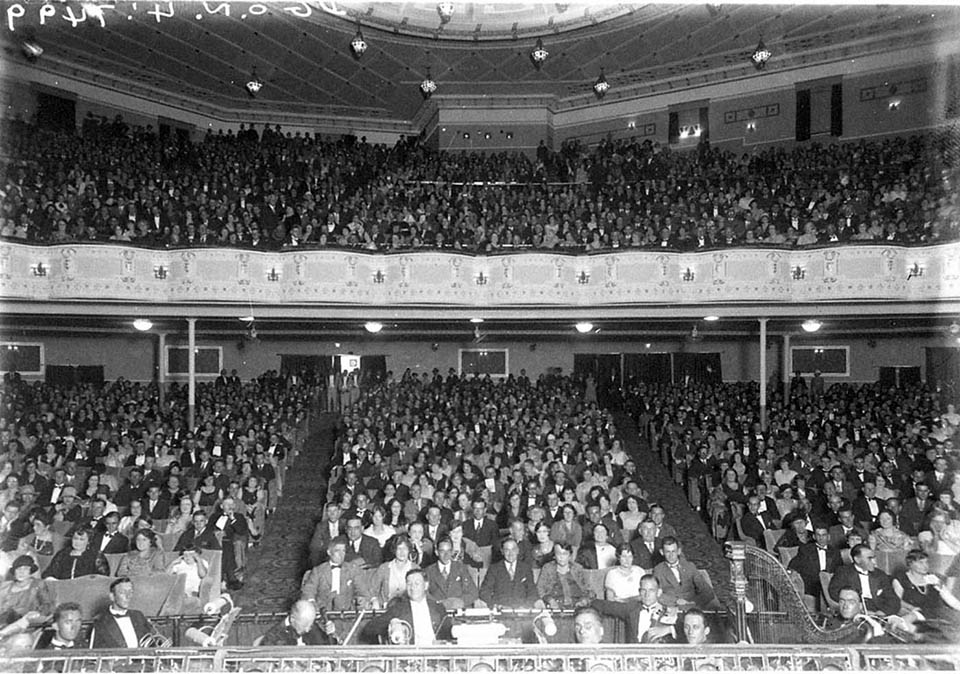 [media]This Empire Theatre opened with the musical Sunny but it only operated as a live theatre for two years. Partly as a result of economic depression, in 1929 it was converted into a cinema. It remained a picture house until December 1948, when a postwar shortage of theatres in Sydney made a revival of live presentations a viable proposition. It reopened as part of the Tivoli variety circuit, showing pantomime and the revue Take a Bow starring Two-Ton Tessie O'Shea, but soon after, in 1949, was sold to JC Williamson. They opened with a year-long show of the Kiwis Revue Company. The hypnotist Franquin, Oklahoma and a Gilbert and Sullivan season were among the shows that followed. 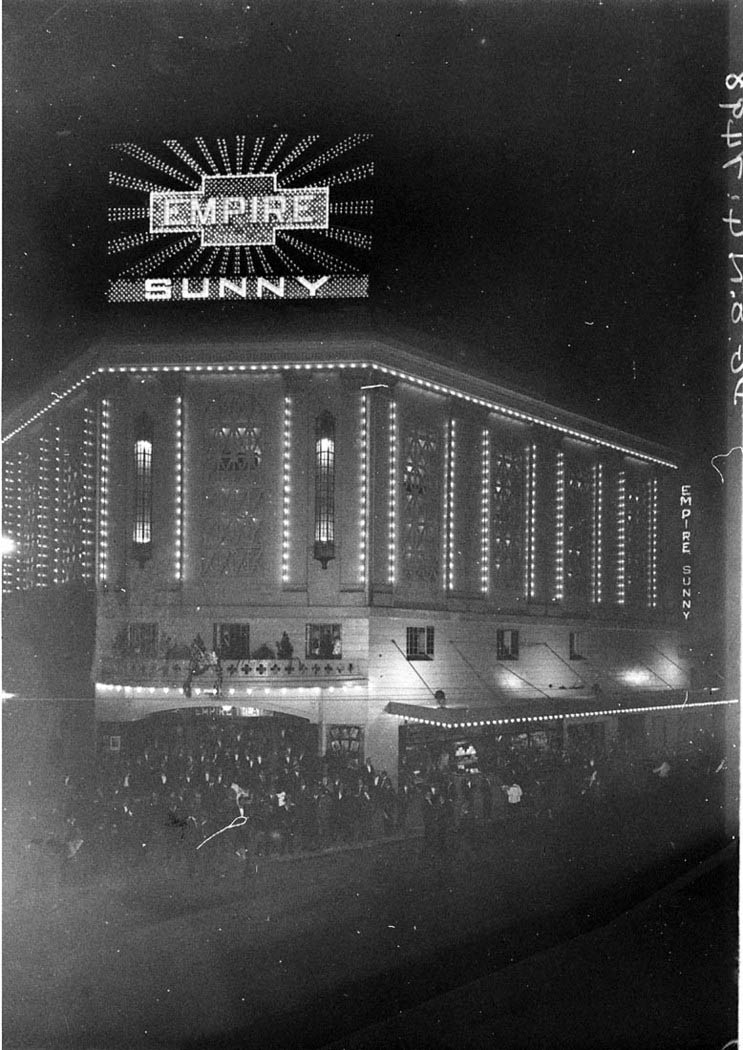 Five years later, in 1954, Williamson's made extensive alterations, partly in an attempt to recreate a perceived old-fashioned ambience in the interior. New side walls were installed to narrow the auditorium, and the boxes and the proscenium arch were modified. Some of the back stalls seating was also removed to expand the foyer. Musicals now featured, including productions of Can Can, Paint Your Wagon and The Pajama Game. [media]Further renovations followed in 1960, when Williamson's prepared the venue for the premiere of their major hit musical My Fair Lady starring Robin Bailey and Bunty Turner. For the opening on 21 May 1960 they also changed the name to Her Majesty's Theatre. 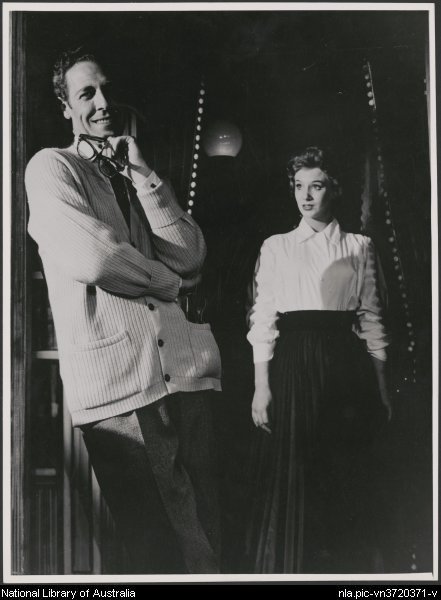 Her Majesty's remained in operation for another 10 years, still as a venue for musicals. Camelot, Funny Girl, Hello Dolly and Fiddler on the Roof all played there. Then, on 31 July 1970, while it was leased to the Australian Elizabethan Theatre Trust, it was destroyed by fire during an opera season. Another, smaller Her Majesty's was rebuilt to plans by architects John W Roberts and SA Baggs, who cleverly adapted the building to include a larger stage. It reopened in November 1973 with another musical, A Little Night Music. After a period under the title of Her Majesty's it then reverted to the name Empire Theatre. The slow demise of Williamson's, and the disposal of their properties, led to the end of the theatre and limited commercial redevelopment.