Meadowbank is one of 16 suburbs that form the City of Ryde. The city is approximately 12 kilometres from the centre of Sydney and occupies most of the divide between the Parramatta and Lane Cove Rivers. It is bisected from west to east by one of Sydney's busiest roads, Victoria Road. It is crossed north-south by another main road, Lane Cove Road and is skirted on the north-west by the M2 Motorway and Epping Road.

When Europeans arrived at Sydney Cove in January 1788, the Wallumedegal or Wallumede were the traditional owners of the area they called Wallumetta. This clan formed part of the Dharug language group.

Land originally granted to surgeon William Balmain in 1794 in the district of the Field of Mars was given the name Meadow Bank. Balmain returned to England in 1801, leaving his estates to be managed by his fellow surgeon D'Arcy Wentworth.

Wentworth agreed to sell Balmain's grants to John Bennett, an ex-convict who had been transported in 1795. By 1819 both the Meadowbank Estate and Chatham Farm to the north (modern Denistone West and Eastwood) belonged to Bennett. In 1823 Bennett was joined by his nephew William who inherited his estate, building Meadowbank House around 1835. William then sold Chatham Farm to Major Edward Darvall in 1855. William Bennett died in 1865 but his widow remained at Meadowbank until her death in 1879.

The other significant estate that formed part of modern-day Meadowbank was Isaac Shepherd's 95-acre (38.5-hectare) Helenie Estate. This was originally part of William Kent's grant of 1799. In 1795 James Shepherd, an ex-convict, was granted 30 acres (12 hectares) of land near the present Meadowbank. His son Isaac built the two-storey sandstone mansion Helenie. For a few years in the 1850s, Helenie was rented by Henry Parkes.

[media]The most significant impetus to Meadowbank's development was the construction of the Strathfield-Hornsby railway line, with a single track opening in 1886. When the railway line went through, the first station on the Ryde side was named Ten Mile but this was changed to Meadowbank in 1889. 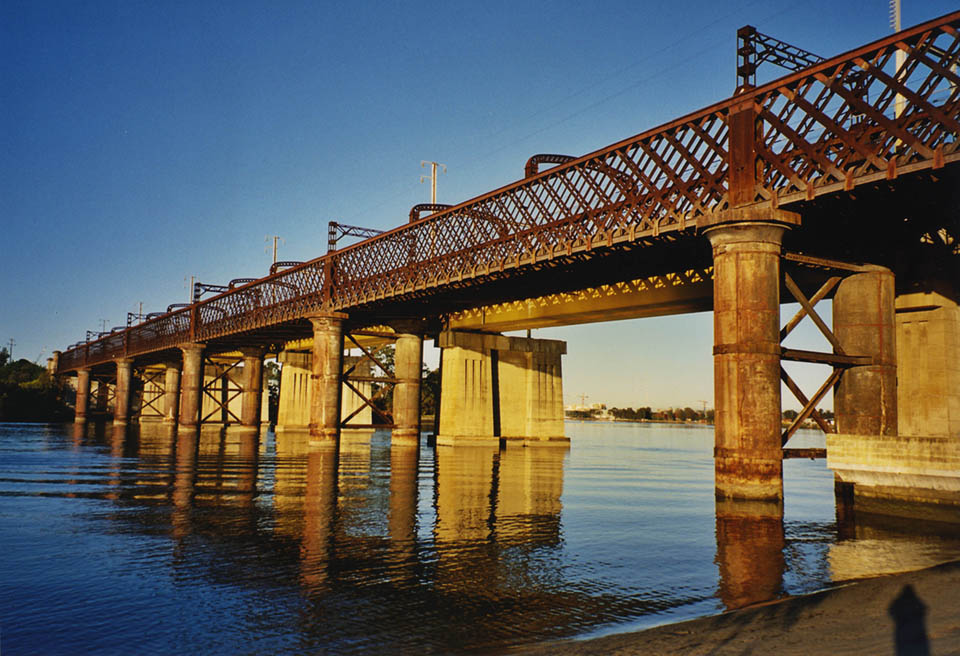 The railway had its most immediate impact at Meadowbank and West Ryde, where the owners of the large Meadowbank Estate carried out their first subdivision on the western side of the railway line in 1883, in anticipation of the railway, and a later subdivision closer to the line in 1888. Among the first buyers of land were Phillip Whistler Street, a barrister who later became Chief Justice of the New South Wales, and Ernest de Burgh, a civil engineer employed by the Public Works Department. They built houses facing each other at the top of the hill in Station Street, West Ryde. Next door was William Robert Digges la Touche, a bank officer. The railway and the resulting Meadowbank subdivision brought a new class of residents to this part of the Ryde municipality – professional gentlemen who commuted to the city.

On the east side of the railway line, Helenie was exposed to noise from the trains, and it was sold by Isaac Shepherd's heirs. Most of the estate was purchased by Mellor Brothers, a South Australian firm that established the Meadowbank Manufacturing Company in 1890,

The firm later produced tramcars and railway rolling stock. The land was cleared, a railway siding built and a tram road made to the wharf. The house built by the manager, originally called Bartonville (now The Laurels) survives. This industry resulted in a growing number of houses occupied by company employees. The Meadowbank Manufacturing Company was closed in 1930 during the Great Depression. In 1945-46 the old industrial site was converted to the Meadowbank College of Technical and Further Education.

A small portion of the Helenie Estate was purchased by another agricultural implement manufacturer, Rhodes and Company. They were agents for Simon's flour milling machinery. By 1895 the Meadowbank works was considered to be 'one of the brightest and busiest little centres of industrial interest in the neighbourhood of Sydney'. Both of these manufacturers were attracted to the area by the practicality of access to both rail and river transport.

Another significant industry that came to the area was Hoover. In 1953 it took over and expanded an already existing factory. It began manufacturing in Australia from the Meadowbank plant in 1954, producing washing machines, vacuum cleaners and floor polishers. Manufacturing at this plant ceased around 2001.

Housing for the people

While industry has played a major role in Meadowbank's development, the suburb is also residential. One of the most innovative housing schemes of the period after World War II operated in the Ryde municipality. The housing shortage that existed before the war had worsened during the war, because of building restrictions. At the end of the war, as ex-servicemen and women were demobilised, marriage rates increased – and so did the demand for houses. With federal funding, the New South Wales Housing Commission also embarked on a large-scale program of welfare housing. However, Ryde Council wanted more than mere welfare housing. Their scheme offered would-be home-owners the option of buying their houses, with small deposits, a low rate of interest, and repayments over a long period. The scheme was distinguished also by its employment of a panel of 10 architects and town planners who were then at the leading edge in their field.

The scheme aimed to construct 2500 homes over a five-year period. Each subdivision boasted bitumen-surfaced roads, kerbing and channelling, footpath paving, street beautification and general drainage. Each subdivision was planned with attention to the natural contours of the land, with roads designed to reduce traffic speeds and provide a maximum of safety to residents within the area. The planning of the subdivision was linked with the planning of each house in its own garden setting.

In the end, between 1945 and 1952, 599 houses were built by Ryde Council and a further 360 were built under a Ryde Loan scheme. Project No 1 was completed in 1946 and consisted of 44 timber-framed fibro houses in Meadowbank, in an area bounded by Richard Johnson Crescent and Constitution Road.

Meadowbank was not all industry and houses. To the west of the railway bridge was Meadowbank Park and Baths. These were originally created through the efforts of a local progress association. The baths continued to operate until around 1943, when effluent pollution from factories in Homebush Bay forced them to close.

Rowing was a significant pastime on the Parramatta River from the middle of the nineteenth century. By the 1850s, the annual Anniversary Regatta, held on 26 January on the Parramatta River, was a major event in Sydney's sporting calendar. From the 1860s the river was the venue for major inter-colonial rowing races and from 1871 it became a venue for inter-varsity races too. A championship rowing course was defined on the river, beginning at Charity Point near Isaac Shepherd's House Helenie, and finishing at a group of three rocks called The Brothers at Henley.

Over recent decades, as the area has become less industrialised, the residential component has increased. Medium density housing developments are taking advantage of the Parramatta River foreshore.