[media]Moore Steps are located on the east side of Sydney Cove and connect east Circular Quay with Macquarie Street. The stairway is named in honour of the City Mayor at the time, Charles Moore, as a plaque in the wall at the landing attests. 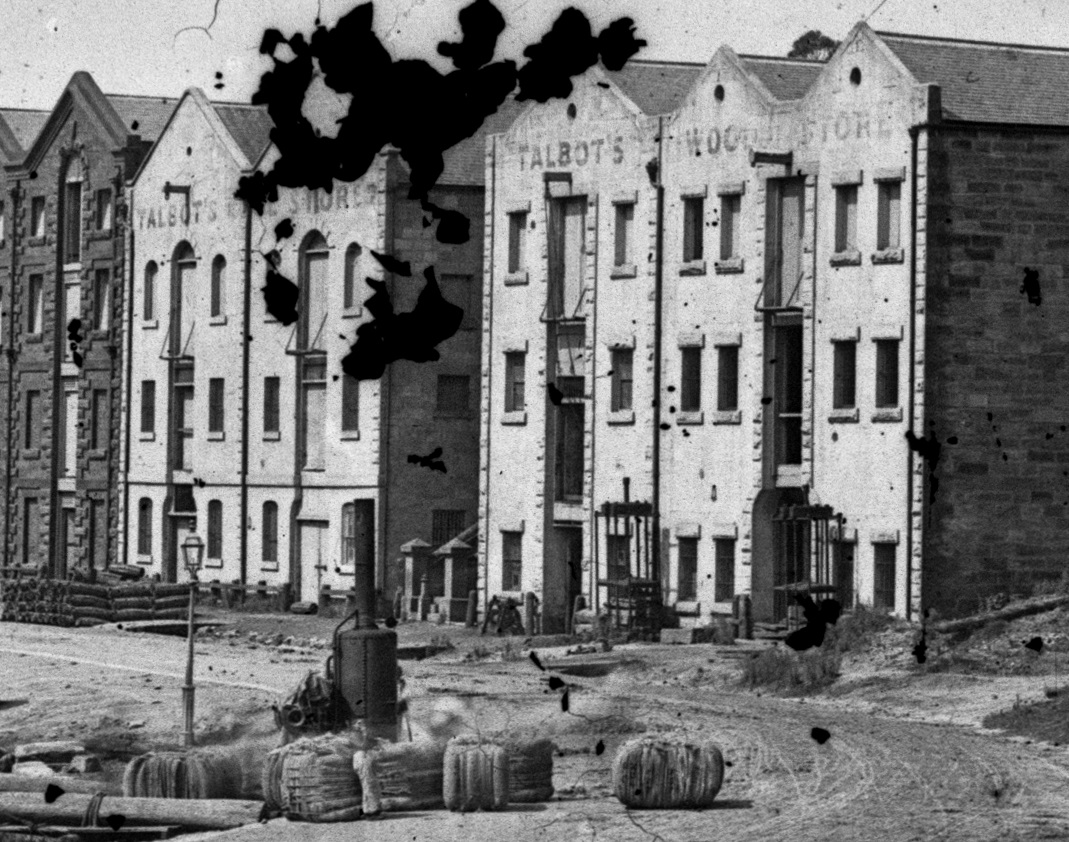 The design of Moore Steps that we see today follows a drawing signed by the City Engineer, Edward Bell, in 1868 but it was not the first design undertaken for this stairway.

[media]The first version, a drawing dated 1866, also signed by Bell, shows a single flight of ‘bottom block Pyrmont stones’ rising to a mid-landing where the stairway divides into two and rises in separate flights to Macquarie Street.[1] Here the space between the flights is crowned with a wrought iron lamp frame that carries a central gas lamp. All three flights are contained by a sandstone balustrade of ashlar blocks ‘drafted and dabbed on both sides’ and topped with a half-round coping, a common detail for stairways of the period.[2] At the Macquarie Street level, sandstone flagging continues out across the footpath to the kerb, providing a contrast to the general pavement and signifying the entry point to the stairway. The whole structure is shown within a reserve 20 feet wide and supported on sandstone arches. 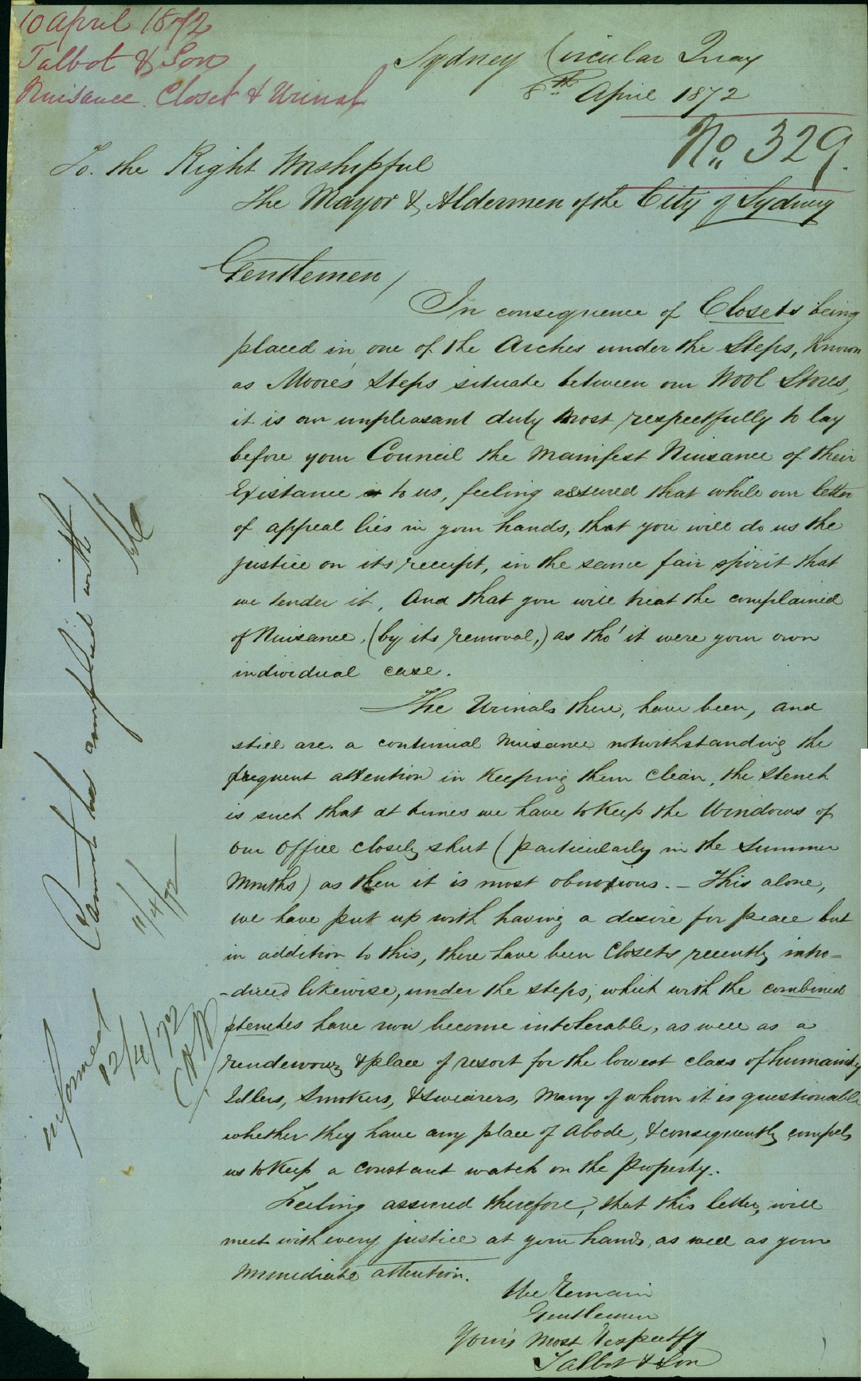 Following the execution of this first design, a building contract was drawn up and executed in March 1867 but then everything halted. There was a problem; the ownership of the land was in dispute. Litigation was brought by Messrs. Talbot and Company who owned the store buildings on either side. The dispute was finally resolved and the Government Gazette proclaimed the land as being dedicated ‘to the public as a thoroughfare and footway’.[3]

An alternate design was then drawn up and again signed by Bell in 1868. It consisted of a single straight flight with an intermediate landing. The sandstone piers at Macquarie Street supported a wider wrought iron lamp frame than in the earlier version. A construction contract was signed with different contractors and the stair that we see in this location today follows this second design and is still largely original although it has gone through several restorations and the width of the space that it occupies has been increased.[4]

[media]One significant material difference between the two design specifications was the change in material for the steps themselves from Sydney sandstone to Melbourne bluestone. During this period it became apparent that whilst the golden sandstone native to Sydney was a good stone for fine carved detail it was too soft to last long in high traffic situations such as steps. The much harder basalt, known as Melbourne bluestone thus began to be used. 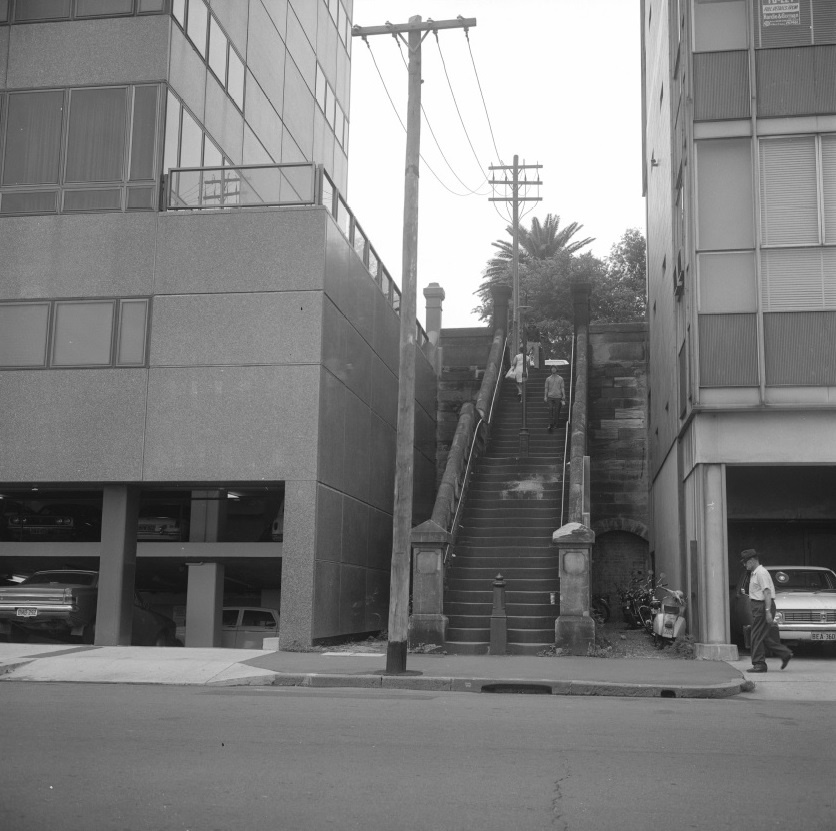 Having completed the construction of the stairway the Sydney Municipal Council was now responsible for its maintenance and they would receive demands to address its ‘ disgusting and filthy state’ remove an ‘accumulation of refuse’ and ‘a putrifying dog underneath the steps’.[5] The installation and subsequent removal of earth closets in 1867 and the removal of a urinal in 1906 due to complaints from Mr Talbot also were dealt with by the council. It became necessary to provide barricades to the undercroft space to prevent it becoming the ‘resort of undesireables’ and at one time the space beside the stairs was leased back to the neighbour and one time litigant Mr Talbot.[6]

Moore Steps has a high profile as Sydney’s public stairs go. This is due to its location and views, linking the popular public foreshore and promenade of East Circular Quay with the institutional and political Macquarie Street. Often commercial interests offer to ‘restore’ the Steps in the hope that this will earn them their private company name on a public plaque, as evidenced by the current plaque acknowledging Mirvac Projects along with the project consultants. A previous plaque from 1977, no longer in evidence,  acknowledged the assistance of The Colonial Mutual Life Assurance Society Limited. The tussle over wording for these types of plaques and who as a result should get the biggest share of kudos occupies many pages of council records,[7] but in addition to commemorative plaques, contestation over this element of the public pedestrian network has assisted in its preservation and maintenance.[8]