[media]Peter Nicol Russell arrived in Sydney in 1838, having following his father and brothers from Hobart. The Russell family had operated a general engineering and foundry business in Hobart since arriving there from England in 1832. Hobart's small population restricted the growth of this enterprise and the family, led by the father Robert Russell, relocated to Sydney. Peter had stayed on for a few months to wind up the Hobart business before joining them. 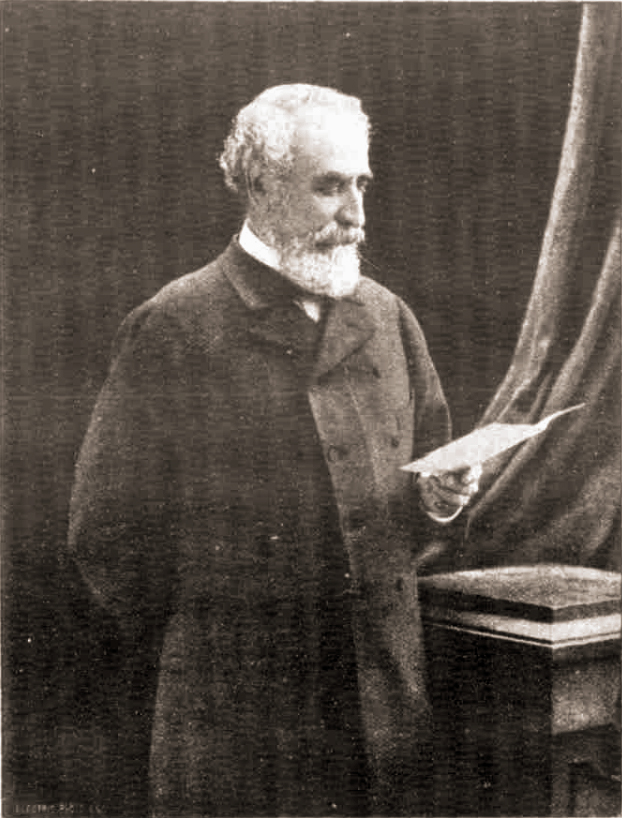 Once in Sydney, the Russell family set about re-establishing their engineering business. The new firm was named Russell Bros, reflecting the retirement of Robert snr from active participation in the foundry and the management by the three brothers, Robert jnr, Peter and John. The original foundry opened in Queens Place, a street north of and parallel to Bridge Street, between George and Pitt streets. After 1840, following the death of Robert snr, the works expanded into Bridge Street and Macquarie Place, where the brothers continued to manufacture iron work as well as sell imported machinery, such as steam engines imported from Scotland, and gas fittings for the expanding public gas network in Sydney. [1] The Russell brothers also made display models of some of their engines, including one that was used by a Mr M Whytlaw to demonstrate steam power at the Sydney Mechanics' School of Arts in October 1841. [2]

The Sydney Foundry and Engineering Works

[media]In March 1842 Peter purchased the James Blanche foundry adjacent to the Royal Hotel in George Street and opened the Sydney Foundry and Engineering Works. As his two brothers had refused to enter the venture with him, Peter used a portion of the family capital and, with the backing of his mother, purchased the existing business for £2,000. Russell worked solely in the casting of iron and brass at his new foundry, including kitchen ranges, parlour grates, hot plates, balcony and tomb railings, stairs and palisades. During the same period, his brothers had expanded their business to include shipbuilding, operating from a wharf in Sussex Street, with the Sydney Foundry casting brass and iron works for them. 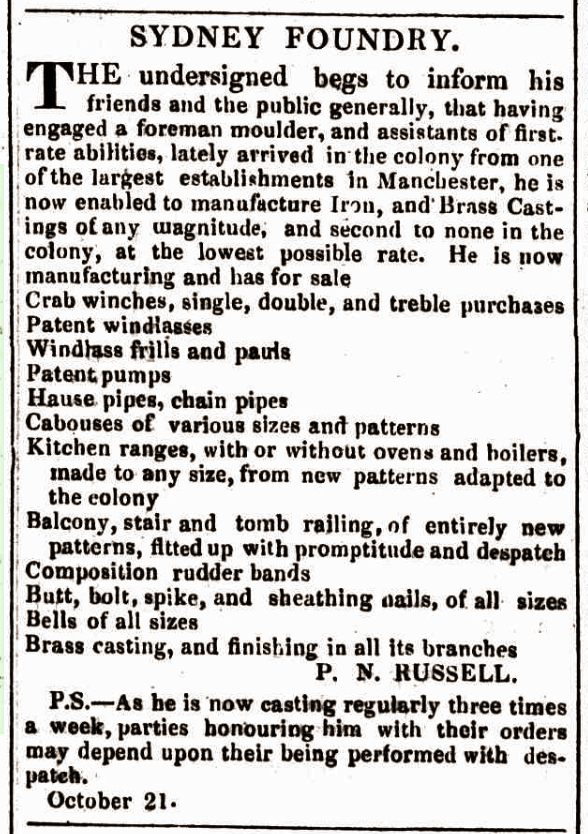 Peter Russell's casting foundry quickly began winning major contracts, securing the job of delivering all the required ironwork for the newly constructed Victoria Barracks, Darlinghurst Gaol, Newcastle Gaol and Maitland Gaol. Russell was also successful in winning a series of contracts with the City of Sydney from the late 1840s until the 1870s, supplying cast iron ward boundary markers, water pipes, stone-crushing machines for road base and gravel, water stand pipes, water locks and other associated infrastructure for water supply, including water troughs. [3]

In 1843, Peter's brothers' business Russell & Co went into insolvency and was forced to close. Russell & Co had been operating as a shipbuilding yard as well as running shipping lines from Sydney, but by 1843 had run up debts of £3,351, owing £358 after the sale of assets. [4] The collapse of the company and the loss of their Macquarie Place establishment, saw both Robert and John join Peter at the Sydney Foundry, while a third brother, George, was placed in charge of the Sussex Street shipyard, operating a marine engineering works, George Russell & Co, until 1855, when it was absorbed by PN Russell & Co. [5]

PN Russell & Co was founded in 1855, a joint venture between Peter, John and George Russell and JW Dunlop, the works foreman at the Sydney Foundry. The eldest brother, Robert, had died in 1849 while returning from a business trip to the Philippines. PN Russell & Co flourished, operating as a foundry as well as an importing and exporting business. The company expanded its works into Darling Harbour, with water frontage, and warehouses from George Street through to York Street. The main works and offices were in a block bounded by Duncan, Barker, Thomas and Steam Mill streets, close to Thomas Barker's former mill site. The operation at Darling Harbour developed into one of the largest engineering works in the country, manufacturing rail cars and rolling stock, road and railway bridges, crushing batteries for gravel and mining, columns and ornamental architectural iron work, steam dredges, engines and even gun boats for the New Zealand Government, used during the New Zealand Land Wars in the early 1860s. [6]

In 1859 Peter Russell left Sydney to take up the role of resident partner and purchasing agent of PN Russell & Co in London. In 1860 he retired from the business, only to return in 1864 again as purchasing officer in London, in which role he attempted to convince the company in Sydney to further specialise in importing rather than continuing manufacturing in an increasingly competitive Sydney market. [7]

Although [media]competition made profits in the engineering business increasingly hard to come by, it was industrial unrest that resulted in the company's closure in 1875. Ongoing workers' strikes and lockouts in 1873, 1874 and 1875 over conditions and pay, coupled with growing division among the company partners and increasing competition, led to a decision to close the works in June 1875, despite a reported capital of £250,000 and 1,000 workers. [8] 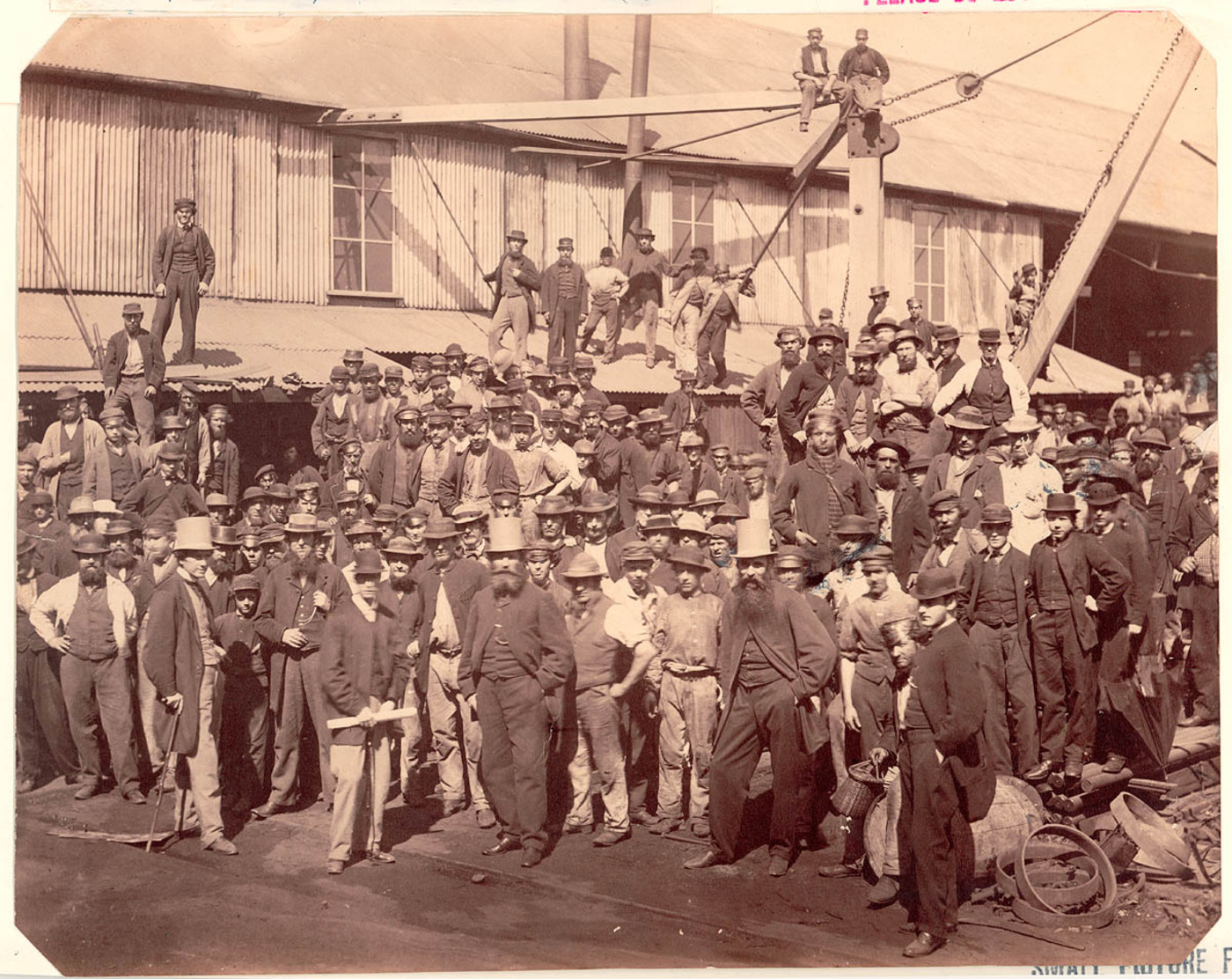 Peter, distressed at the closure of the business he had built up over 20 years, visited Sydney in 1877 to settle his affairs. He made his last visit in 1886. Although he didn't live in Sydney from 1859 onwards, his connection to the city and its engineering remained strong. For some time, Russell had been entertaining the idea of establishing an organisation to assist in the training of apprentice engineers in tertiary studies. To this end, in 1895 he gave £50,000 to the University of Sydney to endow the School of Engineering on condition that it was renamed the Peter Nicol Russell School of Engineering, which it duly was. In 1904 this was followed by a second £50,000 that came with a further £25,000 from the state government to provide an extension to the school or to erect new buildings. The money was used to fund the erection of a new School of Engineering, designed by the Government Architect, which opened in 1909.

Knighted in 1904, Sir Peter Nicol Russell died in London in July 1905, leaving over £13,000 to charitable organisations in Australia, including £3,000 to the Engineering Association of New South Wales.