[media]For a brief time in 2013 a rainbow striped pedestrian crossing decorated Taylor Square in Sydney's inner-city suburb of Darlinghurst. The City of Sydney decided to have it installed in time for that year's Gay and Lesbian Mardi Gras Parade. Even though the idea of a rainbow crossing was not entirely original, the events that followed the council's gesture initiated a movement in Sydney that was to have ramifications around the world. 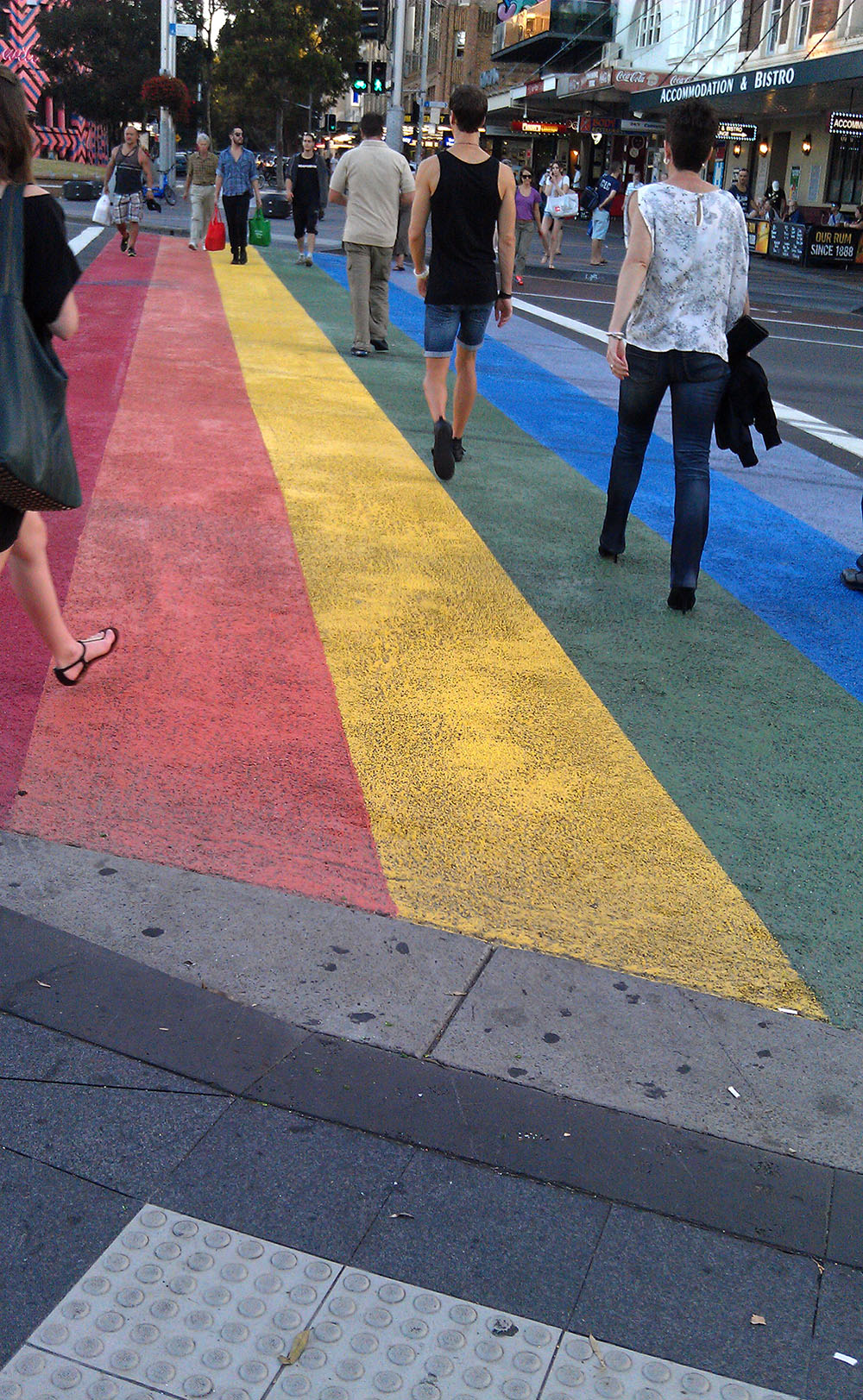 Rainbow crosswalks on Santa Monica Boulevard in West Hollywood were Lord Mayor Clover Moore's inspiration. These had been painted as part of the 2012 Gay Pride Month celebrations in the USA and they had been such a success that they were allowed to remain in place. [1] The rainbow had already been popularised as a symbol of the gay community over thirty years previously after San Francisco artist Gilbert Baker designed the first rainbow flag in 1978. [2] It was artist Martin Duvander's idea to mark crosswalks in rainbow colours on Santa Monica Boulevard in 2012 because it occurred to him that they were 'untapped canvasses just begging to be used for a social statement'. [3]

[media]A budget of $75,000 was initially allocated by the City of Sydney for painting coloured stripes at two existing crossings on Oxford Street with the same hard-wearing and non-skid material used to mark bus lanes. People visiting Sydney for the Mardi Gras inject around $30 million into the Sydney economy each year and, together with other nearby art installations, the rainbow crossings were expected to justify their cost by ensuring that Oxford Street would remain a focal point for the 2013 celebrations. Oxford Street has been a hub for Sydney's gay community since the 1970s and it now forms the first part of the route for the annual Gay and Lesbian Mardi Gras Parade after it sets off from Hyde Park. [4] 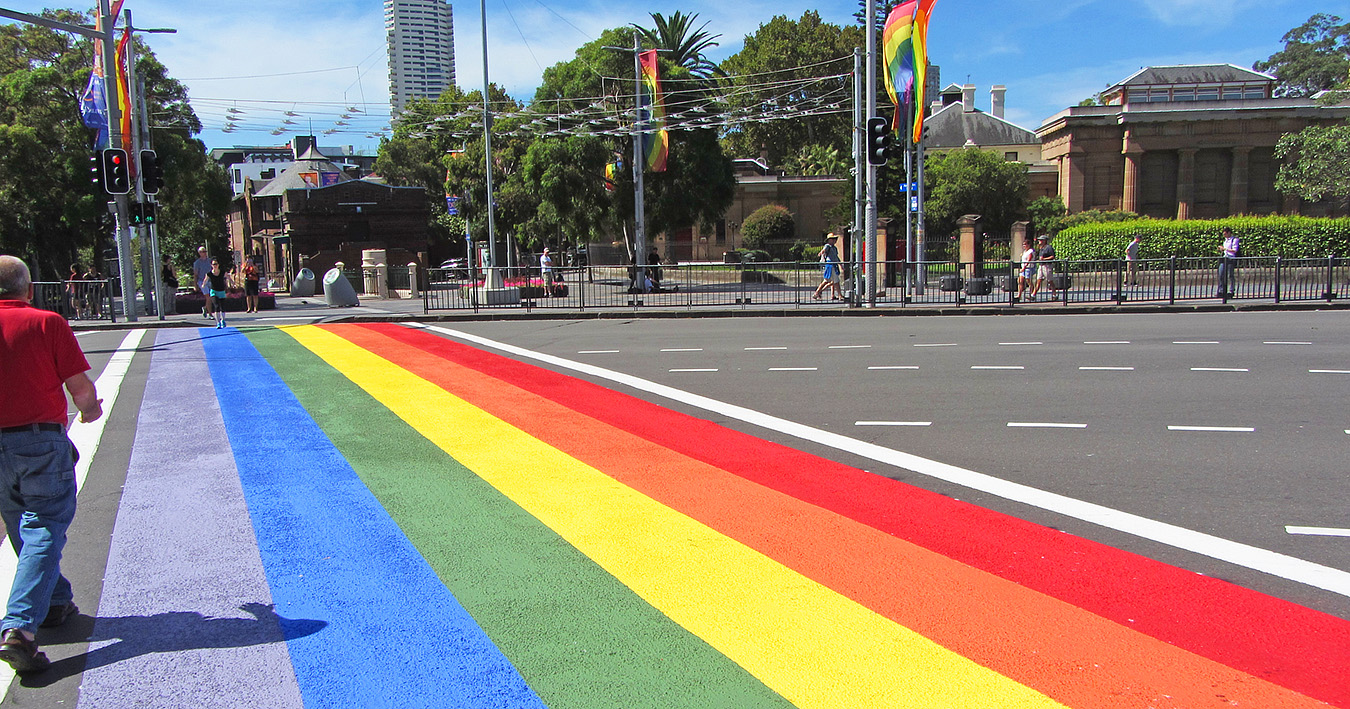 [media]The State Government's Roads and Maritime Services department gave permission for the project to go ahead, but only on the proviso that the crossings were removed by the end of March at a cost to council of $30,000. This, and other safety-related conditions, created a budget blowout that led council to decide that only one rainbow crossing should be painted. This would be at the symbolic intersection at Taylor Square, the starting point of Sydney's first ever Gay Mardi Gras march in 1978. Despite setting aside the necessary funding for its removal, council hoped that the crossing would be just as successful as those on Santa Monica Boulevard and that public opinion would persuade the New South Wales roads minister to allow the crossing to remain in place. [5] 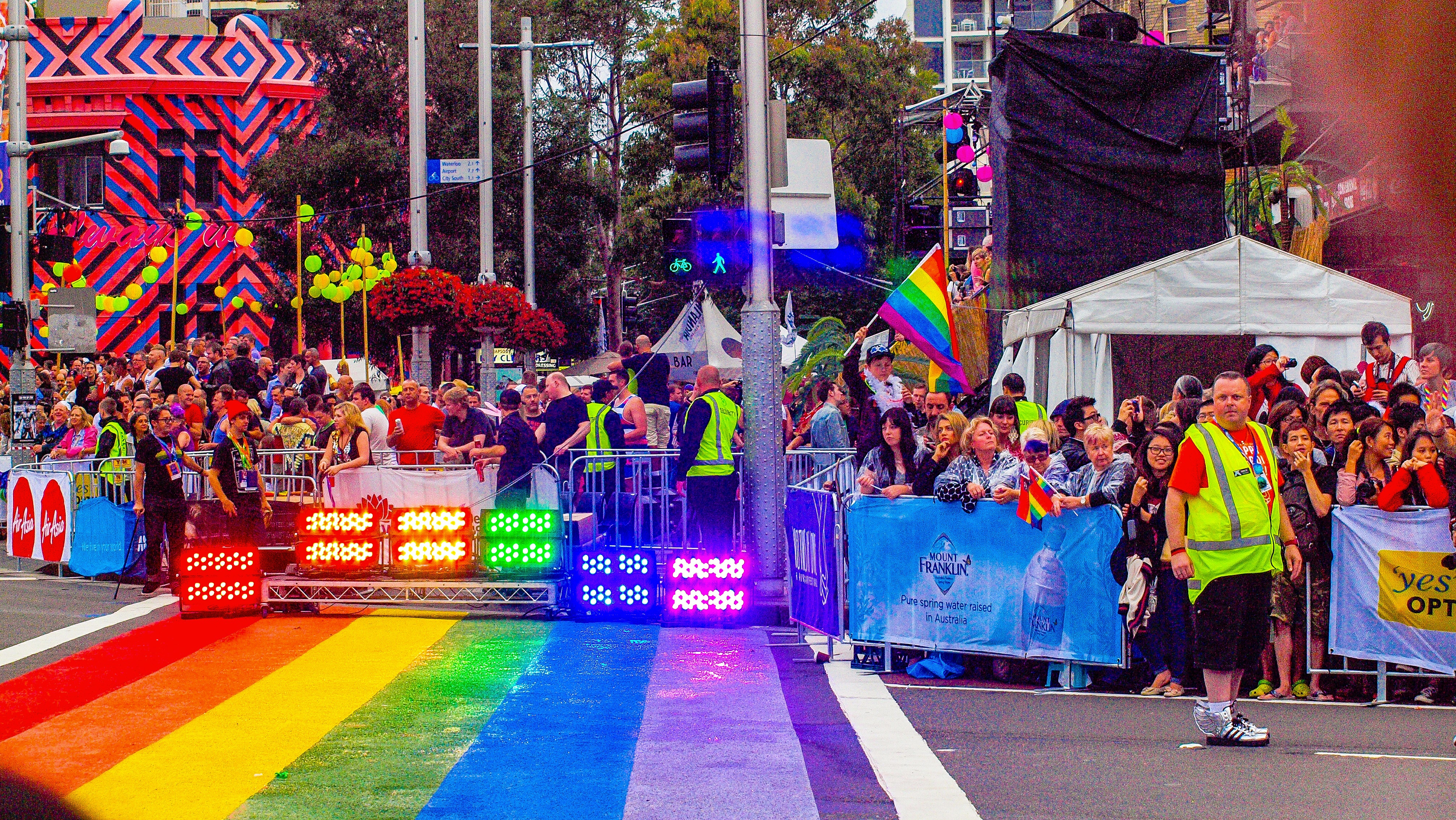 The rainbow crossing was painted overnight on 25 February 2013 and was an instant success, just as the City of Sydney had hoped it would be. Social media was abuzz with photos and 'selfies' featuring the crossing. For many people it was a touchstone for the growing campaign to legalise same-sex marriage in Australia while others simply enjoyed it as a vibrant addition to the Sydney scene. But not everyone welcomed it. One newspaper letter writer, for example, complained that 'compulsory pieces of public infrastructure should not force upon pedestrians political views which contravene their religious or moral conscience'. [6]

[media]In the event, the state government declared that the coloured stripes must be removed after the parade, as originally stipulated. Despite protestations from the City of Sydney, a petition from the general public, and objections published widely in traditional and social media, a team of road workers moved in on the evening of 10 April 2013 to tear up the road, re-surface it and reinstate the original white pedestrian crossing lines overnight. 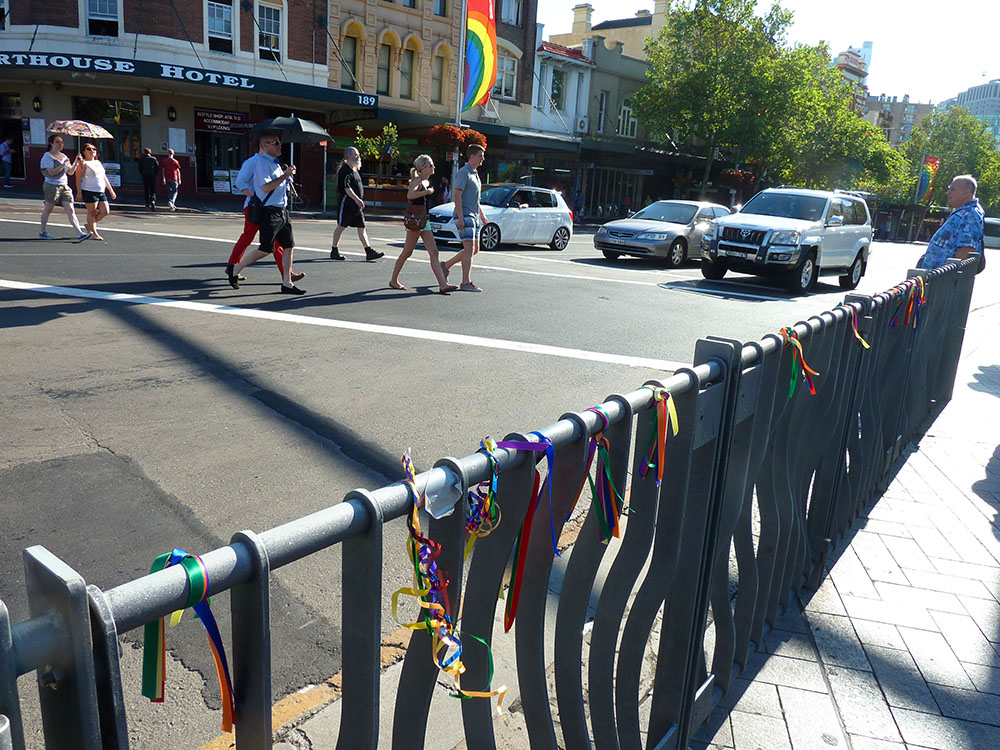 [media]Some saw this act as a continuation of the antagonism between the State Premier, Barry O'Farrell, and the Lord Mayor, Clover Moore. Others considered it disrespectful to Sydney's gay and lesbian community. But NSW Roads Minister Duncan Gay insisted that the stripes were removed purely for safety reasons. Monitoring of the site had shown that pedestrians posing for photos were taking risks that might eventually lead to someone being struck by a vehicle. He encouraged people disappointed by the removal to lobby for an alternate, more suitable location for a rainbow – an open, paved pedestrian area, for example, rather than a busy, six-lane arterial road. [7] 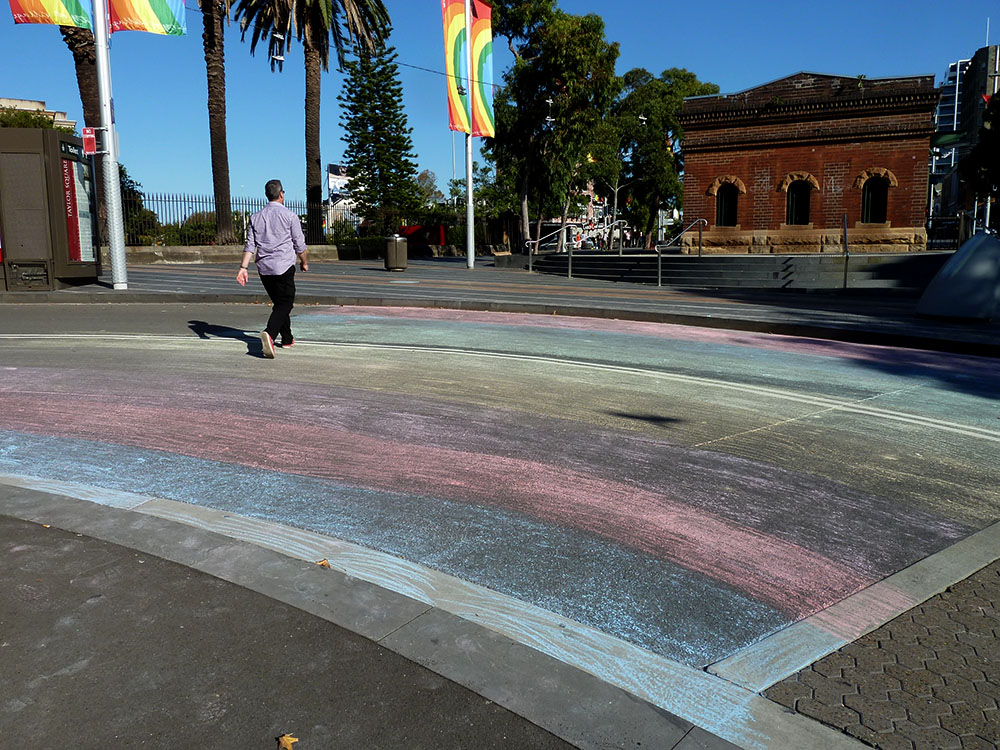 [media]The removal of the Taylor Square rainbow crossing created an even bigger stir than its original installation. To mark its passing, people attached unofficial rainbow flags to poles in Taylor Square and tied rainbow ribbons to safety fences. But performer and activist James Brechney had a fresh idea for an alternate location that somehow captured the zeitgeist. A few hours after the official rainbow crossing was removed, Brechney, with the help of friends, chalked a rainbow across a laneway near his house in Surry Hills. The photograph they took that afternoon went viral, his friends started chalking their own rainbows and the next day he started a Facebook page DIY Rainbow Crossing (soon changed to DIY Rainbow for simplicity). [8] Within two days the page had more than 7500 likes and counting. [9] 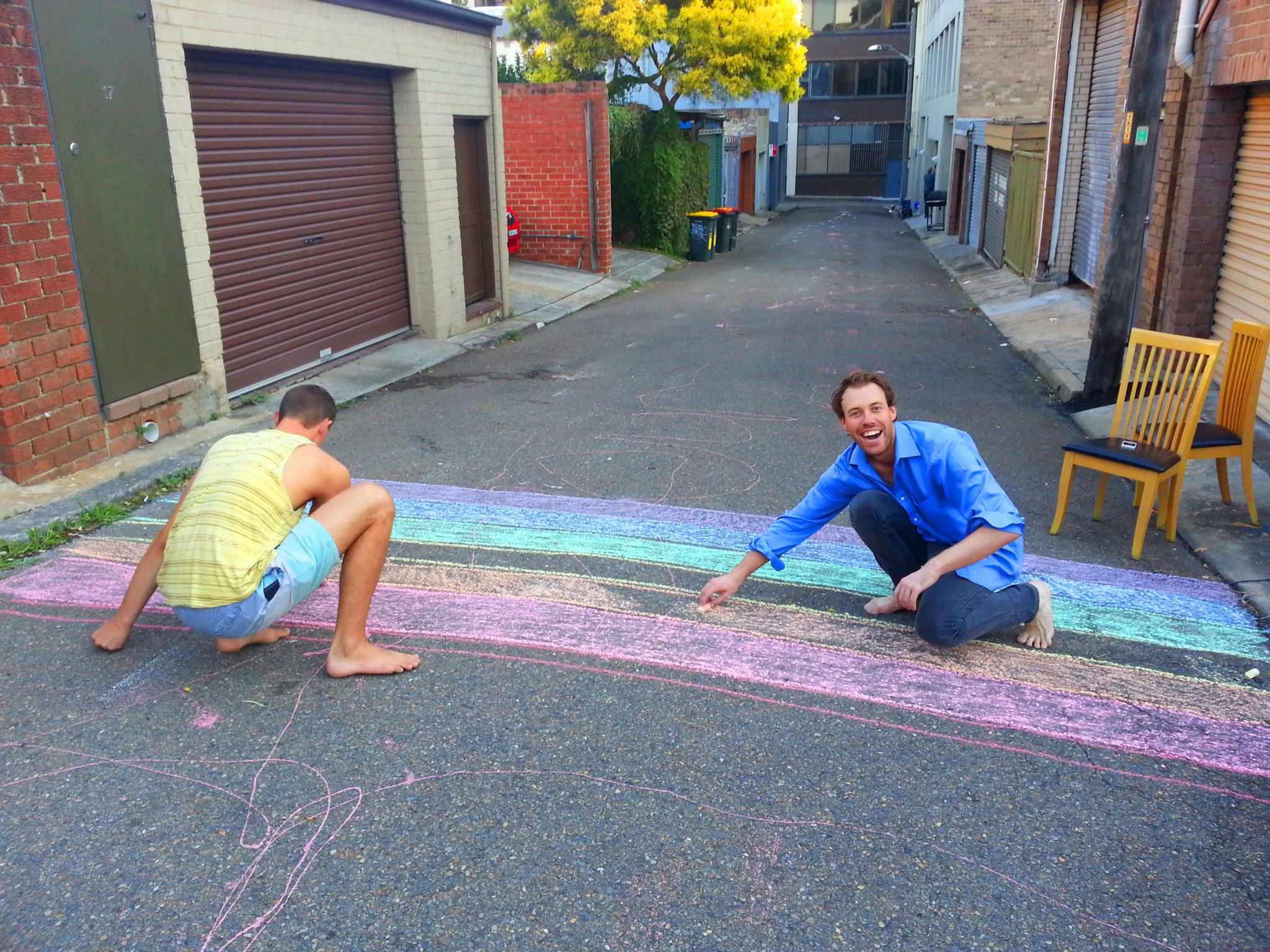 [media]The do-it-yourself rainbow movement had taken off and suddenly there were pop-up rainbow crossings everywhere, on streets, footpaths and driveways, [media]not only in the inner city but in outer suburbs and eventually [media]all over Australia. Shops, businesses and individuals were committing little acts of civil disobedience by chalking graffiti on the pavement to demonstrate gay pride, solidarity with the gay and lesbian community or support for same-sex marriage. [10] 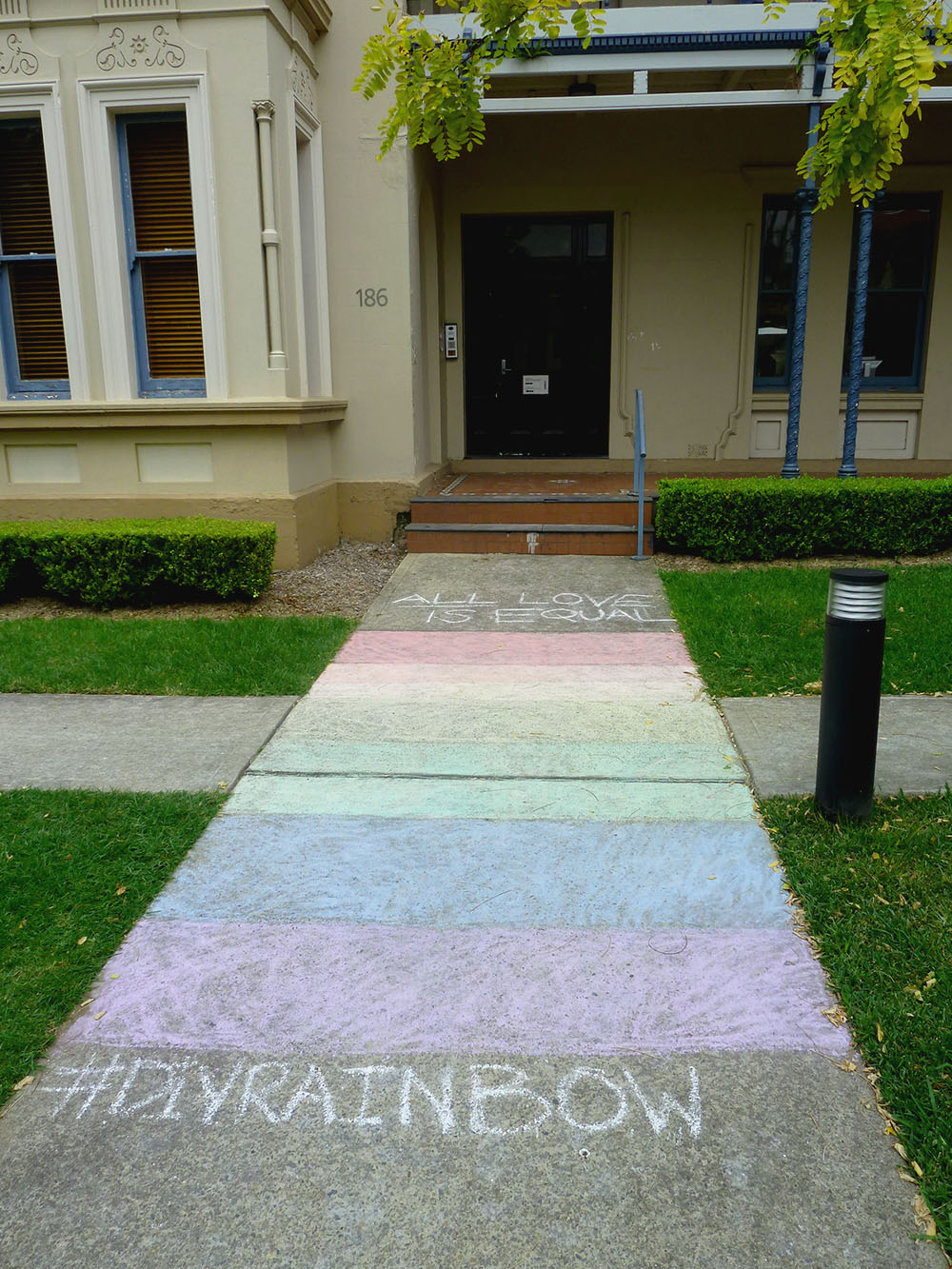 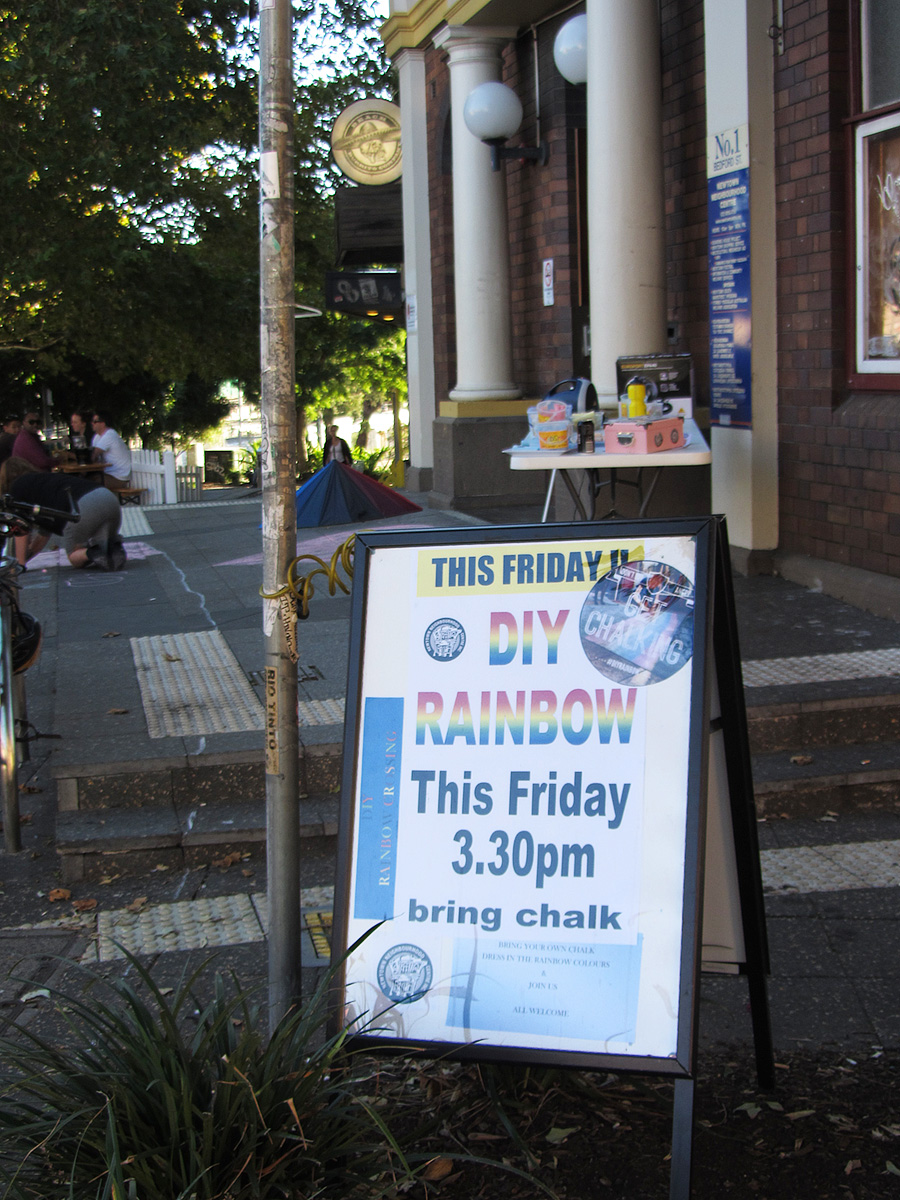 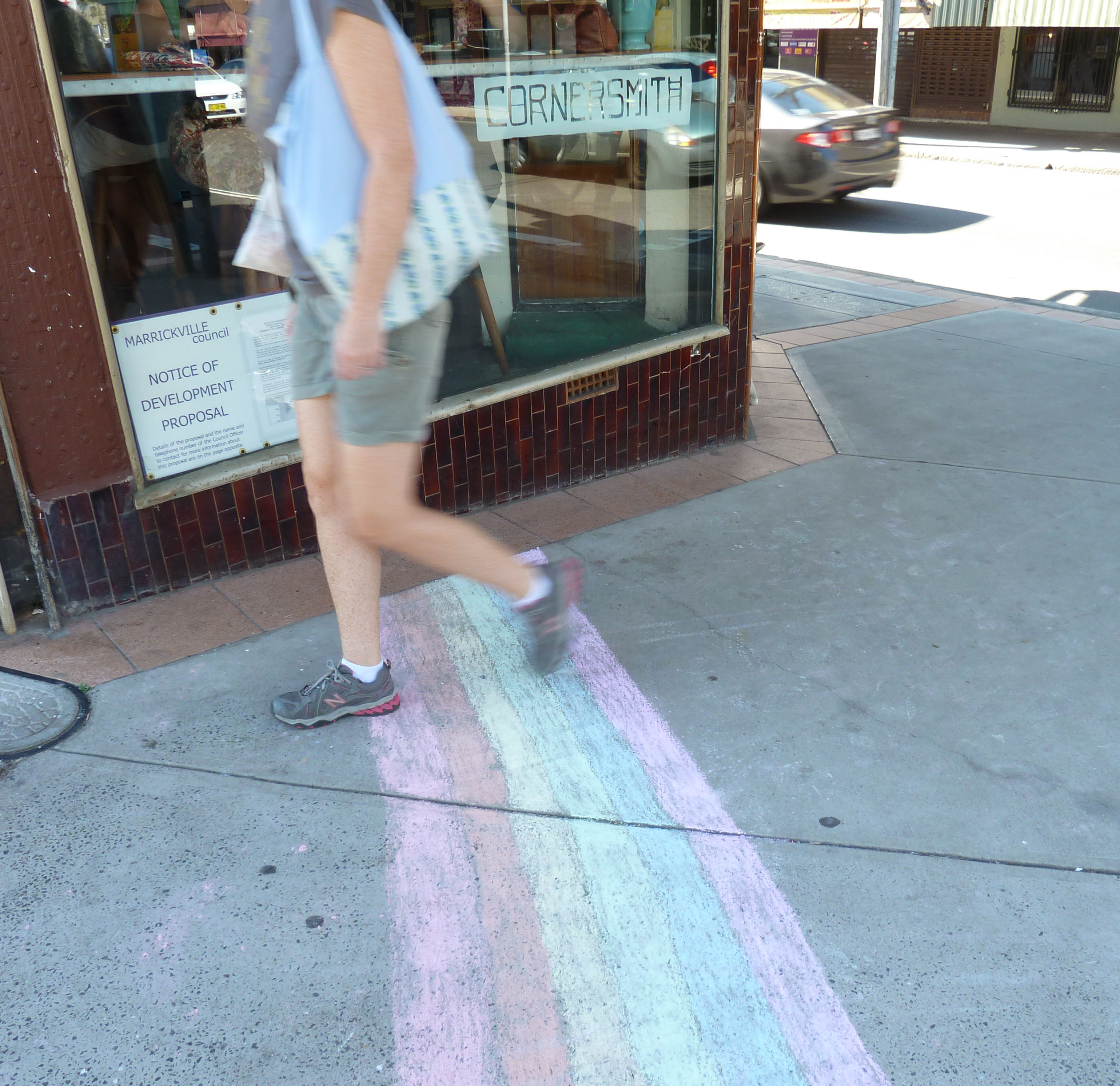 [media]People also began chalking rainbows as far away as the USA and Asia while around 58,000 people around the world became fans on the DIY Rainbow Facebook page. This page has been maintained and people still send photos of their crossings, some chalked as individual acts of defiance, others incorporated into mass demonstrations for causes such as marriage equality. Founder James Brechney contends that the movement will remain relevant so long as countries around the world continue to discriminate against GLBTQ people (gay, lesbian, bisexual, transgendered and queer). [11] 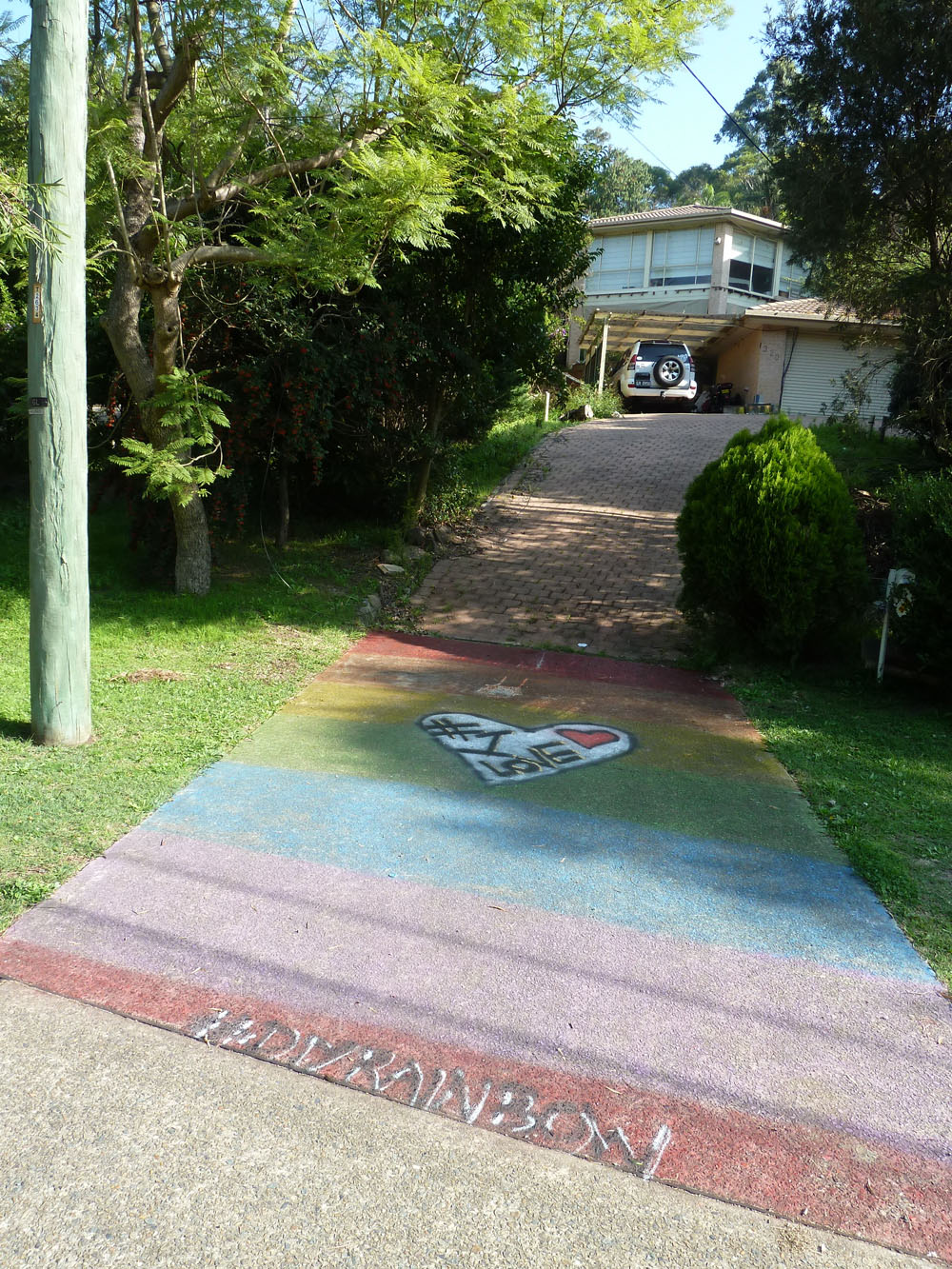 Sydney [media]now has an official permanent rainbow crossing in the shopping centre at Summer Hill, an inner western suburb. After council workers hosed away two chalkings made by local people in the early days of the DIY rainbow crossing movement, Ashfield Council agreed to paint a rainbow grid that people could chalk in as they wished. It was a crossing that didn't cross a road, but this pleased NSW Roads Minister Duncan Gay who saw its location as exactly the kind of safe alternative he originally recommended. [12] The continuing enthusiasm of local residents and shopkeepers indicates the kind of widespread support that exists for the GLBTQ community in Sydney, but as a location, Lackey Street Piazza doesn't have quite the same cachet as Oxford Street's Gay Golden Mile. 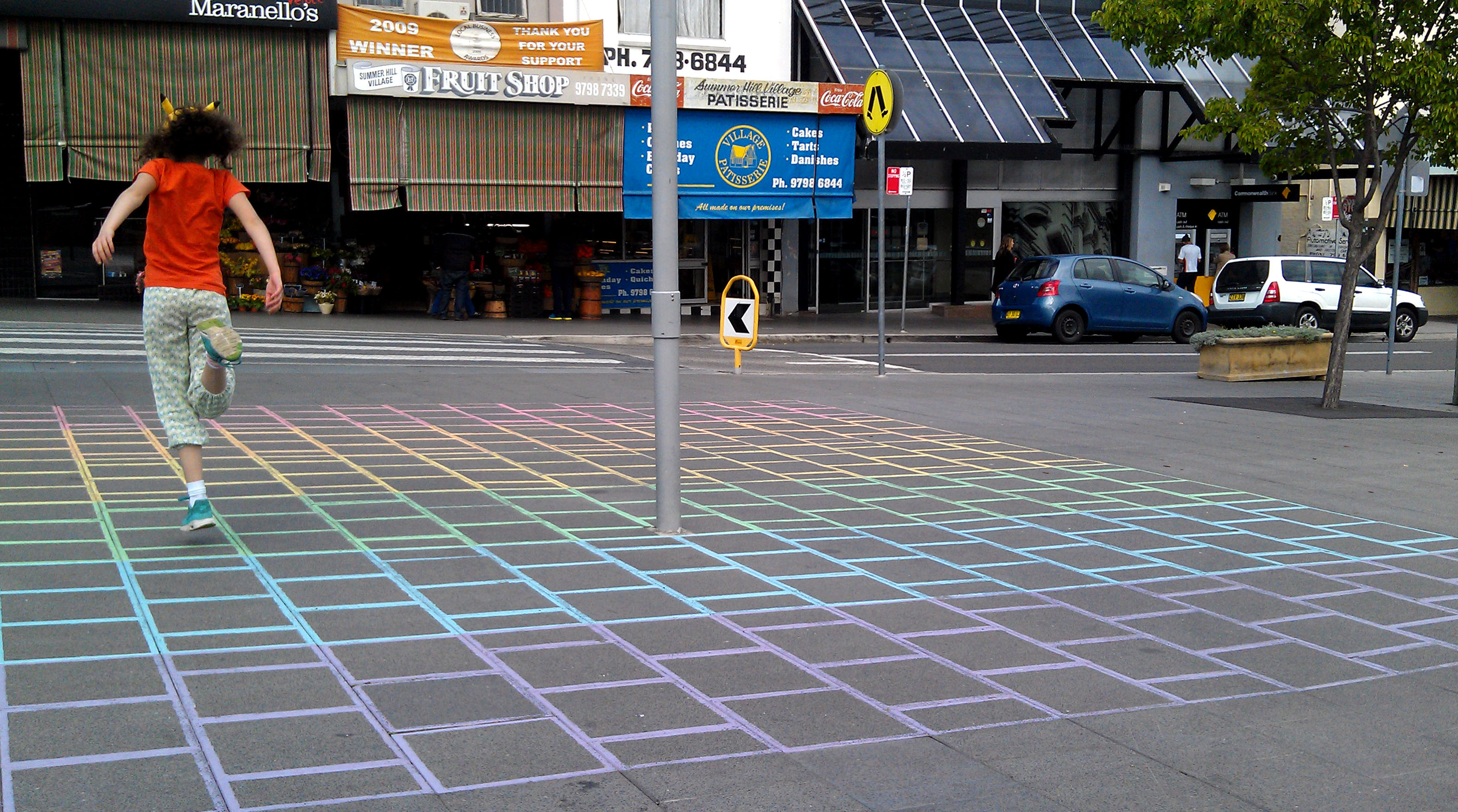