The Beatles in Sydney

[media]At 6.30am on the morning of 11 June 1964, The Beatles flew into Sydney’s Mascot International Airport, where a crowd of 1,000 greeted them. [2] Not everyone was pleased to see them. One mob held up a banner that read 'Go Home Bugs – NSW Anti-Trash Society.' [3] Nevertheless their arrival, along with the new independence of teenagers and various social changes, meant the tour was a cultural phenomenon. 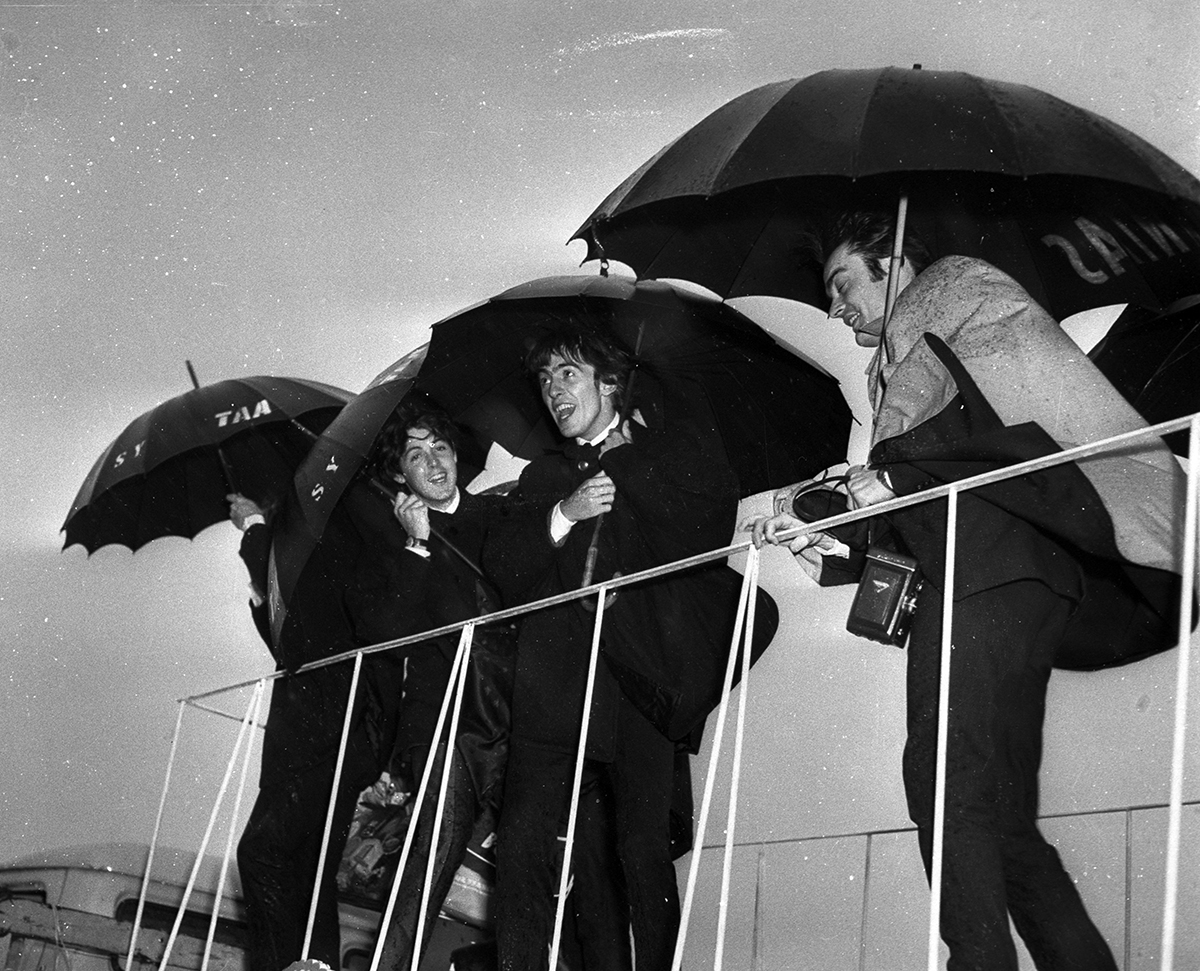 The Beatles on parade

The Beatles were John Lennon, Paul McCartney, George Harrison and Jimmy Nicol (who was standing in for Ringo Starr who had been hospitalised in London for a sore throat.)

Although it was cold and raining heavily, the band was paraded for the crowd on the back of an open-top truck. Alarmingly, a woman ran to the truck and threw her six-year-old child, who had a disability, at The Beatles, shouting, 'Catch him, Paul,' in the hope that The Beatles could provide a cure. McCartney did catch him and the boy was passed back to his mother when the truck stopped. [4]

A press conference was held at the Sheraton Hotel from 4.30pm to 7pm later that day. The next day the Beatles flew on to Adelaide and Melbourne for performances. On Sunday 14 June Ringo Starr arrived in Australia, spending less than two hours in Sydney before catching a connecting flight to Melbourne.

[media]The early 1960s was a time of radical change. The 1962 Cuban missile crisis, which engaged America, Cuba and Russia, threatened to be catastrophic. Conflict in Vietnam had been simmering for years but escalated in the early 1960's with an increased American presence and the embarkation of Australian Army troops in July 1962. From 1962 Indonesia and Malaysia fought a small undeclared war which, in 1963, involved Australian troops. It was a time of suspicion and uncertainty, although Australia was beginning to become an active player on the world stage. 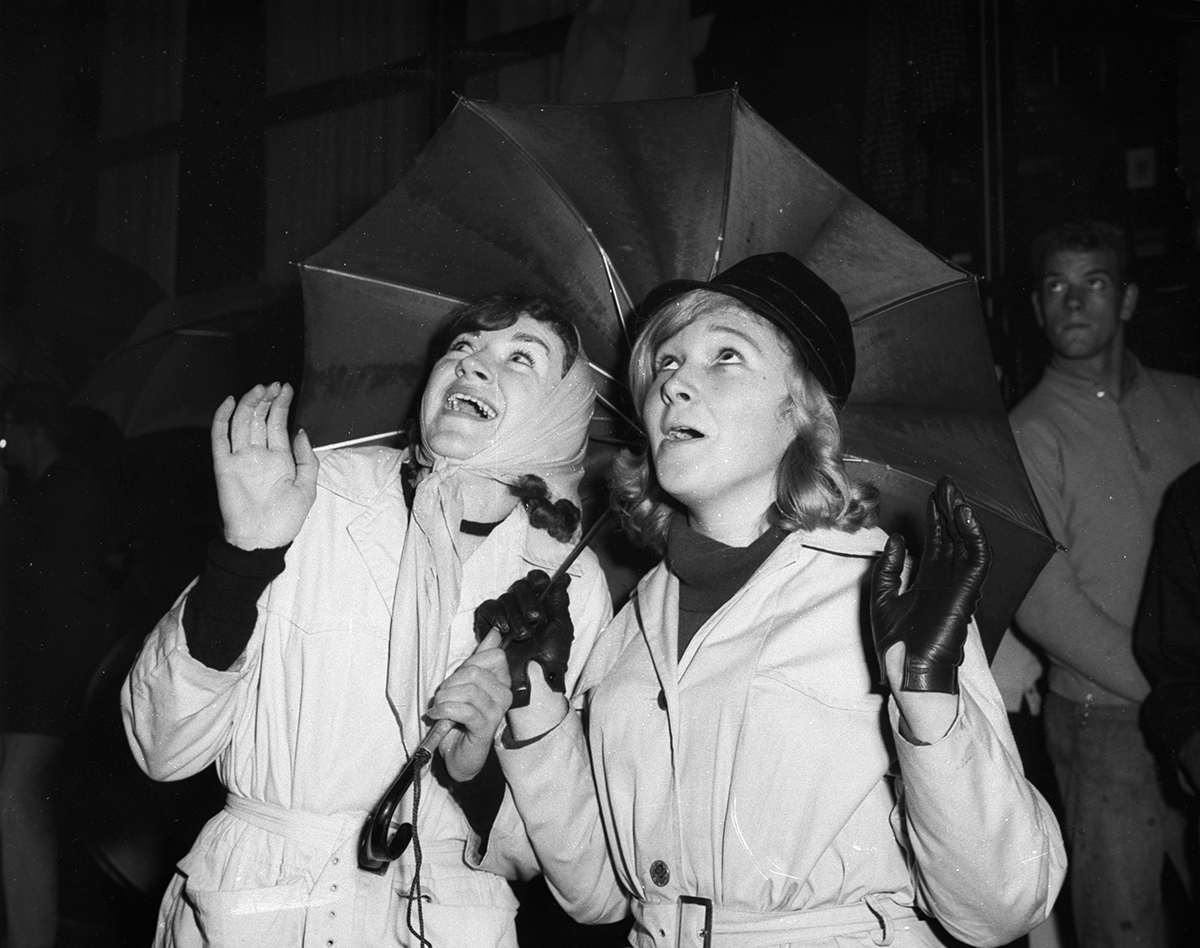 At the same time there was a growing disillusionment with governments and the way societies were operating. A culture of protest was beginning to emerge, especially with young people. This was 'a once in a lifetime celebration of youthful rebellion.' [5] In April, 1964 the editors of Sydney satirical magazine Oz were charged with printing an obscene publication.

During the early 1960s few significant artists would commit to the long journey to Australia. In July 1963 Melbourne promoter Kenn Brodziak secured the Australian Beatles tour for a weekly fee of £1,000 per week ($27,000 dollars today). [6] At that stage they were largely unknown but within six months that had changed dramatically. By the time The Beatles arrived in Australia they were an international hit and could easily demand £25,000 a performance, or $700,000 a show. [7]

[media]The Beatles returned to Sydney on 18 June at 11.40am. Around 3,000 fans greeted them at the airport, and 800 people stationed themselves outside the Chevron Hotel, opposite the Sheraton Hotel where The Beatles were staying. [8] The musicians later gave a press conference for Australian reporters. 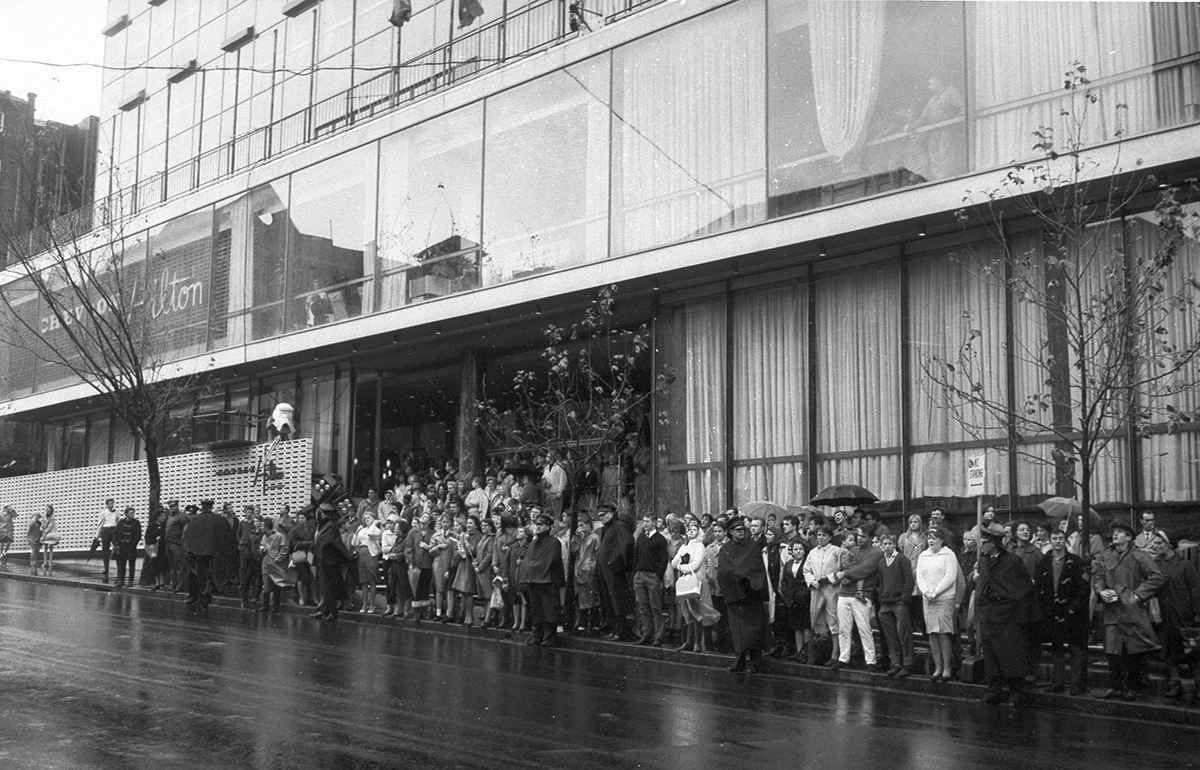 In the evening The Beatles gave the first of six shows over three days at the Sydney Stadium in Rushcutters Bay. Each performance was seen by 12,000 people. As was now customary, The Beatles were subjected to a storm of jelly babies thrown by the fans, the result of an off-the-cuff interview comment made by George Harrison in 1963. [9]

Sydney Stadium was, at that time, the city's only large-capacity concert venue. The Stadium, affectionately known as 'The Tin Shed' had been constructed in the early 1950s as a boxing venue. It stood on the corner of New South Head Road and Neild Avenue, Rushcutters Bay, but was demolished in 1973 to make way for the Eastern Suburbs Railway.

The concerts were a sensation. The Sydney Morning Herald reported

The Beatles showed themselves last night to be every bit as polished, as exciting and engaging in person as they are on their records. [10]

Thousands of girls under sixteen who occupied the most expensive seats seem to be in a state of delirium…laddering stockings and losing their shoes. Many were hurried off to the first aid room, too excited to stand anymore. [11]

That day, 18 June 1964, was McCartney's twenty-second birthday, and after the concert a party was held back at the Sheraton. Also present were 17 girls who had won the Daily Mirror newspaper's 'Why I would like to be a guest at a Beatle's birthday party' competition. [12]

Barbara of North Nowra told Glenn A Baker about her enthusiasm in those heady days.

My whole life revolved around the Beatles, from my haircut down to my boots. My Beatle mug was the only thing I would ever drink my tea out of. I wore Beatle brooches and sweatshirts and kept big scrapbooks full of newspaper clippings.

The day they arrived in Australia I was glued to the TV screen hours before the plane landed. The moment the door opened and they walked out onto the steps, I burst into tears. I did a lot of screaming and crying that week, especially at the concerts. [13]

The Beatles, having flown in from New Zealand, departed Sydney for London at midday on 1 July 1964.

Glenn A Baker. The Beatles Down Under: The 1964 Australia and New Zealand Tour. Glebe: Wild and Woolley, 1982.

[6] The fee was later renegotiated to £1,500 per week, still a remarkable deal