Sydney Theatre Company at The Wharf

It's [media]hard to imagine the Sydney Theatre Company, or indeed Sydney itself, without its harbourside home, The Wharf. In many ways, the venue – an award-winning conversion of a heritage-listed, ironbark timber wharf built to load cargo onto ships – epitomises the big, bold, adventurous creativity and distinctive Sydney glamour of the company it houses. The Wharf has been vitally important to the Sydney Theatre Company's image, success and economic viability, as well as spearheading the development of an arts precinct at Walsh Bay. But it could so easily not have happened. 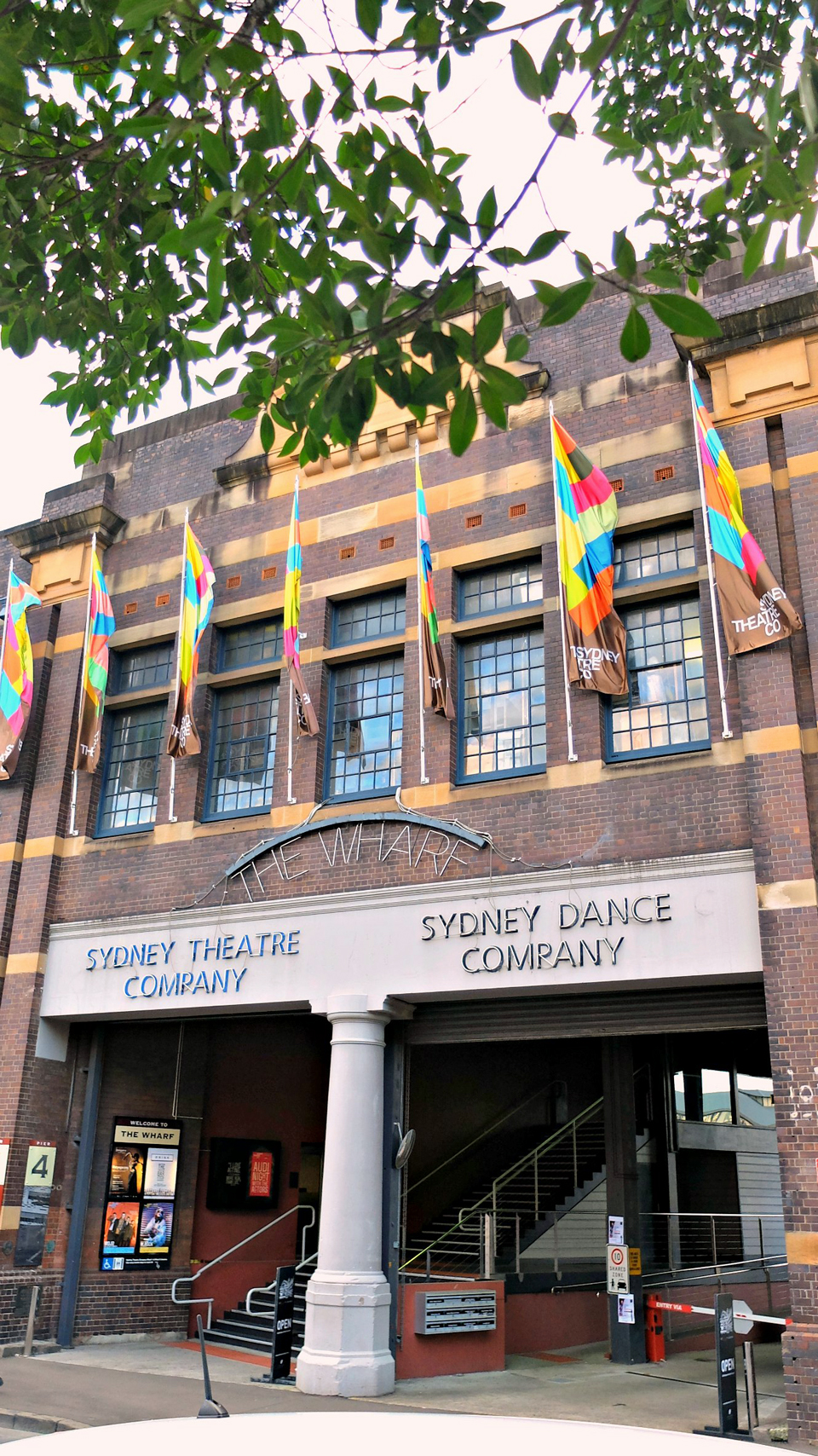 Not another box theatre

When Premier Neville Wran sent the National Institute of Dramatic Art's Elizabeth Butcher out in 1979 to find premises for the newly formed state theatre company, a second venue was not on the cards – though Butcher always kept the idea quietly in the back of her mind. Butcher had set up the Sydney Theatre Company for Wran so that there was a company to perform in the Sydney Opera House Drama Theatre following the demise of the Old Tote in 1978. Now it needed premises where it could consolidate administration, workshops and rehearsal space.

Shown the enormous, two-storey Pier 4/5 wharf at Walsh Bay, Butcher knew immediately that she had found what she was looking for. Standing empty with nothing in it except seagulls, it was clear the building had the space for everything the company needed, including a theatre. Happily, Wran had been in New York not long before where he had seen the reclamation of wharves in lower Manhattan into gymnasiums and tennis courts and immediately recognised its potential:

'What I liked about The Wharf was that it was different. Anybody could have put up another box theatre and it would have served the purpose but The Wharf really made a statement about the theatre and our commitment to that theatre.' [1]

There were objections to investing in bricks and mortar and the Maritime Services Board, who owned the building, was loath to relinquish it; but living up to his nickname of 'Nifty Nev', Wran was determined to make it happen. In her forward to Walking on Water, Sydney Theatre Company at The Wharf, Jill Hickson writes:

'As I recall, Neville said to Gerry Gleeson [the then Secretary and Permanent Head of the NSW Premier's Department], 'Oh! Just tell them that I bloody want it!' or words to that effect.' [2]

What's more, he insisted the Maritime Services Board pay to strengthen the piles on which the Wharf was built. [3]

Finally, in 1983, having seen off three years of bureaucratic obstacles, Wran was able to announce that a budget of $3.5 million for the conversion had been approved. Even then, it was touch and go. At one point, with cost cutting in mind, the government architects recommended that the theatre be built at the road end of the wharf, rather than at the harbour end, as architect Vivian Fraser had designed it. There were also concerns that the public wouldn't want to walk the 200 metres to the theatre. [4]

Fraser and the company's first artistic director, Richard Wherrett, were appalled: 'I felt that we owed the public the spectacular beauty of the harbour end, and that once they got there, they would appreciate it,' wrote Wherrett in his memoirs, The Floor of Heaven. [5] Wherrett was also quoted as saying: 'I liked the metaphorical notion that every time you went into the place to see a play, you went on some kind of journey.' [6] Nearly 30 years on, the sense of anticipation that you feel as you walk down The Wharf is still palpable, while pithy messages on blackboards placed along the walkway provoke and amuse.

The Wharf was handed over to the Sydney Theatre Company on 13 December 1984. Standing on the 'eagle's nest' that overlooks the foyer, grand dame of the theatre, Ruth Cracknell, read playwright David Williamson's specially commissioned, Ode to the Wharf, and Wran declared the building officially open. [7]

When it opened its doors in January 1985, Fraser's sensitive renovation, with its respect for the past and embrace of the modern sitting happily side-by-side, won universal acclaim from the media and public alike and was awarded the 1985 Sir John Sulman Medal by the Royal Australian Institute of Architects (NSW Chapter).

Fraser had been appointed by the Government Architects Office as the designing architect largely because of his renovation of the old salt factory in Belvoir Street for Nimrod Theatre Company – now Belvoir St Theatre. His design for The Wharf had an industrial logic to it. Materials entered the building at the Hickson Road end and gradually made their way from the workshop through the paint shop along the building to the stage, with the administration in offices next to the theatre.

As for the actual theatre, Fraser designed a flexible space with a system of moving the seating banks hydraulically. To ensure good sight lines, the seating had to be steeply raked, which some actors found fairly confronting in the early days. There is a story that Judy Davis went down on her knees to General Manager, Donald McDonald, to ask that the stage be raised for Hedda Gabler in 1986 to counteract this.

Harbouring the hope of a second, smaller theatre at The Wharf, Wherrett got Fraser to sound proof and air condition one of the three rehearsal rooms, paving the way for it to be turned into Wharf 2 later on.

Articulating his vision for the company, Richard Wherrett, who was artistic director from 1979 to 1990 (and died in 2001), said that he wanted to provide:

…first-class theatrical entertainment for the people of Sydney – theatre that is grand, vulgar, intelligent, challenging and fun. That entertainment should reflect the society in which we live, providing a point of focus, a frame of reference by which we come to understand our place in the world as individuals, as a community and as a nation. [8]

Over the ensuing four artistic directorships – Wayne Harrison from 1990–99, Robyn Nevin from 1999–2007, Cate Blanchett and Andrew Upton from 2008–12 and Upton from 2013, the company has evolved, grown and shifted shape but Wherrett's mission statement remains a vital part of the Sydney Theatre Company's DNA.

The sweeping ambition of the Sydney Theatre Company, which would differentiate it from other Sydney theatre companies, was established early with productions like Cyrano de Bergerac in 1980 featuring a cast of 22 led by John Bell, Richard Wherrett's 1981 production of the musical Chicago, which later toured to the Hong Kong Festival, and The Life and Adventures of Nicholas Nickleby in 1983, which ran for over eight hours in two parts with a cast of 36.

Under Harrison, the company expanded rapidly, staging as many as 18 shows in one year. Working with a broad definition of theatre that could embrace everything from the premiere of the testosterone-powered tap show, Tap Dogs, to Shakespeare staged under Elizabethan conditions, Harrison pushed the company to its busiest and most commercial. By 1995, the Sydney Theatre Company was the largest theatre company in Australia with a subscription base and a diversity of programming second to none.

Nevin was more interested in running 'a fine drama company.' [9] Central to her vision was the establishment of a full-time ensemble of actors within the company, which she achieved in 2006 with the formation of the STC Actors Company.

The Sydney Theatre Company continues to offer audiences an eclectic program of Australian writing, interpretations of the classic repertoire and the best of new international writing. It now presents work across three venues – The Wharf (with its two theatres), the Sydney Theatre (which opened in 2004) and the Drama Theatre at the Sydney Opera House – but The Wharf remains at the heart of its operations. Underpinning all the mainstream work has been a series of evolving experimental, developmental and education projects.

In 2008, Fraser and the NSW Government Architect's Office were awarded the Royal Australian Institute of Architects 25 Year Award for Enduring Architecture, with the jury citation concluding: 'The Wharf remains an essential community and tourist facility after more than two decades of continuous, robust use.' [10]

Today, the spectacularly located theatre is also an inspirational example of environmental leadership. Blanchett's and Upton's 'Greening the Wharf' project – which introduced Australia's second largest rooftop solar array, rainwater harvesting and energy efficiency measures to the building – has a scale and comprehensive approach to environmental sustainability that makes it a world first for any major theatre company globally.

Richard Wherrett, The Floor of Heaven: My Life in Theatre, Hodder Headline Australia, 2000