The Museum of Contemporary Art Australia

Sydney Harbour [media]has many moods. I always think it is glorious, whether blue and sunlit or grey-green and moody. From 1994 to 1996, I saw the harbour in all its tempers from my office at the Museum of Contemporary Art, just across Circular Quay from the Sydney Opera House. The harbour is a daily spectacle and watching it was an adventure: checking activity on its busy waterways, the regular passage of little ferries as much as the arrival of great vessels at the Overseas Passenger Terminal; seeing abrupt transformations wrought by the weather; hearing slapping waves and hooting sirens carried across the water. On one unforgettable afternoon, the vast sails of the Opera House flushed palest pearly pink with the setting sun. The harbour is the true beauty of the city. 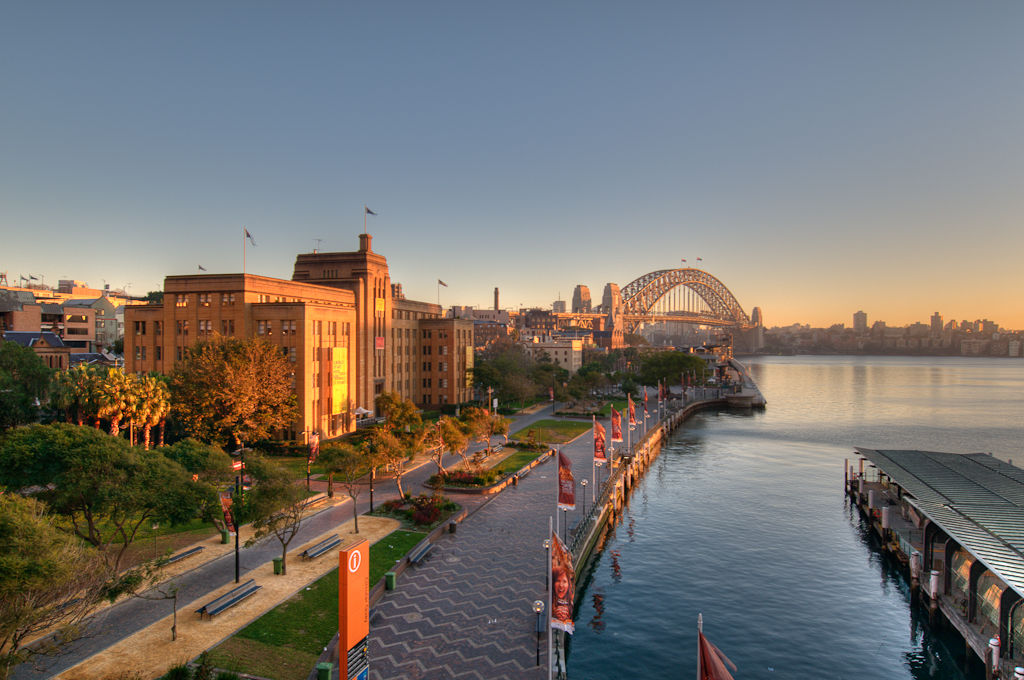 [media]All of us working at the Museum of Contemporary Art felt keenly the privilege of our location, not just its fabulous beauty but its great historical significance. The museum opened in 1991 in the massive stone headquarters of the old Maritime Services Board , one of the more inspired civic decisions of recent decades. [1] It is a deliciously pungent reuse of the building and occupation of the site, replete with ironies. For Sydney Cove is, of all historically burdened locations in colonised Australia, the most inflected. It is the foundational location of the Australian national narrative, perhaps the most archeologically significant location in European Australia, now comprehensively assessed and excavated, [2] literally a stone's throw away from Cadman's Cottage, dated 1816, the city's oldest domestic building. 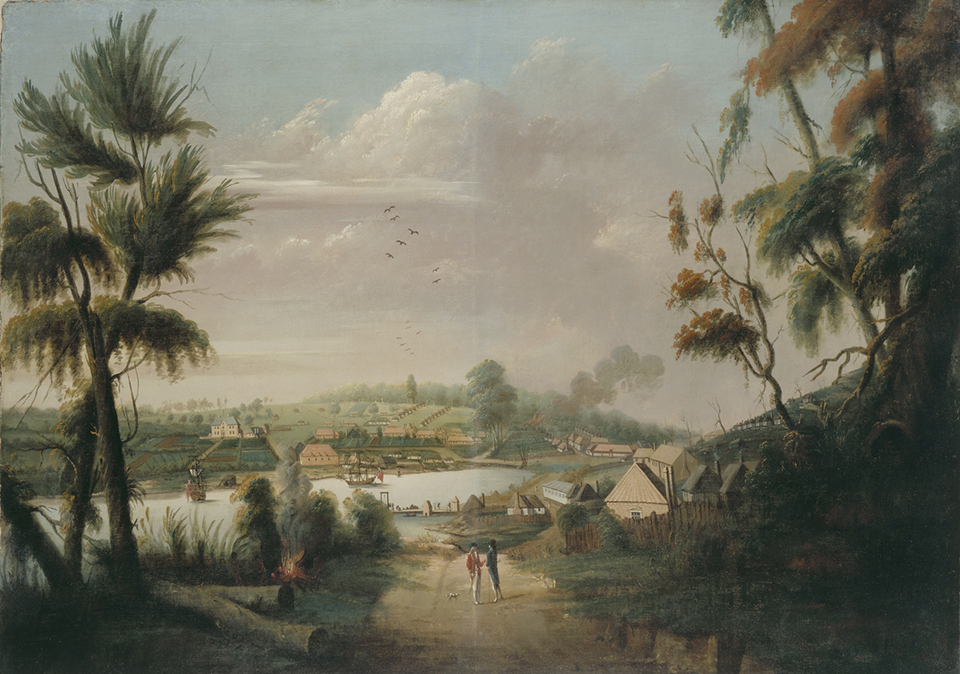 This very spot where the MCA now stands, once home of the Gadigal people of the Eora nation, became the landing place of the British First Fleet in January 1788. Two hundred years later, the maritime industry of the harbour has been displaced by Sydney's booming tourist trade and the site is now home to the first major museum in the country dedicated to 'the most recent contemporary art of the world', to quote John Power, the artist who originally endowed it. [3] It's a brilliant juxtaposition: the art of today confronts the ghosts of the colonial past. On a daily basis.

In those early days of the Museum of Contemporary Art in the 1990s, the implied impertinence of inserting contemporary experimental art into this hallowed setting was constantly discussed within the museum. We were all acutely aware of these resonances, this responsibility. The MCA's staff worked with missionary zeal to anchor its place within the city, to make a program that became part of Sydney's life. We explored alliances with neighbours, like the new Museum of Sydney on the Site of First Government House, five minutes' walk away across Sydney Cove on Bridge Street, which was grappling with equally complex tensions between past and present; we staged lectures that aired contentious topics that were published in The Australian the next day — the young Barrie Kosky memorably tore into Australia's provincial aspirations to being 'world class' [4]; and we made sure the museum addressed issues of broad civic concern, such as the planning of Circular Quay itself — in 1995 architect Richard Le Plastrier delivered the first Lloyd Rees Memorial Lecture with a paean to the harbour that was a revelation to Sydneysiders who thought we already knew it all. [5]

At this time in Sydney, crucial patterns for the future were being laid down – whether seducing international tourists or welcoming school kids from Western Sydney to education programs at the MCA —the intoxicating mix of slick allure and gritty substance that the museum wrestled with then seems emblematic of the harbour city.

[media]Of all the projects at the museum in those years, Jeff Koons' Puppy takes the biscuit. Simultaneously sublime and silly, the monumental flowered terrier was a deliberate imposition of the contemporary on the Art Deco solemnity of the building. At 12.4 metres, the perky Puppy dwarfed the MCA's sandstone bulk and thumbed its nose at the more serious ambitions of traditional sculpture. Covered with growing flowers, including a liberal sprinkling of insouciant petunias, the compact cuddly form of the little dog, ridiculously amplified, was at once cute and pompous, substantial and ephemeral — its season was a short four months. A folly (but a triumph, after the brilliant work of the MCA and its expert engineering teams), Puppy took Pop Art to the max. That summer, Sydney and its visitors adored it. All sorts of people came for a look, with some exquisite conjunctions: one day a group of suited business types heard small boy calling 'Look! Puppy is peeing!' (The watering system was in action.) The museum had found a mascot. 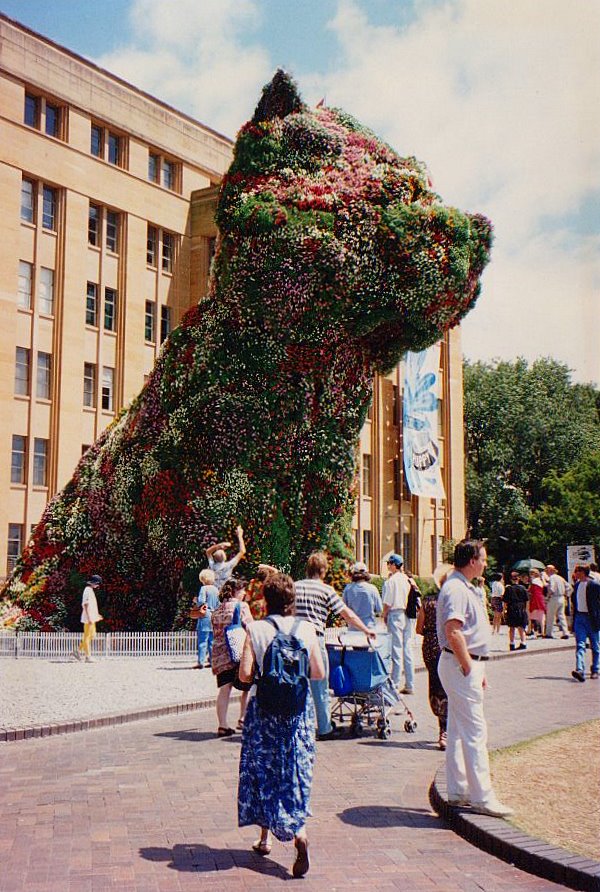 Puppy was the turning point for the Museum of Contemporary Art and its mission to bring contemporary art to the city, the moment when Sydney saw that the living dreams of present-day artists were part of its busy being. Significantly, Puppy was a project of John Kaldor, who had brought Christo and Jeanne-Claude's Wrapped Coast to Sydney's Little Bay in the summer of 1968–69. [6] That the floral canine tribute stood on the shores of the harbour in 1995 was crucial to its success: Sydney Cove is a grand open amphitheatre, the most important public space in the city. It is replete with Sydney's icons — the Harbour Bridge, the Opera House, the Manly ferries, even sun sparkling on water. It might have been devised for a single camera shot – Sydney Cove is where the New Year's Eve fireworks takes the city to global television audiences each year. [7] Puppy was a key player in this unfolding narrative, and is now, part of the story of Sydney Cove.

One tiny incident with Puppy over the summer of 1995–96 recalled Sydney's older larrikin spirit. I arrived back at the museum after a holiday to find the attendants humming with delight: one illicit plant, of a type probably never before cultivated in Sydney Cove, had been detected sprouting from Puppy's forehead. Weedy but unmistakable, it sprang proud and irreverent. Jeff Koons was duly consulted, the offending plant was removed with the aid of a huge cherrypicker, and museological crisis and design deviation were averted. But it was a sign, however comic and juvenile and minute, of the unsquashable possibility of impudence, even dissidence. Right there on the hallowed shores of Sydney Cove, ready to prick any aspirations, whether historical or contemporary, at any time.

[2] For information on the extensive archaeological research undertaken in the area, see Grace Karskens, Inside The Rocks: The Archaeology of a Neighbourhood, Hale and​ Iremonger, Sydney, 1999; 'The Big Dig', The Big Dig Archaeology Education Centre Youth Hostels Australia website, http://www.thebigdig.com.au/history/

[4] See Elisabeth Wynhausen and Jody Scott, 'Eye of the storm: Responses to Barrie Kosky's claim that Australian artists are obsessed with being world class', The Australian, 16–17 November 1996, p 27

[5] Leon Paroissien, who was the Museum of Contemporary Arts' Founding Director, in partnership with Chief Curator Bernice Murphy, has an special interest in urban planning