[media]In Sydney there was once the 'Troc', the site of dances, charity functions, debutante balls, receptions, gala parties, radio broadcasts and pageants. On Friday and Saturday nights, it was 'dance central'. 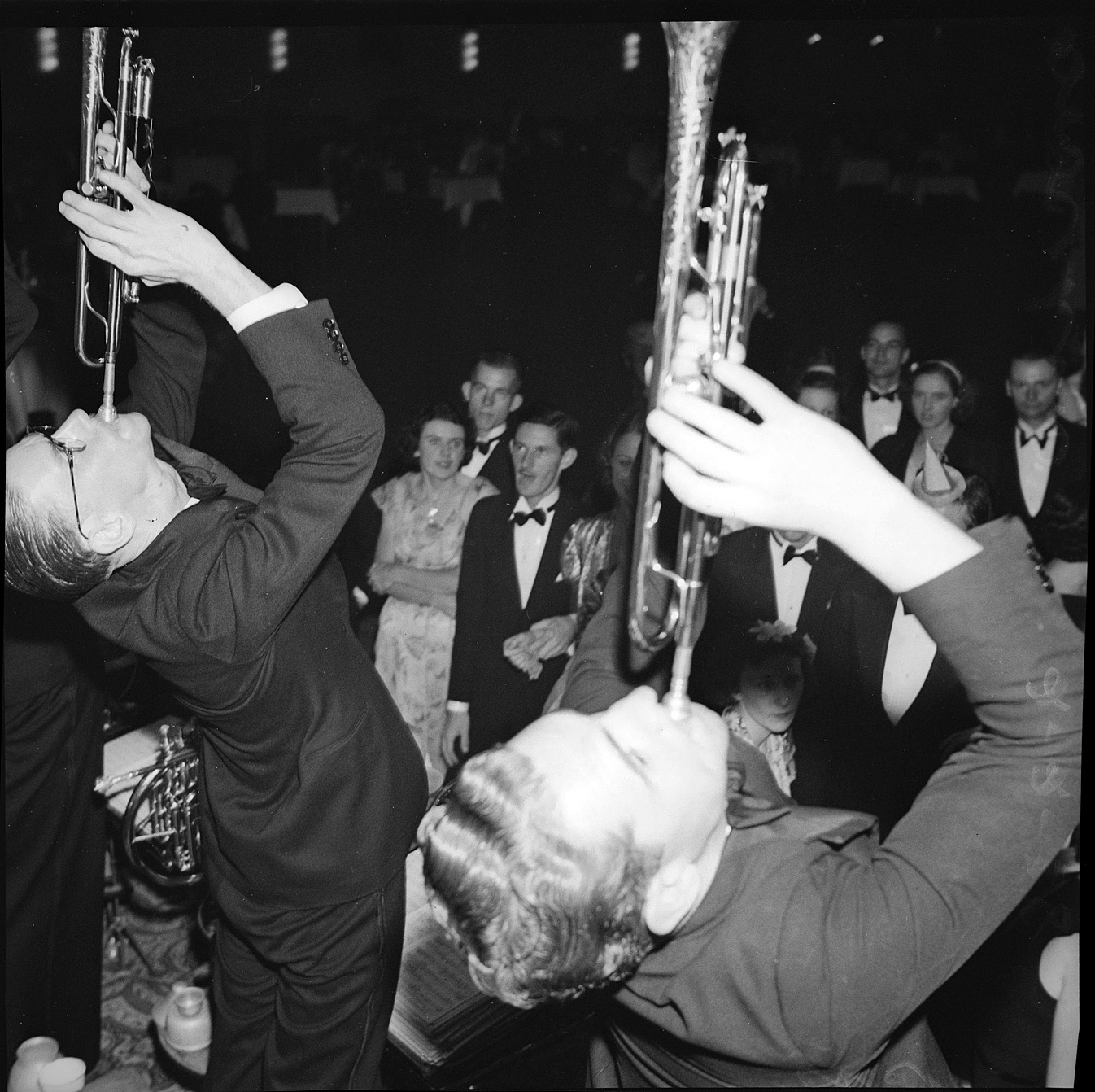 Those who graced its interior included queens, a Queen and other royalty including princes and princesses, sundry governors, field marshals, presidents, radio and television personalities, actors and actresses, and the grand dames of Sydney society. There were also average Sydneysiders who were addicted to whichever dance was fashionable.

This was the Trocadero, affectionately known as the 'Troc', once the most glamorous palais de dance in Sydney. It was situated on the western side of George Street, south of Bathurst Street.

The Trocadero opened on 3 April 1936, at a time of flux and uncertainty. The Great Depression still cast a pall over life, even though the worst effects were over. But there was widespread unrest around the world. In Asia, rebellion was in the air. In Europe, there was the ongoing rise of Fascism, and the flexing of Soviet power, with the proxy war between these two forces being waged in Spain. The New Deal was taking the USA back into gradual prosperity.

In Australia, recovery from the Depression was slow, due in part to ongoing drought, a devastating rabbit plague, and fears for the future.

But the Trocadero represented hope, embodying the glamour of Hollywood. It was the day of Ginger Rogers and Fred Astaire, and their dance numbers in popular Hollywood movies such as Top Hat, Follow the Fleet, The Gay Divorcee, and Flying Down to Rio. The Troc was the epitome of modernism. It was designed by the architects Robertson and Marks, in the Art Deco style. The entrepreneur Jim Bendrodt, who oversaw its creation, advertised it as a 'large Palais /Restaurant'.

[media]Built at a cost of £150,000, its furnishings included scarlet carpet covered with a pattern of fleurs-de-lis, picked out in cream, gold and black. This covered the foyer, the three sides of the auditorium around the dance floor, and also the bandstand stage floor. Flanking the three sides of the auditorium were Art Deco bas-relief murals depicting renowned dancers of all nations. The bandstand was described by the Sydney Morning Herald as 'shell shaped and with coloured lights presenting a constantly changing scene'. There was enough seating for 2,000 people. 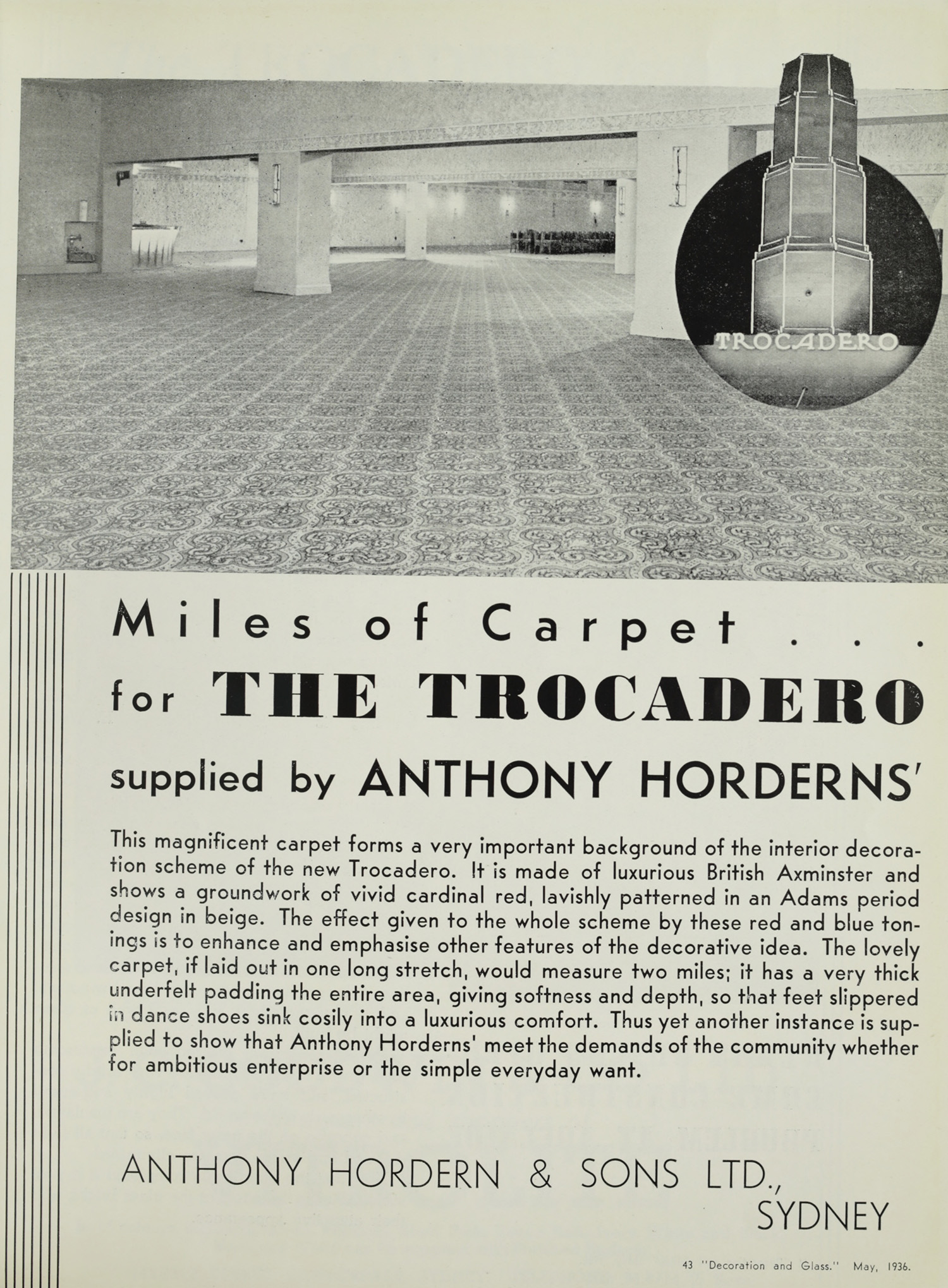 Its street facade was striking. Above the entrance rose a floodlit tower of Hawkesbury River sandstone. The entrance vestibule had marble floors and walls of polished granite. There was a decorated awning of black and green stainless steel strips. The Sydney Morning Herald described the opening on 3 April as a 'gay premiere'. It became a household name for a city recovering from the Depression.

The late 1930s was, in so many ways, such a different era. Dressing up and going out dancing was a favourite pastime, and Sydney was fortunate in having such a place as the Troc. People didn't have to go to the smart nightclubs, like Romano's in York Street, just to have a good night out.

Broadcasting networks and, since the advent of the talkies, the film industry, provided an outlet for all types of music. The ABC broadcast live from the Troc every Monday and Thursday, and the dapper trombonist Frank Coughlan was the band leader for most of the Troc's 35 years. In its early days, it was sensitive about its classy reputation and, reportedly, one could get thrown out for calling it a 'dance hall'. Rather, it was to be known as a Palais de dance.

During World War II, the Troc became a haven for American servicemen in Sydney, and this increased the demand for the latest in swing and jazz. Some big names such as Artie Shaw and his American Navy Band appeared at the Troc in 1943, for a series of concerts for US servicemen only.

There were often fights in the Troc between Australian and US soldiers. It was reported that, as soon as the fighting broke out, the band would loudly play 'Stars and Stripes Forever', until the police arrived. 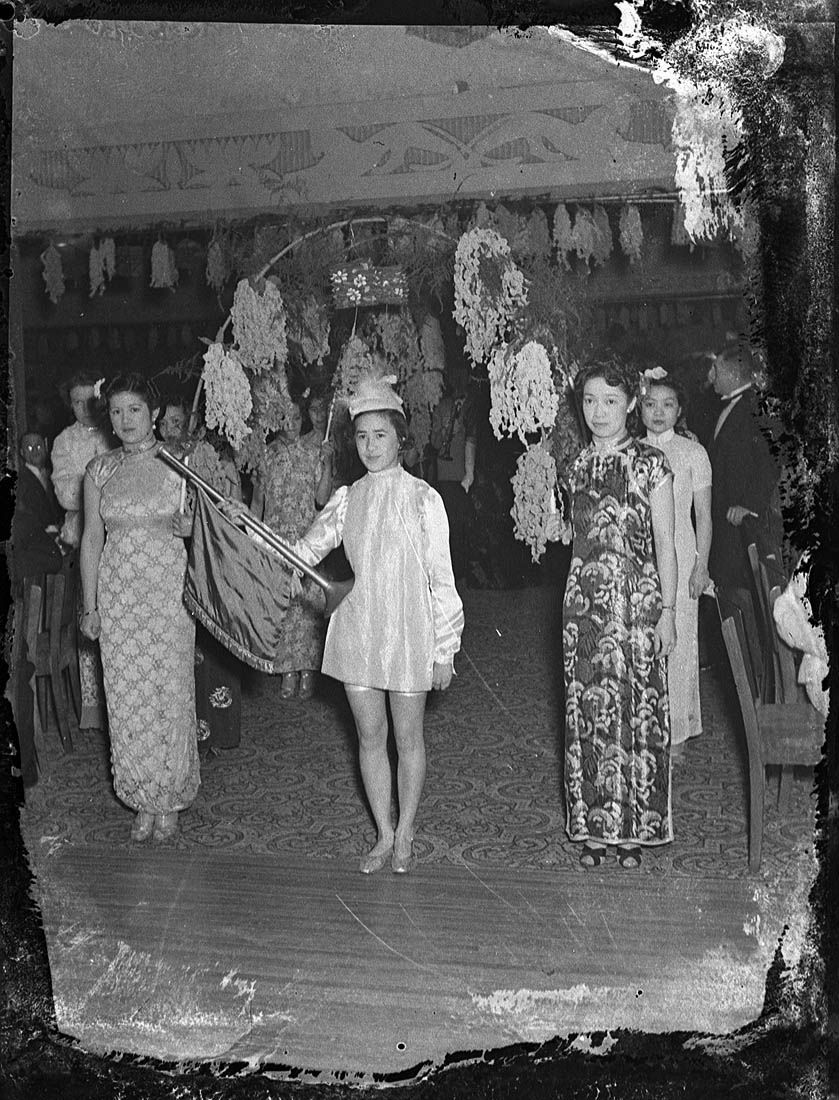 The annual Black and White Ball, arguably Sydney's most famous event for the city's A-listers in the postwar decades, was held there. Various trade exhibitions and fashion shows, and the early Miss Australia finals were also staged at the Troc.

Some more rambunctious events occurred at the venue. The Sydney University student balls generated much angst and broken glassware, as the students tended to let loose. On one occasion, fire extinguishers were needed to put out blazing decorations set alight by some over-enthusiastic revellers. But according to the newspapers, 'the band just played on' .

[media]Perhaps more outrageous were the annual Artists' Balls, which drew artists and their models and much of Sydney's bohemia, including many cross-dressers. The citizens of Sydney were not used to the sight of men dressed as women and women dressed as men on the streets. This was a more straitlaced time and the appearance of a dozen men dressed as Carmen Miranda, a Hollywood star of the time more admired for her vivacity and headwear than for her acting talent, caused newspaper editorials to foretell the downfall of western civilization in the metropolis. 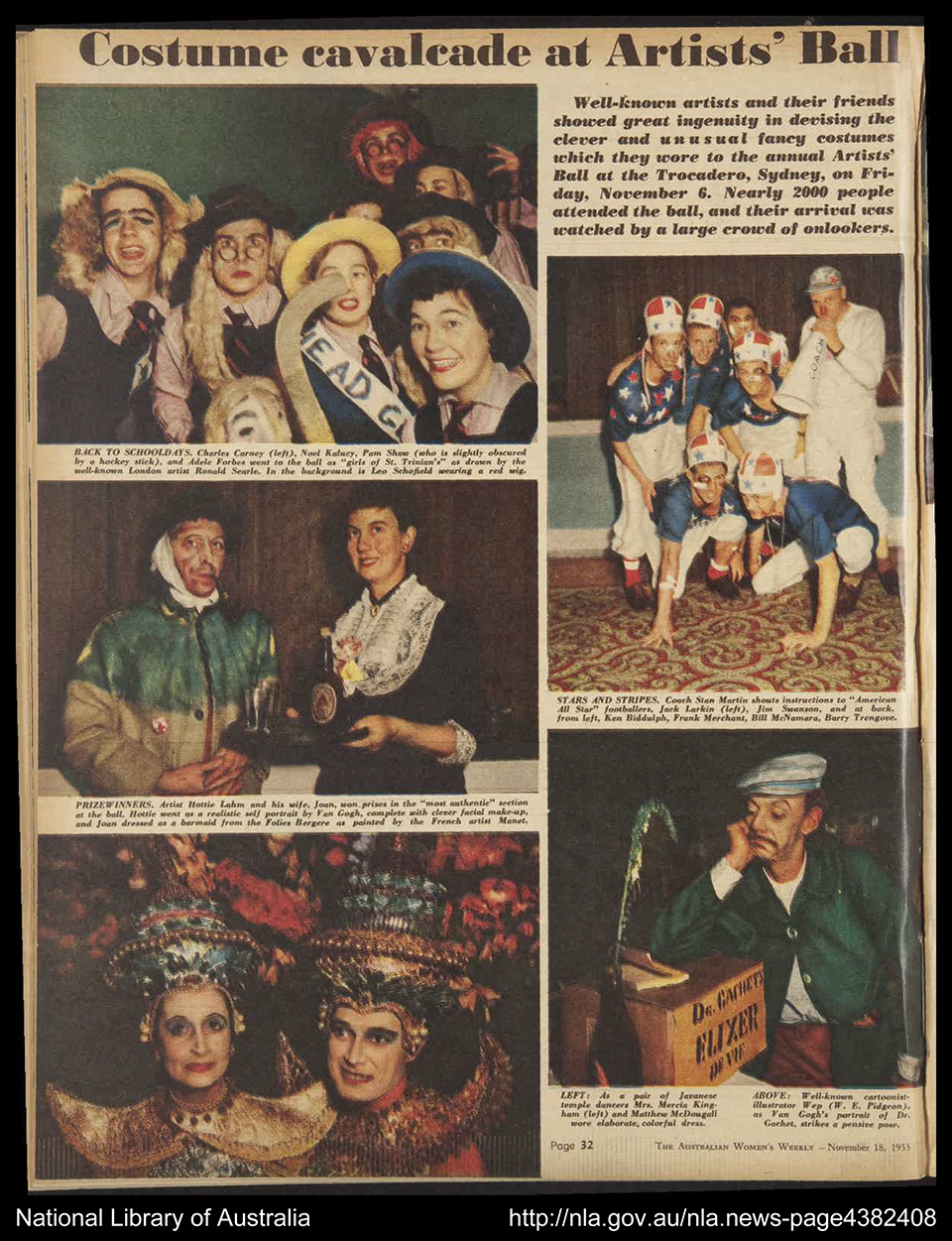 Some of these cross-dressers became part of Sydney's legends. One year, an enterprising ball-goer, dressed as a tram conductress, not only travelled along George Street by tram to the Troc, but also collected fares along the way. No doubt that extra cash helped her night along. Other famous appearances at the Troc included drag queens arriving in pantechnicons (giant removalist vans) because their frocks and hairstyles were too large to be transported any other way. The RSPCA was called in once, when a reveller wore as a headdress a bird's nest with a live chicken strapped in.

By mid-century the Troc started to see its most distinguished guests. While earlier visitors included the Duchess of Gloucester in 1945 (when the Duke was Governor-General) and Field Marshal Viscount Montgomery of Alamein in 1947, in 1954 a luncheon for the Queen, during her first visit to Australia, was held at the Troc. Other distinguished guests of honour over the years included Queen Elizabeth the Queen Mother in 1958, and Princess Alexandra, who danced the night away in 1959 at the Golden Ball, a fundraiser for the Royal NSW Institute of Deaf and Blind Children. For this event, as a centrepiece of the decorations, a huge gold silk canopy was suspended from the ceiling. Later honoured guests included United States President Lyndon B Johnson and Prince Charles.

The impact of rock and roll

[media]The Troc started out as a swing and jazz palace, but by the mid-1950s the leading dances were the quickstep, the foxtrot, the waltz and the tango. Crooners were in fashion. Then later came the samba. But for band leader Frank Coughlan, the rot set in during the 'shifty fifties', with the advent of rock and roll. 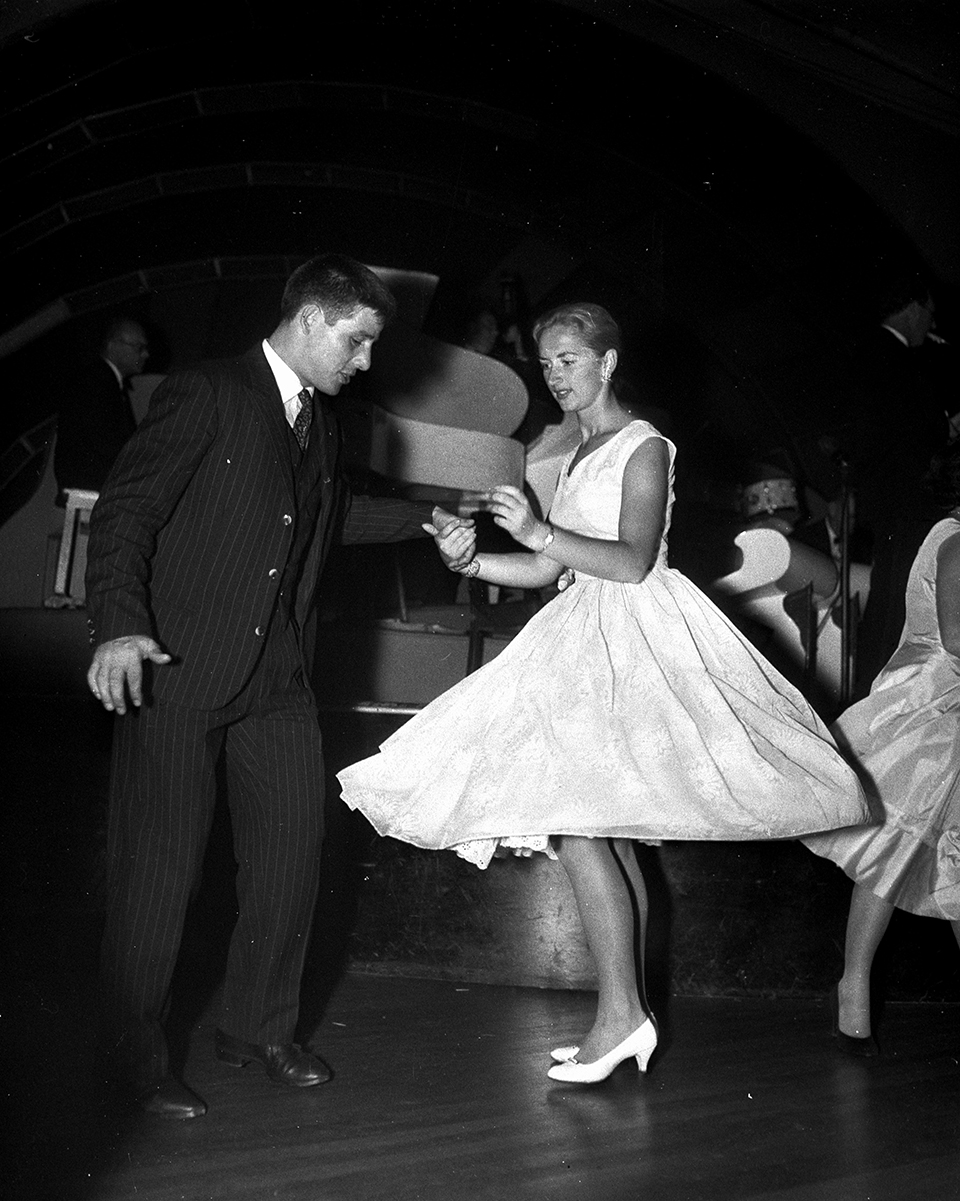 By the late 1960s, with the counterculture in full swing, and rock and roll ruling the airwaves, the days of the big bands and swing were passing. Crowds fell away as a new music and dance culture emerged, enjoyed at places like French's Tavern, the Oxford Tavern, or the Unicorn on Oxford Street. At Surf City in Kings Cross, acts such as Radio Birdman, Billy Thorpe and the Aztecs, and folk singers Jeannie Lewis and Margaret Roadknight were part of this new culture.

During its 35 years of life, over one million pairs of feet danced at the Troc. It finally closed its doors on 5 February 1971, and was eventually demolished to make way for the new Hoyts Theatre complex.

More than 30 years later, its demise is still lamented by people who remember the good times. Indeed, 15 years after it closed, a 'New Trocadero' opened on Military Road in Cremorne, trading on the reputation of that old palais de dance, and leading a revival in ballroom dancing. In 2008 there is a Trocadero Dance Centre on Burwood Road at Concord.