To the Editor of the Australian.

SIR, On the decease of almost all persons, dying in the public hospitals (I speak particularly of one) I have been galled to the heart to see (and to hear also) them borne to their last home by those unhappy (say nothing of degraded) being, who were shackled with iron manacles, known by the more common and op- probrious name of "the gaol gang;" and whose solitary procession gave an impression to the mind, that the deceased fell into his tomb by an act of his own hand, and that none of his fellow mortals would deign to recognise him even as an associate or friend. Now Sir, I put it frankly and fairly to the public, through the medium of your Journal, whether the remains of all deceased persons should thus be transmitted to their last abode or no ? , And, I feel the more on the subject under notice, because it has come to my know- ledge, that such degradation has associated itself with some highly esteemed and meritorious British officers whose misfortunes (not criminally so) had conducted them to the above melancholy receptacle, from whence they made their final exit! While I am upon dead subjects, I will just allude to the disgraceful state of Parramatta burial ground, which has been for many years left exposed to the entering of cattle, dogs, pigs, &c. &c. and although, there is now a brick wall being under very slow pro- gress (something like Sydney new goal) the sacred depository is, as yet altogether unprotected, and ex- posed to every foot that may be inclined to enter. If the above subjects meet with your approval for a corner in your Journal, by inserting them you will oblige your's, respectfully, PHILOMATH. Published 30 December 1824, p2 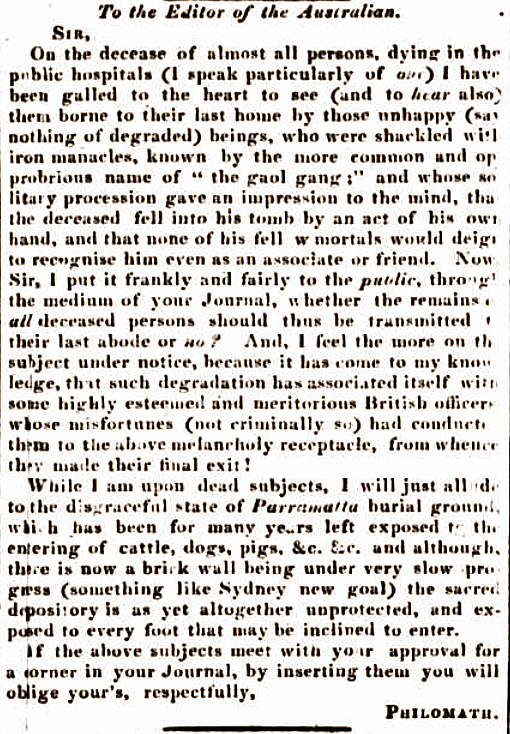