[media]Christmas decorations, including native flora, Christmas trees, tinsel, baubles and illuminations, have been used to decorate Sydney's streets and buildings since the late nineteenth century. The decorations were one way to encourage Sydneysiders to visit the shops in the centre of the city for their Christmas shopping, particularly from the early twentieth century onwards, and were also used to inspire charity. In the twentieth century, Christmas trees have been a focus of activity, both charitable and celebratory. The installation of the Christmas tree in Martin Place is, however, a relatively recent tradition, that began after Martin Place was closed to cars and converted to a pedestrian-only space in 1971. 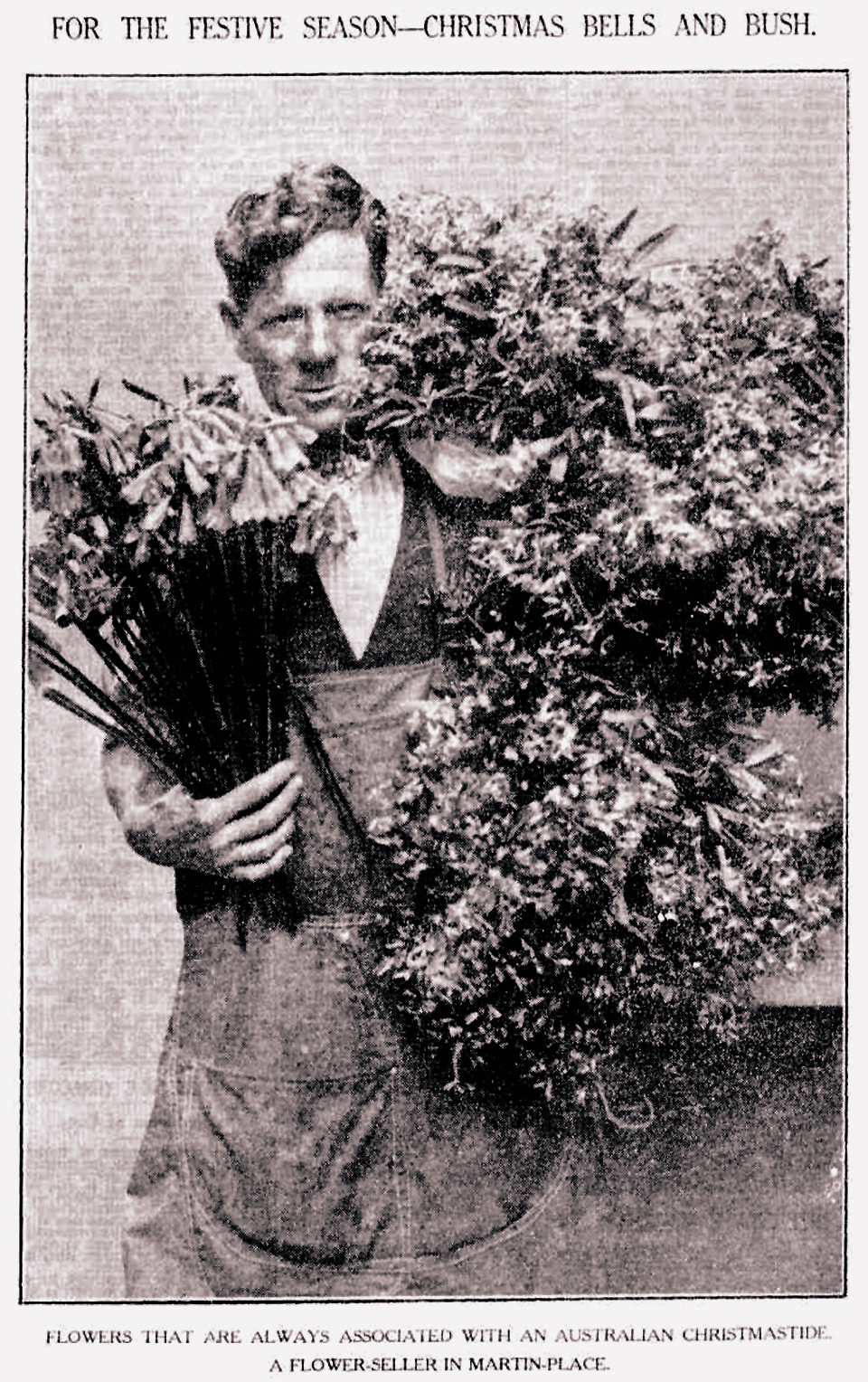 [media]The precursor to the Christmas tree in Martin Place was the charity Christmas tree which was associated with the annual Carols by Candlelight celebrations and stood in Hyde Park near the ANZAC War Memorial. The first Carols by Candlelight, in 1946, was organised by radio station 2UW and newspapers The Daily Telegraph and Sunday Telegraph to raise funds for the Rachel Forster Hospital for Women and Children in Redfern. [1] 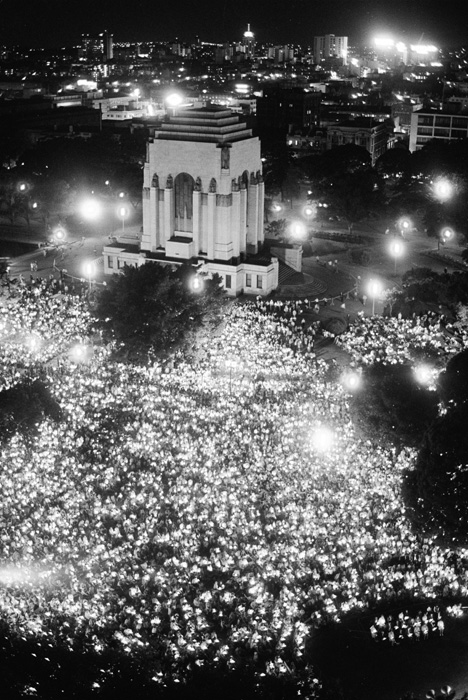 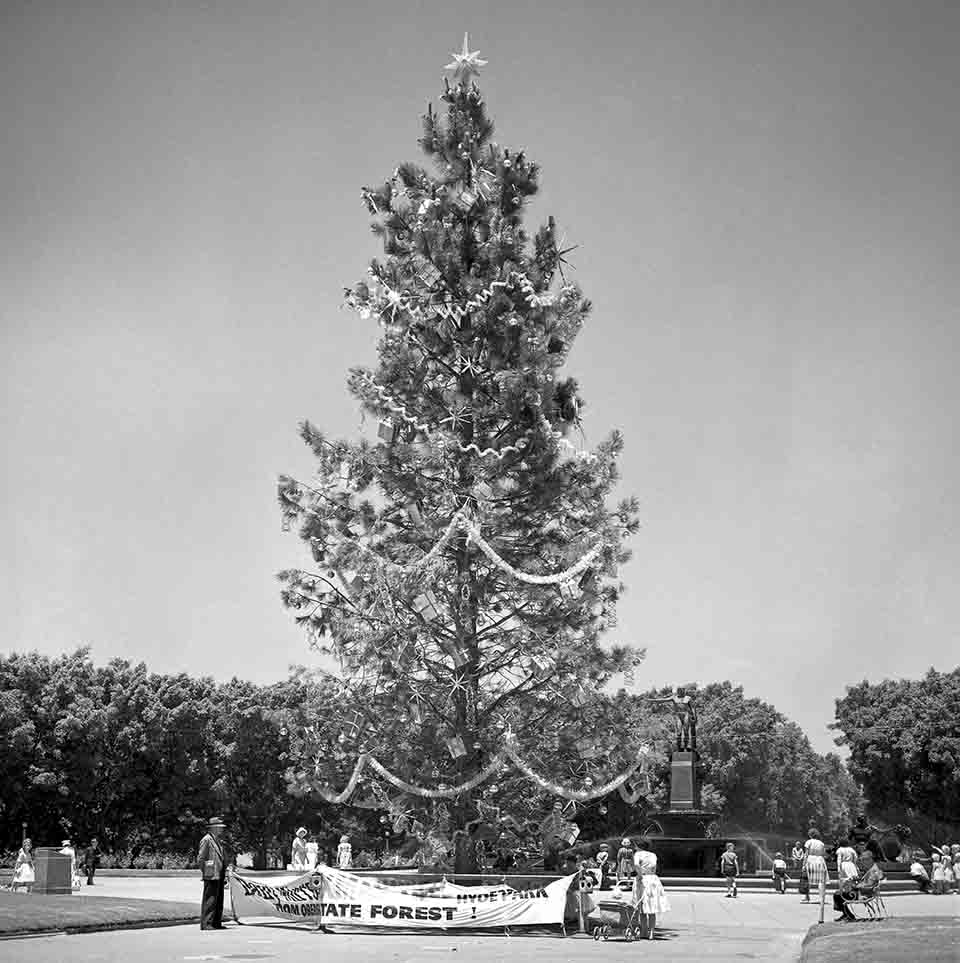 The Christmas tree in Martin Place

[media]In the early twentieth century, Martin Place, like other Sydney streets, was decked out with Christmas bush and Christmas bells, as The Sydney Morning Herald reported in 1911: 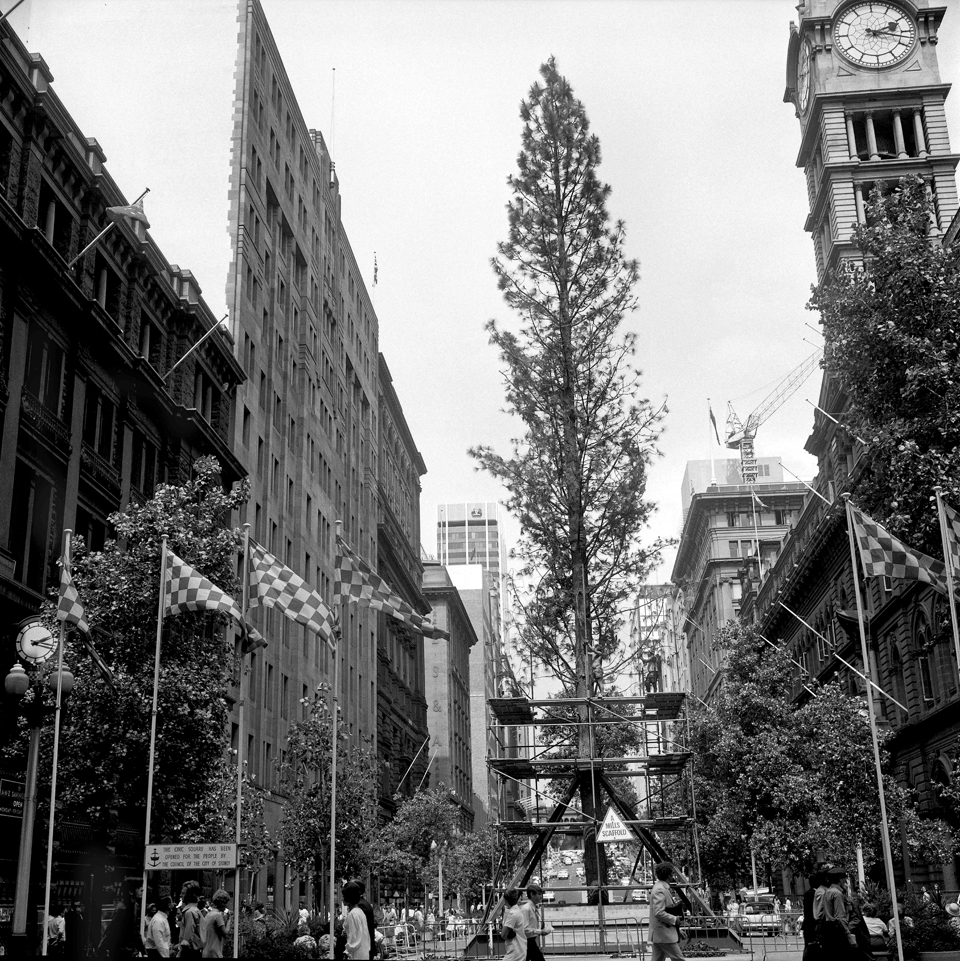 In Sydney the Christmas Bush and Christmas Bells usher in the season when every charitable institution and every benevolent individual seeks to make glad the heart of those upon whom fortune has not smiled too graciously … Martin-place will again be gay with Christmas bush and Christmas bells, the Australian emblems of Christmastide. [3]

[media]However, it was not until December 1971 that a Christmas tree was installed in Martin Place, just three months after motor traffic had been removed and it had been transformed into a pedestrian 'plaza.' [4] 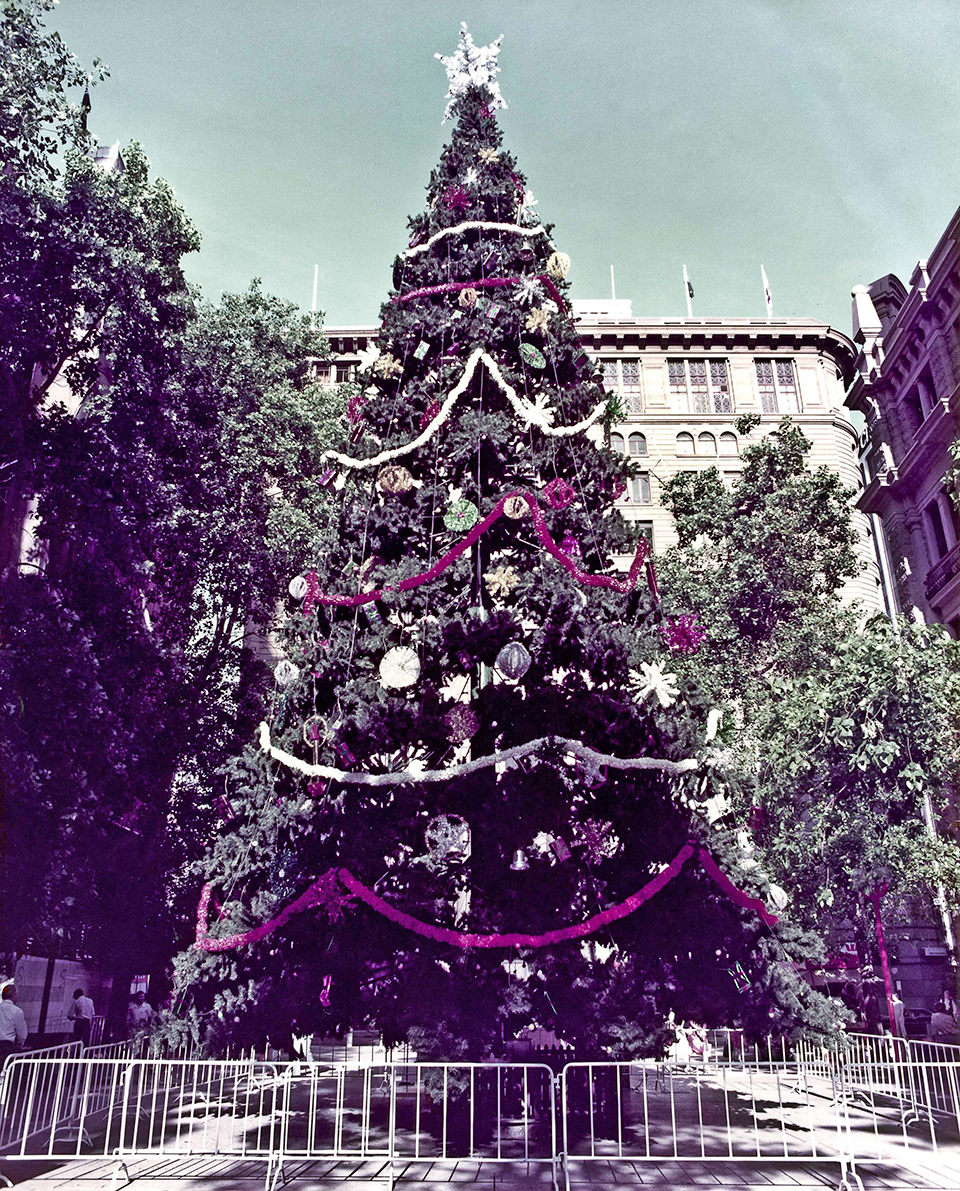 Each year, the trees were sponsored by various commercial organisations. In 1972 the Martin Place Christmas tree was sponsored by Coca Cola.

[media]From 1971 through to 1975, the Christmas trees were real. The specimens, various species of Pinus, were acquired through the NSW Forestry Commission, usually from one of the state forests near Lithgow. The trees were transported to Sydney 'at great expense and erected in a specially designed base and appropriately decorated.' However, real trees presented certain problems, because they browned and dropped needles soon after installation. Council also received complaints from conservationists about their use. So, in 1976, Sydney City Council approved the construction of a 20.1 metre tall artificial Christmas tree. It was decided to install it in the same section of Martin Place as previously because there was a base power supply (for the decorative lights) and a substantial below-ground concrete base that would support the tree. [5] 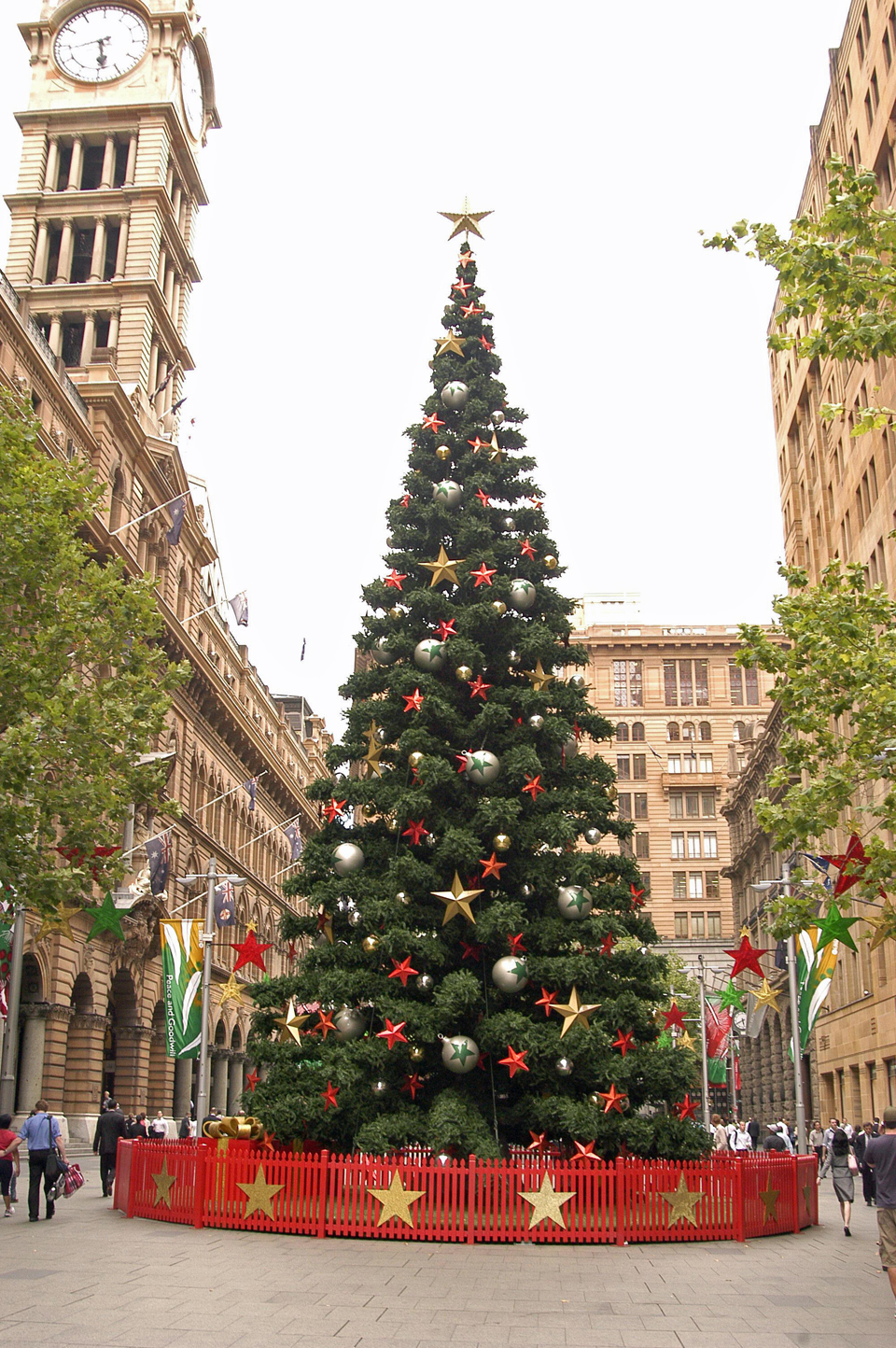 A replacement tree was purchased from Sydney Harbour Casino sometime before 2000. In that year, the Martin Place Christmas tree, standing at 33 metres tall, was claimed to be largest in the Southern Hemisphere. It was draped in nine kilometres of lights, and took 10 days to assemble. [6]

The Christmas tree continues to occupy this section of Martin Place, every year.