Kate Leigh [media]was known to many Sydneysiders as 'the Sly-Grog Queen.' During her long life she received 107 criminal convictions and served 13 gaol terms. Despite this notable criminal record, her reputation oscillated between being labelled 'the worst woman in Sydney' to a perception of her as a benevolent sly-grog seller and for many, community hero and matriarch. 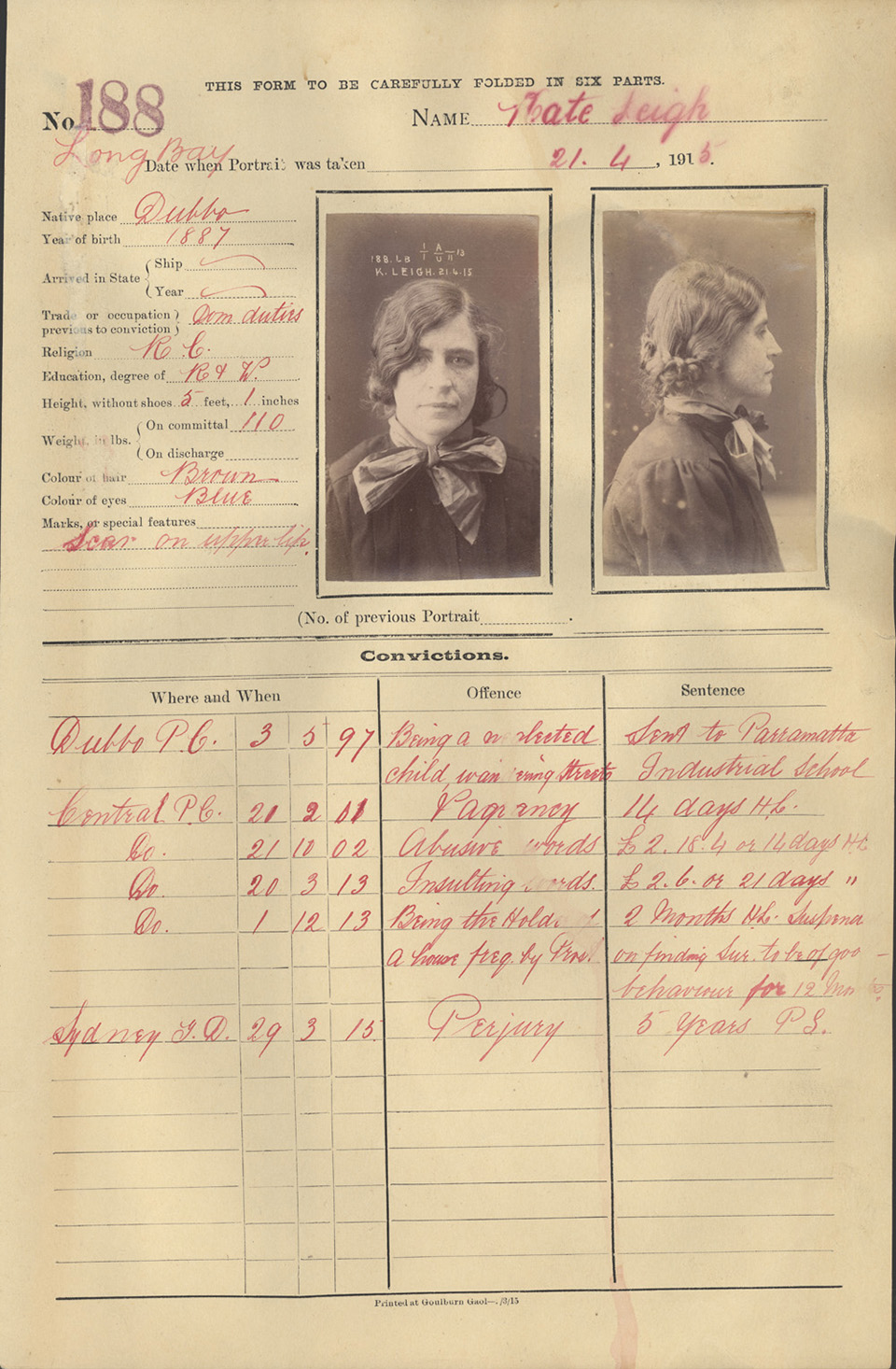 Kathleen Mary Josephine (Kate) Beahan was born on 10 March 1881 in Dubbo in the central west of New South Wales. She was the eighth child in a large impoverished Catholic family. The young Kate was head-strong, rebellious and often ran away from home. At the age of 12 she was charged with being a neglected child and was sent to Parramatta Industrial School for Girls. Conditions and routines here were fiercely draconian and very few girls were offered any schooling. They were trained in domestic service duties such as laundry, kitchen, general maintenance and cleaning, and few girls were equipped to reintegrate into society. [1]

Kate was released after four years and made her way to Sydney where she found work in factories and shops around Glebe and Surry Hills. In 1901 she was arrested for vagrancy and received 14 days' hard labour in prison. [2]

On 2 May 1902, Kate, then aged 21, married James Ernest 'Jack' Lee an illegal bookmaker and petty criminal who was part-Chinese. Kate anglicised the Chinese name Lee to Leigh. In October the same year she was charged and fined for using abusive words. In 1905 her husband was charged with the assault and robbery of their Glebe landlord. In his defence Kate made up a false story and found herself facing the serious charge of perjury. Jack was found guilty and sentenced to a stretch in gaol but his wife was acquitted. [3]

The marriage did not survive the enforced separation, although the couple did not officially divorce until 1922. Kate would go on to have a string of criminal lovers and marry again twice. In 1922 she married Edward Joseph Barry, a sly grog dealer and small time crook. The marriage did not last long. Her third marriage in 1950 was to her old friend and convicted armed robber Ernest Alexander 'Shiner' Ryan. They separated soon after the wedding and Ryan died in 1954.

Kate remained quiet until 1913, when she was again charged for using abusive words and received a suspended sentence for keeping a brothel. [4] It is clear that she was at this time associating with key figures in Sydney's criminal circles including her lover, the armed robber and leader of the Riley Street Gang Samuel 'Jewey' Freeman, and the notorious conman Ernest 'Shiner' Ryan. [5]

In June 1914 the nation was gripped by the sensational armed robbery of the Eveleigh Railway Workshops payroll, which occurred in broad daylight on 10 June 1914. It was the first time a getaway car had been used in the history of Australian crime and the Sydney Morning Herald reported it was a crime which 'for audacity of conception and cool effrontery of execution it could hardly have been surpassed.' [6]

Freeman and Ryan were charged for the daring heist and stealing the large sum of £3300. Both were found guilty and sentenced to ten years in Parramatta Gaol. [7] In court Kate swore on oath that she had been with Freeman at the time of the robbery but in March 1915 she was convicted of perjury. For this offence she was sentenced to five years in Long Bay Gaol. [8]

The introduction of six o'clock closing of hotels and public houses shaped the trajectory of Leigh's career after her release from gaol in 1919. For the next 35 years she provided illegal liquor, known as 'sly grog', to many Sydneysiders in the hours after 6pm. Six o'clock closing had been introduced in 1916 after a long campaign by temperance and social reform movements. [9] Yet rather than curb the consumption of alcohol, early closing unleashed a flourishing black market in unlicensed alcohol. Sly grog became a commodity for Sydney's criminal underworld and Kate was one of its leading proprietors.

At the height of Leigh's career she ran more than twenty sly-groggeries throughout Surry Hills and East Sydney. Her 'sly grog' was not home made 'moonshine' but rather legitimate and good quality. Some of her establishments were upmarket and frequented by dubious businessmen and questionable politicians. Others were mere shop fronts where beer, wine and spirits might be bought from under the counter at a hefty mark up on the prices Kate paid her brewery suppliers. Many members of the working classes in the inner city appreciated the clandestine service she provided after last orders had been called at the pub and a number of her establishments were affectionately known as 'Mum's'. [10]

[media]As Sydney's leading sly-grogger, Kate Leigh made a fortune from this lucrative business. At the same time, she was also dealing in a flourishing sideline of cocaine, opium, prostitution and stolen property, adding dealer, madam and fence to her resume. 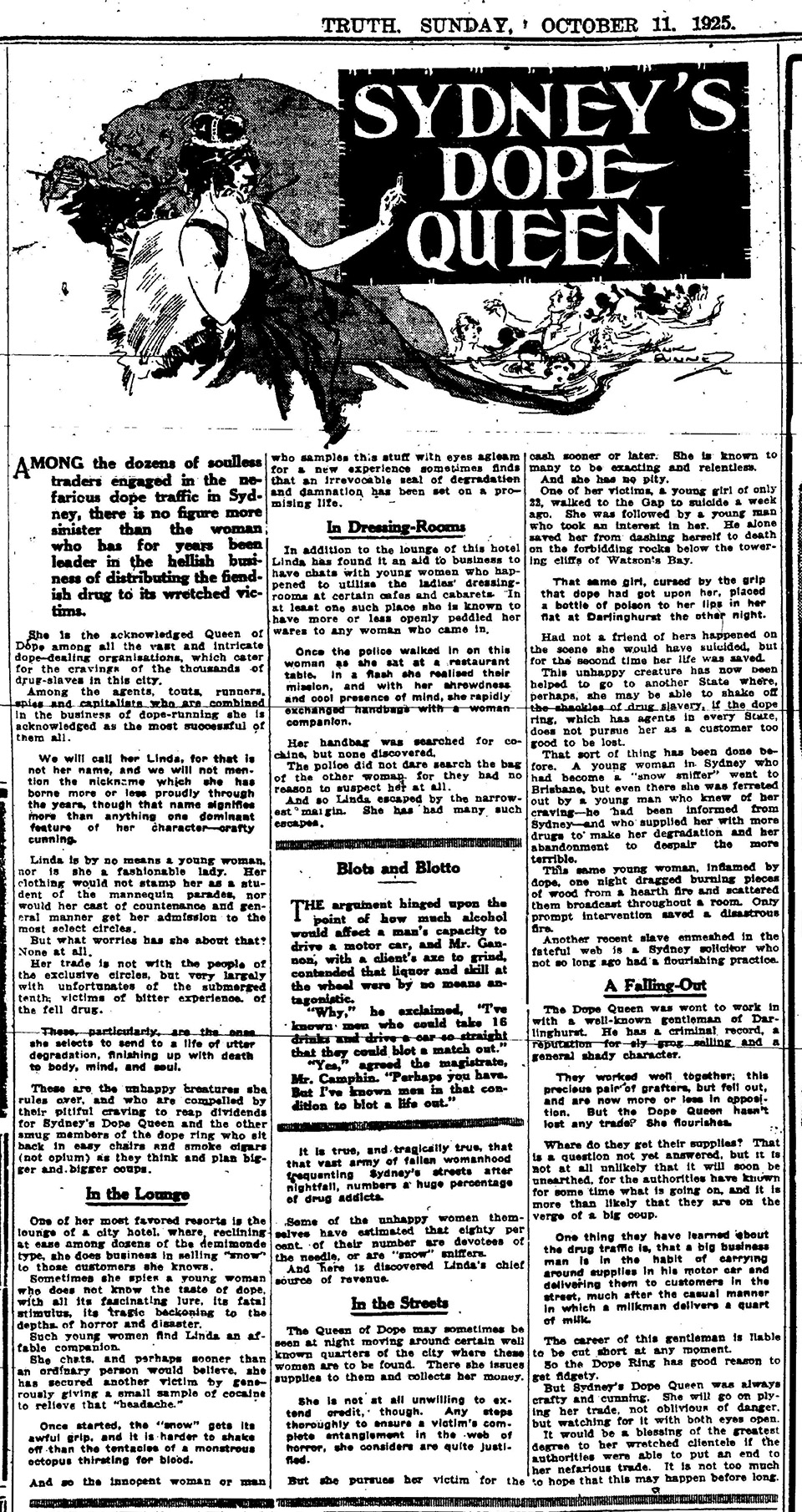 But Kate's illicit empire, headquartered at 104 Riley Street, Surry Hills, paid a price. There was constant police surveillance of her businesses as well as rivalry with other, competing criminal enterprises. Although she herself could be ruthlessly vicious with a weapon she paid a crew of bouncers and minders to be on the lookout for the police or rival gangs. When the razor wars of the 1920s and 1930s were at their peak, Kate Leigh's business was right in the thick of it.

[media]With newspaper headlines frequently screaming 'Gang War' and 'Terror on the Streets', the New South Wales Vagrancy (Amendment) Act 1929 was introduced to crack down on the wave of crime that many feared had engulfed Sydney. The Act included a new and draconian clause that made it an offence to consort with known criminals, prostitutes and others of dubious repute. The penalty was up to six months in prison. It was an authoritarian law, designed to heighten police powers to arrest anyone deemed to be of bad character. One of the effects of the law was that it took prostitution off the streets and forced it into underworld brothels. This suited Leigh's arch-nemesis, the madam Tilly Devine, perfectly. [11] 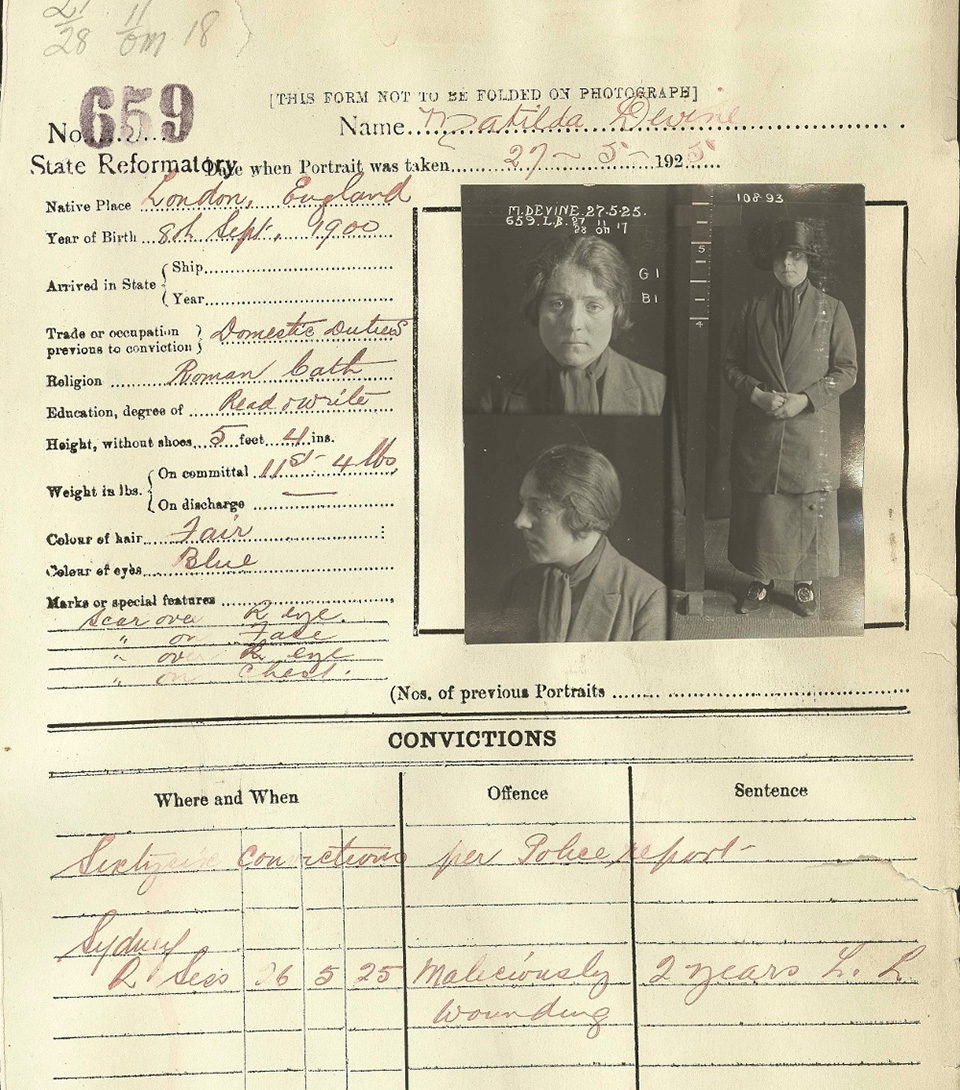 Now, at the height of her criminal career, Kate Leigh felt the full force of the law. Her houses were frequently raided for sly grog, cocaine and dubious characters. [12] Kate found herself facing the courts on many occasions. She was legendary for shucking peas or knitting during court sittings. Often she was fined but at times she was sent to prison. In June 1929 she was sentenced to four months at Long Bay for being in a 'house frequented by thieves.' [13] In January 1932 she was sentenced to six months imprisonment for 'habitually consorting with women of ill-repute'. [14] In February she appealed against her conviction but the judge took one look at her criminal record, which dated back to 1897, and dismissed the appeal outright. [15]

[media]Yet if Kate was regularly punished by the law she was also protected by it. In March 1930 she fatally shot rival underworld figure John 'Snowy' Prendergast. Together with three of his cronies he had broken into her home looking for her lover and henchman Wally Tomlinson. Kate was charged with murder but at her trial she pleaded not guilty and claimed she had been defending her life and property. The jury agreed and she was acquitted. [16] 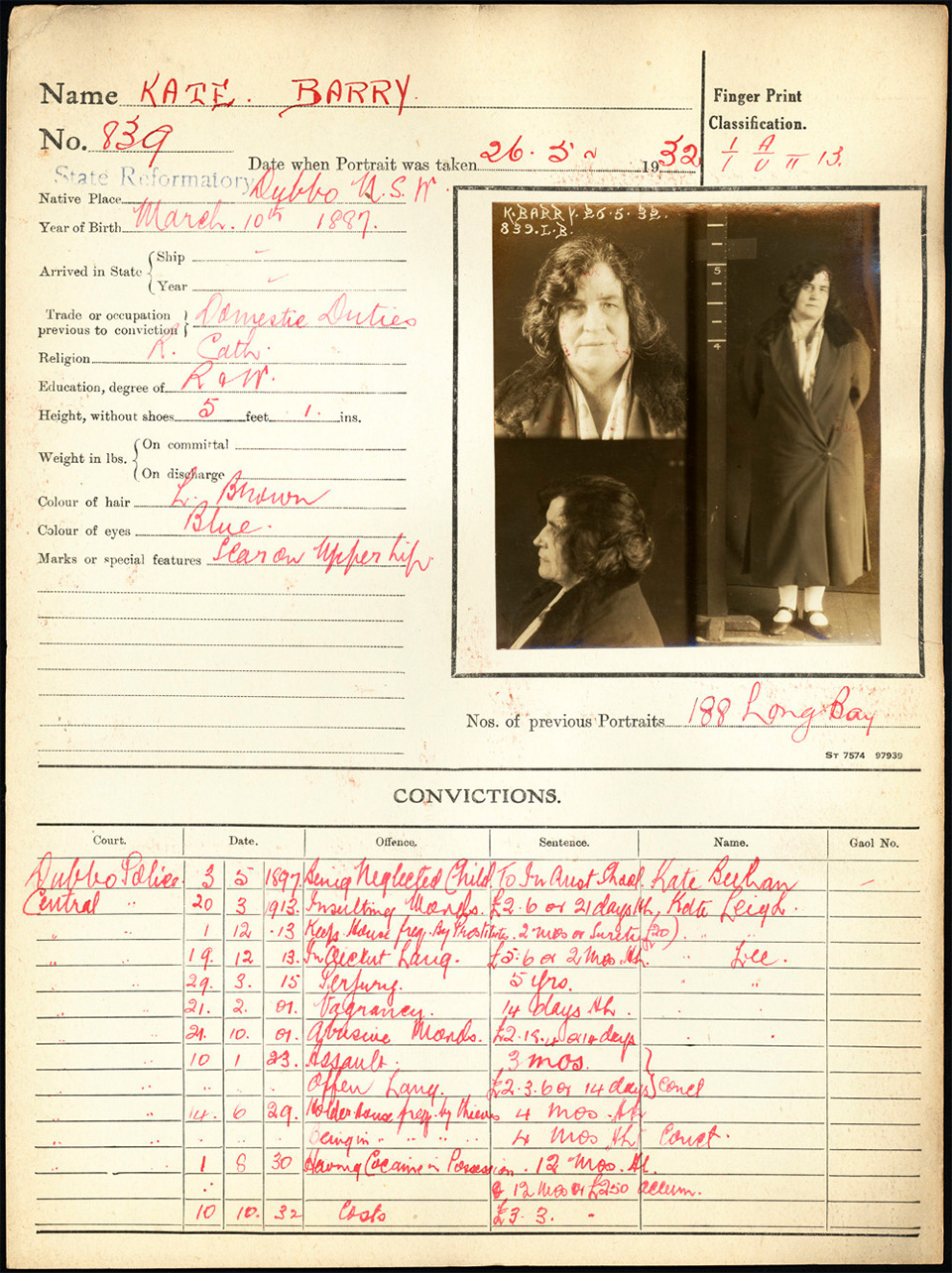 By the 1940s and 1950s the image of Leigh as a violent and ruthless criminal had been tempered by the changing times, her own advancing age and her solid standing within her neighbourhood of Surry Hills. To the local community she was a matriarch and a benevolent philanthropist, generous to both the needy and to the children of the area. She often warned youngsters about the futility of crime and she reportedly paid court fines for many people who could not afford to. At this time her sly grog businesses were still thriving and her premises were still being regularly raided, while her appearances in court remained frequent.

In September 1942 Kate Leigh was given the highest penalty of six months in prison and a fine of £100 for selling sly grog at her property at 13 Pearl Street. It was her fifth conviction for selling alcohol without a license. [17] A month later she successfully appealed against the conviction and informed the court that she was now gainfully employed in war work. [18] Despite her claims of patriotic duty, the following year she was again convicted, fined £100 and sentenced to six months in prison for selling beer without a license from 2 Lansdowne, Street, Surry Hills. [19] And in May 1947 she appeared in two courts in the space of one day. In the Licensing Court she was fined £150 for selling beer without a license. This time she pleaded guilty and before she left the court she took a large roll of banknotes from her handbag and peeled £150 from it. Later that day she was in the Special Court charged with selling six bottles of beer above the fixed price. For this she was remanded on bail of £30. [20]

[media]By the 1950s, the world of sly grog was beginning to diminish. Kate was acutely aware of this when she admitted that 'the bloom has gone off the grog'. [21] Kate's regular court fines and lawyer's fees, the cost of her staff, her generosity and her dwindling business empire meant much of her vast fortune had gone too. As with her arch rival Tilly Devine, the taxman eventually ruined her. After years of avoiding paying tax, the authorities came down hard on Leigh. She was made bankrupt on 31 March 1954 by the Federal Judge in Bankruptcy, Mr Justice Clyne. [22] Many of her remaining properties (together with her vast collection of furs and diamonds) were sold off to pay her debts. [23] 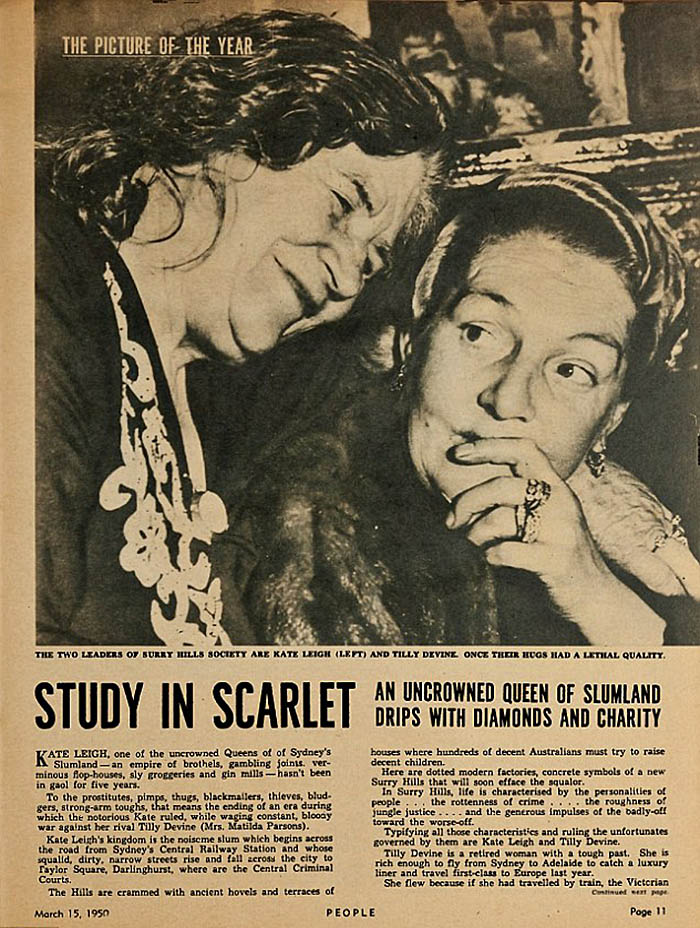 In 1955 the notorious long era of the six o'clock swill ended when the New South Wales Government extended hotel trading to 10pm. Sly grog had made Leigh wealthy but with drinking legal until 10pm she was unable to restore her fortunes. Kate would spent her remaining years living in secluded poverty at her home at 212 Devonshire Street, Surry Hills. [24]

On Friday 31 January 1964, Kate suffered a stroke. Aged 82, she died in St Vincent's Hospital on Tuesday 4 February. Her funeral was held at St Peter's Catholic Church in Devonshire Street, Surry Hills. Over 700 mourners, including politicians and policemen, attended. [25] She was remembered as a woman of the people, a kind, generous and spirited woman who had served the local community well. Less acknowledged was the fact that she had a long and extensive crime career and had been a ruthless profiteer and at times merciless underworld figure.

Keith Dunstan. Wowsers: Being an Account of the Prudery Exhibited by Certain Outstanding Men and Women in Such Matters as Drinking, Smoking, Prostitution, Censorship and Gambling. Sydney: Angus and Robertson, 1974.

[3] Other writers have suggested that Kate was found guilty of perjury and served five years in Long Bay Prison. Newspapers only report her acquittal. Sydney Morning Herald, 22 November 1905: 6

[9] Keith Dunstan, Wowsers: Being an Account of the Prudery Exhibited by Certain Outstanding Men and Women in Such Matters as Drinking, Smoking, Prostitution, Censorship and Gambling (Sydney: Angus and Robertson, 1974): 34–132

[10] For more on this and her popularity with this particular demographic, see Leigh Straw, 'Celebrating Kate: The Criminal Celebrity of Sydney Underworld Figure, Kate Leigh', Journal of Australian Studies, 40: 1 (2016): 59–73

[24] This house sold for $1.7 million in 2015. A café is located downstairs and acknowledges its former formidable resident with its name – Café Sly. 'Run-down house where "Queen of the Underworld" Kate Leigh ran her empire during Australia's razor gang era sells for a massive $1.7 million', Daily Mail UK, http://www.dailymail.co.uk/news/article-3318998/Kate-Leigh-s-criminal-home-sells-1-7-million-auction.html