[media]Keith Kinnaird Mackellar was an older brother to poet Dorothea Mackellar, and significant for being the only Australian soldier who was brought back to Australia of over one thousand men who lost their lives in the Boer War. 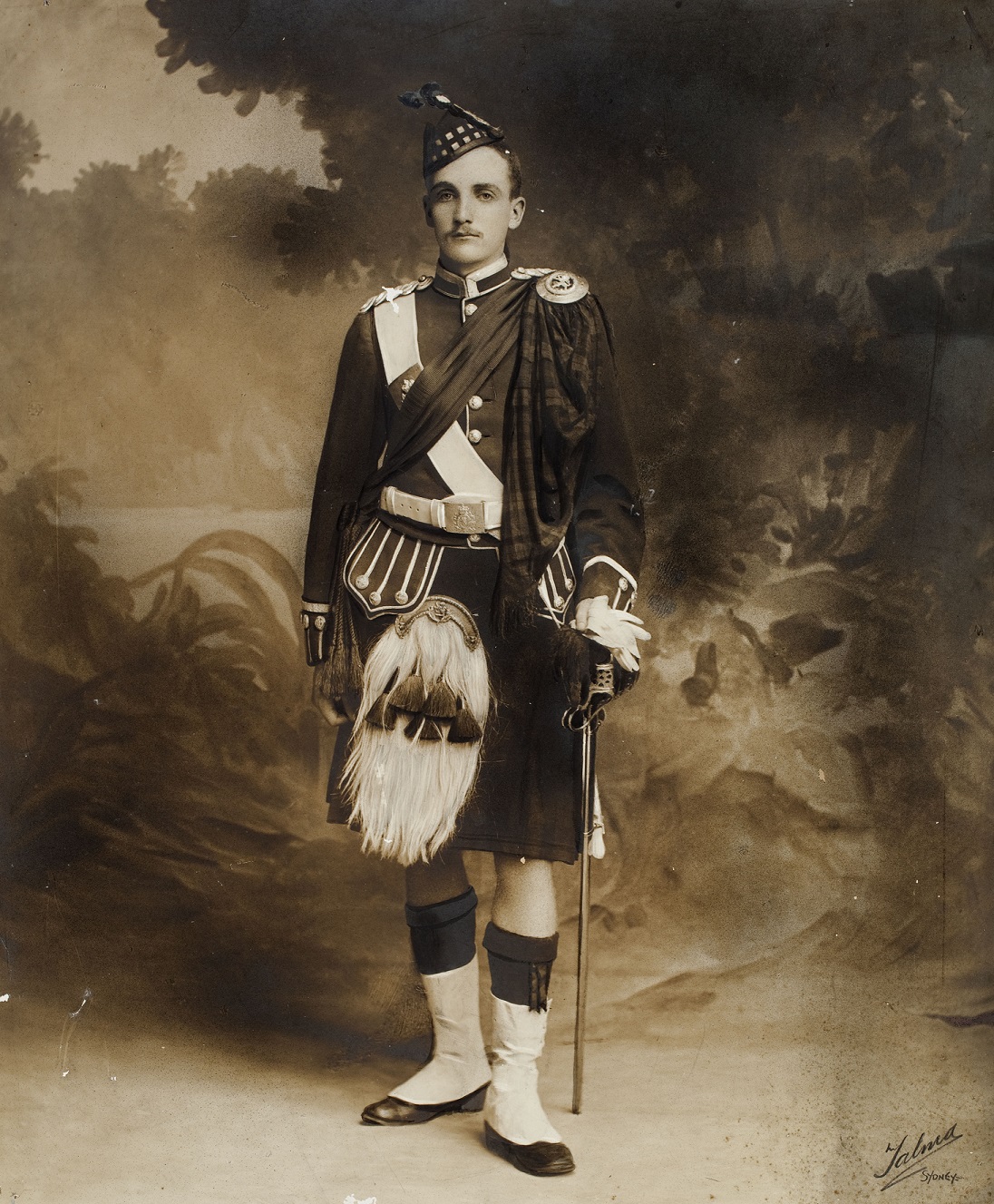 He was born 17 July 1880 at Dunara[1], a Georgian mansion built by his father at Point Piper. He was the first son of Australian-born Marion Buckland and Dr Charles Kinnaird Mackellar[2] physician, politician, businessman and Director of Royal Prince Alfred Hospital for more than three decades from 1886.

[media]Mackellar was brother to Eric, Malcolm, and Isobel Marion Dorothea Mackellar OBE, poet and fiction writer. The Mackellar children spent much time outdoors at Dunara, fascinated by the native flora and fauna, and keeping birds as pets. Accounts suggest Mackellar led a privileged and cultured Victorian childhood, with family drives in the carriage on Sunday winter afternoons at the newly laid out Centennial Park, playing polo with brother Eric in the bushland surrounding Dunara, and mixing in his well-known family’s elite circles. They often spent weeks together at Burradoo, New South Wales in rented farmhouses, and at the family farm Torryburn in the Hunter Valley region. They played cricket and rode horses. During summer they attended family picnics at harbourside Sydney beaches, and the boys learned to be skilled boatmen. They went on camping expeditions, rowed, fished and ate damper. 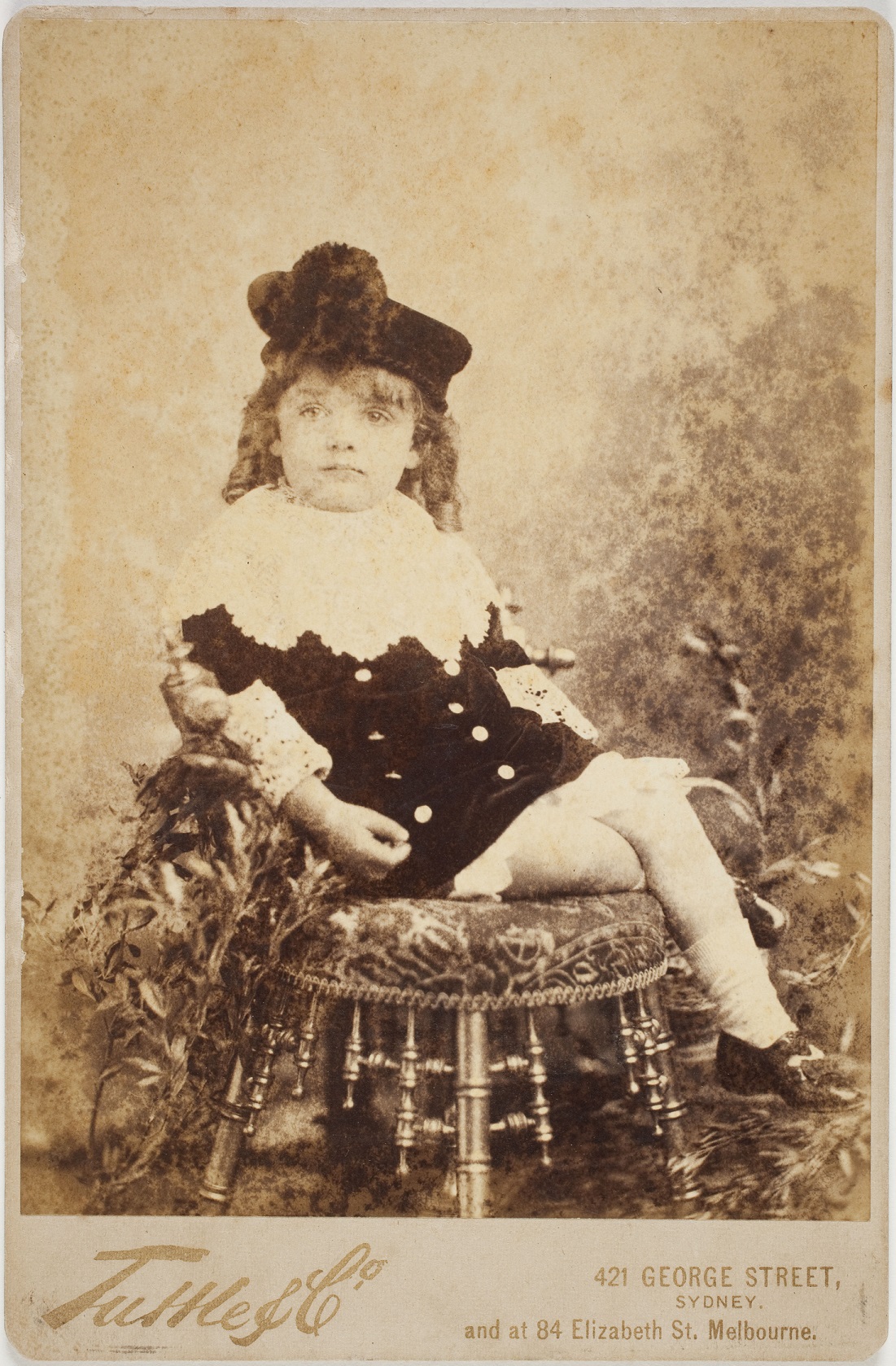 Mackellar was a great letter writer and began exchanging letters with his sister Dorothea from at least the age of 11. The letters reveal a shared love of the natural world, and describe kittens, pigeons, finches, flowers and trees, with some segments written in French. She treasured his letters her whole life.

Mackellar was educated at Sydney Grammar School with his brother Eric, and enrolled as a pupil for five years from July 1894. He participated in football and was most successful in athletics, particularly running. He was a keen boxer and considered facile princeps with the gloves. He continued to frequent the gymnasium after he left school, giving assistance to members of the class.

[media]Interested in a military career, in March 1898 he received his commission to become a junior officer as part of the 5th (Volunteer) Infantry Regiment (Scottish Rifles), and promoted to probationary 2nd lieutenant the following year. He also enlisted in a New South Wales bush regiment, the 1st Australian (Volunteer) Horse Unit, 5th (Voluntary) Infantry Regiment. 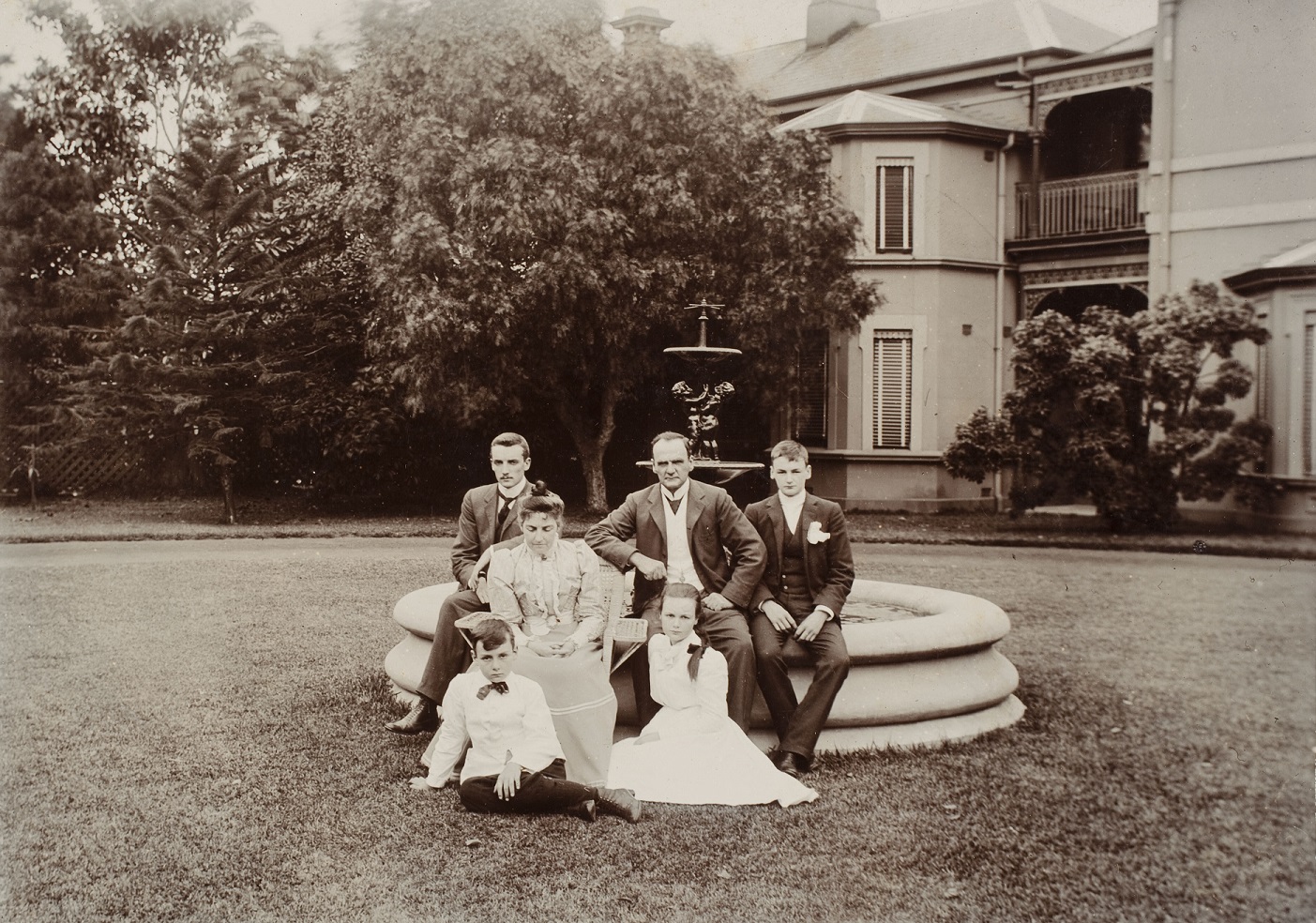 In 1899 Mackellar enrolled as an undergraduate in first year Arts at the University of Sydney in a year which included future literary historian and journalist H M Green. Mackellar also took drawing lessons from Italian artist Anthony Dattilo-Rubbo who encouraged experimentation in the work of his Sydney students.

Mackellar’s studies were interrupted by the outbreak of the Boer War in October 1899. He applied for admittance to the Imperial Service and was directed to join the Gordon Highlanders in Punjab. Before he made his way there, the Gordons had moved to South Africa. Mackellar then joined the Mounted Infantry Unit, 1st Australian Horse Squadron as senior subaltern, and sailed for South Africa on the Surry in January 1900, taking a servant-groom as well as his own horses[3]. He hoped to join the British 7th (Princess Royal) Dragoons at the front in South Africa.

His first letter from South Africa to his family, via Dorothea, describes his enjoyment of his new military life:

…It seems funny for me to have as my juniors men from ten to fifteen years my senior, doesn’t it? I feel quite strange, as everything connected with this biz does. Much as I will miss you all, I am enjoying this life above everything  I have ever experienced and feel sure that it is what I will do best at and that  not a Napoleon just yet though in future time I may be one, and in everything  else I am an awful duffer.[4]

Not long after his letter was sent, the Mackellar family sailed for England, planning to meet with him in London, thinking the war would soon be over. He continued to write:

I expect that you are all enjoying England very much. I know that I shall be glad enough when this war is over – I’m pretty sick of it now, especially that we get heavy frost every night, they made sleeping in the open hardly what one might call fun. However it can’t last much longer.[5]

Mackellar was appointed war correspondent to Sydney Grammar School and penned an article for The Sydneian from Bloemfontein, by which time he was describing daily life as a soldier in far more sombre terms:

Every day there is something – either we occupy a farm and eat its ducks, or we get fired at from under a white flag, or from out an ambulance waggon, by gunners wearing the red cross. The more we see of South Africa the more we appreciate Australia, and there is not one would give his own particular corner of New South Wales for the whole Free State. We would rather have our miles of ringbarked timber than this barren, desolate, treeless waste.[6]

By May 1900 he had been hospitalised with severe enteric fever, which disgusted him. He exhorted Dorothea: ‘I need your letters.’ Weeks later his longed-for commission with the 7th Dragoons was gazetted, but he was forbidden to leave the hospital despite asking several times to be released. He disobeyed orders, sneaked himself out of the hospital, and by June 1900 had joined the British unit.[7]

[media]Mackellar lost his life within a month, on 11 July 1900, a week before his twentieth birthday, when shot through the head with a Mauser bullet in a skirmish near Derdepoort in Pretoria. It is said the Boers lured Mackellar and his men to their farm by dressing in the khaki uniforms and helmets of the Australian Horse. When a burial party found Mackellar’s body the next day, they discovered 36 empty cartridge cases. He was first placed at rest at the Wonderbloom farm near the site where he fell, and then in the military section of the cemetery in Pretoria. 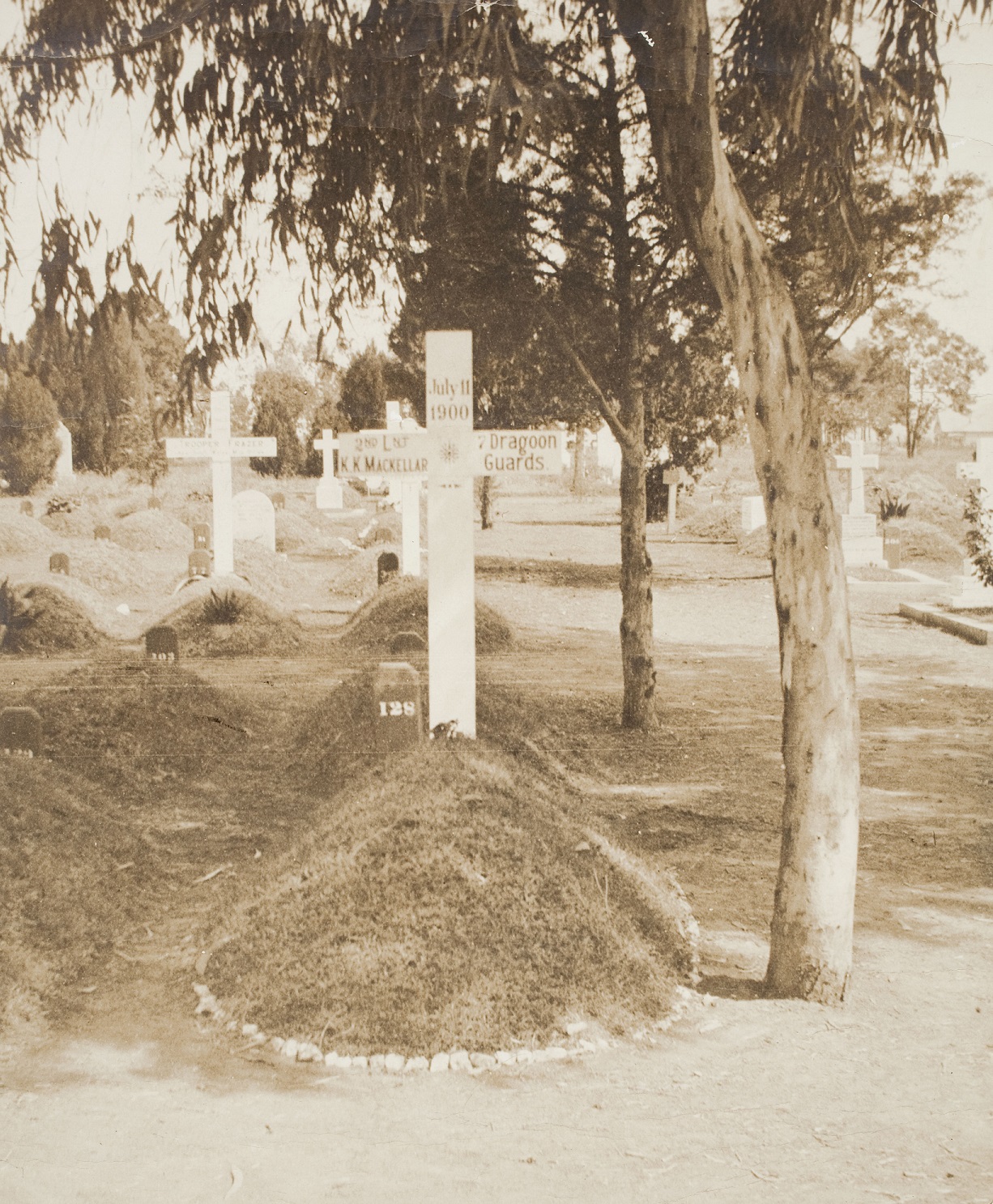 Mackellar’s family arrived in London but did not discover news of his death for several days. Newspapers in Sydney reported his passing in full. Hermes, the undergraduate magazine of the University of Sydney, had been giving the war fairly light coverage until it printed news of Mackellar’s death. From that time onwards the possibility of establishing a war memorial for fallen university men was spoken about.[9]

His funeral service was conducted with a church parade at All Saints’ Church Woollahra on 5 August 1900, with hymns accompanied by the Band of the Scottish Rifles.[10] There was a large congregation. His death was felt keenly by the Mackellar family and is said to have inspired Dorothea’s first recorded poem ‘When It Comes’, written when she was 15.

Where the red blood soaks in the thirsty

And the wild things tread my grave as

According to Dorothea’s private nurse and memoirist, she was unable to speak about her brother without emotion even in the last years of her life.[12]

[media]The Boer War ended in 1902, and in 1905 Mackellar’s family brought his body home to Australia at a cost of £1000. He was transported in a container marked ‘Curios’ so as to avoid contact with customs and any superstitious sailors who might find him.[13] Mackellar now rests in Waverley Cemetery in the Mackellar family plot under a white marble cross from South Africa. His family’s act was significant in that of over one thousand Australian soldiers who lost their lives in this war he is the only one who was brought back to Australia.[14] 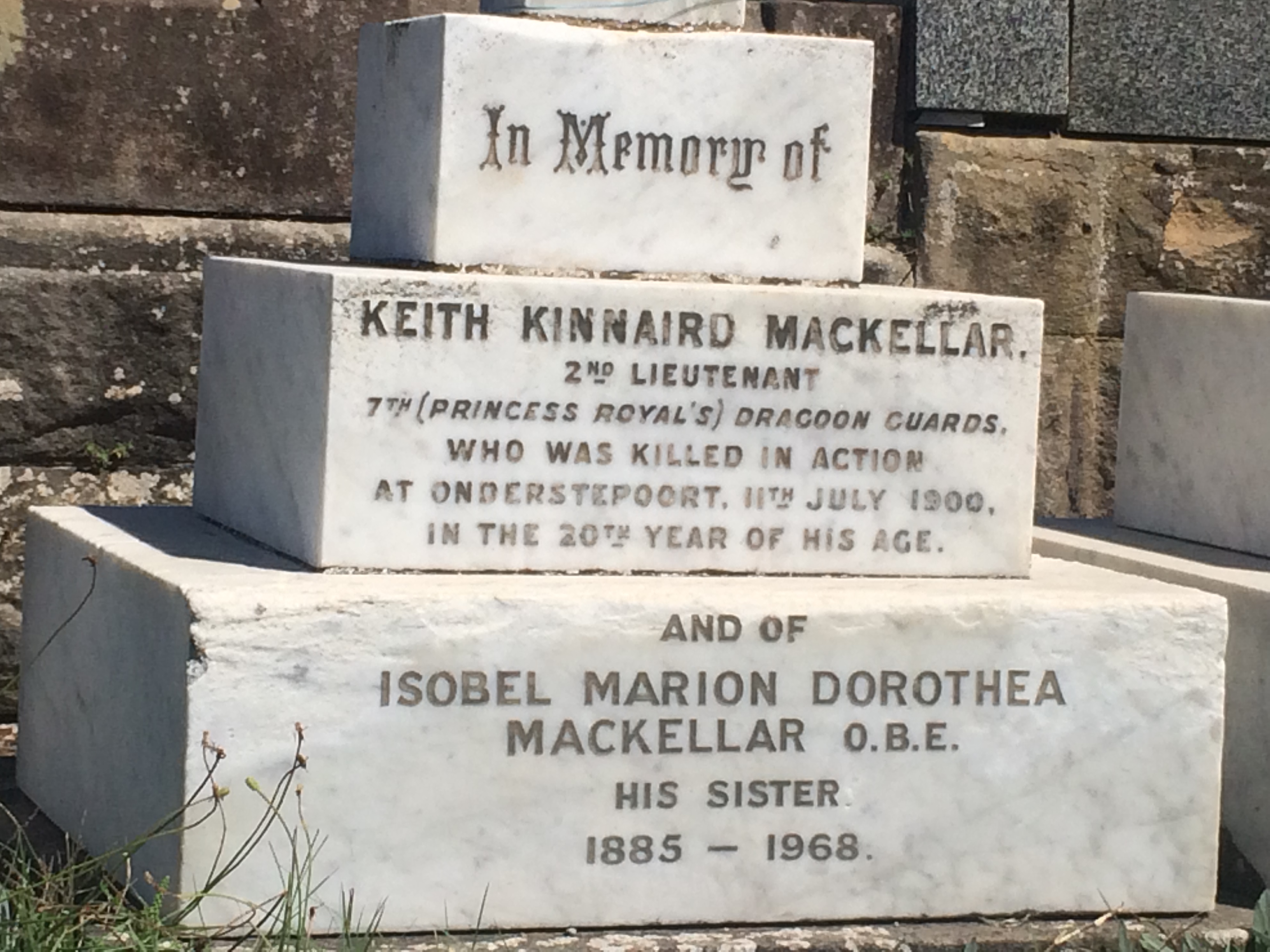 A memorial inscription to Mackellar commissioned by his family at a memorial service on 11 July 1903 can be found in St James church, the oldest church in Sydney. On the north wall, a copper plaque sits below a stained glass window image of St George the patron saint of soldiers, depicting Mackellar’s face.

To the Glory of God and in loving memory of Keith Kinnaird Mackellar Lieutenant 7th (Princess Royal) Dragoon Guards who was killed in action at Onderstepoort, South Africa on the 11th of July 1900 in the twentieth year of his age. Who shall ascend to the hill of the Lord of who shall rise up in his holy place? Even he that hath clean hands and a pure heart.[15]

Mackellar’s name is inscribed on the Roll of Honour at Sydney Grammar School for those who gave their lives for the Empire, the schoolboys at the time being told that these men represented the ‘White Knights’ of the school.[16] Mackellar was eulogised by his headmaster as having ‘a personality singularly attractive, strength of purpose and power of will.’[17]

[media]In 1907 ceramic memorial tablets were added above the inner ward doors of the Victoria and Albert Memorial Pavilions at Royal Prince Alfred Hospital. ‘The Keith Kinnaird Mackellar’ tablet was placed in the large ward A3 north. Its inscription ‘Qui procul hinc qui ante diem periit sed miles sed pro patria’ translates as ‘Who has come here from afar and died prematurely as a soldier for his country.'[18] 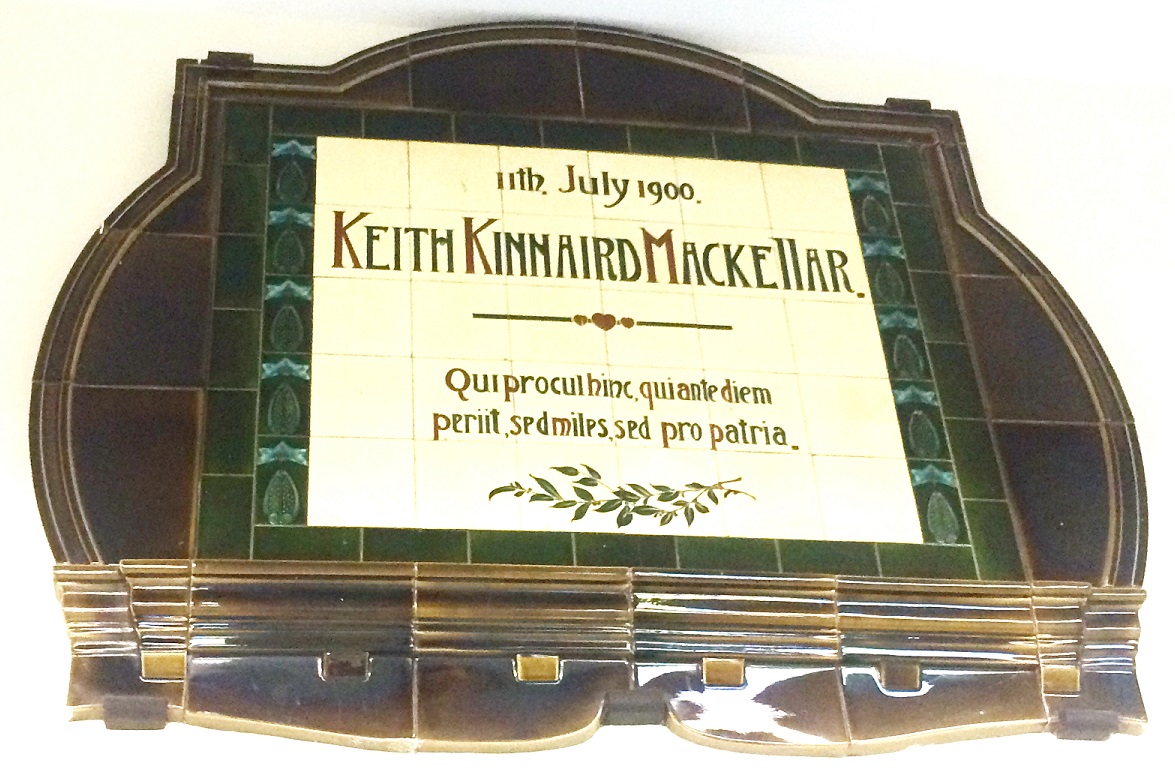 The dedicated tablet is now attached to the wall in the Emergency Department of Royal Prince Alfred Hospital.

The State Library of New South Wales holds a framed collection of four locks of now silvered hair of the children of Dr Charles Kinnaird Mackellar and Marion Buckland, in a heart-shaped frame made of leather.[19] The item is thought to have been created by the family during the 1890s.

[1] Dunara was a large estate completed c1883 which once stretched east to Wunulla Road. It is now at 10 Dunara Gardens, Point Piper. The original estate was subdivided and now comprises a cul-de-sac of 11 houses.