The Biennale of Sydney as Cultural Walking Tour

Sydney [media]has the third longest running biennale in the world after Venice (established in 1895) and Sao Paulo (in 1951). From its beginnings in 1973, the Biennale of Sydney embraced unique venues to host the exhibitions, with a less than humble launch at the Sydney Opera House. The first exhibition hosted 36 national artists alongside their international contemporaries. The following biennale of 1979 was held at the Art Gallery of New South Wales and began the expansive tradition of traversing many of Sydney's sites including the Australian Centre for Photography, Paddington Town Hall, Hyde Park, The Sculpture Centre in The Rocks and events in The Domain. In years to follow, the Art Gallery would become the centrepiece of biennale sites only rivalled by the introduction of Cockatoo Island in 2008. 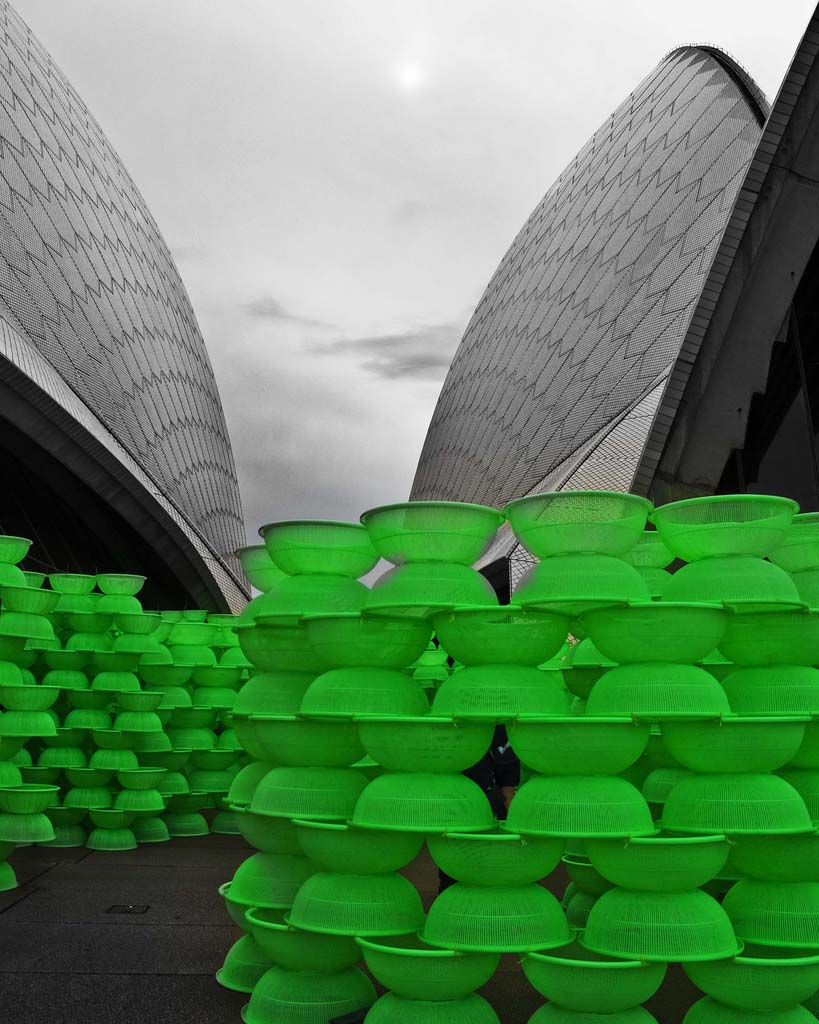 One of the beautiful formations that resulted from the Biennale is the partnerships between major institutions. This was cemented in 1998 by the introduction of the Museum of Contemporary Art to the Biennale of Sydney. Today, the Biennale has become a cultural walking tour for audiences, starting the day at the Art Gallery of New South Wales, weaving a course through the various installations within The Royal Botanic Gardens, walking the foreshore to end at Circular Quay to catch the free ferry to Cockatoo Island and finishing with a late viewing at the MCA.

The biennale as cultural tour has antecedents in Andre Malraux's Museum Without Walls. [1] Malraux espoused experiencing art outside the confines and constructs of traditional museum contexts. Within Malraux's premise, art resonates with audiences when they are given the space to draw their own connections between works, bringing to and going away from it their own personal reflections. The Biennale of Sydney succinctly provides visitors with this experience by liberating art from the usual museum format; that is, by presenting contemporary art within an overarching theme, in many locations, without a historical or linear context.

While to some this makes the Biennale easy to dismiss as 'spectacle', Malraux would cite it is a 'privileged spectacle' [2]. The overall exhibition may be overwhelming, the art may be big and the themes broad, but direct engagement and experience is not deprived to anyone; something resonates, a phenomenological return is inevitable and as visitor numbers grow each biennale, there is a physical return too. While the museums without walls thesis may defy historical lineage, the Biennale of Sydney itself is not without history; it is a cultural landscape interwoven with personal biographies.

One of Australia's great curators, whose visions and guidance of the growth of the Biennale has shaped our appreciation of what it is today, is Nick Waterlow, OAM. Waterlow was the Biennale's most prolific artistic director: he curated the 1979, 1986 and 1988 exhibitions, was Chair of the International Selection Committee in 2000 and served on the Board of the Biennale of Sydney for 11 years (1994–2005).

Nick Waterlow's first Biennale of Sydney in 1979 furthered Malraux's ethos by challenging the hierarchy of the New York art centre:

Democratisation of the arts is debilitating when it involves standards that derive from one central source radiating their own terms of achievement around the globe. [3]

What Waterlow initiated was the power to thwart an established hierarchy. European Dialogue, the third Biennale of Sydney, challenged the dominance of the New York influence as the leading centre for contemporary art, overshadowing Europe and Australia. In his own words, Waterlow was striving to represent artists for their 'visually creative autonomy':

It is now accepted that remarkable work is as likely to arise in Cracow, Turin, Dusseldorf, Vienna, Paris, London or Amsterdam as in New York. [4]

Australian artists and their international contemporaries

As director of the third Biennale of Sydney, Waterlow explored postmodernist themes of originality through appropriation, mortality of the artist, deconstruction and other modes of crisis centred on the hand of the artist. Most interestingly, Waterlow quotes Imants Tillers within his essay:

The museums without walls thesis was again being explored. However, Tillers felt the Australian experience of reproductions had protected artists from the resonance ('aura') of the original. Within the framework of the sixth Biennale of Sydney, Origins, Originality + Beyond, the challenges of appropriation and pastiche were experienced through the juxtaposition of Australian artists and their international contemporaries: Joseph Beuys, Julie Brown Rapp, Mike Parr, Sherrie Levine, and Ken Unsworth. Faith in audience engagement was always important to Waterlow's curating:

But the main function of the Biennale of Sydney and this one in particular is to ask questions rather than answer them a priori: to present the evidence for the audience to make up there own mind. [6]

The only director to be invited a third time to the Biennale of Sydney, Waterlow followed the 1986 biennale with what was to become the most seminal Biennale of Sydney to date. As part of the bicentennial celebrations, the 1988 Biennale of Sydney had a huge focus and expectation. For Nick it was a continuation of passions that were explored but finally realised in From the Southern Cross: A View of World Art c1940–1988. The most telling precursor to Nick's seminal 1988 biennale was in his foreword to the 1986 exhibition, Origins Originality + Beyond:

There is always a sadness associated with an exhibition of this scale as some plans inevitably do not come to fruition. We had scheduled three satellite exhibitions to complement the central section. The first a historical exhibition to set the Biennale's context, was to have included a late work against a mature period work by the likes of… [citing, among others, Picasso, Braque, Duchamp, Andy Warhol, Paolini, Jannis Kounelis, Gunther Brus and Gerhard Richter – all who appeared within the Bicentennial Biennale. [7]

As exhibition director, Nick Waterlow embraced the ethos of Malraux's museum without walls through his juxtaposition of Australian artists with their international contemporaries. As an audience and a nation, we were finally able to understand our own art as part of the international scene with relevance and importance. Again Waterlow had sought to resolve this issue:

For the first time a small number of key Australian antecedents will be shown side by side with their peers from other countries. This should have occurred years ago but did not…' [8]

A celebration of Sydney, as well as art

From here on Sydney biennales became more grandiose. They lived up to the moniker 'the Olympics of the artworld'. Thematics became more complex, and possibly more allusive. What was achieved was an embrace of Sydney as a physical space and cultural landscape; as sites to be celebrated, explored and culturally excavated.

With the introduction of such iconic sites as the MCA, Botanic Gardens, Piers 2/3 at Walsh Bay and Cockatoo Island, visitors came in droves. The free nature of the sites serviced by free public transport has meant that the Biennale of Sydney is not just for art lovers but families as well. A city is if nothing the people that make a place. Hence the Biennale of Sydney has surely become a celebration of how people experience Sydney as well as how we experience art.

Nick Waterlow's contribution to the Biennale of Sydney did not finish with his untimely passing in 2010: the inaugural Nick Waterlow Curatorial Fellowship was founded in 2010 to coincide with the 17th Biennale of Sydney, The Beauty of Distance – Songs of Survival in a Precarious Age. The curatorial fellowship is a partnership between The Australia Council for the Arts and the Biennale of Sydney in recognition of Nick's contribution to the former organisation (from 1980–83, Nick Waterlow was also the Director of the Visual Arts Board of the Australia Council.) This opportunity not only celebrates the memory of Nick Waterlow's achievements, it continues his commitment to mentoring others and exploring ideas rather than defining outcomes.