It was one of those serendipitous happenings that set the course for future developments in Sydney's south-western area.

In 1795 rumours of the existence of a herd of cattle in the south-western area of the Cumberland Plain reached the authorities in Sydney Town: perhaps this explained what had happened to the animals that strayed from Farm Cove in 1788 and had not been seen since. Governor Hunter dispatched a party to investigate the reports, and this led to the discovery of those 'lost' cattle.

Hunter [media]decided to visit the area himself, to see the cattle and the country, leaving Parramatta on 18 November 1795. After travelling for a few days, his party crossed the Nepean River, at a spot near where the Camden Cowpasture Bridge now stands, and there they found the herd of over 40 cattle. Arrangements were made for a more complete survey of the area, and in June 1796, Hunter again visited the locality, giving it the name Cowpastures: he marked it on a map he drew, dated 20 August 1796. With such an auspicious development, Hunter encouraged wider exploration of the Cumberland Plain, finding good land at Georges River and Banks Town. 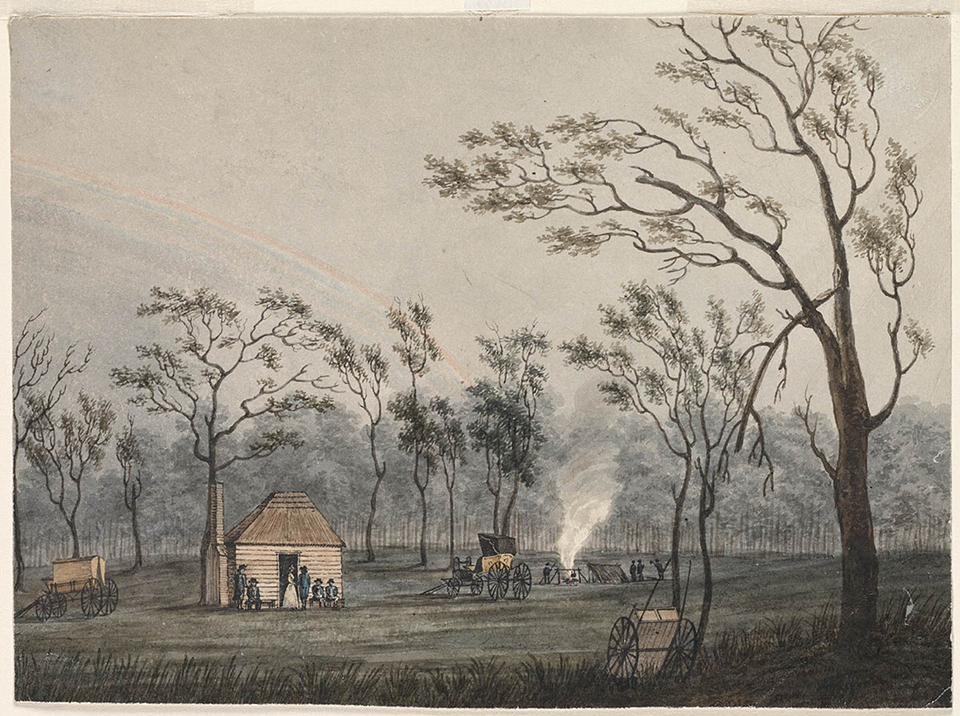 Road development and maintenance experienced severe neglect under Governor Bligh, who saw little virtue in private enterprise and little need to provide infrastructure to widely scattered pastoral areas. But lieutenant-governors Foveaux and Patterson – once again concerned about the possibility of food shortages – granted land at Minto, Mulgoa, St George, Banks Town, Bringelly and Holdsworthy. The gradual growth of settlements around these grants produced a need for good roads to get the produce back to Sydney Town

It was up to Lachlan Macquarie to take matters further. In 1813 a road connecting Sydney Town to the new town of Liverpool, on the Georges River, was first mooted. Construction commenced early in 1814 and by April 1814 a road from Liverpool to the Western Road near Parramatta (later to be called Dog Trap Road and then the Woodville Road) was in progress. It was completed by May 1816 when tolls were levied on the new road. Almost at once, settler numbers increased, including market gardeners, farmers and timber-cutters.

As with the other major highways being built at the time, travellers' needs resulted in several hotels being built on the Liverpool Road, including the Dove Inn near the modern intersection with Croydon Avenue, in Croydon.

Work [media]commenced on improvements to the Liverpool Road in 1826, and this fitted in well with the vision of Major Thomas Mitchell who, as Assistant Surveyor-General during the late 1820s, planned for three Great Trunk Roads in the colony. The Liverpool Road was a major gateway to Sydney Town, of critical importance for the economic development of the south-western area of the Cumberland Plain. Reflecting the increasing importance of this area both as a population centre and a pastoral region, in December 1830 prominent local citizens addressed a memorial to the Governor, pointing out that the most eligible site for a new township was in 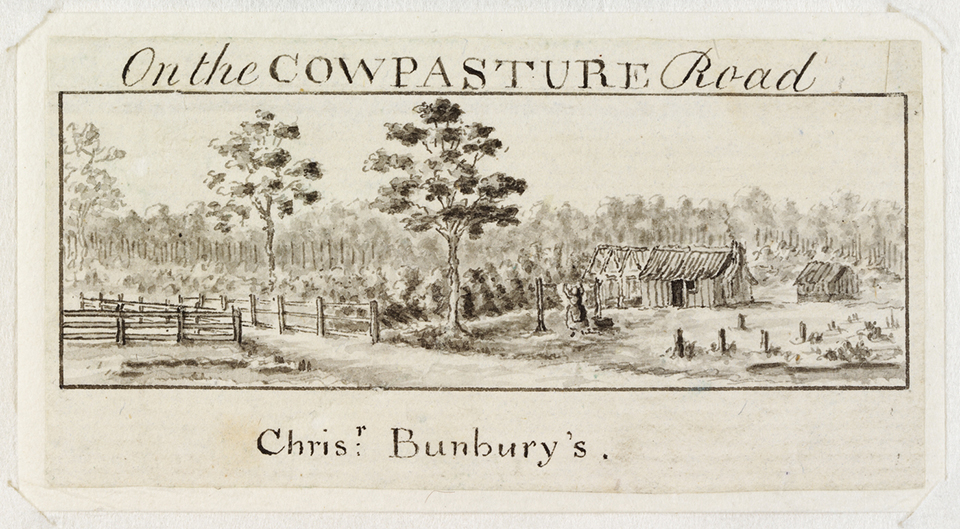 the vicinity of the Cowpastures Bridge on the banks of the Nepean, a central situation in the most populous parts of these districts and abundantly supplied with water.

Mitchell, by now Surveyor General, reported that the western bank was most suitable, and suggested that John Macarthur be asked to surrender 320 acres (129.5 hectares) of his land for such a purpose. This Macarthur declined to do, fearing that the formation of a town would 'greatly endanger the security of the whole establishment on that estate': he was concerned about possible future encroachments on his property. But in 1836, two years after Macarthur's death, his sons had a township surveyed, and the land was offered for sale in 1840 in 100 allotments of half an acre (2023 square metres) each. Provision was made too for the erection of a church, 'the situation of which will be highly picturesque and commanding', and also for a 'first rate commodious hotel'. By February 1840 this was already under construction and was licensed as the Camden Inn on 21 June 1842, in the name of Joseph Goodluck.

Although the area along the Liverpool Road closer to the Parramatta Road remained lightly settled, with the Parish of Concord, which included all of modern Concord, Burwood, Croydon and Enfield, having a mere 216 houses and a population of 1172 in 1848, [1] the Camden district experienced considerable increase in settlement between 1830 and 1860. This was due in later years to road improvements carried out under the direction of Captain BH Martindale, who arrived at Sydney in July 1857 and became Commissioner of Internal Communications. He saw his role as providing 'indispensible communications on a rational basis' for the colony, and the Main Roads Management Act of June 1858 made Martindale responsible for the three main roads leading out of Sydney to the north, south and west. [2]

But the 1850s gold rushes had a detrimental effect on farming in the south-west area. As in other agricultural districts, many small-scale landholders were caught up in the gold fever and population dwindled. This occurred in the Bankstown area, which experienced a further drop in this population when the railway extension bypassed the township in 1856. Some farmers moved closer to the railway in order to get their produce to Sydney. But short-term disruption caused by the gold rushes was followed by increases in the population of Sydney Town and this resulted in suburban infill along the Liverpool Road, with a number of substantial villas being built: perhaps the largest, Roslyn Hall, now St Joseph's Convent, belonged to William Hudson, a well-known timber merchant, while Iruak (Kauri spelt backwards), on the corner of Croydon Avenue, was built for Robert Walker, manager of the Kauri Timber Company. Other villas included Tahlee and Wynola, designed by John Horbury Hunt in 1883 for grazier Andrew Broad. [3]

Over time suburban development intensified along the road. By the late nineteenth century a small shopping area developed at what became Strathfield, featuring a post office, general stores and timber yards; this was helped by the proximity of the rail line. From 1909, the development of the Malvern Hill Estate finally opened up the portion of Croydon between the railway line and Liverpool Road. Quickly thereafter the subdivision of the Cintra Estate was begun. Further out, what was originally known as Irish Town because of the Irish settlements, later became known as Upper Bankstown, becoming officially known as Bass Hill in October 1924.

Once a gateway into Sydney Town, the old Liverpool Road is now little more than a very long 'suburban street, while the Hume Highway is now the M5 Motorway, probably the busiest transport link in Australia, carrying 40 per cent of the nation's freight.

[1] William Henry Wells, A geographical dictionary or gazetteer of the Australian colonies, 1848, Facsimile, Sydney, Council of the Library of New South Wales, 1970, p 130