[media]The overhead roadway across Circular Quay was opened on 24 March 1958 by John Joseph 'Joe' Cahill, Premier of NSW. Controversial from its conception, the expressway (named in honour of the Premier after his death in 1959) provoked a variety of responses. Critics branded it a 'tragic blunder', largely on aesthetic grounds. [1] Its brutality marred Circular Quay, the striking, historic gateway to Sydney which houses the city's principal public ferry terminals and is today flanked by the Sydney Opera House and the Overseas Passenger Terminal. 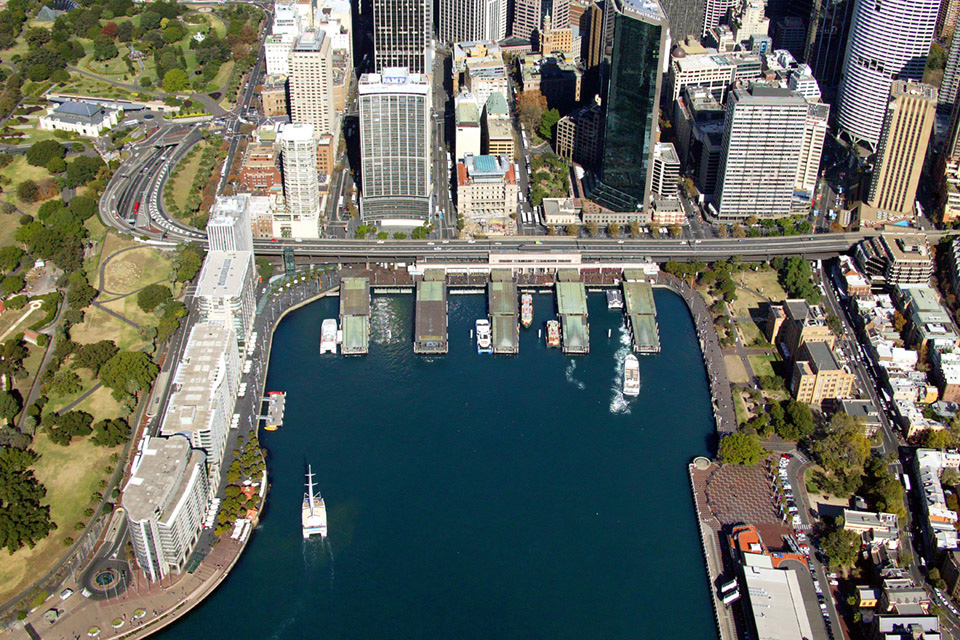 Utilitarians had mixed feelings about the roadway, but most thought it a necessary evil for the alleviation of city traffic congestion. When the extension of the expressway to Woolloomooloo opened on 1 March 1962, the photographer John Mulligan portrayed the new tunnel as a modest victory of modern sensibilities and technology.

Had he been alive, Cahill would have approved of Mulligan's image. At the 1958 opening of the overhead roadway, Cahill told the assembled gathering the structure 'was 'a striking symbol of Sydney's growth and maturity'. [2] And in some ways it was. Skyscrapers, one of the most symbolic representations of twentieth-century modernity, began to appear in Sydney only during the second half of the 1950s. Indeed, they were primarily a phenomenon of the 1960s. The Cahill Expressway formed part of this new concrete, glass and tile cityscape.

However, Cahill was on extremely shaky ground when he described the expressway as 'a triumph of democratic planning, in so far as citizens and leading experts were consulted as to the ultimate design'. [3] Drawn out, dogged by conflict and bemusing to many observers, the design and execution of the Cahill Expressway were characteristic of the fraught and fickle politics of urban design. They reveal much about the chequered history of town planning in Sydney.

Circular Quay was the subject of a number of surveys, inquiries and royal commissions from the 1850s into the construction of a city railway and a harbour crossing. But it was the City and Suburban Electric Railways Act in 1915 that gave legislative force to the plans of the influential public engineer JJC Bradfield for an underground city railway, including an aboveground station at the Quay. War and difficulties over finance delayed its construction until 1923.

While the line from Central to St James opened in 1926, the scheme for Circular Quay remained on the drawing board. It was later said that 'jealousy between professional men' (that is, Bradfield and the Railway Commissioners) 'caused difficulties over the site for the Quay station'. [4] The Depression of the 1930s caused further delays, while a number of committees considered various plans and public submissions.

Work ceased at Circular Quay from 1941 until 1945 because of the war. Little was said about the project in the press or Parliament until the passing of the City and Suburban Electric Railways (Amendment) Act in 1947, which made provision for an overhead roadway. Throughout 1948, Circular Quay, and in particular the much loathed proposed roadway, was in and out of the headlines. Such loathing was not dependent on the tastes of a particular generation: a general repugnance to the idea, and later the reality, was apparent over time – and still remains.

City of Sydney Council appealed to the premier to place the road beside the railway. Architects, town planners and their various associations condemned the plan. The retired dean of architecture at the University of Sydney, Professor Leslie Wilkinson, said of the 'horrible [roadway] scheme' that it was 'one of the maddest I have ever seen'. Editorials pleaded that it was 'Time to save the Quay'. A steady flow of letters to the editor generally supported this sentiment. Alternative plans were produced. A Circular Quay Protest Committee was formed. Cahill, then minister for works and local government, convened a conference of interested parties at the premier's request, probably to stem the imminent flow of delegations to the premier's office. Cahill, indeed, acknowledged that 'there could be a tremendous aesthetic improvement in the Railway Department's design'. [5]

While the state cabinet was still formally deciding the matter in early 1951, the debate was effectively over. Daniel Clyne, the Labor member for King, the electorate that covered the eastern end of the expressway, had argued for the completion of the works during the 1930s. Now he told his parliamentary colleagues that the 'new roadway is necessary to cater for the growing traffic in the city, and we should not fight against progress of this sort'. William Sheahan, the minister for transport, noted a little later in Parliament that the

expert opinion of engineers is that an underground station at that point would be possible, but the cost would be colossal.

He promised that the final outcome would 'not be a permanent blemish on Sydney's waterfront'. [6]

Circular Quay railway station opened in January 1956, completing the loop from Wynyard to St James. The underground railway extensions cost £12 million, much of which was spent on the Quay loop and station. The roadway cost £2.5 million. But its opening on 24 March 1958 did not go exactly as planned.

After a 20-minute speech by Cahill, and seconds before he was to cut the ceremonial ribbon, three youths attempted to undertake this duty for him. 'A wild struggle ensued,' the Daily Mirror reported, 'as detectives grabbed the youths. Others, believed to be university students, joined in the melee'. Some women screamed. During this incident, which recalled the premature opening of the Harbour Bridge by Francis de Groot in 1932, the Daily Telegraph reported,

other students posted a calico notice on the railway half-way along the roadway … It said: 'Joe's Drive-In: Bridge on the River Quay. Starring Joe Cahill and his cost of millions. Took 30 years to build'. [7]

Police removed the offending banner. Twelve uniformed and 11 plainclothes officers guarded the roadway's entrance next to the Conservatorium.

The four-lane tunnel extension of the expressway to Woolloomooloo, which cost £3.5 million, was opened without incident by Pat Hills, the minister for local government and highways (and no friend of town planning) on 1 March 1962.

Back in the news

It was not until March 1993, when Sydney won the bid for the 2000 Olympic Games, that the expressway, long regarded as an eyesore, rocketed back into public debate. On 28 March the Sunday Telegraph proclaimed on its front page: 'Cahill Expressway to Go'. This was a personal initiative of the Liberal premier John Fahey, who wished to remove the offending structure from the 'beautiful harbourside location'. The subsequent debate devolved into a political bun fight. [8]

Discussion about modifying or removing the expressway reemerged in 2007 with a strong recommendation from international architect Jan Gehl to the City of Sydney that the Cahill be removed, opening Sydney's waterfront again. [9] Until action is taken however, the Cahill Expressway continues to cut across Sydney's premier gateway and to excite protest.