Colebee [media]is first mentioned in European sources in late 1789. On 23 November, along with Bennelong, another famous local, he was abducted from Manly Cove by Lieutenant William Bradley. This was on the orders of Governor Arthur Phillip, who wished to use these two natives to learn about their language and customs. 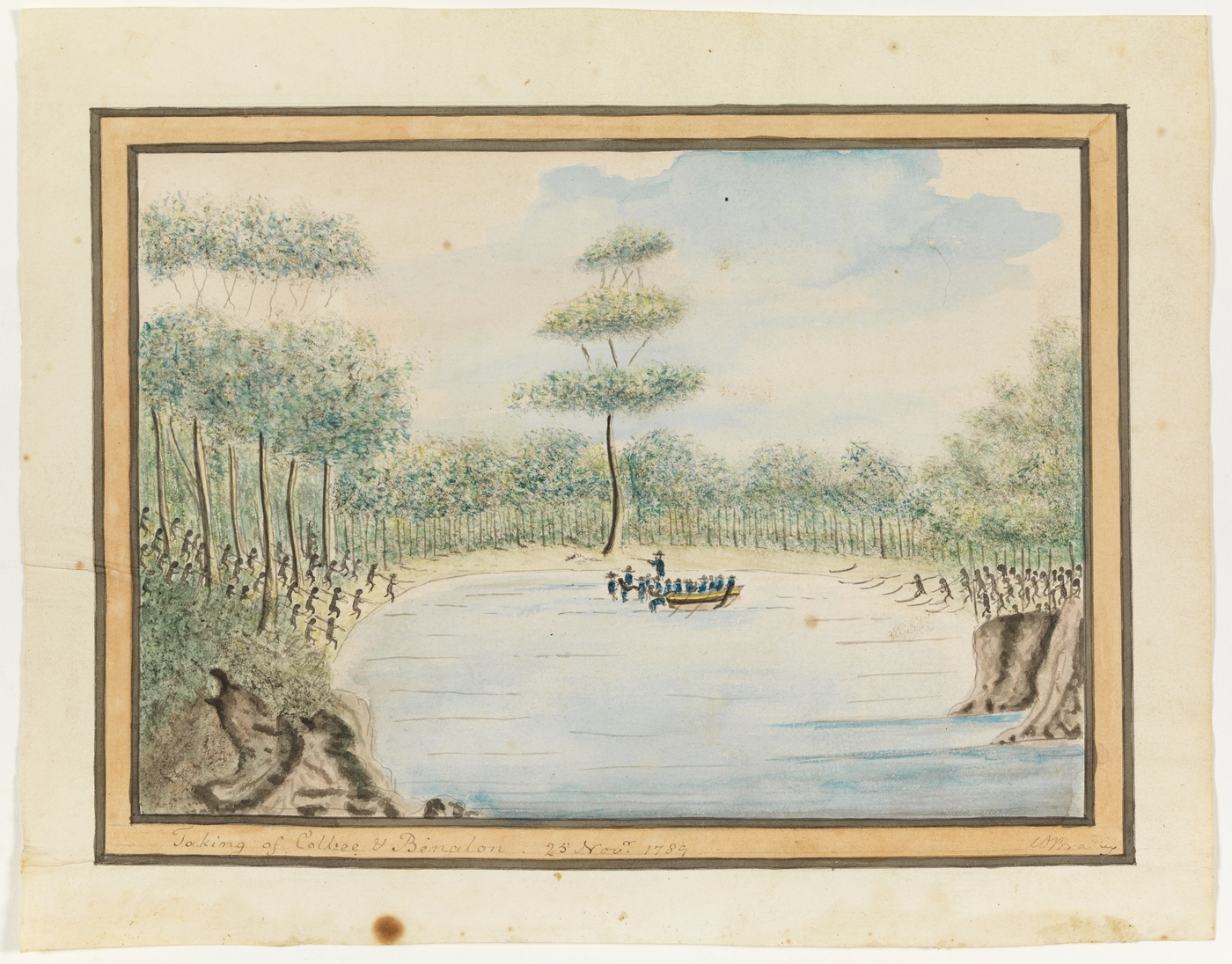 Colebee was a Cadigal, from the clan which inhabited the present eastern suburbs of Sydney. His face was heavily scarred by smallpox, from which he had recovered. The midshipman Newton Fowell described Colebee as 'the principal one of the two.'

Colebee soon escaped from captivity. On the night of 12 December 1789, he pulled the rope from his leg shackle and ran off into the bush. Bennelong ran away some six months later, in May 1790. Then, on 18 October 1790, not long after Bennelong and some companions 'came in' peacefully to the Sydney settlement, Colebee met Governor Phillip 'at the next cove' (probably Farm Cove) to conclude a separate peace agreement and to receive a metal hatchet.

While only a small number of Aboriginal people around Port Jackson were familiar with the European settlers, or interacted with visitors, Bennelong and Colebee were the leading Aboriginal men in Sydney at that time. Both men have been portrayed in sketches or drawings as wearing the possum skin headbands of initiated men.

Midshipman Newton Fowell of the First Fleet flagship HMS Sirius gave Colebee's names as 'Gringerry Kibba Coleby'. 'Gringerry,' that is 'Goungarree' (Robert Brown, 1803) or 'Congare' (Maroot the Elder, to Benjamin Bowen Carter, 1798), was the Sydney language name for the cuts in the chest. According to David Collins, 'Kibba' from gibba, kibba or kebah, meant a rock or stone. It was a term used to indicate that a man's front tooth had been knocked out by a stone during initiation. Similarly, Daniel Southwell gave Colebee the name of 'Kebada Colby.'

It is likely that Colebee's totem was the white-bellied sea eagle (Haliaetus leucogaster). In a caption for one of his pictures, the convict artist Thomas Watling recorded the name of this majestic bird as 'goo-le-be' ( gulbi).

Colebee exchanged names with the Gweagal (Fire Clan) warrior Wárungin, Wángubile Kólbi. He was from the south shore of Botany Bay and was called 'Botany Bay Colebee' by the colonists.

His wife Daringa was a half-sister of the clan leader Moorooboora. The name Moorooboora means 'pathway to Long Bay', being derived from muru (pathway) and Boora (Long Bay). This is how the present seaside suburb of Maroubra gets its name. They had a daughter named Panieboolong, who died at the age of about five months.

Mrs. Coleby, whose name is Daringa, brought in a new born female infant of hers, for me to see, about six weeks since: it was wrapp'd up in the soft bark of a tree, a specimen of which I have preserved … The child thrives remarkably well and I discover a softness and gentleness of manners in Daringa truly interesting.

Colebee is said to have often taken part in ritual revenge battles, in which he wounded many and killed several rivals. There are no written references to him between 1793 and January 1805, but in July 1805, Colebee and Bennelong, who were usually allies, fought a duel over Bennelong's wife Kurubarabulu.

Colebee probably died in a payback battle in 1806 or not long after, but his death was not officially recorded and he was not heard of again after 1806.

Another Colebee was a guide who assisted William Cox when he surveyed the road across the Blue Mountains. This Colebee, along with Nurragingy, tried to bring about a peaceful resolution to the years of conflict between white settlers and local Aboriginal people along the Hawkesbury, Nepean and Colo rivers, and in the South Creek area.

For this, Colebee and Narragingy received the first grant of land made by the British to an Aboriginal person. Governor Macquarie wrote in his diary on 25 May 1816:

On this occasion I invested Nurragingy, alias Creek Jemmy with my Order of Merit by presenting him with a handsome Brass Gorset or Breast Plate, having his name inscribed thereon in full – as chief of the South Creek Tribe. I also promised him and his friend Colebee a grant of 30 acres of land on the South Creek between them as an additional reward for their fidelity to Government and their recent good conduct.