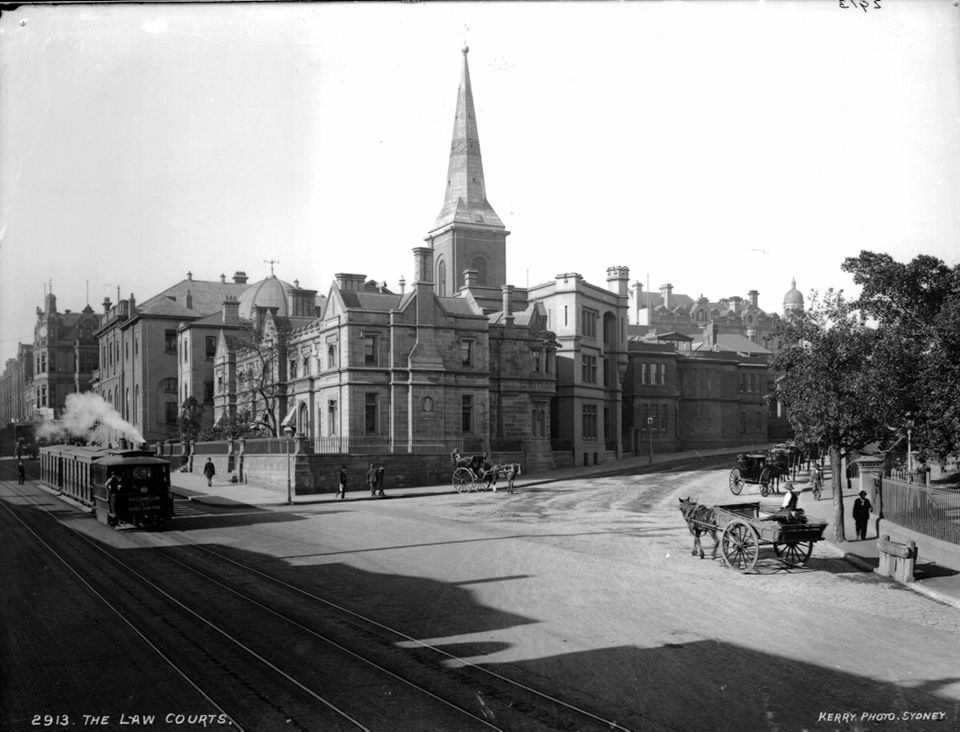 [media]Under Governor Macquarie's plan to improve the architectural quality and setting of the town of Sydney, the building which is now St James Anglican church was conceived as the Supreme Court. However, on the recommendation of John Thomas Bigge, the Commissioner of Inquiry, the court house became St James church, and the building beside it, originally intended to be the Georgian Public School for the education of the children of the poor, became the first permanent purpose-built court house in Sydney. 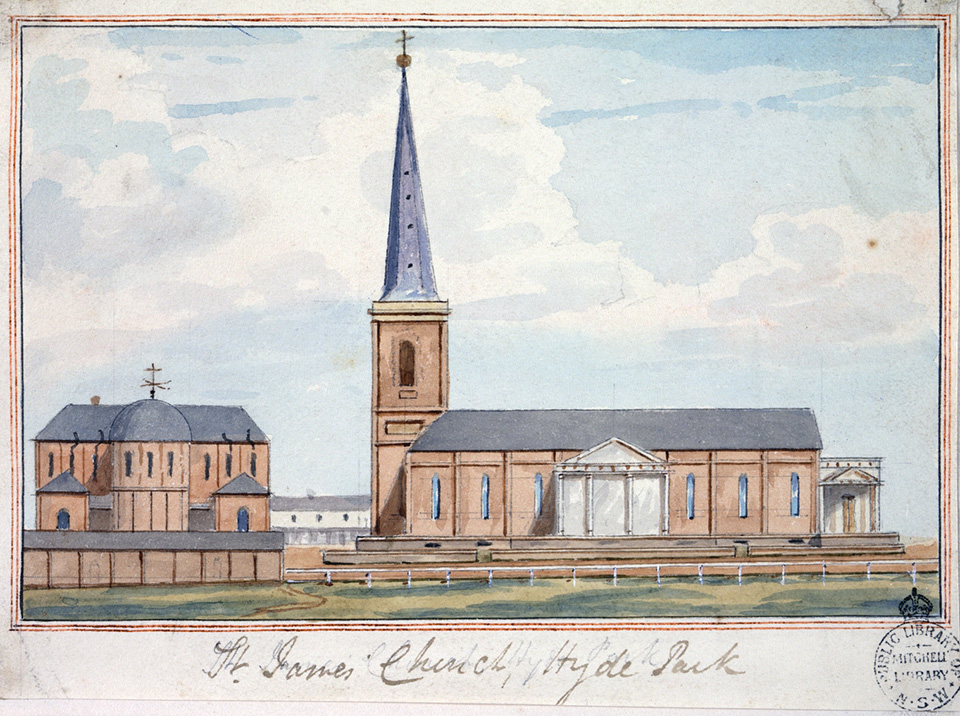 Francis Greenway's emasculated [media]design for the court house, which was to have faced Hyde Park with an imposing façade of Doric columns and grand staircase, was reduced to two projecting wings housing two court rooms, offices and chambers linked by a paved terrace, a central rotunda enclosing a geometric staircase, and an entrance off Elizabeth Street. It was completed in January 1829, nine years after construction had begun. 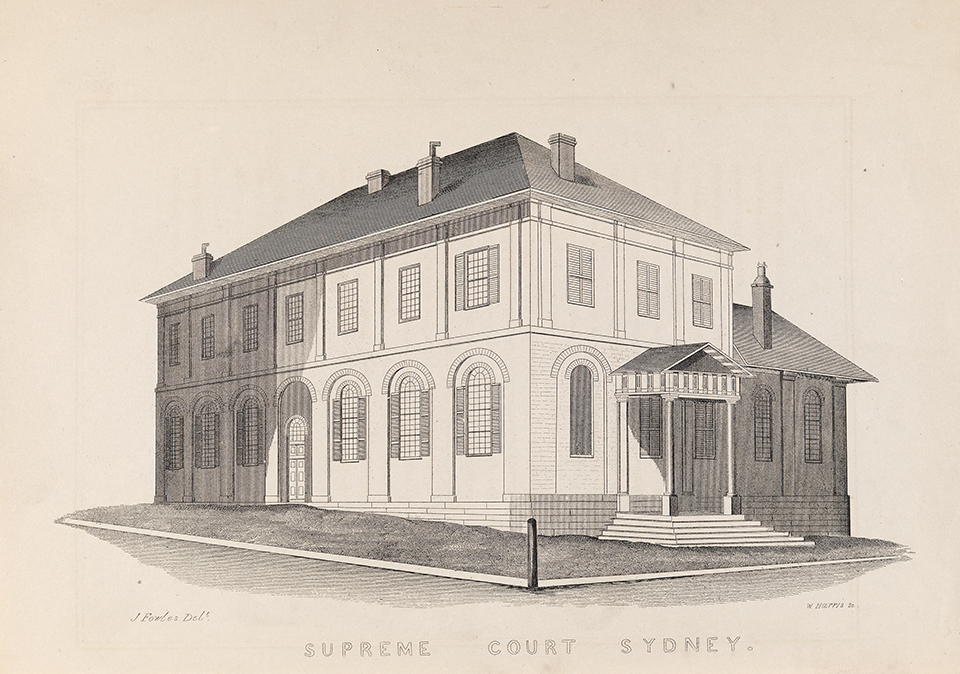 [media]Complaints about the shortcomings of facilities for both judicial officers and members of the public, the lack of space and the poor architectural standard of the building, began as soon as the building was completed. The relocation of criminal jurisdiction and quarter sessions to a new court house at Darlinghurst in 1845 relieved some of the pressure, while the site was progressively consolidated with small additions, infill and temporary structures. The most [media]significant alteration was the addition in 1867–68 of an arcade with a Doric entablature along the King Street façade, designed by colonial architect James Barnet. 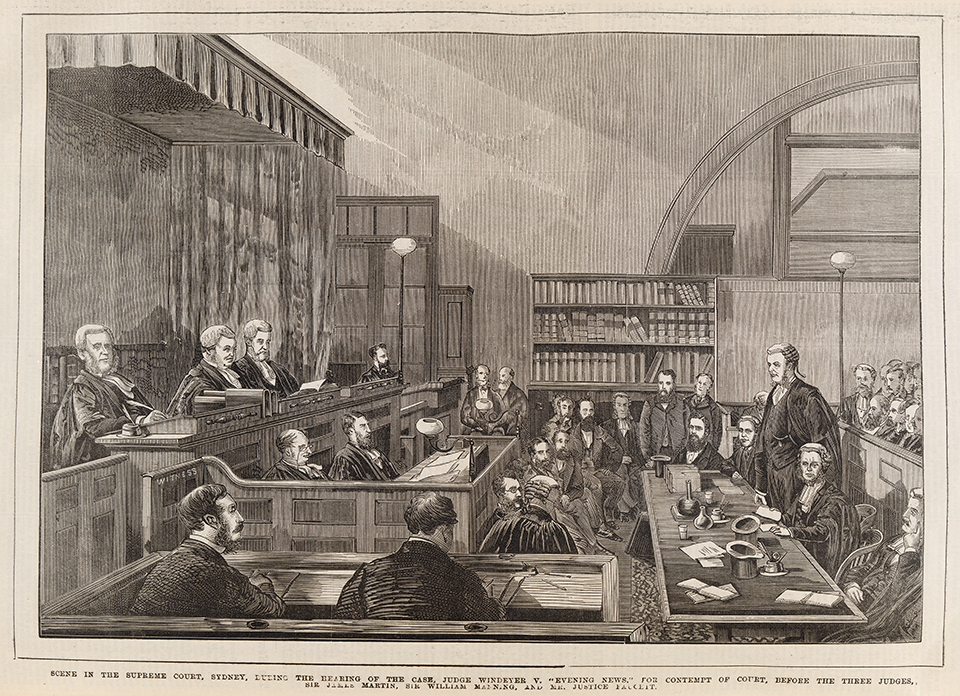 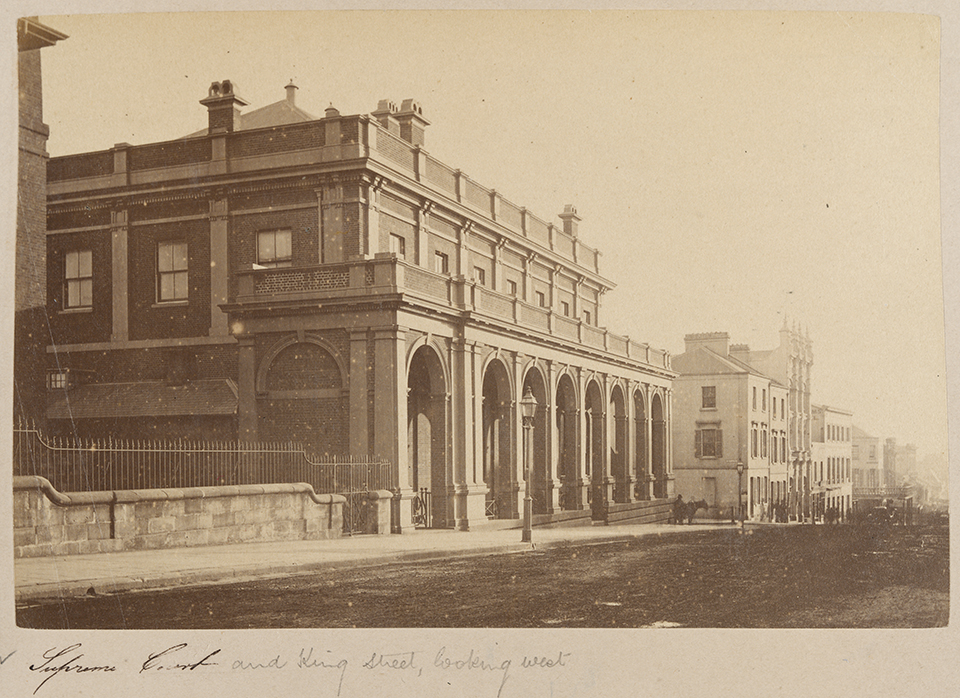 In 1860 a [media]central repository for land records, deeds and registered documents was built adjacent to the Supreme Court. Designed in Tudor Gothic style by colonial architect Alexander Dawson for the Registrar-General's Department, the sandstone building featured a number of early fireproofing measures, including the use of shell lime and stone infill around the timber joists, iron window sashes, doors and roofing, and stone floors. Following the introduction of the Torrens system of conveyancing in 1862, the building was extended to house a Land Titles Branch. In 1913, the department moved to larger premises opposite St Mary's Cathedral, and the Registry was occupied by equity and bankruptcy divisions of the Supreme Court. 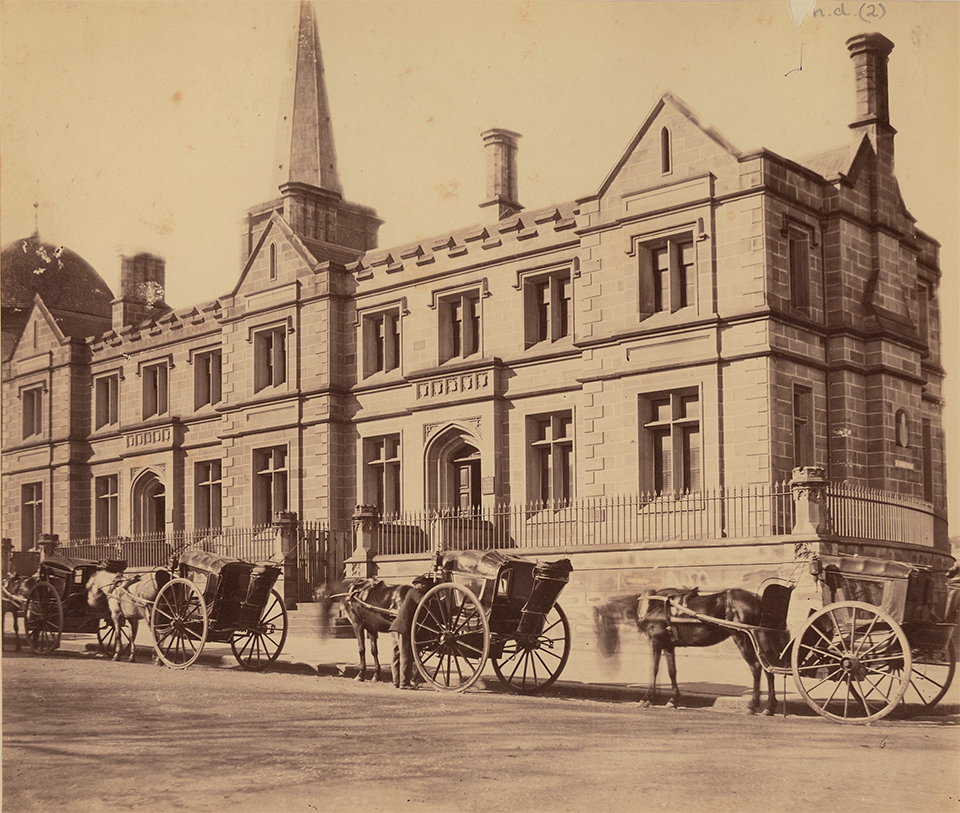 Colonial architect Walter Liberty Vernon[media] designed a new court building on St James Road adjacent to the Elizabeth Street Registry, to house a Banco Court, for full sittings of the bench, and associated chambers, offices, and rooms for barristers, witnesses and the jury. Completed in 1895 in Federation Free style, the design incorporated chambers for the Chief Justice overlooking a small garden, reminiscent of the traditional English inns and courts. 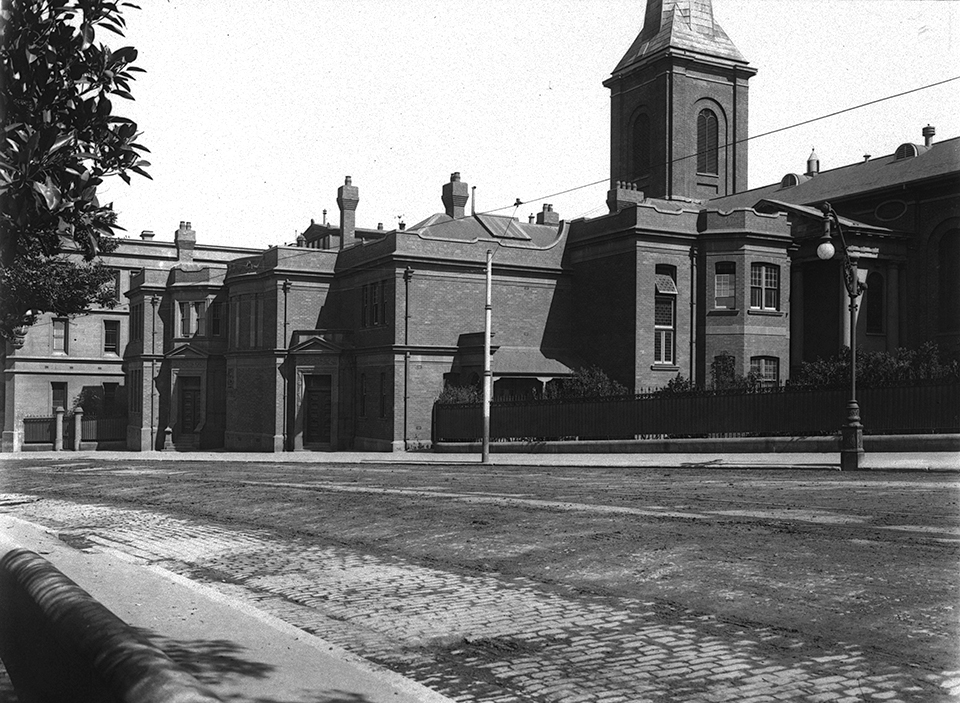 Following the [media]completion of the Law Courts Building in Queens Square in 1977, the King Street buildings were modified for the District Court of New South Wales, which occupied the site until 1994. The Supreme Court of New South Wales subsequently resumed occupation for criminal jury trials, and the complex of buildings, now known as the King Street Courts, was progressively restored and refurbished. 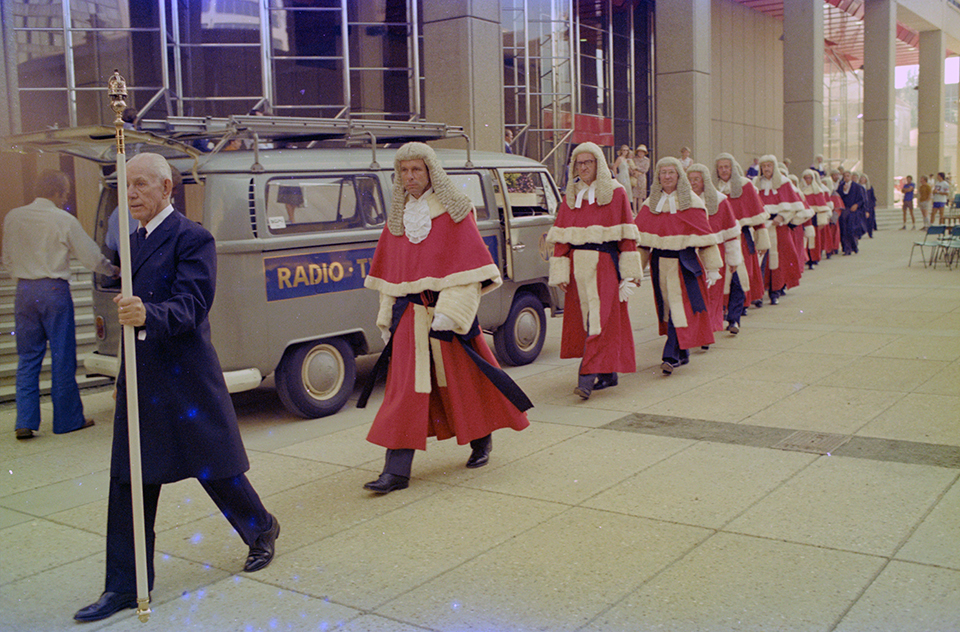