Kurraba Point, a headland located in the North Sydney local government area, on the north side of Sydney Harbour between Shell Cove and Neutral Bay, is on the traditional land of the Cammeraygal people. It is a locality, not a separate suburb from adjoining Neutral Bay. It has extensive views of the harbour and the neighbouring suburbs of Cremorne Point and Neutral Bay to the east and west. Kurraba Point is an almost exclusively residential neighbourhood with prime waterfront properties.

Kurraba Point was previously been known as Thrupps Point and Ballast Point, and formed part of Alfred Thrupp's farm. Like many headlands on the harbour, Kurraba Point was quarried in the early days of the colony to provide stone ballast for ships returning to England, as well as stone for buildings in the colony.

The word 'Karraba' or 'Kurraba' is of Aboriginal derivation. A house of this name was built on the tip of Kurraba Point in the 1860s, but it is unclear whether the house or headland was named first. The main access road through the locality, Thrupps Point Road, was renamed Kurraba Road, about 1889, by Walter Liberty Vernon, Government Architect and a resident of the area. Vernon was also an alderman of the Borough of East St Leonards which administered the area.

Kurraba Point was part of 700 acres (283 hectares) of land bought for Alfred Thrupp as a wedding gift by his father-in-law Captain John Piper in 1816. Alfred Thrupp built a cottage near the Hayes Street waterfront, but never occupied it, as soon afterwards he moved to Van Diemen's Land (Tasmania) where he lived the rest of his life. Piper went bankrupt in 1827 and sold all his land, including Thrupp's estate, to Daniel Cooper, a wealthy merchant and land speculator. Cooper's nephew John Cooper was appointed manager of the estate in 1854. Cooper began to offer leaseholds on Kurraba Point and at the head of Shell Cove in the 1850s and 1860s.

Local historian and resident LF Mann recalled that in 1863, when his family came to live at Neutral Bay, there were only eight habitable residences on the eastern and northern side of the bay. These included Clee Villa; Wallaringa, a cottage that was connected to the former quarry, Patrick Hayes's soap and oil factory and associated buildings; Kurraba; Shelcote; and The Monastery, called so because it belonged to Robert Palmer Abbott. At the head of Shell Cove was Honda, designed and erected by architect Francis Grundy.

Industry on the point

A quarry on Kurraba Point (now Kurraba Park) operated during the 1840s to supply stone to Fort Denison. According to Mann, there was a little stone cottage adjacent to the site that had been the residence of the proprietor or foreman of the quarry. He recalled that the last person to work the quarry was called Keogh.

Patrick Hayes acquired the quarry and started a soap and oil factory at the point. Mann remembered:

two large oil boilers which he used – 8 feet diameter by 5 feet deep – were once used by Benjamin Boyd for wool washing purposes at his store at 'Craignathan' at the head of Neutral Bay from whence they were removed with much difficulty on to a large punt and transferred to the Point.

The factory operations were short-lived. Hayes also erected the large house on the hill above the factory and named it The Towers (in later maps it is shown as Ferncliffe). This house was reportedly built solely in concrete and was supposed to be the first of its kind in the colony. The Port Jackson and Manly Steam Ship Company purchased Hayes's former oil factory and The Towers in 1883, and established a large depot and engineering works.

Test bores were put down at neighbouring Cremorne from 1890, and coal was found near a depth of 914 metres. A number of other sites on the northern harbour shore were considered for mining, including Kurraba Point. The New South Wales government granted a lease over 10,000 acres (4000 hectares) under the harbour to the Sydney Harbour Colliery Company. However in 1897, Sydney Harbour Collieries Limited (by then an old company in liquidation) listed for sale the four acres (1.6 hectares) of land they owned at Kurraba Point on which were two houses, Ailsa and Kurraba, as well as the wharf and sheds on the waterfront, leased to the Port Jackson Steamship Company. By this date the new company had acquired land at Balmain for a colliery and commenced mining operations there. George Sly acquired the property and demolished both houses about 1904. In their place he built three new houses, Kurraba, Kenyon and Thurlow, still extant in Baden Road.

Early attempts to commence a ferry service to the peninsula failed in the 1860s, owing to the small population and no established ferry wharf, and it was not until the 1880s that [media]a reliable ferry service was established. After 1900, the Kurraba Point wharf was built in the approximate location of the former private wharf of The Monastery. Nearby at the foot of Hayes Street, another ferry wharf, erected in 1909, served some Kurraba Point residents. During the 1920s, the Sydney Harbour ferry fleet was one of the largest in the world, reflecting the huge numbers of north shore commuters. 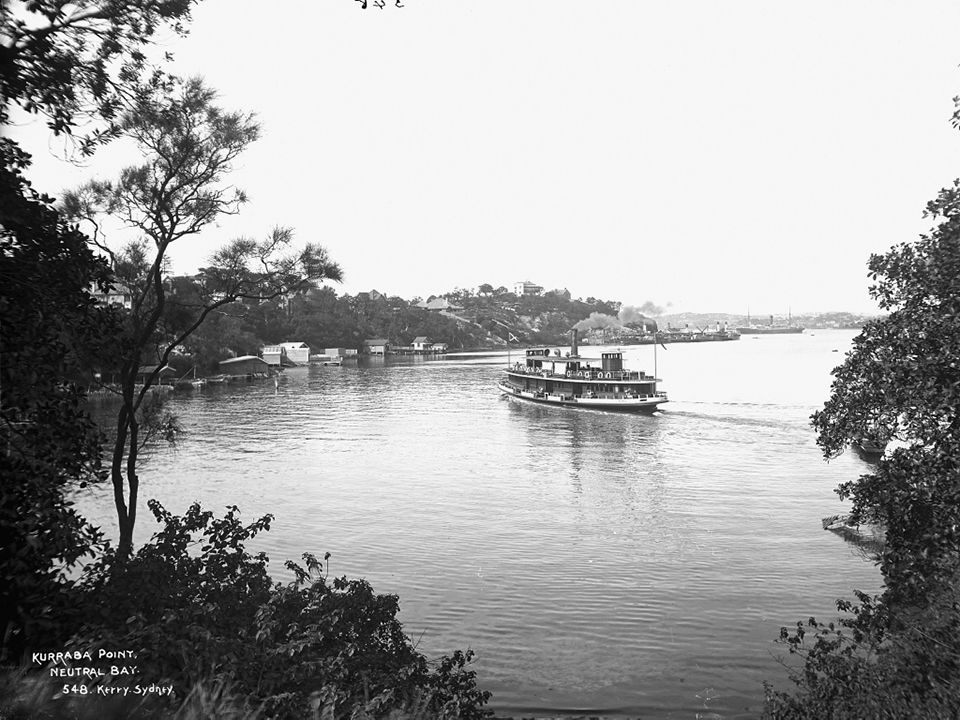 The formation of roads through the Cooper estate and later tram services along Military Road encouraged further residential development in neighbouring Neutral Bay. In 1885 the Cooper family returned to England and the trustees of the Estate continued to further subdivide the former Thrupp's grant into leaseholds. Many of the leaseholds had been converted to freehold by the 1930s.

Housing for the elite

By the start of the twentieth century, Neutral Bay (including Kurraba Point) was a popular suburb featuring attractive homes for the affluent. It was described in the Residential guide of Sydney and Suburbs (1915) as

a delightful watering suburb situated on the northern foreshores of Sydney Harbour, it is surrounded by undulating grassy lawns and gardens, connected with the City by an excellent ferry services from Circular Quay.

Shellcove Road (originally called Shelcote Avenue) became one of Neutral Bay's most select residential addresses, with large architect-designed 'gentlemen's residences' on the waterfront commanding expansive views of the harbour. Architect BJ Waterhouse (of Waterhouse and Lake) designed a number of houses here. Ailsa (33 Shellcove Road) was built for Captain Robert Craig in 1908, and was one of the first buildings Waterhouse designed after entering private practice. On land next to Ailsa, Sydney financier Major Joseph Henry Evans Booker commissioned Waterhouse and Lake to design a house for him in 1914. Brent Knowle, an impressive Federation Arts and Crafts style house, was later sold to Herbert E Pratten about 1917, and given its present name after a district near Bristol, England where the Pratten family originated.

Other impressive architect designed residences that appeared in Kurraba Point in this period include St Ange (13 Shellcove Road), St Anne's (37 Shellcove Road), Keynsham (29 Shellcove Road), Gundimaine (39 Shellcove Road) and The Cobbles (49 Shellcove Road). Along Kurraba Road, two members of the Spain family (of Wallaringa) settled in adjoining houses. Gingie (176 Shellcove Road) was built in 1906 and from 1911 was the home of Commander Staunton William Spain, while next door (174 Shellcove Road) his brother, noted architect Alfred Spain, designed and built Waione in 1904. One of the most prominent and striking houses on the point, Hollowforth, was designed by Edward Jeaffreson Jackson for Professor Richard Threlfall. It was built in 1892 in Kurraba Road on land purchased from Alexander Oliver, builder of Shelcote. The popularity of the north shore as a place of residence had been strengthened by the Garden City Movement and by improvements in communication with the southern side of the harbour.

Ernest White, owner of noted racehorses including Mollison which beat Phar Lap in several races, purchased five houses and a large parcel of land on the tip of Kurraba Point from Dr George Sly, a prominent solicitor and founder of legal firm Sly & Russell, for £30,000 in about 1929. White subsequently subdivided the land and created the Kurraba Point Estate. Unfortunately, White's vision of turning his estate into a neighbourhood housing the exquisite homes of some of Sydney's most influential citizens was stymied by the Great Depression. Eventually White erected a group of apartment buildings on his land at the end of Kurraba Road and also his own home, Baden House, at the tip of Kurraba Point directly facing south over Sydney Harbour.

Flats come to the point

By the early 1940s the low-scale residential character of Kurraba Point was being eroded by the construction of residential flat buildings. A group of longtime residents lodged a petition to council in 1941 seeking to preserve the single residence character of the district. The Building Surveyor acknowledged in his report that a large number of flats were already erected in the district but that some of the properties had large blocks likely to be subdivided in the future. Council acceded to the petition and resolved to declare Kurraba Point a residential neighbourhood. Buildings containing more than two home units, or designed for occupation or use as more than two separate domiciles, or more than two storeys, would generally not be permitted in this area.

A number of building applications lodged in the 1950s and 1960s tested the council's resolve to prevent large apartment buildings, especially on the foreshore. The redevelopment of Shelcote was refused by council, as a proposal for 41 flats was considered an overdevelopment of the site. Some were approved, such as the unfortunately named Maralinga. This block of 64 flats at 145 Kurraba Road was erected in 1963 by developers RALIM Properties Limited and touted in building magazines of the time as the epitome of 'bachelor flat design'.

Unsold allotments in Ernest White's Kurraba Estate were resumed by North Sydney Municipal Council in 1936–37 for Kurraba Park. Overlooking Sydney Harbour is Spain's Lookout, containing remnant 1937 furniture and depression-era work scheme elements such as the concrete fences and paving. This lookout was named in honour of Alderman JS Spain in 1937 for services rendered to North Sydney and the long association of his family with the district. His father, solicitor Staunton Spain, had settled in Neutral Bay at Wallaringa, where his ten children were born. The adjoining Hodgson's Lookout is probably named for Alderman RL Hodgson, Mayor of North Sydney 1932–1934. Below, on the Neutral Bay foreshore, the historic Kurraba Point ferry workshops were closed by the end of 1964, and additional lay-ups were established for the company at Balmain. The state government purchased the site and established the present foreshore park in 1974.

Since the 1950s, most of the original subdivisions have been further subdivided, often several times, to provide for infill housing. This has resulted in the original housing stock being wedged between layers of development and isolated from water and street. The houses on Kurraba Point are generally oriented to face the views rather the streets and since the 1980s a number of medium to high-rise flat buildings have been constructed. Apart from Honda, very little of the nineteenth-century building stock has survived.

'Gem of the Harbour: A Walking tour of Kurraba Point', North Sydney Heritage Leaflet Series No 35, available at http://www.northsydney.nsw.gov.au/resources/documents/35_KurrabaPoint.pdf