Working with the Justice and Police Museum archive

Our Sydney pictures are as ordinary and wondrous as they are awful. With their concussive stillness these images offer glimpses of lives you can almost remember. You can sense in these crime scenes a power that hums out of the past and makes an everyday city that is soulful and reverberant. A city with more blood and spirit than our perception usually lets us see. [1]

Life After Wartime (LAW) [2] was spawned when Ross Gibson [3] was alerted by curator Peter Emmett to the existence of a huge collection of crime scene photographs stored at the Justice and Police Museum in Sydney. [4] Before coming into the safekeeping of the museum, the photographic collection was repeatedly salvaged from flood, relocation and the duress of overwhelming police workloads. As a result, the police and court reports explaining the cases have been lost. All we have now are the pictures, plus some notes originally jotted on envelopes containing the negatives: the name of the police photographer, the nature and location of the scene being investigated, and the date.

We don't know the 'back story' to the crimes; the stories or circumstances of the victims and perpetrators are also unknown to us. Even the eventual legal definition of the crime is uncertain – for the notes on these envelopes represent only the [media]initial speculation of the forensic detectives. We could have cross-referenced the crimes with newspaper reports to fill in this background, and indeed we did ask some of the retired detectives when we interviewed them. But for us, as media artists, this is one of the main attractions of the collection: we are intrigued by the nature of the photos as 'open texts'. As Gibson has said: 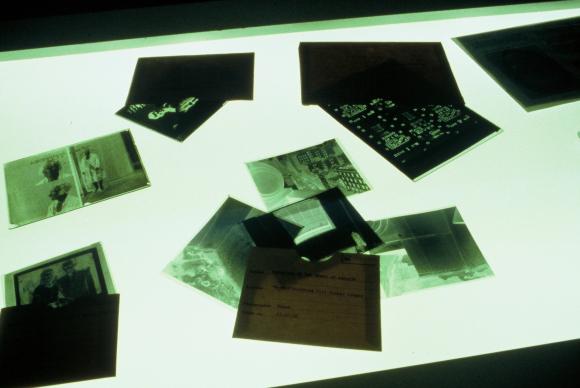 We have nothing conclusive to tell about these pictures. But their richness, verging on sacredness, still shines through. Because they prompt speculation about a vast and vital range of human issues, we are compelled to come up with stories for them. [5]

An archive within an archive

We became particularly intrigued by photos taken during the period 1945–1960. We created our own archive from within the larger collection by extracting several thousand images, taken by forensic detectives in Sydney, many of them ex-servicemen previously engaged in technical, visual work as radar operators, gunsight adjusters, mapmakers and air traffic controllers. During this post war period, as forensic photography was beginning to focus on crime scenes rather than portraits of victims and criminal and before in became formulaic, there was a period of experimentation, of testing the graphic, aesthetic and evidentiary powers of photography.

The crimes represented in our archive are metonymic of, and typify, the aftermath of World War II that so informed our parents' lives, the society into which we were born, and our childhood consciousness. Thus the project title: 'Life After Wartime'.

World War II wrought both broad and subtle societal and economic changes in Sydney, itself a busy international port with its own violent nineteenth century story. There was a shift in ideological, economic and political allegiance from the 'old world' UK to the 'new world' USA; there was also an emphatic influx of displaced refugees and invited immigrants. The suburbs sprawled and there was a developing consciousness of the greater, complex and very dynamic world beyond the shores of the island continent, itself only recently formed as a federated country and in the midst of a very conservative, bigoted and insulated era.

And of course the war impacted on Sydney on another, micro scale: in the physical and psychic scars of the survivors, who brought their experiences and changed consciousness to the wealthy harbourside suburbs and the inner city; to Chinatown, the industrial port areas, the garden suburbs and to the edge of town. The city pulsed with emotions, scams and unruly behaviour learned during the war – refusals of staid civility.

The photographs in our archive of this turbulent and changeful period cover about 300 crimes, ranging from drug use, autoeroticism, murder, sexual assault and car accidents, to bestiality, suicide, train derailment and robbery.

The forensic detectives who took these photos used their intuition, experience and technical ingenuity to document and interpret the site, to uncover the vestiges of a mean or desperate act, to map the collisions of force, passion, folly and desperation at the root of a crime.

Moving into the space from perimeter to interior, the detectives would collect physical evidence and take photographs as they went. In this way they were creating a speculative representation of their first intuitive response to the crime scene. A dataset they would work with for months or years – interrogating, recombining, re-examining until they presented the case in court. A scene may be covered by as few as two images or as many as 25. Interestingly, the ideal method was to shoot the photos without shadows and with a very great depth of field, so as to show as much detail as possible – technically 'objective' images, without internal emphasis created by lens or shadow.

The five projects in the Life After Wartime suite are responses to the images, texts, hundreds of sound files and to the innate nature of the archive as a database. We understand data as being non-material – it is abstract and ethereal. Freed from the constraints of the analogue archive, digital data can be mapped onto anything with the potential for being inscripted or imprinted. Treated as data, this archival material only has a tangential relationship to the subject that was recorded and quantified during data collection – we make the data reflect its own behaviours and our abstract thought, not those of its 'content'. The data mass can behave as one but will also be comprised of its components, each exhibiting its own behaviour. [6]

There are five projects within the LAW suite: each utilising different computational, metamorphic and design strategies to prompt specific user or audience affect.

Crime Scene is an exhibition of approximatley100 prints plus a mini database of images and research texts, a soundscape, an interactive touch screen with several hours of some detectives' oral histories in which they talk about methodologies, specific cases, their careers and the impact of the work, and a portal to six contemporary forensic websites. [7]

The Life After Wartime cd-rom is a story engine that encourages the player to choose images and their ascribed texts. The choices made by the player influence the consequent flow of images and texts. The player builds up their version of an open metanarrative that is loosely woven around twelve characters and locations in an unnamed portside city just after World War II. There is no final narrative resolution or closure; each player constructs their own version of the metanarrative by the sequences they create.

LAW live with The Necks is a performance piece staged with jazz minimalists The Necks, which explores the intuitive interplay between improvised storytelling and The Necks hypnotic, improvised musical compositions. [8] We have performed LAW live five times, including twice at the Sydney Opera House.

Bystander, still in development, is an immersive multi-channel installation that explores emergent ecologies of narrative and aesthetic behaviours.

Life After Wartime is significant in bringing previously 'lost' images into the public domain. The images capture a startling record of life, death and folly, reflecting a period of great turmoil, repressed yearnings and violent outbursts. They help us to understand the deeper spiritual and metaphysical aspects of a traumatised society. This is one of the humanising aspects of the project. To meditate on and create art from the uncensored history of this unruly almanac is to be made aware of the power, strangeness and vulnerability of human life, and the need to make sense in some ways of its infinite capacity for aberration.

[2] LAW is a suite of multimedia artworks created since 1999 by me and my collaborator Ross Gibson and our production team Aaron Seymour (graphic designer), Greg White (programmer) and Chris Abrahams, composer. It is documented at the website: http://www.lifeafterwartime.com

[3] My collaborator, Ross Gibson is an historian and writer, of both essays and novels, and he has written approximately 1500 original short texts for Life After Wartime in response to his background historical research.

[7] This is no longer online but it provided an effective contrast with the culture and processes of post war forensics. Of course, today there is extensive use of 3D modelling in crime recreation, and the industry is partly private sector, at least in North America

[8] The work explores the formalist riddle of synaesthesia – how can aesthetic principles mysteriously and productively migrate from one medium to another? While this has been of interest in the West for years and is fundamental to many devotional improvisation traditions in the East, modern computational processes enable us to apply musical theories to live, visual sequencing and minimalist linguist storytelling