St Mary's Cathedral [media]is built on the oldest continuous site of Catholic worship in Australia. The first St Mary's was built on land given to the church in 1820 by Governor Macquarie, who had been petitioned by Father John Joseph Therry for a site for a Catholic chapel. The site chosen was on the edge of town, close to the convict barracks and convict garden. Macquarie laid the foundation stone in October 1821. Its orientation meant the Cathedral was built facing north–south, rather than east–west according to church tradition. The church was to be designed by Francis Greenway, but Therry wanted something more elaborate than the simple design he proposed. 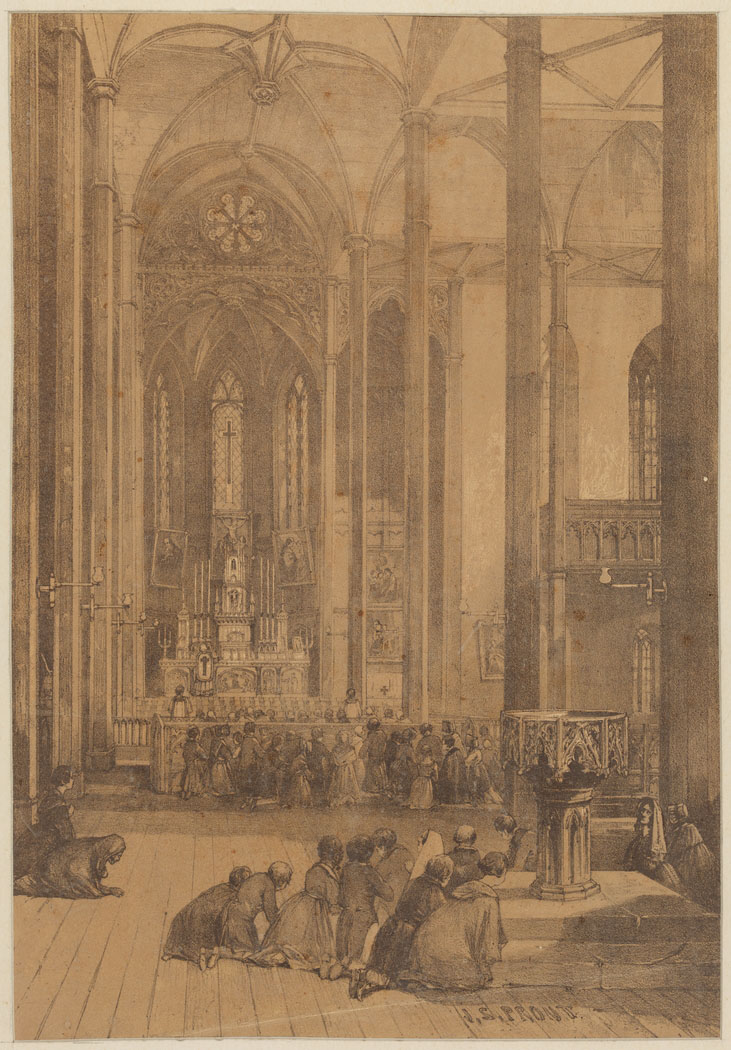 Although Therry worked tirelessly raising funds for the construction of the church, the first church had no roof until 1831 and the first mass was celebrated in December 1833. In 1835, with the arrival of Bishop Polding, Australia's first Catholic bishop, the church was elevated to the status of a cathedral.

The [media]church complex had developed between 1822 and 1828, with the construction of a number of associated buildings to the north-east of the church. During this period the site contained St Joseph's Chapel, two presbyteries (or clerical apartments) and a school building. St Joseph's Chapel was used for services while the main church was being built, and was later converted into part of a Benedictine seminary on the site. [1] 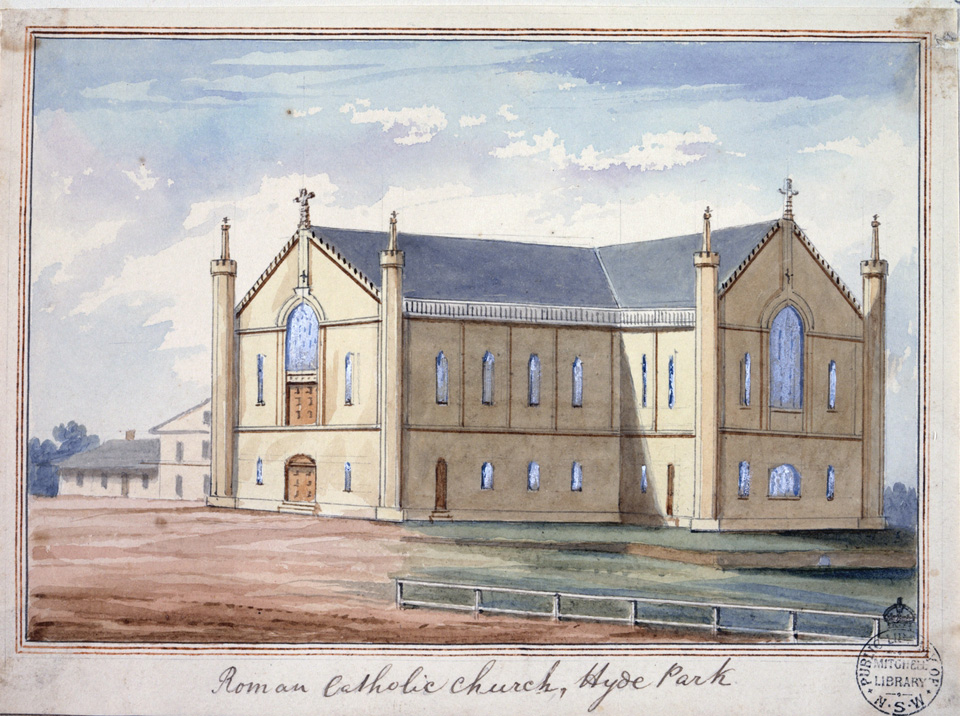 St Mary's itself, once opened, was also added to from the 1840s: an Augustus Pugin-designed belltower was erected in 1843 with a peal of eight bells. A chapter hall, replacing the first school, was started in 1844, also of Pugin design. This remains the oldest building on the site and the only one designed by Pugin. Other additions included a cloister connecting the cathedral and the seminary; a new chapel of St Felician; a sacristy; offices and basement apartments; a library and reading rooms. In 1847 the site was extended with two additional land grants, one to the north and one to the east. A new façade and bell tower on College Street, also to Pugin's design, were added between 1851 and 1857.

All [media]was lost on the night of 29 June 1865 when fire destroyed the cathedral, leaving only the Pugin façade and belltower and part of the north-east transept. 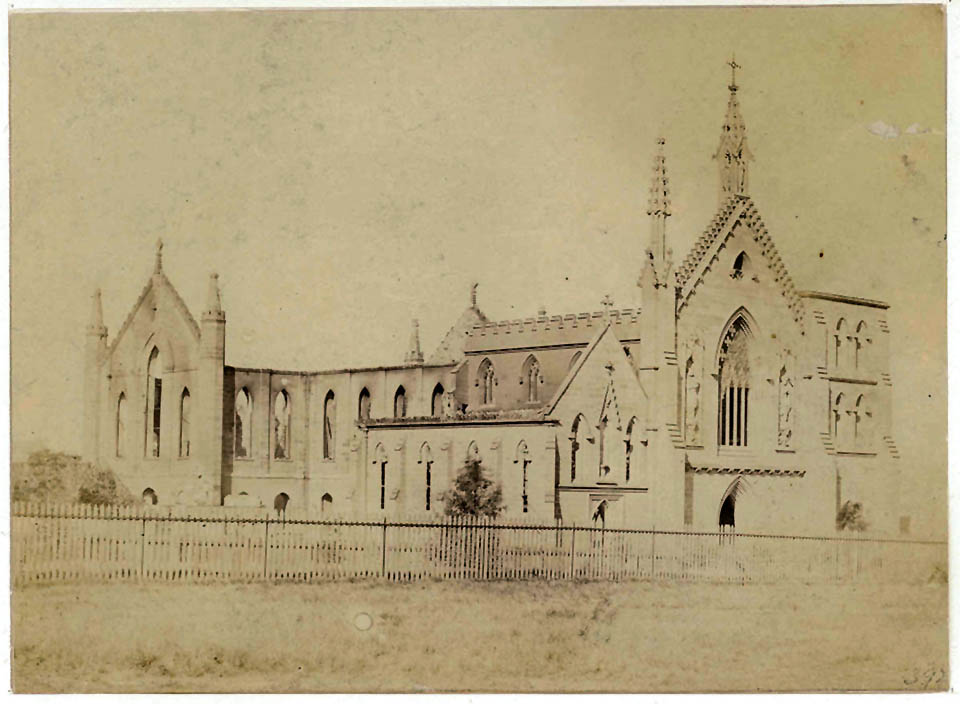 Plans for the construction of a new, larger cathedral were immediately put into place, with Polding approaching the architect William Wardell in October 1865 to design a new building. Wardell, a friend of Pugin's, had arrived in Australia in 1858 and had built a reputation for his grand Gothic-revival style, which he used for the new St Mary's. The foundation stone for the cathedral was laid on 8 December 1868, and the rest was built in sections until 1928. Until the first section was opened, services were held in a pair of temporary timber buildings and then a brick 'pro-cathedral' from 1869. [2]

The first section was consecrated in September 1882. The cathedral was officially opened in September 1900 and consecrated in 1905. It was described by Sydney's Archbishop, Cardinal Patrick Moran, as a gift from the poor, as they had donated most of the money raised for its construction. [3] The first parts to be completed included the northern sections, north window, the bell tower and transepts.

In 1913 the [media]foundation stone for the final southern section, including the nave and the towers, was laid, and the final ceremony for the completed cathedral was held in 1928. The original design of the cathedral towers included spires, but the spires were not completed until August 2000, 135 years after construction commenced. [4] 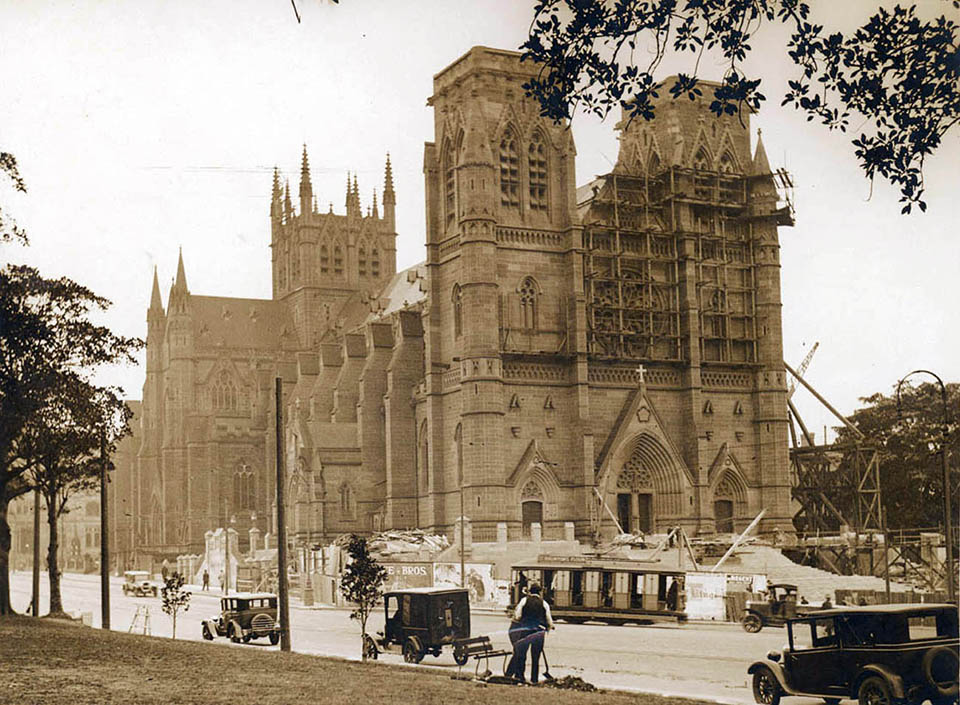 In 1910 the former pro-cathedral was demolished to make way for a new school building, including two schools, one for the Sisters of Charity and one for the Christian Brothers. This building was itself demolished in the 1980s, for a new complex of school and administration buildings.

When completed, St Mary's Cathedral came to represent the solidarity of the Catholic community in Australia. The cathedral is the seat of the Archbishop of Sydney and the mother diocese of Australia, and remains the largest ecclesiastical building in the English Gothic style in the world. [5]