[media]The statue of Queen Victoria that stands outside her largest Australian memorial, Sydney's Queen Victoria Building, was originally installed in Dublin in 1908 as Ireland's principal memorial to her. 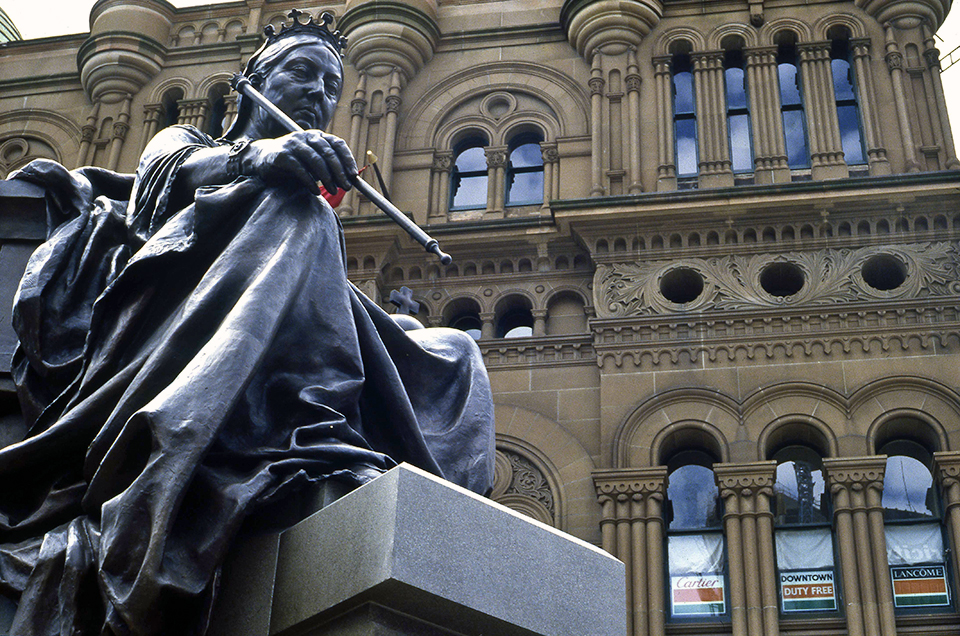 Queen Victoria's jubilees in 1887 and 1897 produced legions of loyal memorials to her. Ireland did little until the Queen's tour of Ireland in April 1900 prompted the Royal Dublin Society to propose a national monument to her. Her death nine months later spurred a second burst of enthusiasm.

However, Ireland's contentious place within the United Kingdom meant the project had to work around contemporary politics. And the seven years the memorial took to be installed saw Ireland's political complexion undergo a great change.

The [media]statue shows an effort to portray Victoria Regina as the 'Irish Queen' rather than the 'British Sovereign'. She is seated in a low chair rather than an elaborate throne, allowing the artist to contain the figure within a sphere rather than as a towering pillar. (Other seated examples place her on a high throne.) And she wears a simple coronet rather than the royal or imperial crown. Nevertheless, she holds an orb and sceptre, primary symbols of her sovereignty. Practically every statue of Queen Victoria does. Dublin's (and Sydney's other Queen Victoria, at Queens Square) points her sceptre at the viewer. Most cradle it genially in their arms. 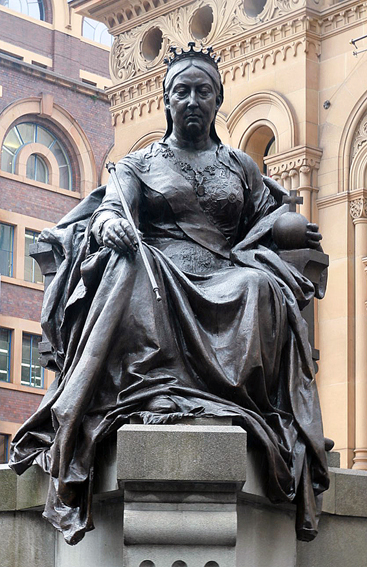 Moreover, the statue portrayed her as the Sovereign Head of the Most Illustrious Order of St Patrick, Ireland's order of chivalry dating from 1783. The star on her left breast, and the pendant badge, feature shamrocks, crowned harps, and St Patrick's Cross. The St Patrick reference probably backfired. It confirmed Ireland's colonial subordination. Round her neck the chain alternates the red and white roses of England.

Other monuments to Victoria sculpted in the late nineteenth century referred to stages in her life or highlighted achievements of her reign. Ireland's Queen Victoria Memorial included three thematic sculptural groups. Dublin's features tried to appeal to Irish hearts and minds. There was 'Fame' (glory achieved through order), 'Peace' (agriculture crowning with a symbol of plenty a worker wearing a leather apron such as a blacksmith's), and 'Erin and the Dying Soldier' (loyalty demonstrated by the sacrifice of Irish soldiers in the Boer War 1899–1902).

All this was the work of John Hughes (1865–1941). Instructor in Modelling at the Dublin Metropolitan School of Art, he executed commissions for state institutions and churches, though some of his work was political. Hughes had done the life-size statue of Fenian writer Charles Kickham, in Tipperary town though his pitch for Wexford's 1798 Rebellion memorial was rejected.

[media]For the Queen Victoria Memorial, his most important commission to date, he shifted his studio to Paris where the statue and allegories were all cast in bronze. In April 1908, the monument was erected in the enclosed courtyard of Leinster House which the Royal Dublin Society had purchased from the Duke of Leinster in 1815. 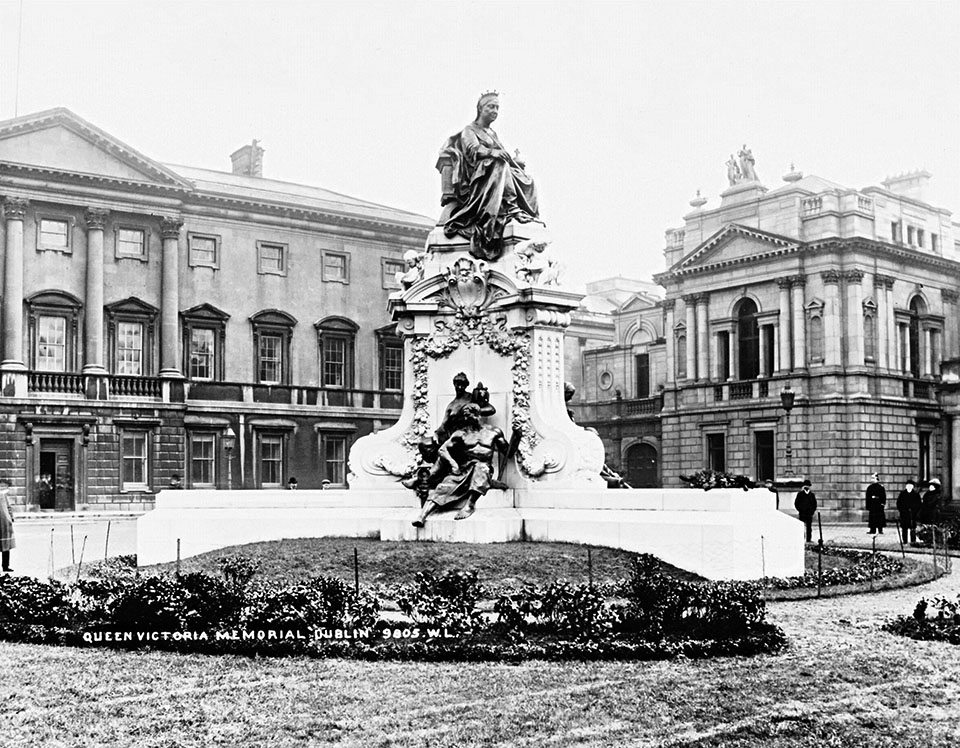 The bronze pieces were positioned on a stone pedestal designed and executed by Hughes himself, so keen was he for the completion of his vision. It was lavishly decorated with allegorical cherubs and floral elements. Unusually, it was in tripartite form to accommodate the three subsidiary figures.

King Edward VII excused himself from the task of inaugurating the memorial. Instead, the Lord Lieutenant unveiled it as Dublin erupted into one of its gala days, with flags and bunting galore, cheering and bands playing. The jollity did not last – not the way events unfolded during the three decades the memorial was in place.

Commissioned at the high-water mark of Irish loyalism, by the time it was installed the idea of Ireland as her own nation was on the march once more.

Professional and technical opinion thought it 'dignified and imposing',

one of the very finest memorials yet erected in the United Kingdom to the memory of the gracious lady who ruled so wisely and well over these realms.

Other responses were critical. Even the artist accepted that he had cast it too large for its confined site. He had expected it to be placed in the wide-open expanses of the Phoenix Park. Hughes also felt that the pedestal's ornate style jarred with the severe Georgian façade of Leinster House and nearby classical Library and Museum buildings.

The removal of the queen's statue

Her fall from grace took an inevitable turn with the advent of the Irish Free State in 1922, which used Leinster House as the seat of the Irish Legislature. Victoria's presence in the changed political space was no longer welcome. The thought of the statue looking down on the nascent Irish legislators, dwarfing passers-by, was too much for some to bear.

Numerous calls to be rid of the memorial came thick and fast after that, though the cost stymied action for 25 years. A Belfast MP in the House of Commons hoped it would be brought to England. The British Government dismissed the suggestion out of hand. Canada, offered it in 1949, declined.

In 1933, Grattan Esmonde TD drove up to Leinster House in a cab and placed at the foot of the statue an extravagant bouquet of rotten vegetables in protest against the Irish government's farming policy. Esmonde had tried to land in Sydney in 1920, as a representative of the rebel Irish government, but was refused permission to leave his ship.

Only when the political ante was upped once more did Queen Victoria take her final curtain. John Costello's coalition government, elected in February 1948, had made known its policy of moving Eire forward to a full Republic. However, nothing formal had been done by July when, to make way for a carpark, a crane wrenched Queen Victoria unceremoniously onto a flatbed lorry.

She was taken to Kilmainham Royal Hospital, then Police Headquarters, where she lingered for decades in the open air until restoration began on the Royal Hospital. In February 1980 the old queen ended up in a grim yard behind a disused children's reformatory at Daingean, County Offaly.

Some years later, Sydney heard about the statue. Neil Glasser, Director of Promotions for Ipoh Gardens Ltd's restoration of the Queen Victoria Building, got in touch with the Director of the National Museum of Ireland, and Sydney's Lord Mayor approached the Irish Ambassador in Canberra.

Wheels turned. In August 1986, Fine Gael Taoiseach, Garret Fitzgerald, authorised the statue's release 'on loan until recalled'. When she sailed away in September, a Dublin paper reported that she was being 'transported' to Australia.

Sydney received only the primary sculpture, the queen herself. A new pedestal was specially made for its antipodean installation. She was unveiled on 20 December 1987, and Queen Elizabeth II visited the site on 4 May 1988. Neil Glasser received an honour in the Royal Victorian Order.

Hundreds of people walk past her daily, without even looking. Those who do think she's been there 'always'. Mike Carlton in 1996 dubbed her 'an unwanted relic'. During the republican referendum in 1999, the statue's orb of state bore a 'Yes' sticker. Backpackers have been seen sitting in her lap.