[media]Rail began in Sydney in the 1850s when a line was built between Sydney and Granville but the North Shore Line, which opened on 1 January 1890 from Hornsby to St Leonards, was Sydney’s first purely suburban railway. 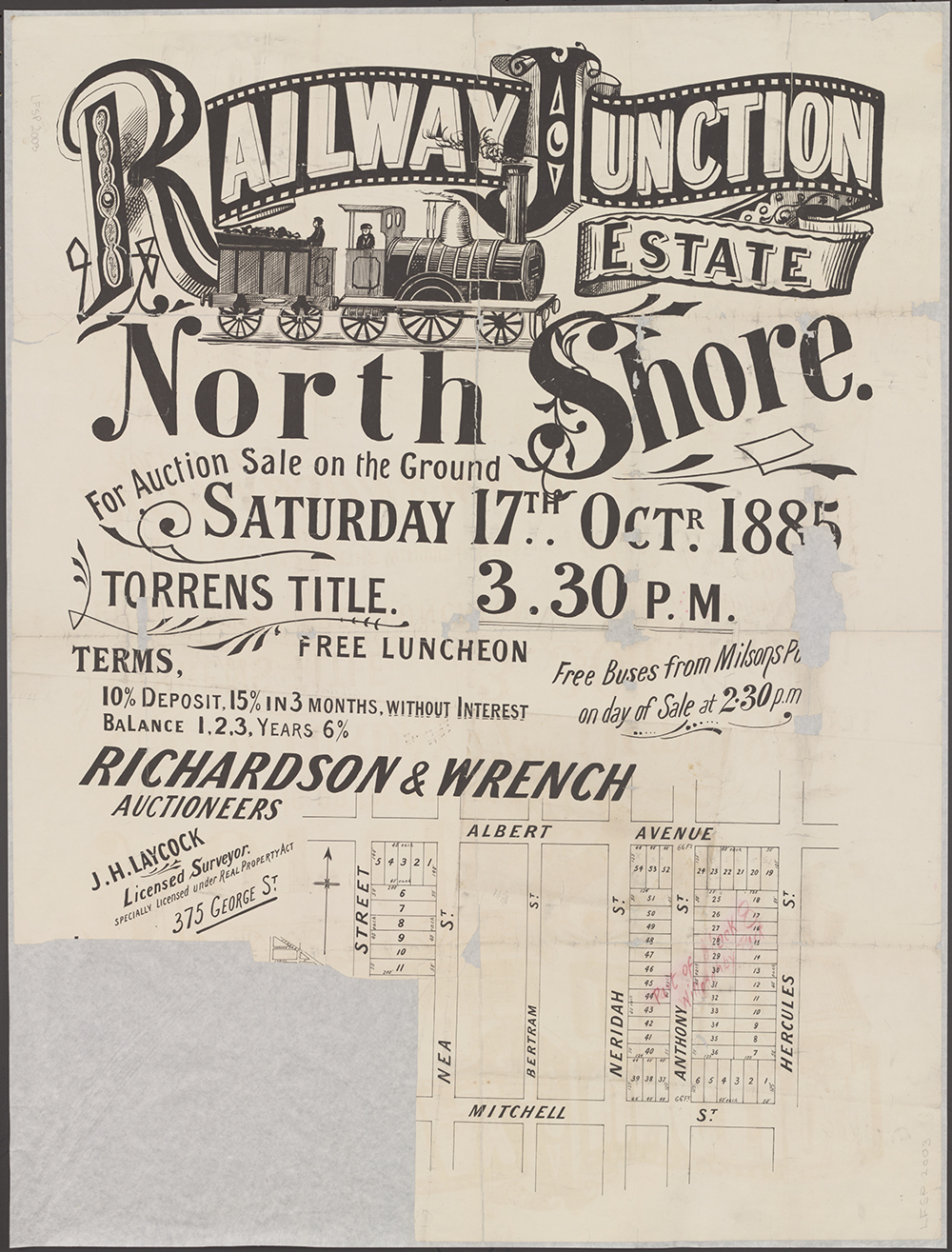 Politics of the Line

[media]In the nineteenth century the New South Wales Parliament was dominated by rural interests who prioritised the construction of trunk railways that would enhance the prosperity of their constituents beyond the Great Dividing Range. The railways carried livestock, produce and, later minerals from the interior into Sydney, for local consumption or export from the state’s principal port. This helped fuel a dramatic increase in Sydney’s population. In 1861 the population of Sydney was just 56,000. By 1881, the city’s population was 221,000 and even though growth was stifled by the depression of the 1890s, Sydney had nearly 500,000 residents by 1901.[1] 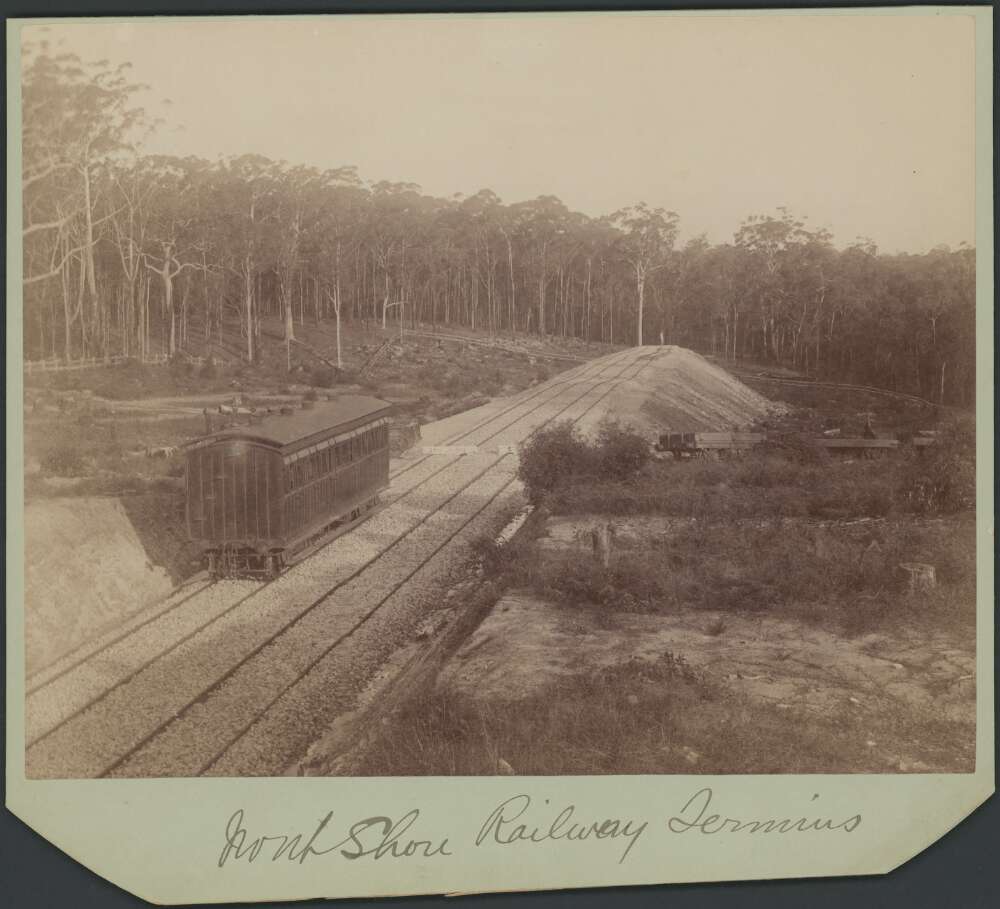 Pressure to build suburban passenger lines was fuelled by a boom in property speculation between 1870 and the late 1880s by city-based land developers. Among the early lobbyists were the English migrant Richard Hayes Harnett, who had moved to the Municipality of Willoughby in 1860, and his partner, Scottish-born Alexander Stuart, then colonial treasurer and later premier. Harnett and Stuart had developed an estate in Chatswood in 1875 and, together with Michael McMahon, mayor of Victoria (now part of North Sydney Council), they lobbied for a railway that would connect their investment with Sydney Harbour at Milsons Point. Numerous land speculators further north were also lobbying for the line to serve their sub-divisions. The government held firm to its policy and resisted lobbying.

At the election of October 1885, Henry Parkes reconsidered his 1884 resignation as premier and stood for the seat of St Leonards against his replacement, George Dibbs. Parkes’ key campaign promises were a bridge across Sydney Harbour and a railway line from Pearce’s Corner (Hornsby) to Milsons Point. These ambitious promises brought electoral success and when Parkes became premier for a fourth term in January 1887, he appointed his long-standing colleague, Bruce Smith, as Secretary for Public Works. Smith moved quickly to approve the line and the tender for its construction was issued in July 1887. A harbour bridge would be a longer term project!

[media]David Berry, the main landowner along the proposed route to Milsons Point, opposed the project so the initial tender was for a 10-mile, 69 chains line from Hornsby to St Leonards. The successful tenderer, on 1 May 1893, was Mr E Pritchard, who established his operating base on a site that would later become Chatswood Station. A formal opening ceremony was held on 10 August 1887, and Miss Annie Thomasine Parkes, daughter of Henry Parkes, turned the first sod in the presence of some 500 ladies and gentlemen.[2] 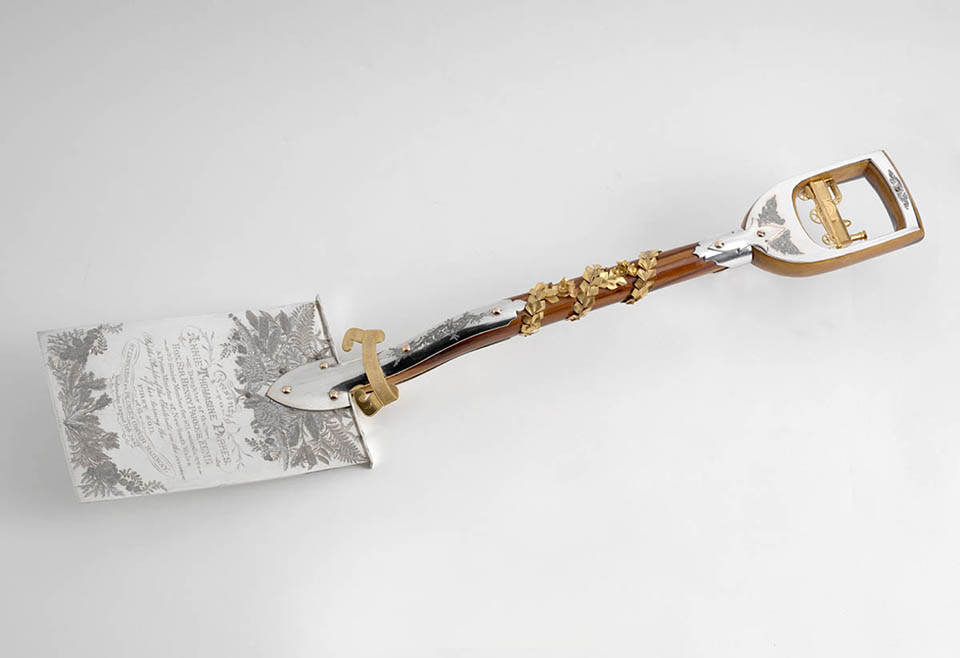 [media]The railway commissioners agreed to construct the Chatswood station on Harnett’s land in preference to a proposed site near Mowbray Road. Harnett showed his appreciation for the decision by naming streets in his North Shore Railway Estate after the commissioners and other prominent railway officials – Eddy, Fehon, Goodchap and Oliver Roads were all named for commissioners, while the former Minister to Public Works John Sutherland and the Railways Engineer-in-Chief John Whitton also had roads named after them prior to the land auction on 19 January 1889.[3] 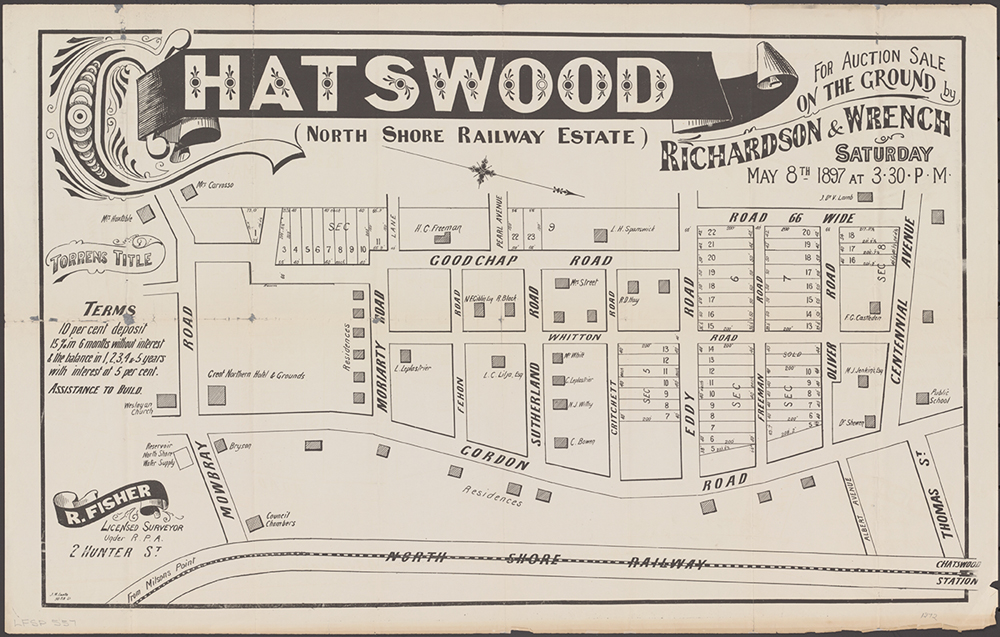 As the colony slid into a deep economic depression in 1889, there was little fanfare when the North Shore Line, Sydney’s first purely suburban railway, opened from Hornsby to St Leonards on 1 January 1890. There were many sharp curves as the line climbed to St Leonards Station, while land developers further up the line lobbied for the line to serve their estates. Four trains a day (and none on Sunday) were deemed sufficient for the traffic offering in the initial years, while passengers relied on horse buses for transport between St Leonards station and the ferry terminal at Milsons Point.

Impact of the Line

[media]The double-track railway extension from St Leonards to Milsons Point opened on 1 May 1893, providing a convenient trans-shipment point with the ferries that crossed the harbour to the city. By 1895, Sydney’s population had reached half a million people, with the majority living in suburbs served by railways. [4] 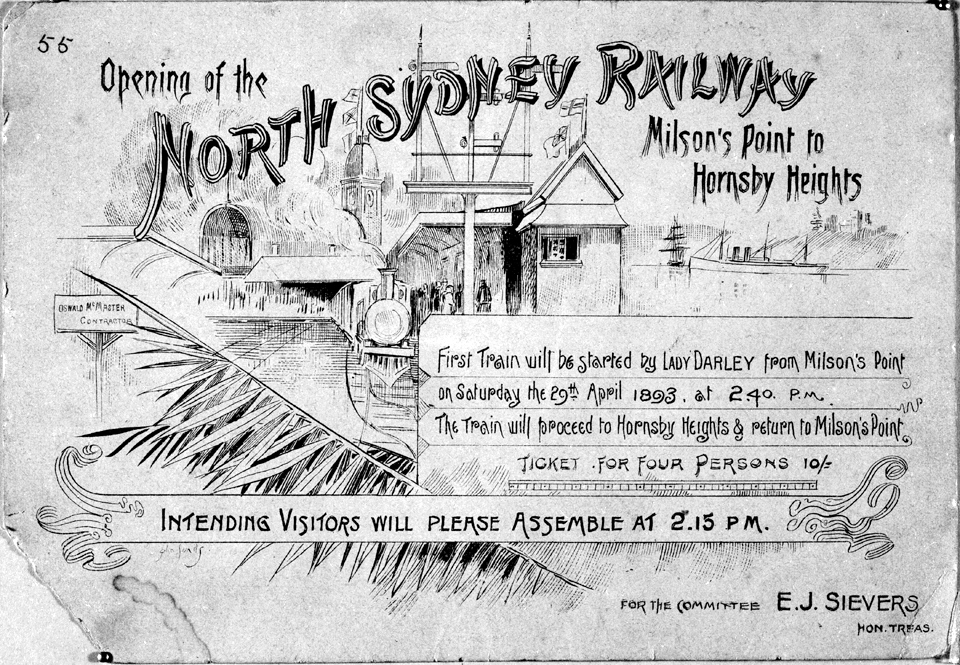 As the economy strengthened in the mid-1890s, land sales boomed in the North Shore estates and there was a rapid increase in population. The population of Willoughby Municipality increased from 3411 in 1891 to 13,063 in 1911 and 24,835 by 1915–16, with much of this occurring in Chatswood. The North Shore Line was duplicated from St Leonards to Lindfield by 7 October 1900 and onto Hornsby by 9 October 1909. This work involved the rebuilding of stations with classic Federation-style brick buildings, although Artarmon had to wait until 12 July 1916 for its brick structure, which was relocated brick-by-brick from the old abandoned Glenbrook Station on the Western Line.[5]

[media]Suburban steam locomotives of the era struggled to maintain schedules in the steep grades on the north shore, making the North Shore line an early priority for electrification. From 1927, the track was realigned and station structures were changed to make way for the wider carriages that Dr JJC Bradfield had selected for Sydney’s electric trains. The new and rebuilt carriages were built up gradually as the track was wired for the new trains, with the first electric services running from Milsons Point from 3 August 1927 and continuing through to Hornsby by 15 July 1929. After the opening of the Harbour Bridge on 19 March 1932, all passenger trains on the North Shore Line operated via Central, Town Hall and Wynyard to the new North Sydney Station, then to Waverton and onwards to Hornsby.[6] 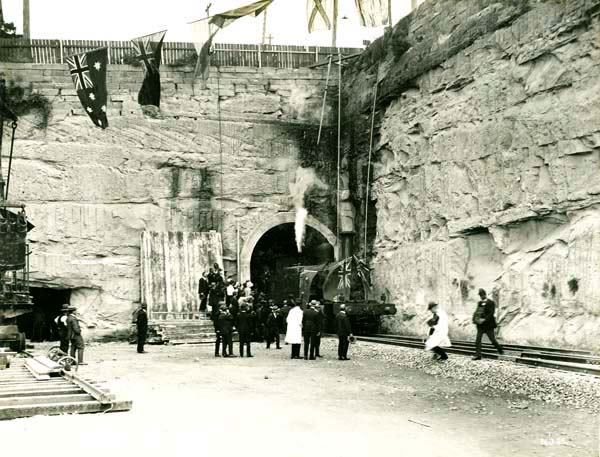 [media]By the 1980s, Sydney’s electric train fleet was still largely comprised of 50 year-old ‘red rattler’ single deck four-car sets. Double-deck trailer carriages were introduced from 1964 and on 6 January 1969, what was claimed to be the world’s first double-deck eight-car electric train, with four Tulloch-built power cars and four trailers, was placed in service. This initial set was followed by double-deck trains built by Commonwealth Engineering and the Newcastle manufacturer Goninan Limited. In due course, Sydney’s electric trains became a double-deck fleet, though by the new millennium the increased power-consumption of more recent trains required a significant upgrade of electricity infrastructure on the North Shore line. 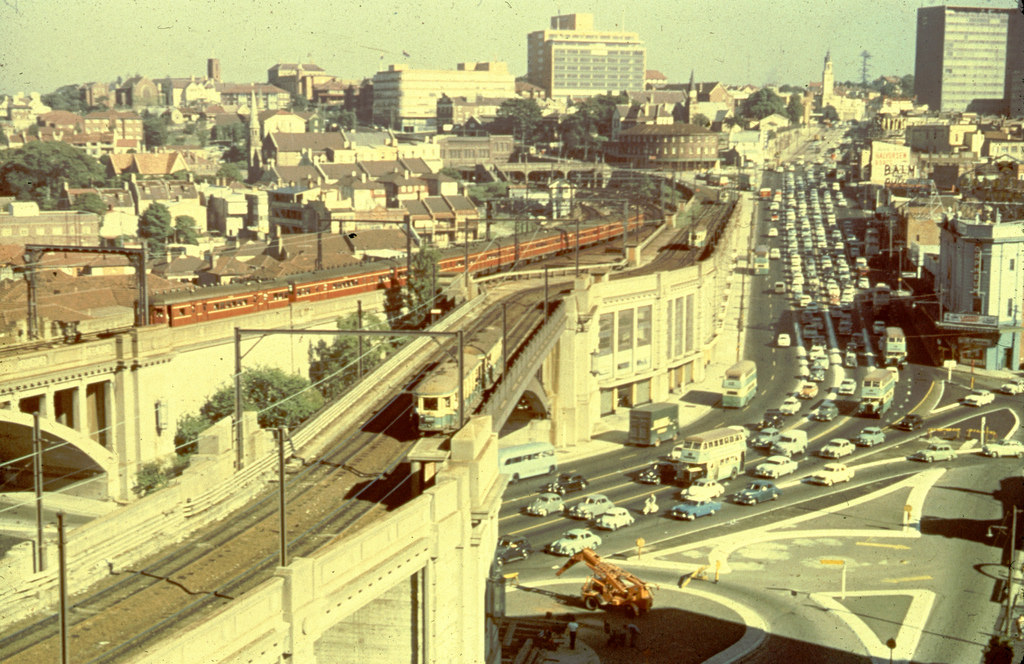 In August 1989, St Leonards Station was closed and services were transferred to a temporary structure further south to enable the station to be rebuilt as part of a high-rise complex. Financial difficulties with the project delayed the opening of the new station until February 2000.[7]

[media]Construction of the proposed Chatswood to Parramatta Line (PRL) commenced with the Chatswood to Epping section in November 2002. It was subsequently decided to go under the Lane Cove River with a tunnel rather than a bridge, while the project required a major rebuild of Chatswood Station. The line opened on 22 February 2009 using Outer Suburban Cars (OSCARS) on the shuttle service as four-car sets.[8] In October 2013, services on the line were integrated into Northern Line schedules. A change of government resulted in the Epping to Parramatta section being abandoned. 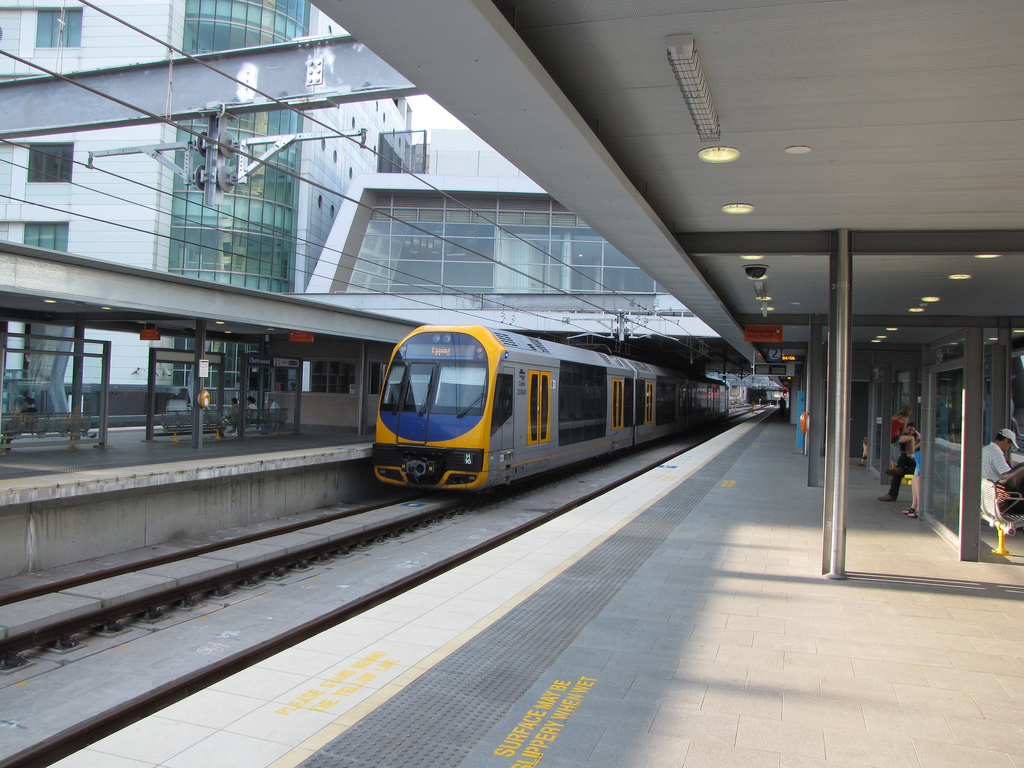 Following the March 2011 election, the new coalition government announced that the Chatswood–Epping Line would be converted to Metro standards as part of the new North West Rail Link to Rouse Hill,[9] with services commencing during 2019.