Iris Webber [media]was a busker, petty thief and sly-grog seller, active in the Sydney criminal milieu of the 1930s–1950s. She was implicated in a number of shooting affrays and gained a reputation for her fiery defences in the courtroom. By the end of her life she was known to have had at least two relationships with women. 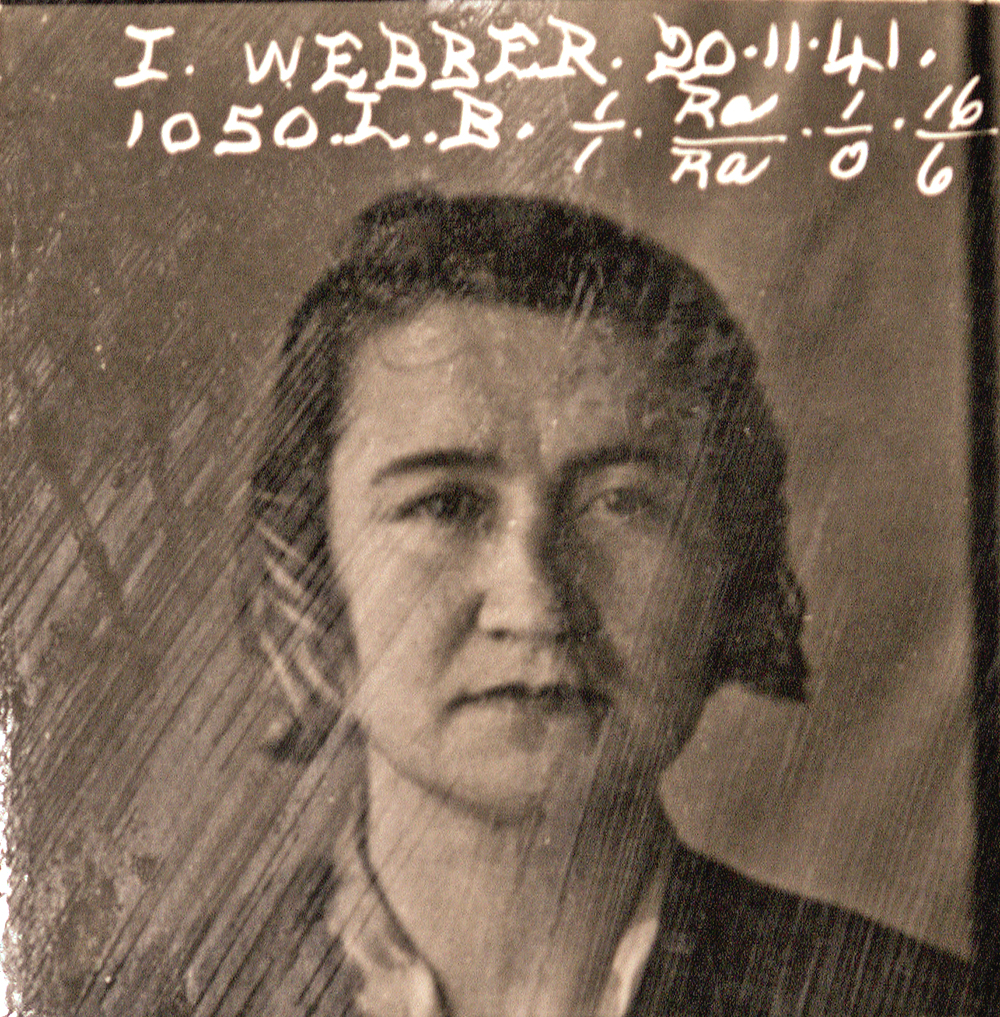 Iris Eileen Mary Shingles was born in Bathurst on 19 June 1906, in the Salvation Army Rescue Home. Her mother Margaret, a servant, spent her pregnancy in gaol doing a sentence for larceny. Iris grew up in Glen Innes and in 1925 married Edwin Webber in Warwick, Queensland. During the worst years of the Depression, thirty three per cent of the workforce was unemployed.[1] The impoverished Webbers went bush to Tyagarah Siding, near Byron Bay.

In 1932 Edwin got a job as a fettler in Hay. He didn't send maintenance for several months nor repay a loan from Iris's mother. Iris went to Hay to confront him. In the ensuing argument, she shot Edwin in the buttocks with her pea rifle. She was placed on remand for two and a half months, then acquitted in one day. Edwin, twenty years older, wasn't hospitalised and didn't testify against his wife.

A year later, Iris was living in Glebe, Sydney. A keen census subscriber since voting age, she would never again appear on the public record except as a criminal. Over the next few years she was frequently charged with gathering alms. She had begun busking with an accordion, an occupation she maintained all her life.

The shooting of razorman and rival Bill Smillie

By 1935, Iris was living at 6 Clisdell Street at the bottom of Surry Hills, a 'locality frequented by drinkers of methylated spirits and criminals of the worst type'.[2] The windows were boarded up, there was no heating, and furniture was made from packing crates. Sanitation was an outdoor dunny and a tap in the common yard. Minutes away on 2 Lansdowne Street was what would soon become sly-grog queen Kate Leigh's main beerhouse. Even closer lived gangster Bill Smillie, who had done five years for a vicious double slashing of rival coke dealers when working for Kate Leigh in the 1920s.[3] Next door lived Kathleen McLennan, whose close friend Maisie Matthews, a prostitute, became Iris's lover. At twenty, Matthews had already accrued a lengthy record since her release from Parramatta Girls' Training Home in 1933.

One night Smillie, also romantically linked to Matthews, was found bleeding on Elizabeth Street. He had been shot in each thigh with a repeating rifle owned by Iris. McLennan claimed responsibility.

Smillie observed customary omerta by refusing to testify. There was the added incentive of humiliation due to injury by a woman. Smillie claimed he was shot by a man, McLennan recanted, and the case collapsed. A later NSW Police Gazette claims Iris shot Smillie over Maisie Matthews. Policewoman Lilian Armfield repeats this claim in Rugged Angel, Vince Kelly's biography of her.[4]

The risks of open lesbianism

Rugged Angel contains a whole chapter on Iris Webber, later known as Furlong. This chapter has informed every version of Iris since. It is more a fulmination against lesbianism than a true picture of Iris. Lesbianism is described as a 'cult', an 'addiction', a 'perversion'. A devout Methodist and notoriously tough, Armfield viewed Iris as 'a horrible woman, a disgusting creature, completely without shame or conscience.' Iris is given the term common then to lesbians, gay men, peeping toms, bestialitists, flashers and paedophiles alike: 'sexual deviationist'.[5]

The mere term 'lesbian' was so dreadful it was scarcely mentioned in the media till the 1960s. Top forensic psychiatrist John McGeorge joined Armfield in urging a Royal Commission into the increasing 'vice' of homosexuality, male and female.[6]

Violence against homosexuals was institutionalised. When interviewed by Larry Writer for Razor, policeman Ray Blissett laughingly recalled bashing 'sword swallowers' (gay men). [7] Policewoman Maggie Baker spoke allusively of how neither she nor Armfield had married. Given the popularity of the job today for lesbians, one may assume the force was never a heterosexual haven. But Armfield hated lesbians and as Iris 'blatantly boasted of her activities as a lesbian' the police gave her no respite.

The shooting of Slim Maley

[media]In May 1936, McLennan and Matthews received eighteen months for a slashing. They were sent to the State Reformatory for Women in Long Bay. During this time Iris was punished heavily for minor charges, eventually spending some days in the 'Refty' herself.

Matthews began corresponding with Alfred (Slim) Maley, also serving time for a slashing. In September 1937, freshly out of gaol, Maley and Matthews moved in together. One night, after a fight, Matthews fled to Iris's place with McLennan. Maley arrived the next day, drunk and threatening. He attacked Iris with a razor, and she shot him with a malfunctioning pea rifle. Maley died the following day. Iris was charged with murder, spent six weeks on remand, then was acquitted.

[media]From late 1938 Iris was arrested five times for busking. Though gathering alms was a minor offence Iris now needed powerful representation. She engaged Harold Munro, a top criminal lawyer who also represented Kate Leigh and Tilly Devine. Munro was himself no angel. During the war he received drink-driving charges and was implicated in homosexual entrapment lurks with two corrupt police officers. 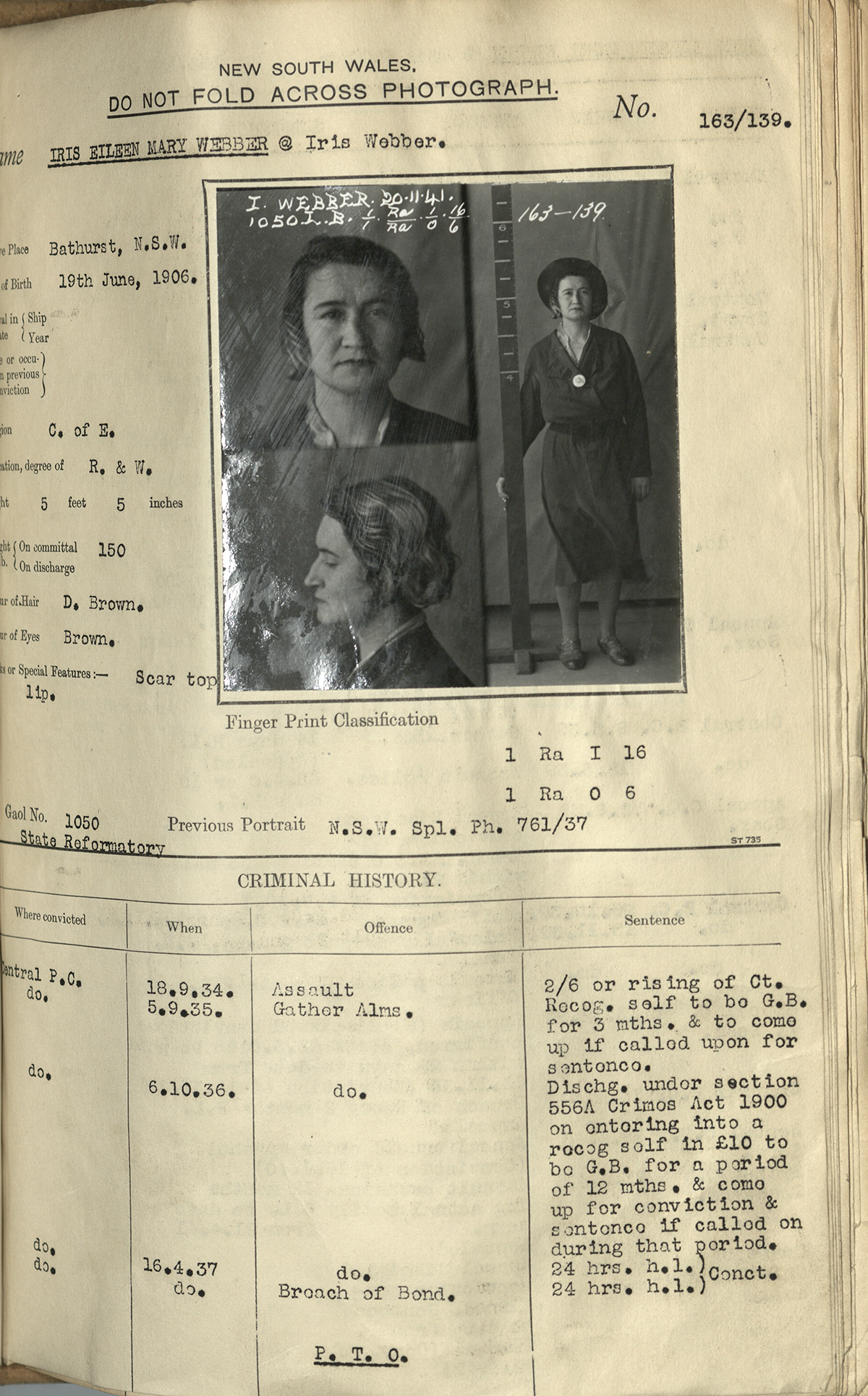 By 1940 Iris was allegedly carrying a knuckleduster. She was placed on remand for a mugging and though acquitted of the theft, spent over a year in gaol for assault. She sacked Munro then conducted her own defence. Her letters from Long Bay are written with a verbal elegance and command of legalese astonishing for someone so poorly educated. Begrudgingly, Armfield describes Iris as having a 'brilliant brain'.[8]

Sly grogging down in Woolloomooloo

Three years later Iris was selling sly-grog from her house in Forbes Street, Woolloomooloo. She was raided eight times in six months then placed on remand for assaulting Jackie Hodder. Hodder was a young standover man with a solid criminal record. He had gone to Iris' house to extort her, and she attacked him with a tomahawk, wounding his hands. Hodder withdrew the charges, claiming a man had attacked him.

A few weeks later Iris married George Furlong, a 65 year-old labourer of meagre means. The police now noted Iris as 'practising the perversion of lesbianism'. [9] Perhaps Furlong was hitched to allay this notoriety. Nevertheless, Iris received six months and a £100 fine, the maximum penalty, for selling a bottle of whiskey. While in 'The Refty' she filed for divorce. By the end of the year she was living back in Woolloomooloo, with her new lover, Vera May Sariwee, in McElhone Street.

[media]Early in 1945 a fatal conflict broke out in Iris and Vera's house. Kathleen McLennan, now known as Millicent Tangga, had come over with Margaret Holmes, prostitute and thief. Tangga and Holmes argued about money, and Tangga shot Holmes, who died later in hospital. Iris spent time on remand for obstructing the case. Tangga claimed it was an accident, and was acquitted. 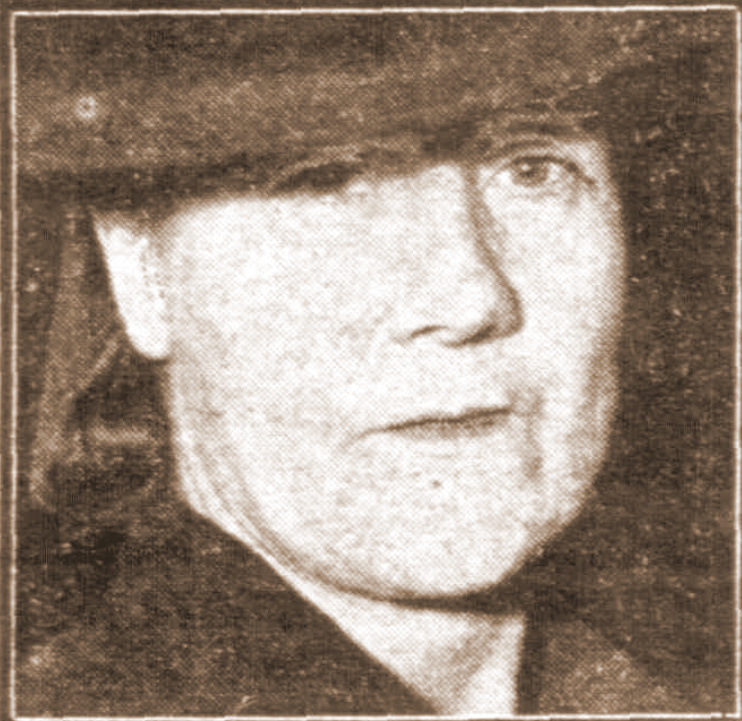 Sariwee and Iris were involved in several robberies together over the next couple of years. Iris began featuring regularly in the Sydney tabloid Truth. She was depicted as scary, outspoken, slightly grotesque, yet often amusing with her courtroom antics. She had become obese, diabetic, and by her own account, worn out.

With Sariwee, Iris was evicted from her abode in 1948. [10] By the end of that year they were living at 29 Pelican Street, Surry Hills. At a 'sing-song' in their room with two small time crims, Stanley Woods and Stewart Mackenzie, conflict arose. Woods came onto Vera, then Iris attacked him. Mackenzie intervened, and Vera attacked him. The weapon again was a tomahawk. When being led into court, Iris showed the judge bruising on her leg from a bashing in the cells received by her and Sariwee. The marks were extensive. The police prosecutor retorted she was 'the most violent woman in Sydney'.[11] Iris, according to Truth, defended herself 'with loquacious aplomb'. The men did not turn up to give evidence, and the women 'romped out of court'.[12]

The most violent woman in Sydney

Since the 1948 court appearance the epithet 'the most violent woman in Sydney' has remained Iris' alone. Her contemporaries Kate Leigh and Tilly Devine used violence as men did, to enforce their will, acquire goods and territory, and maintain order. Both, like Nellie Cameron, were charged with shootings and slashings. Leigh killed at least one man. Tilly, like Kath McLennan and Maisie Matthews, assaulted women as well as men.

For women there was also the imperative of self-defence. Access to voting and tertiary education was recent. A lower-class woman had few options beyond domestic work and prostitution. Violence was the everyday language of the streets. Iris's violence was more retaliatory than Machiavellian, her social status remaining low all her life. It was not offset with glamour and flirtation, or dependence on a man, as with Devine, Leigh and Cameron, and during her last decade at least, Iris was openly lesbian.

In her final years Iris was considered one of the personalities of Sydney due to her obstreperous and strikingly successful courtroom defences. She was also known for her accordion playing, invariably mentioned in depositions. Her last recorded conviction was in 1952 for contempt of court. [13] She died one year later of diabetes and metastasised cancer, aged 47, survived by Vera. Her final abode was a stone's throw from what would soon be Surry Hills Police Station, the largest police station in Australia.

Wendy Lowenstein. Weevils in the Flour: An Oral Record of the 1930's Depression In Australia. 20th anniversary edn. Fitzroy: Scribe, 1998.

[1] Wendy Lowenstein, Weevils in the Flour: An Oral Record of the 1930's Depression In Australia (Melbourne: Scribe, 1998)