In February 1837 the Sydney Mechanics' School of Arts (SMSA) moved into their new building in Pitt Street. Although the School of Arts had been established in 1833, it had no premises. The initial meetings were held in rooms around the city, firstly in the Australian College, and from 1834 until 1837 in rooms allocated in the house formerly occupied by Captain Rossi, Superintendant of Police, at Church Hill, which were provided by the Governor until the School could obtain a site for a permanent home. In January 1836 a lease was secured for a vacant site in Pitt Street adjacent to the Independent Chapel, which had been designed by John Verge and opened in 1830. Tenders were called to erect a Mechanics' School of Arts building in March 1836 and the building was completed in time for the SMSA Annual General meeting on 6 February 1837. [1]

The new building was two storeys, housing a theatre, lecture room, museum and library, reflecting the educational aims of the School of Arts. The theatre occupied the ground floor and was accessed via a centrally placed front door facing Pitt Street, with an internal stair to the first floor library in a corridor running down the southern wall of the building.

Space for the members was an issue from the start, and by October 1838 tenders were being called for an extension to the new building. The addition was designed by John Bibb, a member of the Mechanics' School and a prominent architect in Sydney, with the building work carried out by a Mr Bloomfield. The additional rooms were located to the rear of the main building on the southern edge of the allotment, separated by a breezeway, and were used as reading rooms.

In January 1845, an advertisement appeared in the Sydney Morning Herald advising the public that the Sydney Mechanics' School of Arts building was for sale. The sale notice gave a description of the building noting that the theatre, which also served as the lecture hall, had 30 rows of seats, that the side passage was used as an apparatus room and that the upstairs library included models of art, specimens and subjects of natural history with three windows facing Pitt Street. [2] The sale was proposed to fund the relocation of the school to a new site to allow for the construction of a larger building. It appears, however, that there was a change of heart, for the Committee of the SMSA purchased the building and the leasehold of the property itself, and began planning extensions on the site. By the end of 1845 two additional rooms, used as private apartments for the librarian and reading rooms, had been added at the rear of the allotment opposite the earlier extension.

[media]The need for extra space was a constant issue for the SMSA. In 1852 a petition was presented to the Legislative Council seeking permission for the SMSA to sell or swap a parcel of land set aside for it in George Street South for the purpose of purchasing a site in a more central location. [3] With the funds available the SMSA Committee was able to move quickly when the neighbouring building, the Independent Chapel, was put on the market. Purchasing this site in January 1855 gave the School the opportunity to double the size of its building without having to relocate. [4] With this in mind, a public appeal for donations to fund proposed works was advertised in newspapers from 1856. [5] 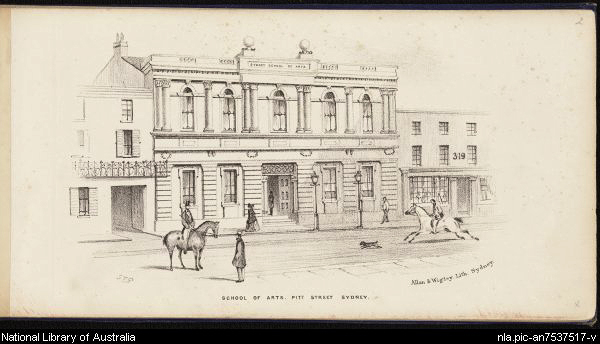 In February 1859 a special public meeting was held to discuss the plans to extend the SMSA building in Pitt Street. The architect John Bibb was once again commissioned and his plans were made available for the meeting to consider. Due to a lack of funds for any major work, it was proposed to proceed in stages with the extensions, with the first being a new façade facing Pitt Street. On 19 December 1859 Sir William Denison, the governor, laid the foundation stone, which included a time capsule. As the original School of Arts building and the Independent Chapel were set back from Pitt Street by approximately 6.5 metres, the foundation stone for the new façade was placed closer to the street front. As the older buildings were not demolished, lessons, lectures and events could continue while building work was underway.

[media]Work began in earnest in early 1860 and the first stage was completed by January 1861, although a mortgage had been required to fund the work. The first stage included the front façade and extensions which housed a new library and reading room on the ground floor and new classrooms on the first floor. This joined the two formerly separate buildings of the old SMSA and the Independent Chapel into one frontage. Internally the walls of the older buildings and many of the internal spaces were retained and adapted, with sections of the John Verge-designed Independent Chapel still recognisable in the building today. The new façade was designed in a Palladian style with late Georgian features such as Corinthian columns on the upper level, round fanlights with keystones, corbelled cornice and interlocking circles with a central panel inscribed 'Sydney School of Arts', all of which are still visible. [6] 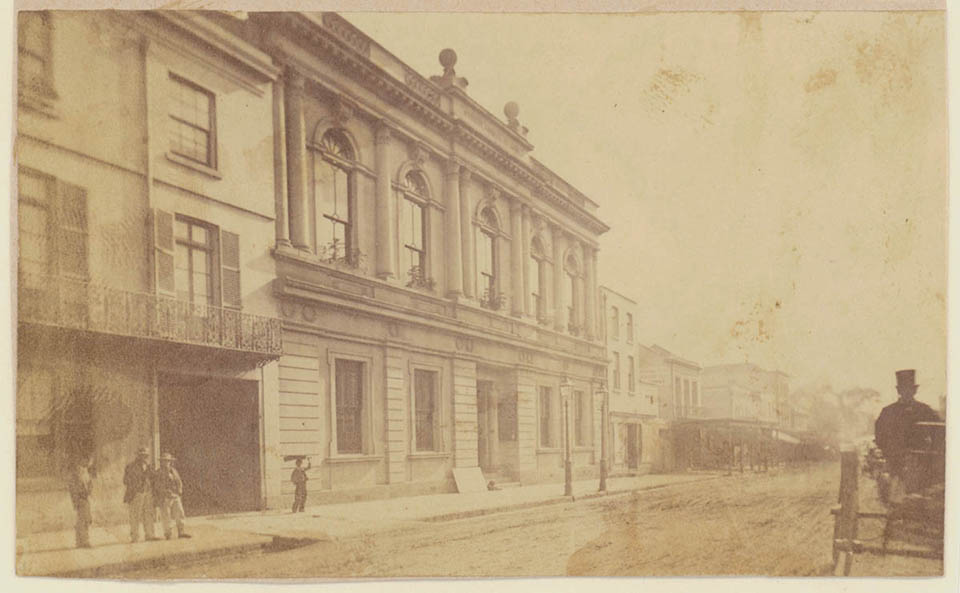 The second phase of building began in late 1861 but was delayed by the death of John Bibb in February 1862. A new architect, William Kemp (he went on to be the architect for the Department of Public Instruction and was involved in the design for the Sydney Technical College), was employed and with some design changes the second phase of works was completed in September 1862, including extensive internal changes to the Independent Chapel to form an enlarged hall with stage and gallery above. [7]

[media]With the building works completed, but with a £2000 debt, classes continued. Ongoing repairs and alterations, such as new skylights to the reading room, lining of walls and ceilings and other works, contributed to costs for the School. [8] 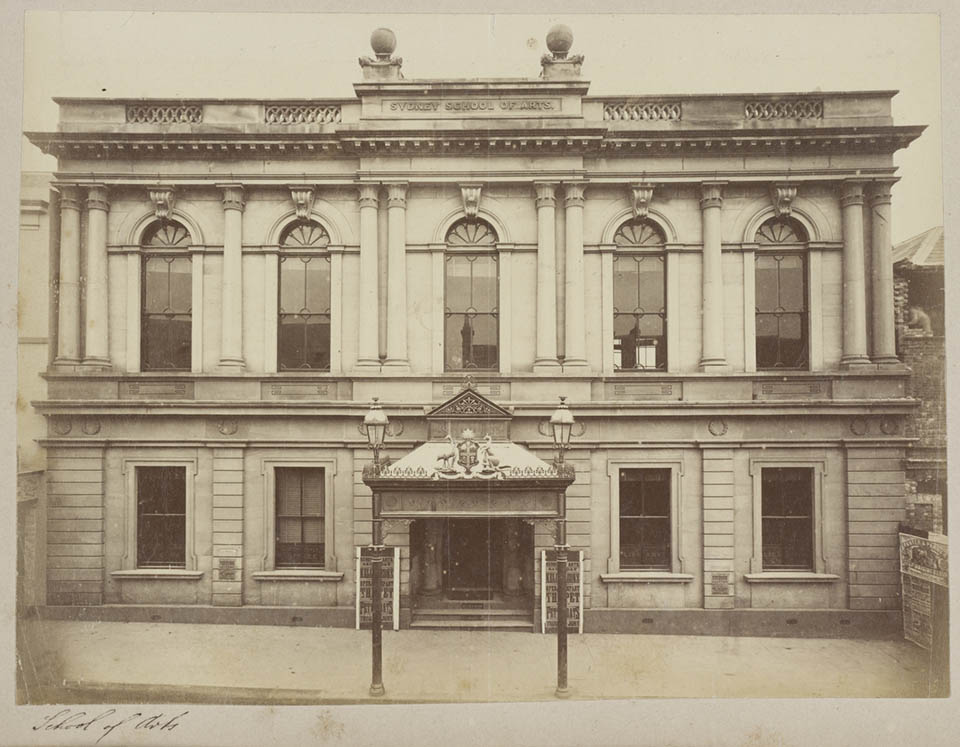 The new building served the SMSA well, providing more room for concerts and performances, larger reading rooms and library as well as updated facilities including new overhead gas lighting. Despite this, some in the SMSA felt that the institution was drifting from its original purpose of educating the working class of Sydney and so proposed the building of a new college. At the annual general meeting of 1873 it was put forward that a new Technical or Working Men's College should be opened to satisfy the objectives of the SMSA. However, a lack of space would require further extensions to the Pitt Street building.

Continuing support for the [media]idea of a college through the 1870s saw work start on the extension in 1877 and continue through to May 1879, when the new college was opened to the public. The college was built at the rear of the Pitt Street buildings on newly acquired land that extended back to George Street, and included a new hall, [media]laboratories, classrooms, offices and a yard area. The college breathed new life into the SMSA, with courses on practical learning attracting workers back to the School. College enrolments rose from 720 in the first year to 1198 in the second, and continued to increase over subsequent years. However lack of space was a perennial issue and college courses were soon being held in other rooms and buildings around the city. In addition, limited funding hampered further increases in the program, and in 1883 the New South Wales government took over the college, transforming it into the basis of a new technical college, which became the foundation for the Sydney Technical College. The Sydney Technical College continued to operate from the SMSA building and other rented properties in the city until it moved to the purpose-built technical college at Ultimo in 1891. 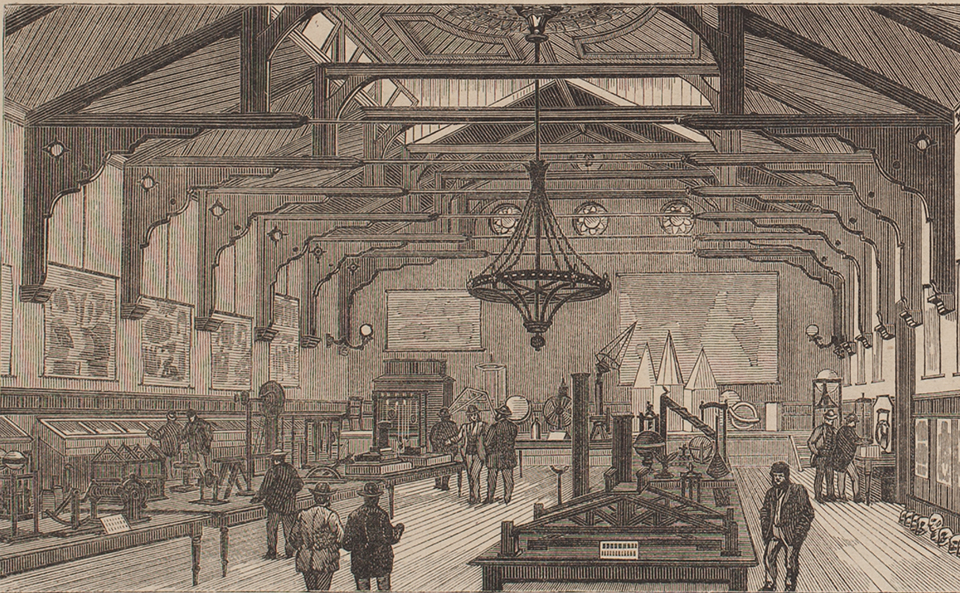 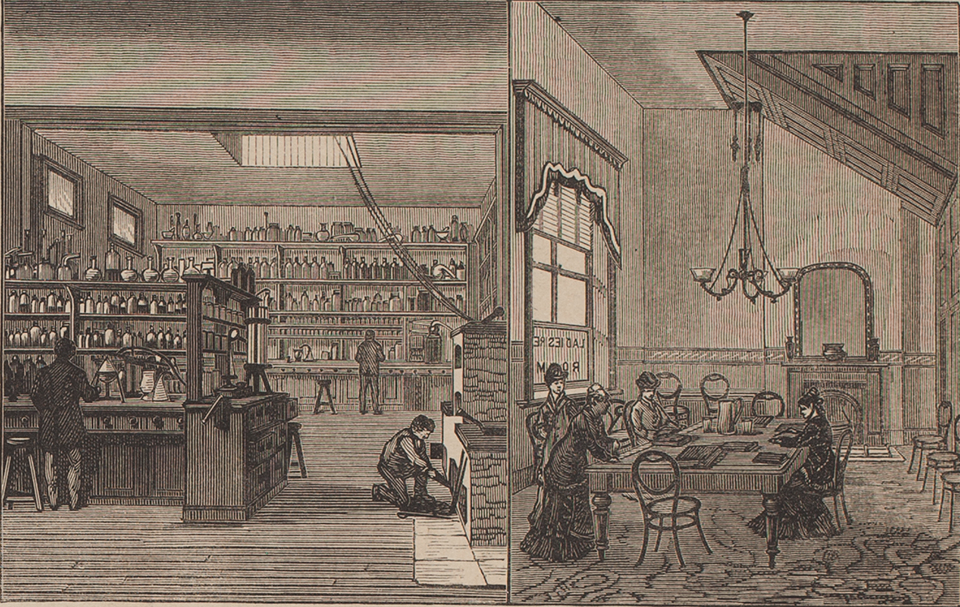 With the closure of the Working Men's College, the SMSA rooms returned to use as [media]reading rooms and library, with space for its debating club, theatrical productions and regular lectures and talks on a wide variety of subjects. The internal spaces were redesigned by architect John Smedley to increase the space available to members. Among these alterations, the [media]library, reading rooms, ladies room and chess room were extended, a new smoking room was added on the first floor, offices were combined, a stage added to Bibb's lecture theatre, a large lantern light installed in the ceiling of the first floor reading room, a lumber room added and extra accommodation provided for the caretaker. Excavations were also proposed for the installation of an electric motor to power the School's lighting. However when the government stopped leasing the SMSA hall for the new Technical College at the beginning of 1888, the loss of income to the School meant that this work did not proceed. [9] 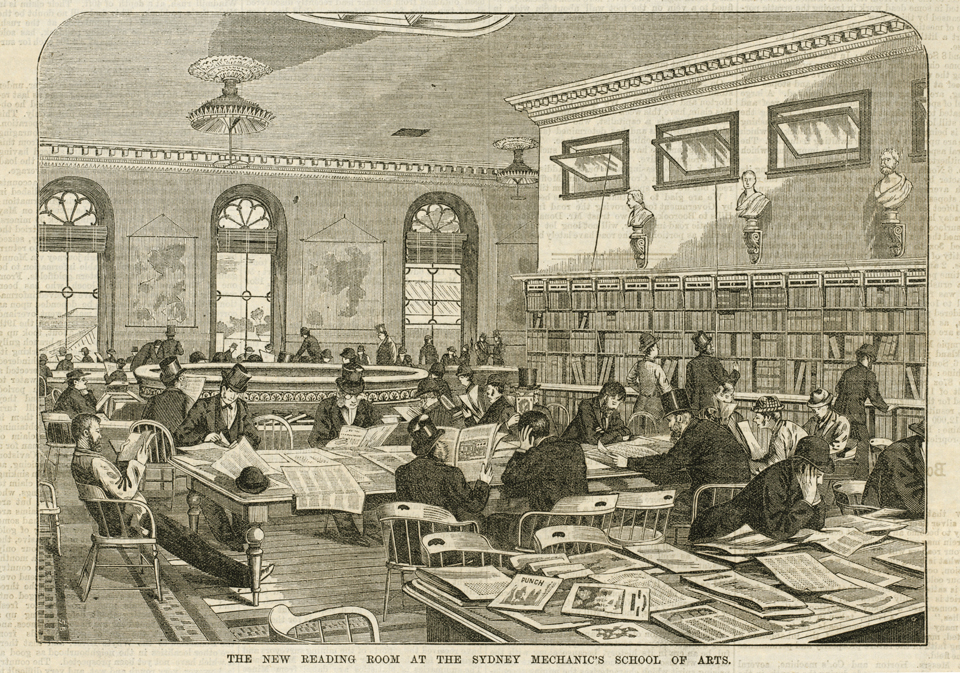 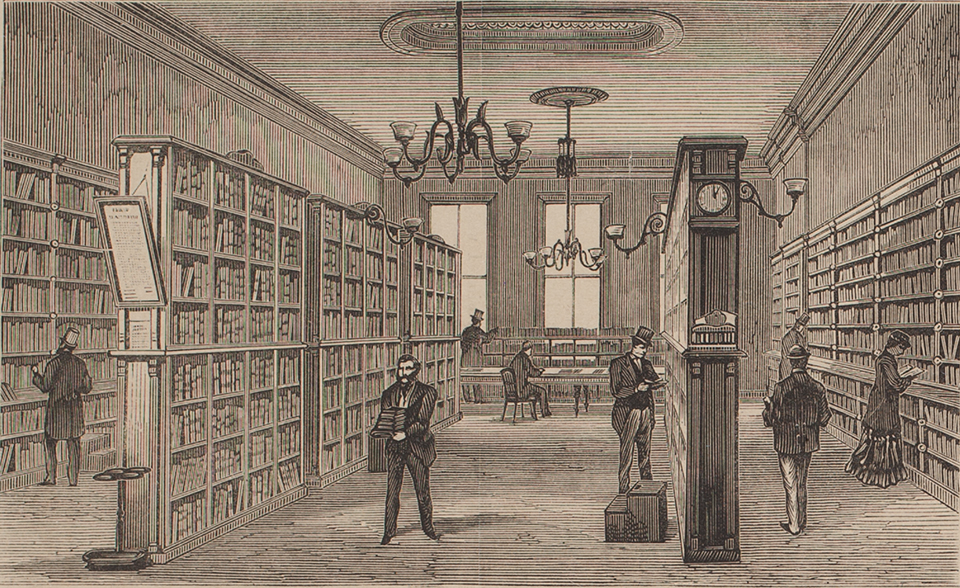 A continuing downturn in income saw further changes made to the SMSA building in a bid to improve finances. Between 1891 and 1894 the rents received by the SMSA fell from £1670 to £439 per annum. A number of dramatic proposals were put forward to counter this problem, including selling a portion of the site or installing shops into the front of the building. The decision to build shops was taken and in 1895–96 three shops were added to the front of the building on the ground floor in what had been the library and committee room. [10] The library was moved to the large hall.

This new configuration of the SMSA remained for nearly 100 years. Shops traded from the Pitt Street frontage and part of the first floor was rented to various organisations and businesses, such as the Public Service Association which had an office and an Assembly Hall in the building in the 1950s and 1960s. [11]

The shops [media]provided much-needed revenue for the SMSA which was otherwise in decline. Falling member numbers were accompanied by the withdrawal of state funding and vice-regal patronage by the 1930s. Although a large library was maintained, with the [media]library room itself being refurbished and modernised in 1977, the educational role of the SMSA had been effectively abandoned as state and federal institutions took over those functions. With falling cash reserves, by the early 1980s the SMSA found it increasingly difficult to maintain the building and began to consider selling the site. 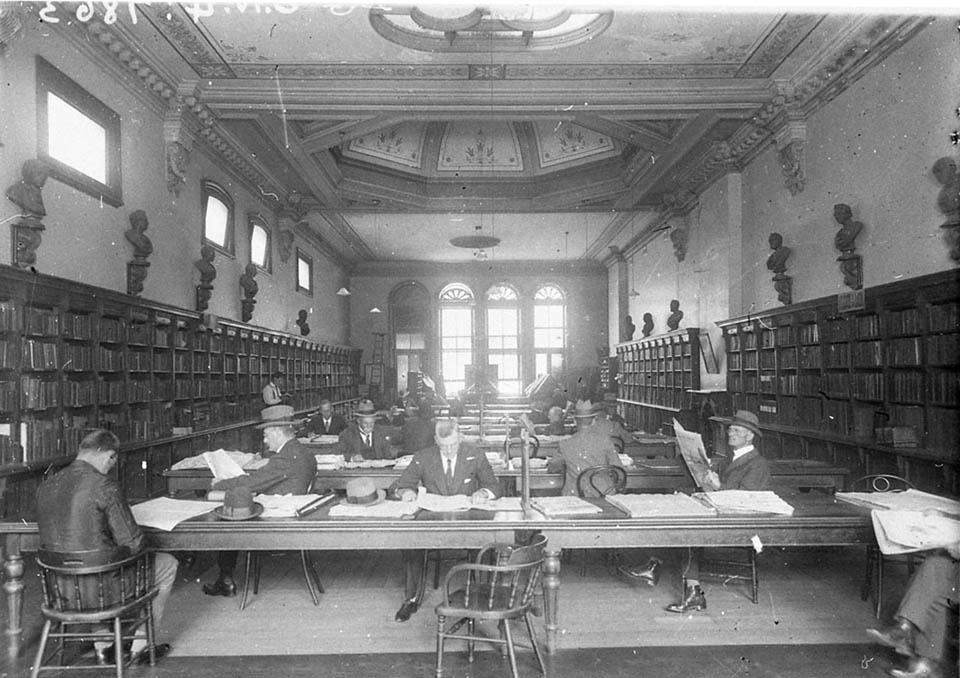 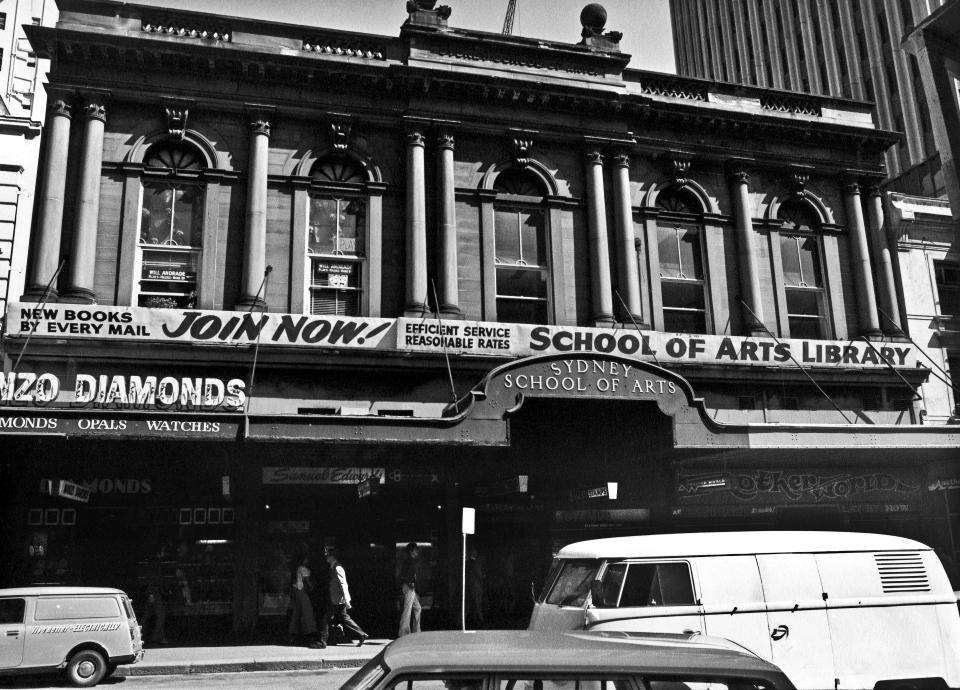 In 1984 the SMSA building was offered for sale as two separate lots, reflecting the historic allotment pattern that the building stood on. The [media]whole site was purchased by Alan Bond and Bondcorp who proposed to gut the building, retaining only the façade, and convert the remainder into a monorail station with a tower behind as part of the Park Plaza Project. The SMSA would be allowed to remain on site in a condensed form. Before any work could begin, Bondcorp collapsed and the mortgage was taken up by a Japanese consortium, Kumagai Gumi. With the future of the building now at stake, the New South Wales Heritage Office placed a Permanent Conservation Order on 275 Pitt Street in 1985. 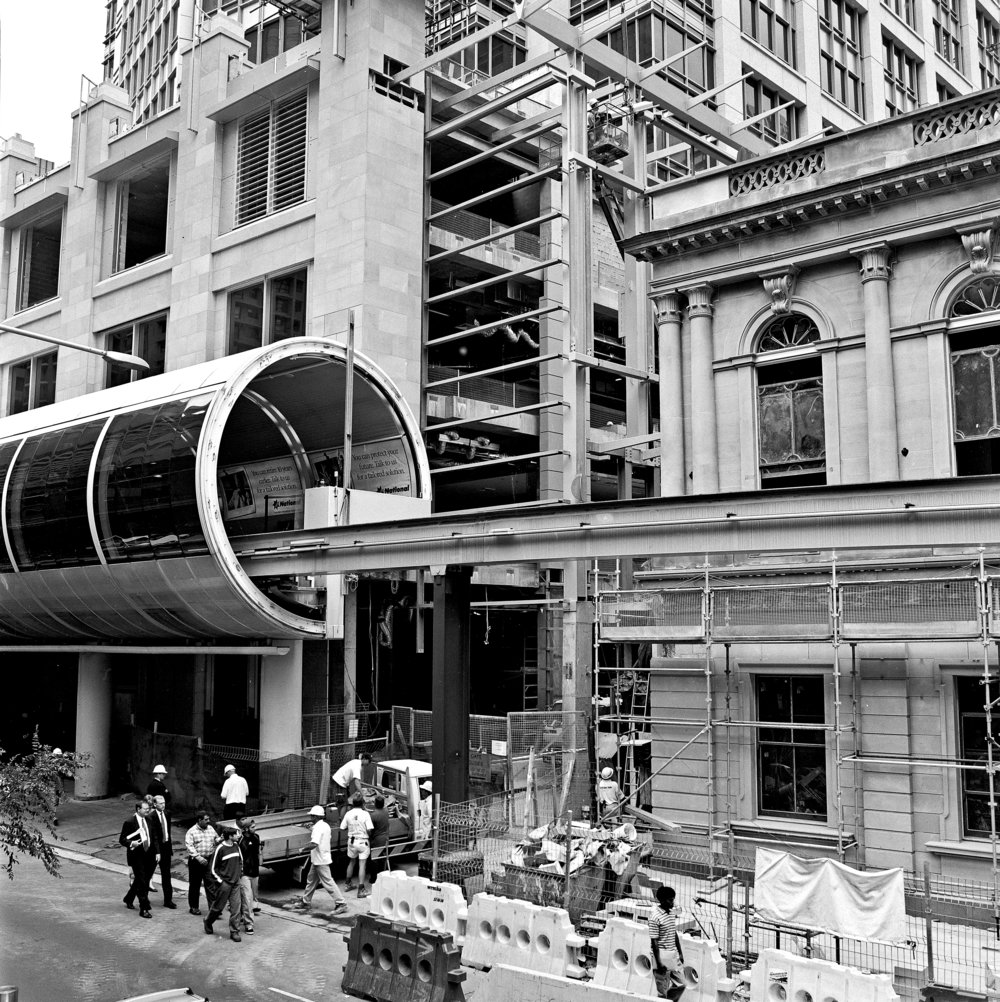 In 1988 the SMSA moved out of its original home to Town Hall House, the first of a series of temporary homes over the next 12 years. [12] Negotiations continued over the future of the building with a sale finally secured in 1996 to the Japanese consortium Kumagai/Sogo. The funds from the sale allowed the SMSA to purchase Lincoln House at 280 Pitt Street in 1996 and fit it out as a new home. In March 2000 the SMSA moved into its new headquarters.

In the meantime the former SMSA building was undergoing a transformation. As part of the new Galeries Victoria development, the former SMSA building was restored and repaired. Many of the original features of the reading rooms, library and halls, as well as the Independent Chapel, were retained in the new Arthouse Hotel which now occupied the buildings. The new managers included courses in drawing, photography and art as part of their program at the hotel, continuing a link with the cultural and educational programs that had been a focus of the SMSA. In 1999 the building was added to the State Heritage Register by the NSW Heritage Office.

[7] Technical or Working Men's College: Report from the Committee of Technical College of Sydney Mechanics School of Arts to the Honourable Minister for Public Instruction, 1881, Appendix A–D