Dorotea Alice Lucy (Doris) Fitton was [media]born on 3 November 1897 in Manila, the Philippines, but the family returned to Melbourne in 1902. The death of her father, Walter Fitton, two years later left his widow Janet in straitened circumstances. Doris Fitton trained as a stenographer but, aged 17, was also accepted as a student by Gregan McMahon in his Melbourne Repertory Theatre Company. 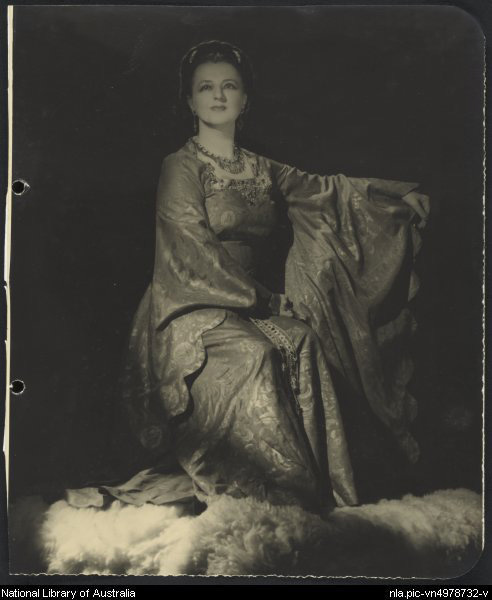 On her marriage to solicitor Norbert Keck ('Tug') Mason on 22 April 1922, she settled in Sydney. The elder of their two sons was born in 1924 and Fitton, while making the occasional stage appearance, regarded herself as retired from the theatre. Her career revived in 1927, with small roles for JC Williamson's and in 1929 she joined director and designer Don Finley in his newly formed Turret Theatre at North Sydney. She stayed with the company as performer and part-time secretary throughout its short life until 1930. On the demise of the Turret, Fitton organised 20 of its members to contribute ten shillings each as a working capital for the establishment of her city-based Independent Theatre.

It is as the founder of, and dominant influence upon, this Independent Theatre that Doris Fitton is best remembered and she became inseparable from it. Her initiative was a reflection of the movement in Europe in which theatre professionals sought ways of presenting works from both the literary classic repertoire and the evolving realist drama which were unlikely to be presented by commercial managements. In the Sydney context, Fitton's activities also acknowledged the fact that such a theatre could only function with the support of amateur performers.

Independent Theatre at the Savoy

Initially the group found a supporter who leased them rooms for £1 a week, then they moved to the small St James Hall. In January 1931 they settled in the newer Savoy Theatre in Bligh Street where, until 1937, they established a routine of eight productions a year. Fitton, as artistic director, perceived her first responsibility as establishing an audience, so they began with a Viennese comedy By Candlelight, but productions of both the classics and works by contemporary writers such as Elmer Rice and SN Behrman followed. Shows were frequently shoestring affairs, set against buff-coloured curtains, a style which was presented as innovative and experimental. On occasion though, Fitton used the appeal of large casts and spectacular presentation to attract full houses to shows which only the amateur stage could afford to present. These included Hugh McCrae's poetical and musical saga The Ship of Heaven, Flecker's Arabian Night's fantasy Hassan and the spectacularly successful and often revived 1066 and All That.

The move to North Sydney

The Savoy ceased to be available in June 1937 and for the next two years Fitton's theatre gave irregular performances at the Conservatorium of Music. In July 1939 Harald Bowden of Williamson's invited the company to experiment with a season at a theatre in North Sydney. They played to poor audiences but, for a cheap rental, Fitton's dislike of the building and fears of the effect on the subscription audiences of 'crossing the Bridge' were put aside. The move did lose the Independent much support, and the opening date of 3 September 1939 was inauspicious, but Fitton kept the theatre operating throughout World War II and, during that time, developed an involvement with the local community.

The 1940s and 1950s were the golden years for Fitton and the Independent Theatre. Memorable shows included her appearances in Schiller's Maria Stuart and in the 1948 production of Mourning Becomes Electra; Sumner Locke Elliott's Rusty Bugles provided a censorship cause célèbre; there was the challenging Dark of the Moon; the 'daring' love story Black Chiffon; and the newly translated Polish play Anna Lucasta. Fitton also continued her policy of encouraging Australian writers and, although these productions were often less than commercially successful, by 1967 the Independent Theatre had presented over 30 full-length new plays.

From the late 1950s Fitton adapted her artistic policy to include contemporary theatrical challenges. She also tried to take advantage of the emerging system of government subsidy to convert the Independent to a professional repertory company. These projects did not, however, prove viable, and from the middle of the 1960s the theatre was in financial difficulty. Over the next 10 years there were intermittent attempts to salvage the institution, but in 1977 the Independent Theatre as Fitton knew it finally closed. Her last production, a revival of Our Town, coincided with her eightieth birthday.

Fitton's later life had its difficulties. There were honours for her work, the OBE in 1955, CBE in 1975 and DBE in 1982, but her health was unreliable and she was not financially well off. She stayed as long as she was able in her home in Ridge Street, North Sydney, but after nursing care she died on 2 April 1985, aged 88 years. Few of the theatre community attended her small funeral at St Mary's Catholic church, close to the Independent Theatre.

Fitton's commitment to her Independent Theatre limited her engagement with other aspects of her profession. She began directing in 1930, and thereafter only occasionally appeared as a performer. She toured in 1955 for the Australian Elizabethan Trust in Medea and her last stage appearance was in 1974 in Stephen Sondheim's A Little Night Music. She made only one film, The Stowaway, in 1958. As a theatre administrator her only long-term association was with the Arts Council. Her opportunities for engagement with theatre outside Australia were also limited, although she did visit the Moscow Art Theatre, which she had taken as a model.

The intertwining of Fitton and the Independent was a source of both strength and weakness. For over 40 years she, through her theatre, was the principal provider of ongoing productions of both pioneering and classic theatre and of an outlet for local actors and playwrights. Under her control, the theatre fostered a Theatre for Children, supported a School of Dramatic Art and from 1954 a Theatre Workshop. Fitton was, however, a strong-willed woman who could be demanding and impatient and a formidable disciplinarian. The theatre was her creation, but there were limitations in that. Over time, her unfettered artistic control meant her theatre was not well prepared for dealings with government bureaucracy. The Independent relied on patronage and personal goodwill for much of its operation and there was always a social and recreational element around it. Fitton's training and thus her methods also indirectly reflected the tradition of the nineteenth-century actor manager, and her ways came to be seen as old-fashioned. In performance she was given to the 'grand manner', and as a producer she concentrated on stage delivery and technique. She did, however, have a flair for casting, often against physical type.

In private life she was a more rounded woman than her dedication to the theatre might indicate. Fitton was a loyal and close wife to her supportive husband and a devoted mother. She had an irrepressible sense of humour, was always gracious, was an enthusiastic ballroom dancer, had a flair for miming, a tendency to be unpunctual and she loved dogs. She was seldom seen in public without at least two pugs in tow. Actor and playwright Sumner Locke Elliott saw another distinctive quality: she had 'one of the most important attributes of a successful person … the ability to persuade people to do things for you'. It was a characteristic reflected in her achievements.