Australia's first regular postal service was instituted in Sydney in April 1809, when the former convict Isaac Nichols was appointed postmaster, a position he kept until his death in 1819. Nichols, whose George Street residence was used as the post office, was responsible for distributing parcels and letters arriving in Sydney and the rest of the colony.

In 1825, the recently restructured Legislative Council oversaw the regulation of postal services in NSW through the Postal Act 1825 which set postage rates, allowed postmasters to be appointed outside Sydney and paved the way for the establishment of a General Post Office. Three years later, a regular postal delivery service began, with postmen delivering mail throughout Sydney and to regional areas on horseback and by sea.

[media]A former police office on the present site of the General Post Office building was in use as a post office from the 1830s and, much like the GPO steps today, was an important meeting place. In the late 1840s, this building was given a portico façade, in the Greek Temple style, replete with Doric columns. Joseph Fowles, writing about the newly modified post office in 1848, considered it 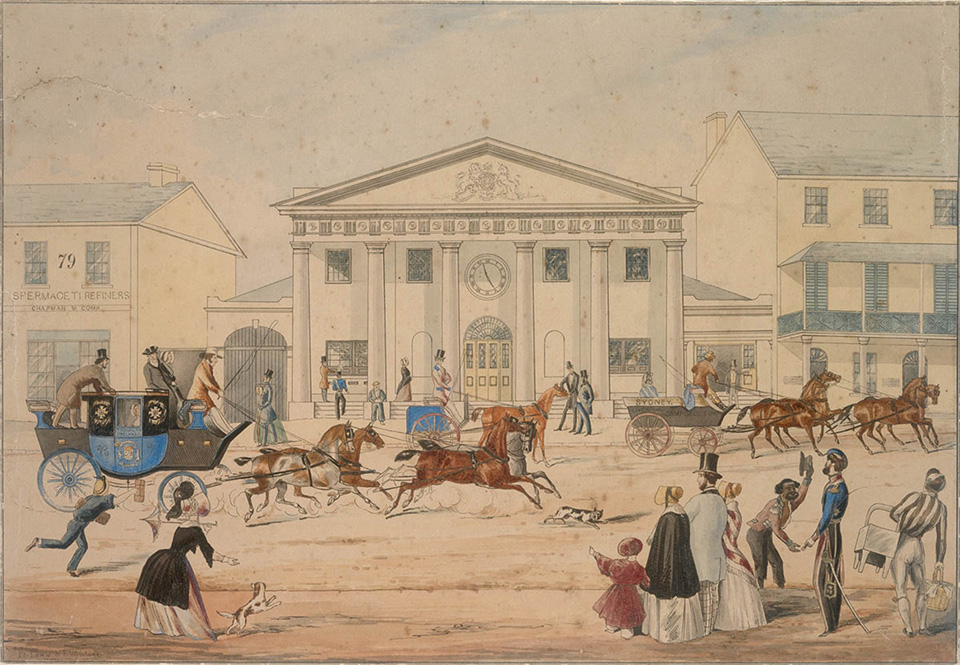 one of the most important buildings in the colony, not merely as regards the structure, but as being the centre and focus, the heart, as it may be termed, from which the pulse of the civilisation throbs to the remotest extremity of the land.

As the population of New South Wales and Sydney grew in the 1850s and 1860s, so did the demand for an improved postal service. The old post office became increasingly cramped as the functions and responsibilities of the postal service expanded. Although additions were hastily built to the rear of the main building, staff complained bitterly about its overcrowded conditions, as well as rising damp from the Tank Stream below.

After much deliberation, it was decided to rebuild on a larger scale on the same site, which required land to the east, bounded by Pitt Street. In 1862, the Colonial Architect James Barnet was appointed as the architect in charge of building the new post office. The existing building was demolished in 1863, and the postal service relocated to Wynyard Square, where it was housed in a 'temporary' building for the next 10 years.

[media]Barnet's General Post Office is his greatest contribution to the built environment of Sydney. Designed in the Italian Renaissance Palazzo style, with Florentine and Venetian elements, it was built of Pyrmont sandstone, with granite quarried at Moruya on the south coast of New South Wales used in the foundations and columns. 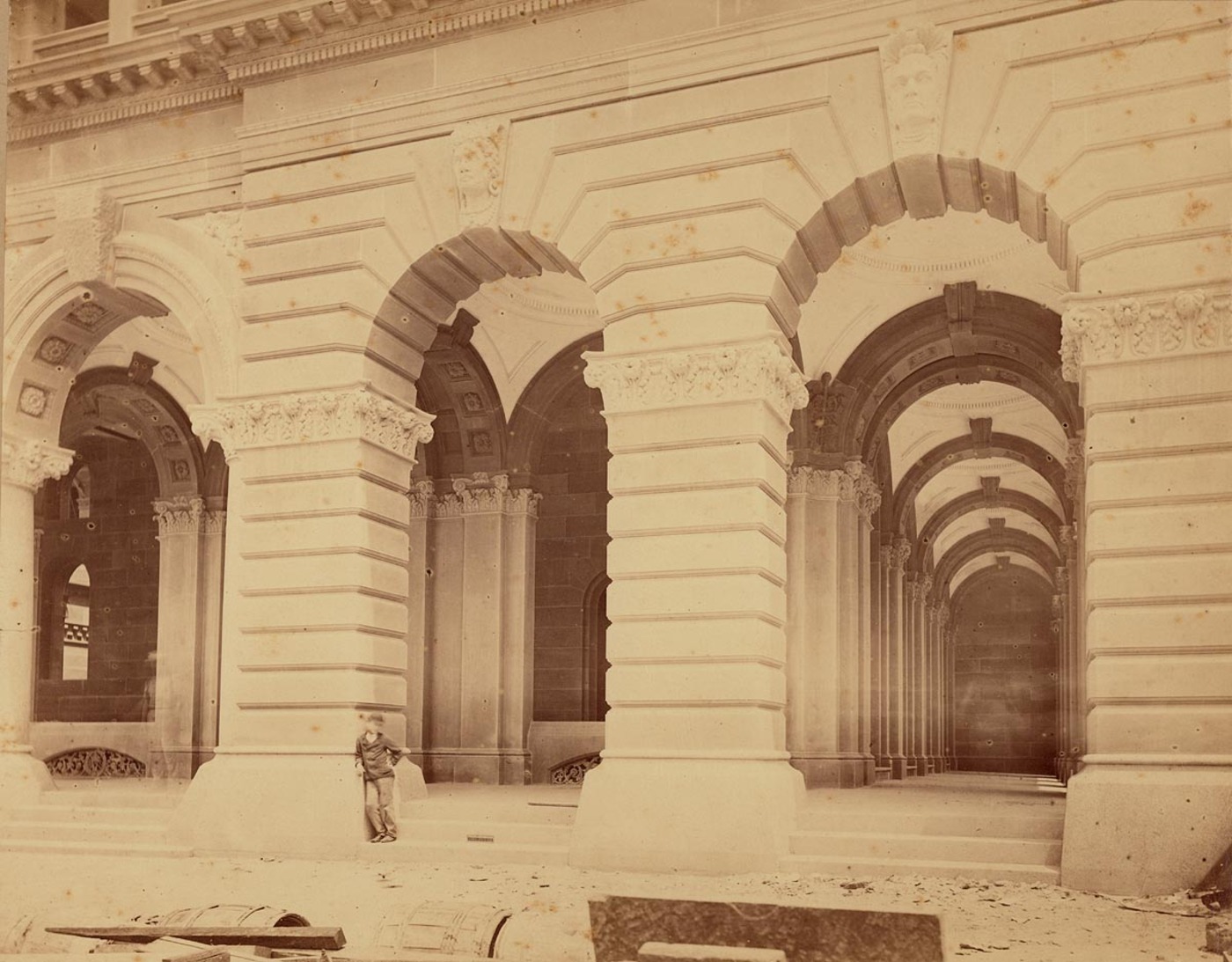 The building was constructed from 1866 to 1892 in two stages. The first stage was completed by 1874, having taken five years longer to build than anticipated, due to labour shortages and the difficulties of laying the foundations. The building straddled the Tank Stream, which ran south into Circular Quay, between the present alignment of George and Pitt streets.

The second stage of the General Post Office, referred to as the Pitt Street extension, was begun in 1879, with the design modified to incorporate a clock tower. The building was completed by 1889, with the clock tower completed two years later. As well as being a timepiece for the city, for many years the clock tower served a meteorological purpose, telegraphing weather messages from the South Coast through the use of mechanically operated, colour-coded flags. City workers would look up at the clock and calculate whether they could get home before a storm arrived or rain spoiled a clothesline full of washing. Sculptural details on the front of the building conformed to current fashion, but above the colonnades on the eastern façade a series of vernacular carvings depicting everyday events provoked controversy because they were considered to be in poor taste. The trustees of the Art Gallery were so outraged by this work that they avoided appointing Barnet as architect for the Art Gallery, instead turning to rival architect John Horbury Hunt. There was even an official enquiry that recommended removal of the offending work, but this instruction was ignored and in time the controversy subsided. Today no one notices these vernacular carvings or finds them offensive.

Barnet's colonnaded design was orientated to the north, and called for a grand public space in front of the northern elevation. Here there was only a narrow street called Moore Street. An act of parliament (the Moore Street Improvement Act 1890) allowed the City Council to demolish buildings on George Street and facing Moore Street, directly to the north of the post office, to make a wide roadway linking George and Pitt streets. This was named Martin Place in honour of Sir James Martin, politician and chief justice. East of Pitt Street, further building demolitions resulted in the gradual extension of Martin Place through to Macquarie Street by the 1930s.

During the nineteenth century, the functions of the General Post Office grew to encompass a telegraph department in 1867 and telephone services by the early 1880s. The arrival and departure times for shipping were posted there, and because it was the place where telegraphic information arrived, its role as a central city meeting place was assured. The prominent siting of the General Post Office, on the corner of George Street and Martin Place, reflects the importance of postal and telegraph communications in the nineteenth century.

In 1901 the Commonwealth government took responsibility for postal services throughout Australia. A Postmaster General's Department was formed in that year, which had responsibility for national mail and telephone services. About this time, an additional floor with a mansard roof was added to the General Post Office building. Further extensions and additions were made in 1927 and 1942. The main building was also modified in these years. [media]In 1927, the cedar and cast iron central staircase was removed and scrapped, and in early 1942 the clock tower was dismantled to reduce the visibility of the General Post Office and minimise its vulnerability to aerial attack during World War II. It was not replaced until 1964. Locating the Cenotaph in front of the GPO in 1929 made this a place for commemoration of wars, while the pedestrianisation of all of Martin Place in the 1970s enhanced its role as a gathering place for major public events. Events as diverse as Anzac Day services, political rallies and the annual arrival of Father Christmas at the city’s largest Christmas tree outside the GPO have kept the building central to Sydney’s social ways.

The PMG Department was in operation until 1975, at which time the responsibility for telephone and mail was separated through the establishment of the Australian Postal Commission (now Australia Post) and the Australian Telecommunications Commission (later Telecom, now Telstra). After the introduction of International Subscriber Dialing (ISD) in the 1980s, people no longer needed to line up on the Pitt Street side of the building to make overseas calls.

In the climate of economic rationalism and privatisation in the late 1980s, the charter of Australia Post changed, with a greater focus on commercial operations. Part of the General Post Office was sold, and the building converted for use as a hotel in the early 1990s. This conversion required the gutting of the interior of the building and the demolition of the two twentieth century additions to the rear of the building. The lower level of the former General Post Office contains a number of shops, bars and restaurants, but enough original features remain to give a sense of the earlier interiors. In the Tank Stream Bar there is a permanent exhibition about the history of the site, displaying some of the archaeological remains excavated during the conversion of the former post office for use as a hotel.

The new high-rise development within the envelope of the building was renamed No 1 Martin Place, but everyone still calls it the GPO.

The City's Centrepiece: The History of the Sydney GPO, Hale and Iremonger, Sydney, c1988