[media]Most Sydneysiders associate Mark Foy's with its impressive former home, now used as the District Court, covering almost a complete block of the city on the corners of Liverpool, Elizabeth and Castlereagh streets. But Mark Foy's first retail outlet in Sydney was a short stroll up the road, in Oxford Street. It was established in 1885 by Francis Foy and his younger brother Mark and named after their father, an Irish immigrant who had run a draper's store, first in Bendigo and then in the Melbourne suburb of Collingwood. [1] 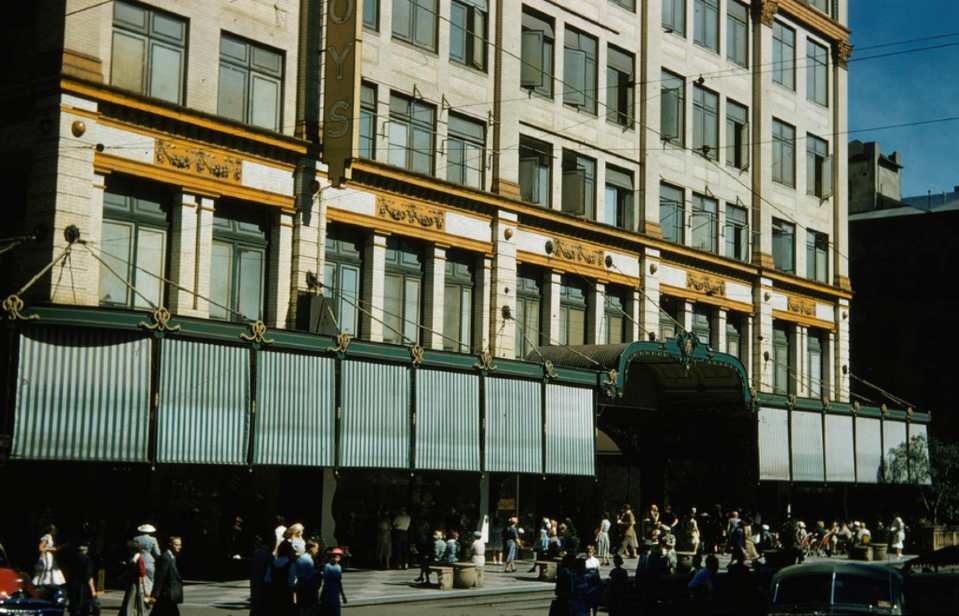 By the early 1880s, Mark Foy senior (1830–1884) had handed his Collingwood store over to his eldest son Francis. William Gibson entered the business soon afterwards but by 1884 the partnership was dissolved: Gibson retained the store, which became the well-known department store Foy & Gibson, and Francis Foy moved to Sydney.

The innovative and flamboyant Francis Foy drove the company in its first decades. The Oxford Street store was extended just two years after it was established, a London buying office was set up in 1890, and additional premises in Oxford Street were purchased in 1894. The ground floor of the new building was used as a furniture and carpet showroom while the upper floor became home to the company's first foray into manufacturing: men's clothing and women's underclothing.

Mark Foy's Fair, a sale usually staged twice a year, became a highly anticipated event on the Sydney shopping calendar. The sale and the store were initially noted for attracting a working-class clientele drawn both from those living in suburbs spreading east of the city and from the Irish-Australian community. The Foy family were also quick to emphasise their Irish roots in business and promotion. [2]

The store's competitiveness and low prices were at least partly achieved with the help of employees who worked some of the longest hours for the lowest rates of pay of any of the large Sydney stores. In 1885, employees worked until 10 pm on weekdays and 12 midnight on Saturday, these hours only being eased upon repeated protests from the Drapers' Association and the ensuing bad publicity. [3] The 1907 New South Wales Arbitration Court Shop Assistant's Case revealed the poor conditions of Mark Foy's shop assistants – the company employed a large proportion of young female staff largely because at the time they could be paid lower rates of pay than either males or employees with more experience. [4]

The profitability of the company and the ambition of the Foy family were to lead to bigger things: in 1909, Mark Foy's opened a massive new store, one of the largest in Sydney to that time. Known as 'The Piazza' and designed by architects Arthur McCredie & Arthur Anderson, the three-storey store (two floors plus basement) with turreted mansard roof was partially modelled on the grand Bon Marche department store in Paris. Alternative plans for the building had originally been drawn up by an English firm but were reconfigured after Francis Foy took Anderson with him to England, continental Europe and the United States, to see the latest developments in construction of commercial buildings. [5]

The new store included a number of innovations such as the first escalator in Australasia, alternatively called a travelling staircase or Escalier Hocquart, and a spiral chute which transported recently purchased parcels on a conveyor belt to a sorting and delivery office. With the additional space, the new building could accommodate a much wider range of departments and services, including an optician, a florist, grocery and jewellery departments, a pharmacy, a ladies' reading and writing room, a telephone bureau, a post box and a restaurant. An adjoining building housed workrooms for milliners and dressmakers as well as staff dining rooms. [6]

Business proved to be so brisk that an additional five-storey building was erected in 1913 on the eastern side of Liverpool and Elizabeth Streets to house the furniture and carpet departments, and then one year later yet another four-storey building was constructed across the road in Elizabeth Street for ironmongery and hardware – both buildings were also designed by architects, McCredie & Anderson. A knitting factory and bulk store designed by architects Spain Cosh & Dods was built nearby in Goulburn Street in 1920, the Target Woollen Mill was established in the Sydney suburb of Mascot in 1921, and a permanent building at the Moore Park home of the Royal Agricultural Society's Easter Show was erected in 1922. Finally, architects Ross & Rowe made considerable extensions to the main store in 1927–30, creating a six-storey building plus basement but keeping the exterior style sympathetic to the original. [7] The Ross & Rowe plan did, however, provide for the occupation of the whole block to Goulburn Street but this was not completed, possibly because of both ownership difficulties with the land and adverse financial conditions at the time. [8]

Mark Foy's benefited greatly from being located next to the Museum underground railway station constructed in 1926. Francis Foy had chosen the site well, the architects even making provision in their original 1908 design for a subway entrance to connect the station directly to the store. However, in a sign of changes to modes of personal transport, the Elizabeth Street hardware and ironmongery store was converted into a car park in 1934.

Mark Foy's became a public company in 1909 but until the early 1960s the board of directors was controlled largely by Foys and their Macken in-laws. Following Francis Foy's retirement in 1915, his younger brother Hugh Victor Foy became managing director. Mark Foy had retired some years earlier in 1898 to pursue other interests, including the building of the Hydro-Majestic health retreat and hotel at Medlow Bath in the Blue Mountains.

After recovering from the slowdown enforced by World War II, Mark Foy's enjoyed its most profitable year ever in 1954–55. Mark Foy's had a reputation among Sydneysiders for its displays and eye-catching window dressing. However, by the early 1960s, the company was in a very poor financial situation, suffering like many other large city retailers in that period from changes in demographics and shopping patterns. A new board of directors was elected in 1962, ending all Foy and Macken association with the company.

The 1960s were difficult for the company. The new board's attempts to improve the financial situation were two-fold. Firstly, there was a concerted move into suburban retailing – stores were established in Rockdale, Eastwood, Northbridge, Double Bay, Bankstown and Burwood. And secondly, there was the sale and lease of assets – the Target Woollen Mill was sold, the furniture store and a number of floors of the main Piazza building were leased. The later policy drew criticism from the Foy and Macken families, who claimed that the company was no longer a retailer but an 'investment company' whose profit was dependent on leasing of fixed assets. [9]

For a few years, the company remained profitable despite the large losses incurred by the Piazza building. Retailing in the southern end of the city, especially south of Park Street, was in very poor shape, with many large businesses closing during the 1960s. [10] Mark Foy's attempted to combat this by opening a store in King Street, but the company experienced its first loss since the 1930s depression in the 1966/67 financial year.

The company's financial woes proved too much and finally in 1968 Mark Foy's was taken over by another city department store, McDowells Ltd. By 1972, McDowells was in turn acquired by Waltons. The Piazza store traded under the Mark Foy's name until leased by Grace Bros in 1980. In 1983 Grace Bros closed its doors and retailing finally ceased at the Piazza building. [11]